NEW YORK — A woman was charged on Thursday with misdemeanor trespassing and disorderly conduct for climbing the base of the Statue of Liberty on a busy Fourth of July in what prosecutors called a “dangerous stunt.”

Court papers also charged Therese Okoumou with resisting arrest by refusing to leave her perch by the bottom of the statue’s robes, about 100 feet above ground. Police were forced to scale the statue to pull her down.

Okoumou allegedly “staged a dangerous stunt that alarmed the public and endangered her own life and the lives of the (New York Police Department) officers who responded to the scene,” U.S. Attorney Geoffrey S. Berman said in a statement.

Okoumou, 44, of Staten Island, was expected to appear in federal court in Manhattan later Thursday. If convicted, she would face up to six months behind bars on each count.

The name of her lawyer wasn’t immediately available.

The National Park Service decided to evacuate more than 4,000 visitors from Liberty Island on Wednesday “out of an abundance of caution,” said spokesman Jerry Willis. Average attendance for the Fourth of July is 20,000 to 25,000 people, he added.

A federal official said the woman told police she was protesting the separation of immigrant children from parents who cross the U.S.-Mexico border illegally. The official wasn’t authorized to discuss it and spoke on the condition of anonymity. 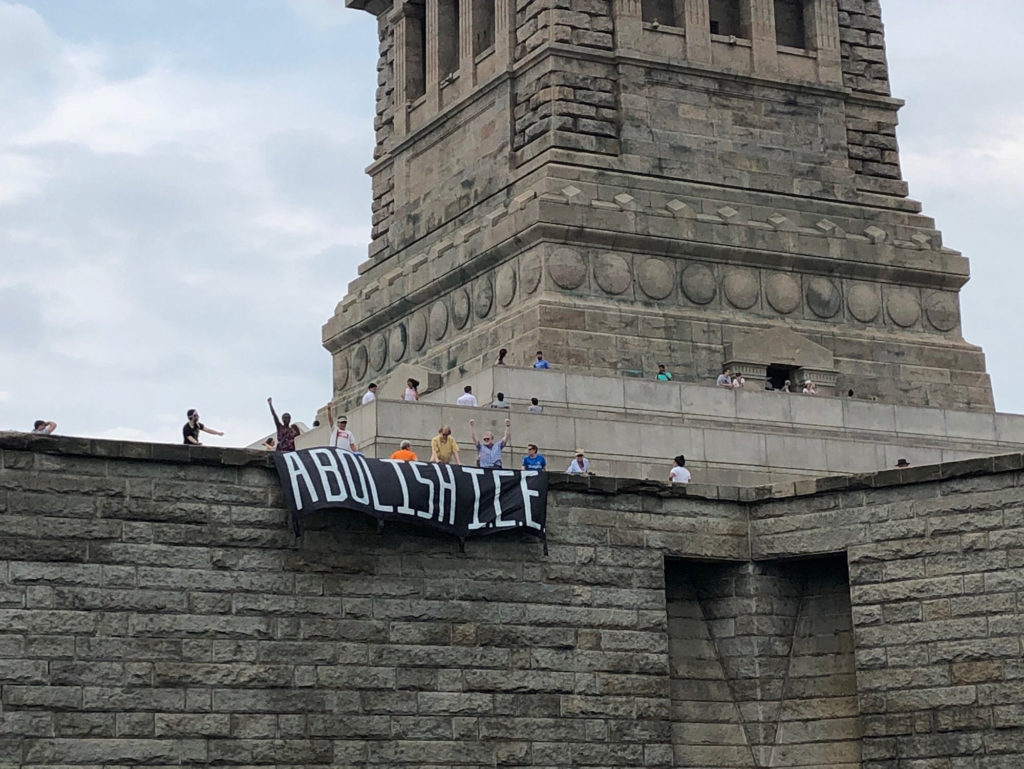 The group Rise and Resist stage a protest at the Statue of Liberty in New York, U.S. July 4, 2018 in this picture obtained from social media. Photo by Rise and Resist/via Reuters

The park service was reviewing security videotape to try to determine how the woman made the climb, Willis said. It also was taking a closer look at the statue to see if there was any damage, though that’s unlikely, he said.

The copper-pounded skin is only the thickness of two pennies but “it’s strong,” he said.

“That statue has been out in the middle of New York Harbor for 130 years — with hurricanes and lightning and everything that nature has thrown at her,” he said. “She’s survived quite well.”

Left: A protester is seen on the Statue of Liberty in New York, New York, U.S., July 4, 2018, in this picture obtained from social media. Photo by Danny Owens/via Reuters