LOS FRESNOS, Texas — Gabriel Canas, a bus driver from El Salvador who fled his homeland after members of MS-13 stormed his bus, did an initial screening interview for asylum under the worst circumstances.

He hadn’t spoken to his 9-year-old daughter since the Border Patrol separated them two weeks earlier. And in that time, he had been moved repeatedly from one detention facility to another.

“The day I had my interview, I wasn’t well because they’d taken my daughter away. I was worried sick. I didn’t know where she was. I hadn’t spoken to her,” Canas told a judge at the Port Isabel Detention Center in Texas, where parents of many of the more than 2,000 children who were separated under the Trump administration’s “zero tolerance” policy await their fate.

His case illustrates an overlooked effect of the separations: Some immigrants complain that they stumbled through their first asylum interviews when they were deeply distraught over losing their children. The interviews can have life-changing consequences because they are critical to establishing why families cannot return home safely.

Not until a day after the interview did Canas learn through a lawyer what happened to his child. The asylum officer who conducted the interview issued a deportation order. On Monday, an immigration judge upheld it.

The judge cited new Justice Department guidelines that gang violence is not sufficient grounds for asylum. But Canas blames his poor interview and plans to seek another one.

The interviews can have life-changing consequences because they are critical to establishing why families cannot return home safely.

Volunteer lawyers say parents are distressed about losing their children and having no firm date for when they will reunite, putting them at a big disadvantage when they meet with asylum officers from the Citizenship and Immigration Service.

The so-called credible-fear interviews at Port Isabel take place by phone within two to four weeks of a parent’s arrest and last 45 to 90 minutes each, according to immigration attorney Jodi Goodwin. Getting an answer can take a week.

To clear the initial hurdle, asylum seekers must demonstrate a “significant possibility” that they can prove that they have been persecuted or have a well-founded fear of persecution on grounds of race, religion, nationality, membership in a social group or political opinion if they are returned home.

They are judged partially on the consistency of their statements to border inspectors at the time of arrest. Attorneys say many asylum seekers, usually speaking through translators, fumble their interviews by holding back on details that may help their cases.

The risks of the interviews don’t trouble immigration hard-liners. Many of them see the asylum process as a joke, saying it invites fraud by migrants who exaggerate claims and exploit loopholes to get into the U.S. When legal groups talk about flubbed interviews or asylum seekers who need to be coached through the process, hard-liners see evidence that migrants are rehearsing from a script. 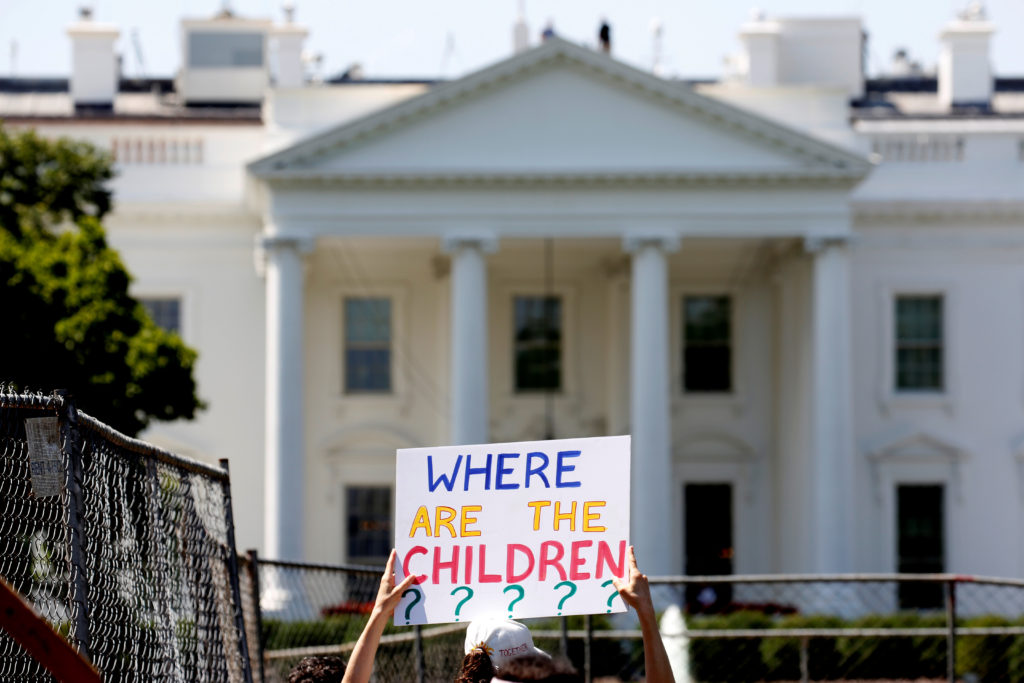 An immigration activists hold signs against family separation during a rally to protest against the Trump Administration’s immigration policy outside the White House in Washington, U.S., June 30, 2018. REUTERS/Joshua Roberts

“The first thing he said to the asylum officer was: Do you know where my daughter is?” said Sepulveda, who found the girl in Arizona after she was transferred there from Chicago.

After President Donald Trump ordered an end to the separations on June 20, border authorities generally stopped splitting up families for prosecution. But many at Port Isabel were arrested before Trump reversed course and are still separated. A federal judge in San Diego ruled last week that families must be reunited in 30 days, or 14 days if the children are younger than 5 years old.

Many of the parents have already been interviewed. Goodwin, who spearheads a network of volunteer lawyers, estimates that her attorneys had counseled about 210 separated parents at Port Isabel by the end of June. Most of them — about 150 — had already been through initial interviews.

Among those parents, more than half had talked to their children by phone. But they typically knew only that the children were in a government shelter and maybe the state or city where it was.

More than 3 out of 4 asylum seekers passed the screening from October to January, according to the latest published statistics. That approval rate may fall after Attorney General Jeff Sessions’ decision to declare that domestic and gang violence are generally not sufficient grounds for asylum.

In Canas’ case, the immigration judge cited the June 11 order from Sessions.

“It’s not that I think that your fear is illegitimate,” Judge Morris Onyewuchi said. “But the cops I must follow have ruled that gang extortion, gang recruitment are not grounds for asylum.”

Citizenship and Immigration Services said it asks every asylum seeker if they feel comfortable proceeding and, if not, the interview is rescheduled.

“All applicants are asked about their health, to include their mental health and have the opportunity to discuss that issue as well as any issue that might impact their case with the interviewing officer. Our supervisors are directed to reschedule cases pending concerns that the applicant might have,” the agency said in a statement.

The advocacy group Kids in Need of Defense sent volunteer attorneys to Port Isabel this week with the goal of counseling parents before their initial screening.

“We are talking to people who are distraught because they don’t know where their children are and they’re facing a complex, potentially life-or-death interview,” said Wendy Young, president of the group. “To have to face a complicated legal proceeding when you’re so focused on the safety of your child, I can’t imagine what that feels like.”

Canas, who was separated from his daughter at the Texas border, hopes to be reunited with her and to join his legal-resident parents and U.S. citizen sister in the U.S. His chances are poor, Sepulveda said, but he will seek a fresh asylum review.

“The purpose of coming here was to save my life and my daughter’s life,” he said. “That’s all.”

Left: Asylum seekers wait on the Mexican side of the Brownsville-Matamoros International Bridge near Brownsville, Texas, last month. Some asylum seekers say concerns over being separated from their children impacted their first asylum interviews. File photo by REUTERS/Loren Elliott

The ordeal of navigating migrant family reunification, in one toddler’s story