PANAMA CITY, Fla. — Supercharged by abnormally warm waters in the Gulf of Mexico, Hurricane Michael slammed into the Florida Panhandle on Wednesday with potentially catastrophic winds of 155 mph, one of the most powerful storms ever to hit the U.S. mainland.

The brute quickly sprang from a weekend tropical depression, becoming a furious Category 4 by early Wednesday, up from a Category 2 less than a day earlier.

“I’ve had to take antacids I’m so sick to my stomach today because of this impending catastrophe,” National Hurricane Center scientist Eric Blake tweeted as the storm — drawing energy from the Gulf’s unusually warm, 84-degree water — grew more scary.

More than 375,000 people up and down the Gulf Coast were urged to evacuate. But emergency authorities lamented that many people ignored the warnings and seemed to think they could ride it out.

Diane Farris, 57, and her son walked to a high school-turned-shelter near their home in Panama City to find about 1,100 people crammed into a space meant for about half as many. Neither she nor her son had any way to communicate because their lone cellphone got wet and quit working.

“I’m worried about my daughter and grandbaby. I don’t know where they are. You know, that’s hard,” she said, choking back tears. 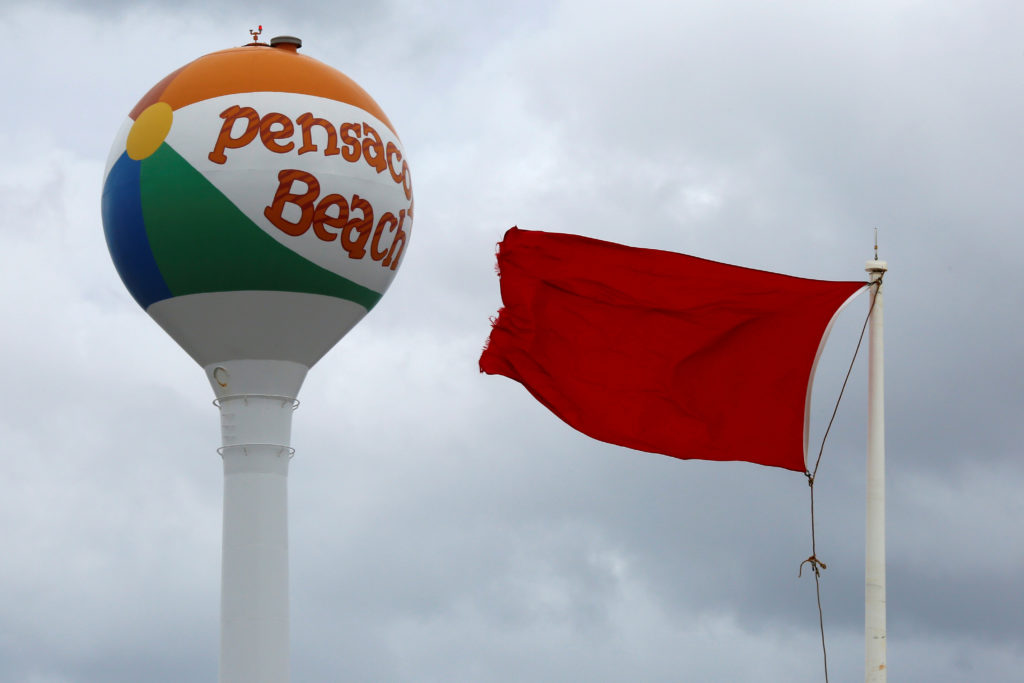 A red flag, warning of dangerous conditions, is seen in advance of Hurricane Michael in Pensacola, Florida. Photo by Jonathan Bachman/Reuters 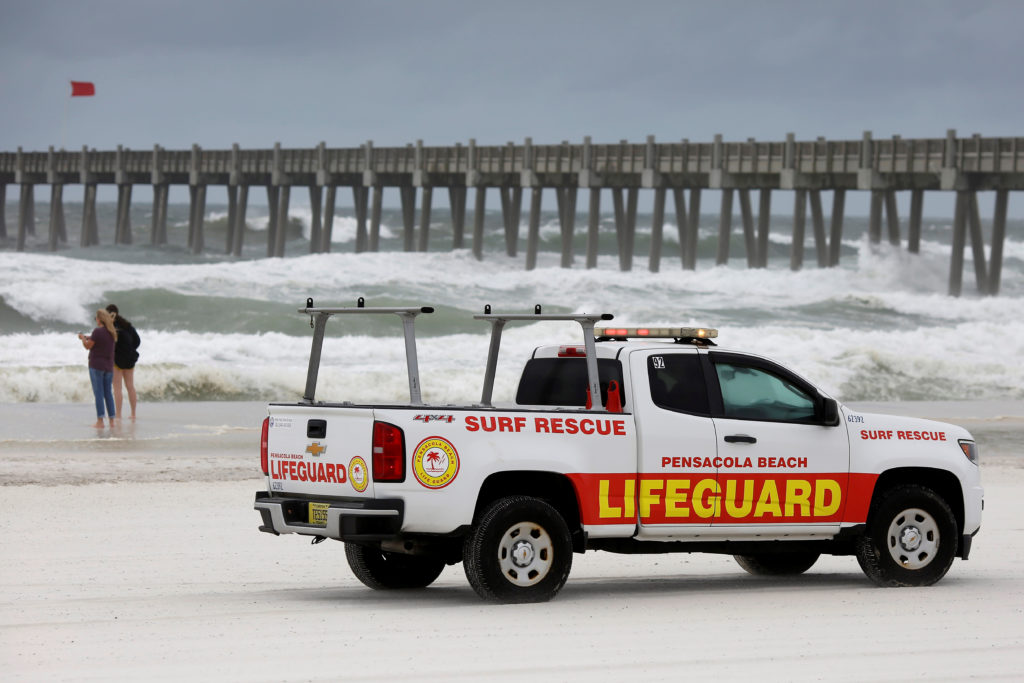 Lifeguards patrol the beach in advance of Hurricane Michael in Pensacola, Florida. Photo by Jonathan Bachman/Reuters

Hurricane-force winds extended up to 45 miles (75 kilometers) from Michael’s center. Forecasters said rainfall could reach up to a foot (30 centimeters), and the life-threatening storm surge could swell to 14 feet (4 meters).

The storm appeared to be so powerful that it is expected to remain a hurricane as it moves over Georgia early Thursday. Forecasters said it will unleash damaging wind and rain all the way into the Carolinas, which are still recovering from Hurricane Florence’s epic flooding.

“We are in new territory,” National Hurricane Center Meteorologist Dennis Feltgen wrote on Facebook. “The historical record, going back to 1851, finds no Category 4 hurricane ever hitting the Florida panhandle.”

Colorado State University hurricane expert Phil Klotzbach said in an email: “I really fear for what things are going to look like there tomorrow at this time.”

Scientists say global warming is responsible for more intense and more frequent extreme weather, such as storms, droughts, floods and fires. But without extensive study, they cannot directly link a single weather event to the changing climate. 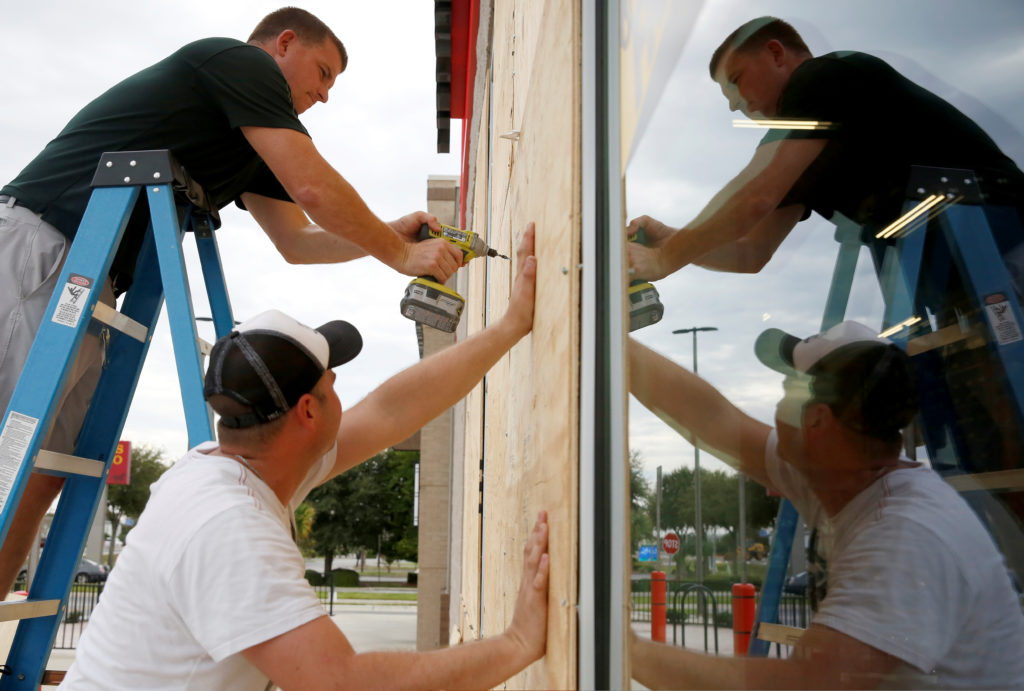 Justin Davis, left, and Brock Mclean board up a business in advance of Hurricane Michael in Destin, Florida. Photo by Jonathan Bachman/Reuters

With Election Day less than a month away, the crisis was seen as a test of leadership for Scott, a Republican running for the Senate, and Tallahassee Mayor Andrew Gillum, the Democratic nominee for governor. Just as Northern politicians are judged on how they handle snowstorms, their Southern counterparts are watched closely for how they deal with hurricanes.

Hours ahead of landfall, seawater was already lapping over the docks at Massalina Bayou near downtown Panama City, and knee-deep water was rising against buildings in St. Marks, which sits on an inlet south of Tallahassee, Florida’s capital.

Huge waves pounded the white sands of Panama City Beach, shooting frothy water all the way to the base of wooden stairs that lead to the beach.

More than 5,000 evacuees sought shelter in Tallahassee, which is about 25 miles from the coast but is covered by live oak and pine trees that can fall and cause power outages even in smaller storms.

Only a skeleton staff remained at Tyndall Air Force Base, situated on a peninsula just south of Panama City. The home of the 325th Fighter Wing and some 600 military families appeared squarely targeted for the worst of the storm’s fury, and leaders declared HURCON 1 status, ordering out all but essential personnel.

The base’s aircraft, which include F-22 Raptors, were flown hundreds of miles away as a precaution. Forecasters predicted 9 to 14 feet of water at Tyndall.

Evacuations spanned 22 counties from the Panhandle into north-central Florida.

“We’ve told those who stayed to have their life jackets on when the storm comes,” Tress Dameron, Franklin County emergency management coordinator, told The News Herald in Panama City.

In St. Marks, John Hargan and his family gathered up their pets and moved to a raised building constructed to withstand a Category 5 after water from the St. Marks River began surrounding their home.

Hargan’s 11-year-old son, Jayden, carried one of the family’s dogs in a laundry basket in one arm and held a skateboard in the other as he waded through calf-high water.

Hargan, a bartender at a riverfront restaurant, feared he would lose his home and his job to the storm.

“We basically just walked away from everything and said goodbye to it,” he said, tears welling up. “I’m freakin’ scared I’m going to lose everything I own, man.”

Left: A local couple, who asked not to be named, watch waves come ashore in advance of Hurricane Michael in Pensacola, Florida. Photo by Jonathan Bachman/Reuters