Suicide among teens and young adults reaches highest level since 2000

The rate of U.S. adolescents and young adults dying of suicide has reached its highest level in nearly two decades, according a report published today in the Journal of the American Medical Association.

With more than 6,200 suicides among people aged 15 to 24, suicide ranked as the second-leading cause of death for people in that age group in 2017, trailing behind deaths from unintentional motor vehicle accidents, which claimed 6,697 lives.

To study the change, a team from Harvard Medical School pulled data from the Centers for Disease Control and Prevention, which tracks deaths and their “underlying cause” nationwide.

Suicide rates among females have been on the rise for several years in this time period, with the rates for 15- to 19-year-olds rising more quickly after 2009. An even more noticeable spike has occurred in suicides for adolescent and young adult males since 2014.

The researchers said that trend might be connected to the opioid crisis, because of the added stressors that come with addiction, said Oren Miron, a research associate at Harvard Medical School and one of the report’s authors.

Social media, as well as reduced stigma for parents and coroners to report a child’s death as suicide (rather than as an accident), could also be playing a role in the increase, the researchers suggested.

But Miron cautioned that the study did not identify causes. Instead, they say that now the upward trend has been identified, more research can be done to pinpoint the factors contributing to the deaths. 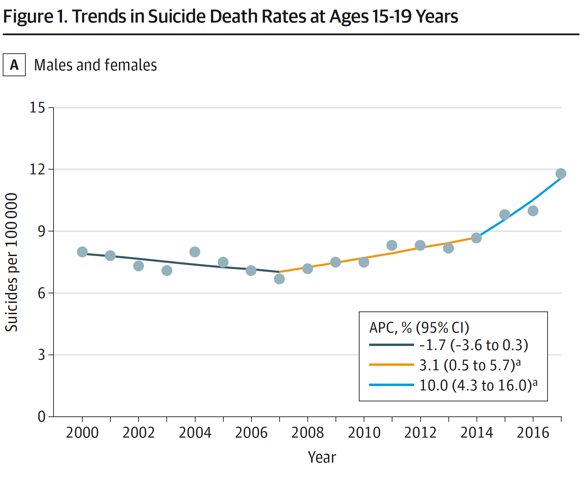 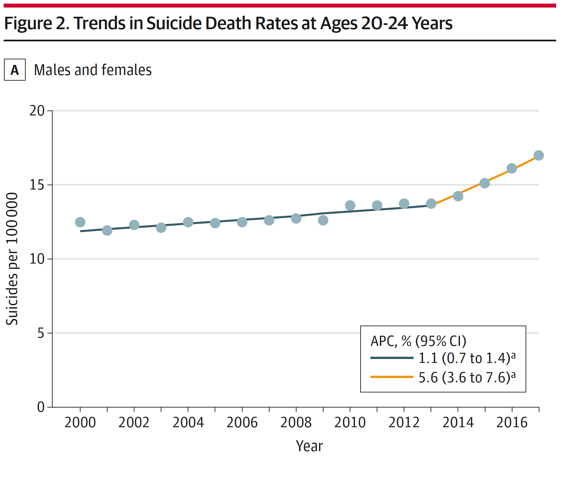 A leap in the suicide rate “is not a predetermined curse that comes with modernization,” said Miron, noting the fluctuation from year to year.

The CDC has linked increased drug use to suicides and recommends a number of prevention measures, including encouraging adults to limit access to prescription drugs in the home. And experts in suicide prevention say paying attention to changes in lifestyle can help parents determine if their child is at risk.

For adolescents, using social media in a way that detracts from face-to-face interactions could be particularly detrimental to mental health. said Victor Schwartz, chief medical officer at suicide prevention nonprofit The Jed Foundation.

Yet while social media can facilitate bullying and lead to more anxiety and depression among young people, it can also be used to help those who are struggling with depression, and can help loved ones pick up on warning signs early on.

“Dramatic changes are a sign,” said Schwartz. “Looking for changes in sleep, in social relationships — any of these big areas should start to raise big flags. Changes in substance use, even in the use of social media might suggest something is going on.”

If you or someone you know has talked about contemplating suicide, call the National Suicide Prevention Lifeline at 1-800-273-8255, open 24 hours a day, seven days a week.

Left: Data from the CDC shows teen and young adult suicides are on the rise, although researchers are not certain of the cause.