This may sound obvious, but a new study makes it clear: Don’t use recipes you find online to make homemade sunscreen.

When researchers surveyed recipes for do-it-yourself sunscreens on the social network Pinterest, they found almost 70 percent of the recommended recipes offered insufficient sun protection. These concoctions put users at risk of sunburn and long-term skin damage that could lead to cancer, according to a study published Monday in Health Communication.

Pinterest — which works as a series of virtual bulletin boards — has a user base of mostly women with a median age of 40 and a strong community of mothers with young children looking for health advice, the researchers said. But previous studies have found the health content on Pinterest skews toward anti-vaccine content, unscientific material or alternative therapies like herbal medicine.

“Parents want to do well by their children,” said study author Lara McKenzie, an injury researcher at Nationwide Children’s Hospital in Columbus, Ohio. “The current movement toward organic and natural stuff is coming from a good place — I get that. But in some instances, and in this case in particular, this route could be detrimental and risky for kids.” 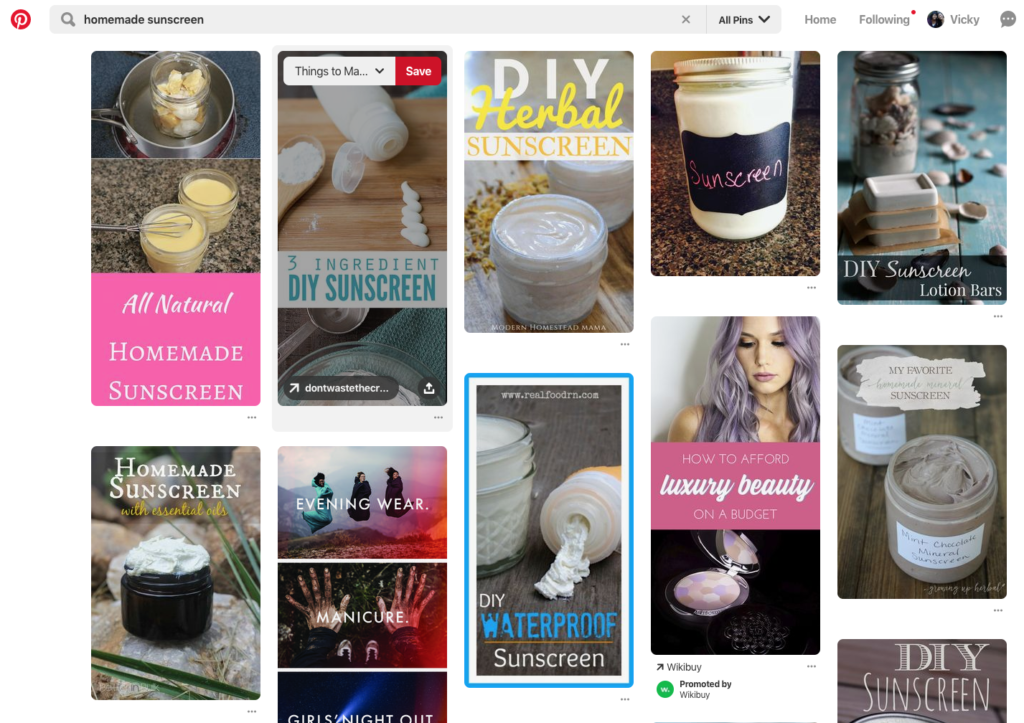 Pinterest links to recipes and recommendations for homemade sunscreens, which researchers say are unsafe and ineffective. Screenshot via Pinterest

On Pinterest, users can create “pins” by saving links to photos, infographics or external websites to their own personal boards, or by reposting pins made by others.

Over two days in December 2017, the team searched Pinterest for “homemade sunscreen” or “natural sunscreen.” They found 1,000 pins and then picked out every fifth one they encountered to create a random sample, rather than only focus on the top results.

They cataloged 189 pins in all. Each pin was sorted into a series of categories, based on their popularity, whether the recipe advertised itself as easy to make or particularly health-conscious, and the accompanying imagery. For example, they recorded if the pins included images of the homemade sunscreen, nature or children.

Ninety-five percent of the collected pins portrayed homemade sunscreens in a positive light. Most also included a recipe for viewers to make at home, often involving coconut oil, essential oils, shea butter, beeswax and zinc. Some of the pins had been saved just a few times, and others more than 21,000 times.

Why these homemade recipes don’t protect your skin

Many of the sunscreen pins made unsubstantiated claims about their recipes’ sun protection factor, or SPF — a measurement of a sunscreen’s ability to block damaging ultraviolet light from a user’s skin. A third of the pins listed protective ratings — ranging from SPF 2 to SPF 50 — though most said their recipes ranked above SPF 30, the recommended dose for sunscreen. All of these pins lacked verifiable proof.

Making a sunscreen is no easy task, said Sherry Pagoto, a health psychologist from the University of Connecticut, who was not involved in this study. “If you’re just making it in the bathroom, nobody is going to test what you made.”

Without laboratory validation, signs of sun damage on sensitive skin are the only ways to tell if the sunscreen works.

That is, until you try it out on yourself or your child. Without laboratory validation, signs of sun damage on sensitive skin are the only ways to tell if the sunscreen works.

Other cited ingredients like zinc oxide and titanium oxide can be protective, but their at-home use can be flawed. Incorporating them evenly into any mixture can be difficult, the researchers said. Commercial sunscreens, mixed by machine, don’t have this issue.

Why this study matters

“There’s been mixed [news coverage] about sunscreen lately that has cast doubt on it, I think unfairly,” Pagoto said.

On May 6, a study led by the U.S. Food and Drug Administration concluded that some ingredients in commercial sunscreens can be absorbed into the bloodstream. It did not, however, find that those ingredients were harmful. Instead, the report — which only had 10 subjects — identified which common sunscreen ingredients filter into the body and then recommended more research to determine if they could cause any harm.

“But that nuance isn’t always captured by the public,” Pagoto continued. “You’d still be hard-pressed to find a dermatologist who doesn’t recommend you wear sunscreen.”

The rise of social media has paralleled a growing mistrust of commercial health products and a preference for products labeled “natural” and “organic,” Pagoto said. Pinterest and other social media sites like Facebook, YouTube and Instagram have tried to take action against vaccine misinformation, one symptom of the overall trend. They’ve had mixed results, as pins and posts still slip through filters, sometimes racking up thousands of views.

These pins — and other types of home-grown health advice — are just eminently clickable, the researchers contended.

“The ones that have a picture of a child getting the sunscreen put on them — that makes me really nervous,” McKenzie said. “I feel like that’s pulling at the heartstrings.”

To combat that clickability, established health care institutions like the FDA, Centers for Disease Control and Prevention, and the American Academy of Dermatology will need to speak out on social media and meet parents where they already look for health advice, the scientists argued.

“We can’t be silent and let bloggers have the floor,” McKenzie said.

The FDA, CDC and the AAD all recommend that anyone who intends to get out in the sun this summer should wear a relatively thick layer of FDA-approved sunscreen — SPF 30 or higher, broad-spectrum and water resistant — on all exposed skin, and re-apply at least every two hours.

Left: Homemade sunscreens aren't tested for effectiveness, so many recipes found on social media can't back up the claim that they can protect sensitive skin from damage. Image by The Dabblist/Flickr