Surviving the Holocaust as a ‘hidden child’ in Athens

It was shortly before Passover in 1944 when 6-year-old Solomon Kofinas saw his father and sister for the last time.

The war had taken its toll on Athens, where Kofinas grew up, since the invasion by Germany’s Nazi forces three years earlier.

There was no money. Families bartered for bread. Kofinas’ father, who sold men’s suits, traded clothing to keep the family fed. “Give them a shirt, get a little flour,” Kofinas said. “Give them some socks, get maybe a couple of eggs.” 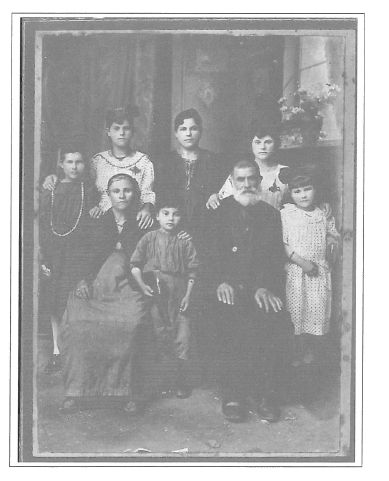 The Kofinas family is shown in this undated photo, courtesy of Kehila Kedosha Janina. Sol Kofinas, who shared his story with PBS NewsHour, is not pictured in this photo.

He recalled one day when his father, Haim, unexpectedly brought home a young chicken, the first the family had seen in years. He tied its leg with a string so it wouldn’t fly away. “We hoped it would give us an egg or something,” Kofinas said. But finally, he said, the family became so hungry they killed the chicken for food.

One Friday, his mother, Rachel, asked his father and 15-year-old sister, Perna, to go to the market in advance of Shabbat, the Jewish day of rest traditionally observed from sunset on Friday until Saturday evening.

By then, the Germans had issued an edict advising Jewish families to register at the Melidoni Street synagogue in central Athens. Nazi forces said families who registered would be given handouts, including flour and sugar rations.

Hoping for the possibility of food or supplies, Kofinas’ father added his name to the list. It was a decision that would cost the family four lives. 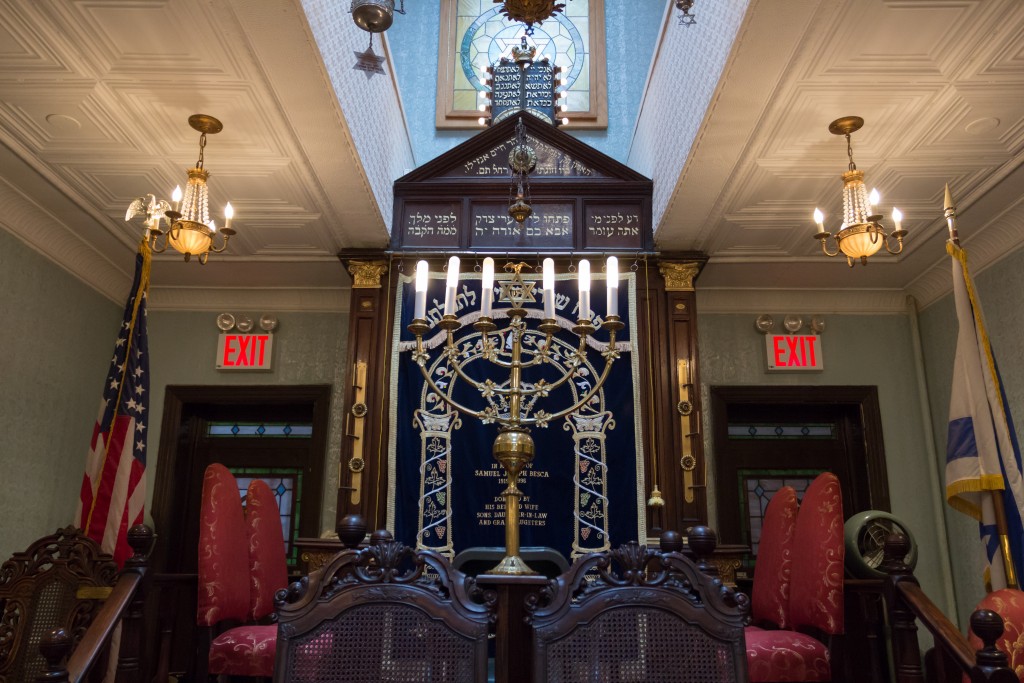 The interior of the Kehila Kedosha Janina. Photo by Shawn Paik/PBS NewsHour

Kofinas shared his story with PBS NewsHour at Kehila Kedosha Janina in Lower Manhattan, a unique temple believed to be the last Greek Jewish synagogue still standing in the Western Hemisphere.

The synagogue was founded in 1927 by 50 “Romaniote” Jewish families who had settled in Manhattan’s Lower East Side. At its peak, the temple had more than 300 families.

Romaniote Jews are Greek-speaking Jews originally from Ioannina, a small, isolated city in northwestern Greece where Kofinas’ parents were born. The group has its own traditions, steeped in centuries-old Greek culture, including a unique style of chanting “piyutim,” the Jewish liturgical poems recited during services. Their Torahs are housed in distinctive shields called “tikim,” crafted to protect the scrolls on long travel through desert climates.

“As Jewish people, the one thing that kept us together throughout history was the Torah,” said Marvin Marcus, who serves as the temple’s president. “It’s this uniqueness in us as Jews that kept us going all these years.”

Though the number of families who attend the synagogue has dwindled over the years, Kofinas and others return to the temple on Saturdays and the Jewish High Holidays. 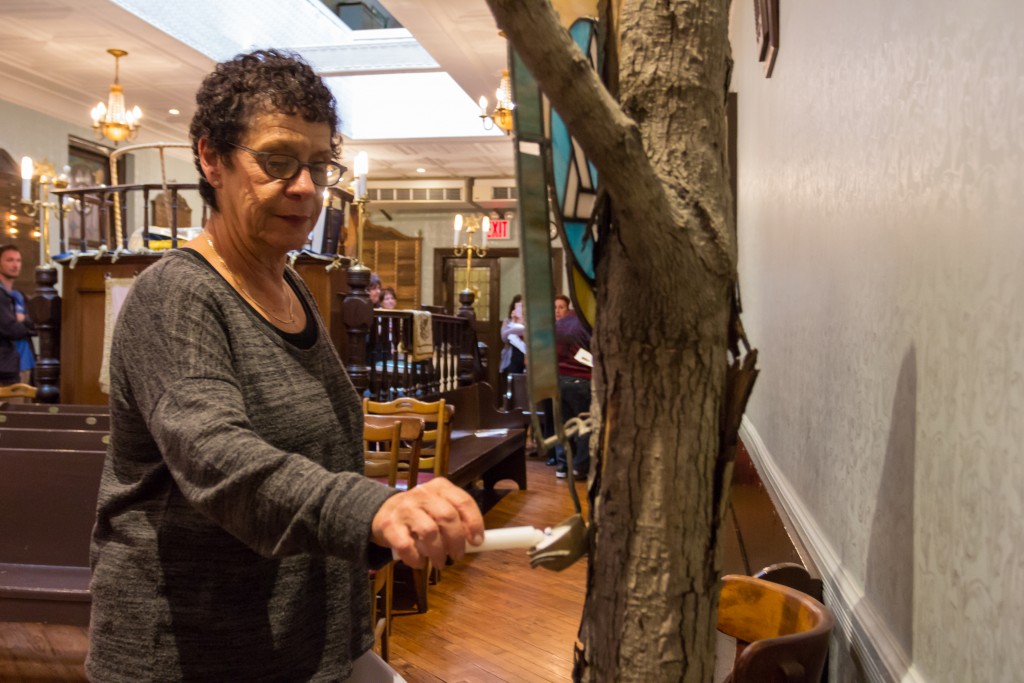 Alice Matsas Blecker lights a candle in remembrance of the victims of the Holocaust during the Yom HaShoah service at the Kehila Kedosha Janina in on May 1. Photo by Shawn Paik/PBS NewsHour

On May 1, congregants held a special service in advance of Yom HaShoah, the official day of remembrance of the six million Jews killed during the Holocaust.

The nearly two dozen in attendance lit candles and recited the mourner’s kaddish, a prayer to commemorate the dead. Many wept.

“The Holocaust was not six million,” said the synagogue’s museum director Marcia Haddad-Ikonomopoulos. “It was one, plus one, plus one.”

This year, the congregation at Kehila Kedosha Janina paid special tribute to Orthodox Christians in Greece who risked their lives to help Greek Jews survive the war.

“If you were caught hiding a Jew it was a death sentence,” Haddad-Ikonomopoulos said. “There are those of our own congregants who were saved as hidden children and others who are here today, because their parents were saved due to the moral courage of their fellow Greeks.”

Kofinas was one of those so-called “hidden children.” Seated on the temple’s original benches from the 1920s, he shakes his head, recalling a painful past. “I grew up without parents,” he said. 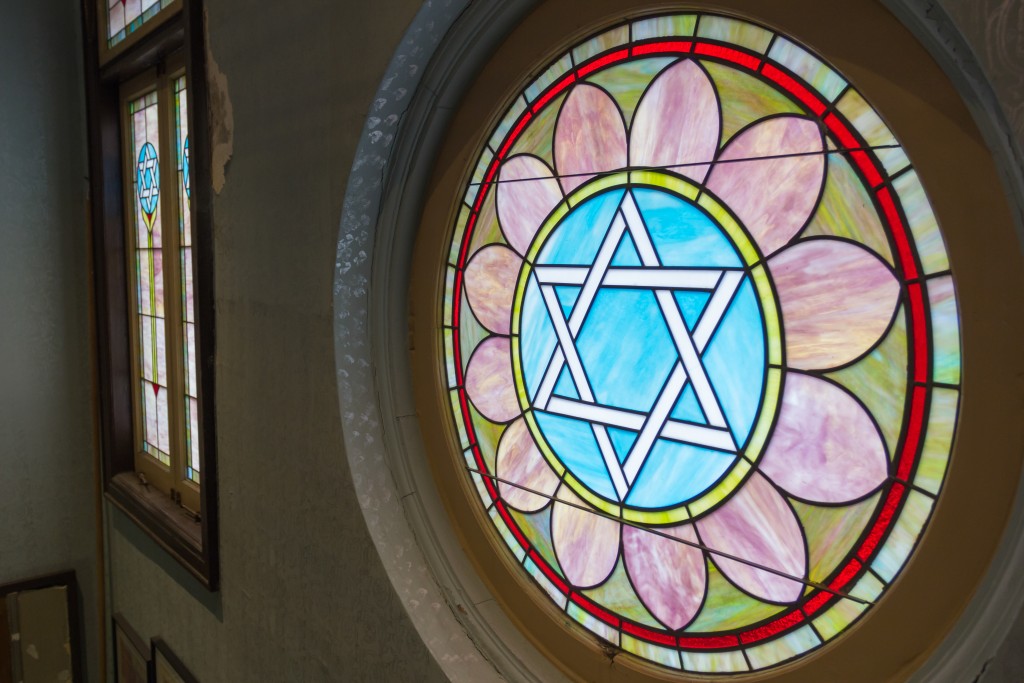 He remembered that Friday in 1944, when he watched his mother grow more and more panicked as the hours ticked by without word from his father or sister.

Later, he said, a young man ran through the neighborhood warning families that the Nazis were rounding people up.

Young Kofinas didn’t know it then, but his father and sister are believed to be among hundreds of Jews inside the Greek capital’s central synagogue on March 23, when the Gestapo sealed its doors, trapping anywhere from 300 to more than 700 people, according to estimates by Yad Vashem, the World Center for Holocaust Research, Documentation, Education and Commemoration.

The Jews detained on Melidoni Street were brought to the temporary Haidari concentration camp outside of the city. Many were ultimately sent to the Auschwitz-Birkenau Extermination Camp in Poland. Between 60,000 and 70,000 Greek Jews were killed in the Holocaust, mostly at Auschwitz-Birkenau, according to Yad Vashem.

Back at his home, Kofinas’ mother felt she and her three sons could not wait for instructions that might never come. The family was registered. The Germans would know exactly where to find them.

Kofinas’ mother sought refuge for Sol, his 14-year-old brother Zino and her infant son Tsadikos in the shop of a nearby tailor, who allowed the family to sleep on a mattress on the shop’s floor. But the family had little food and no diapers for the baby. When she returned home to collect supplies, she was found by the Gestapo, Kofinas said.

As she was being detained, his mother cried out for Tsadikos, Kofinas said a neighbor later told him.

“She was screaming, ‘I want the baby, I want the baby,'” he said. A neighbor brought the baby to her, but her older sons fled. Kofinas never saw the rest of his family again. 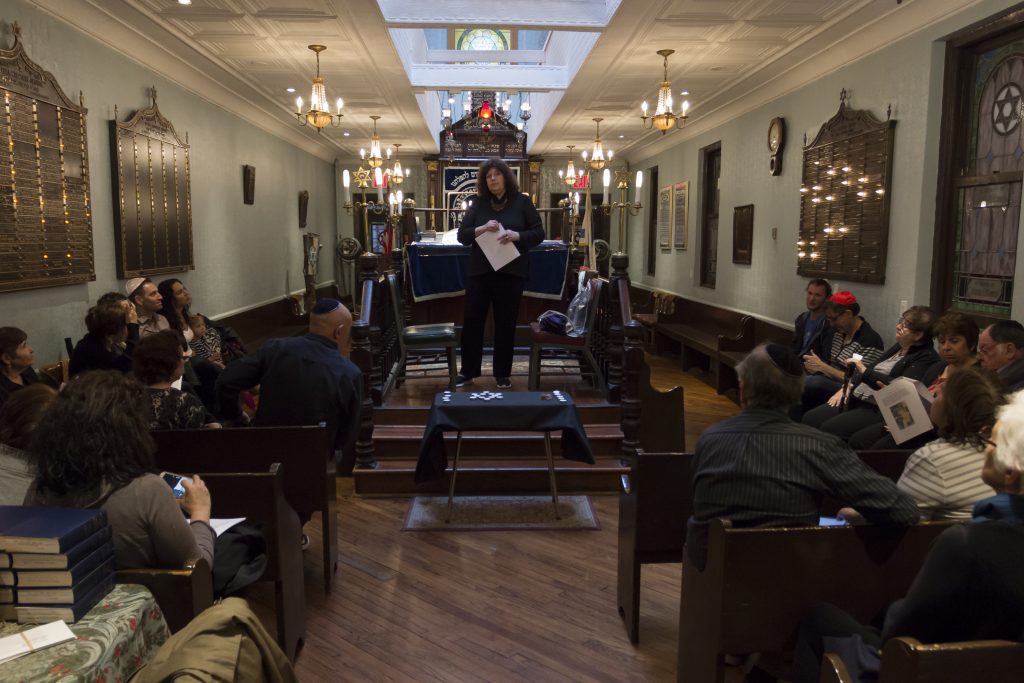 Marcia Haddad-Ikonomopoulos speaks at a service in remembrance of the victims of the Holocaust at Kehila Kedosha Janina on May 1. Photo by Shawn Paik/PBS NewsHour

Kofinas’ parents and siblings were among the tens of thousands of Greek Jews killed by the Nazis. The country lost at least 81 percent of its Jewish population during the Holocaust, according to the United States Holocaust Memorial Museum.

Fleeing Athens, the young brothers moved from house to house until, as Kofinas recalls, they came to a town outside the city, where they stumbled upon the place they would wait out the war. A yard with a small hut used to store wood.

“The lady says, ‘I can’t put you in my house but you can stay over there in the yard… You tell my neighbors you are my nephew and the Germans burned your village up in the north country,'” Kofinas said.

Each day, his brother returned to the city, where he sold cigarettes to the German troops. Kofinas stayed in town, playing with children in the neighborhood.

He said he was approached by mothers in the town who wanted to care for him, but he refused their help for fear of being discovered. “The ladies used to say, ‘Come in the house, I will give you a bath. Like my own kids,'” he said. He declined, knowing they would discover that he was circumcised and find out he was Jewish.

The brothers lived in that woodshed until the war ended. “Me and my brother survived,” Kofinas said.

Kofinas immigrated to the United States in 1955, joining others from Athens who had already established a tight-knit community in Manhattan.

The teenagers, “all newcomers,” went to the movies together or took trips to Coney Island, bound by a common Greek language and experience.

It was through this group that he met his wife, Koula. She was also a “hidden child” of the war, posing as a Christian girl in Larissa, a city in the country’s Thessaly region. 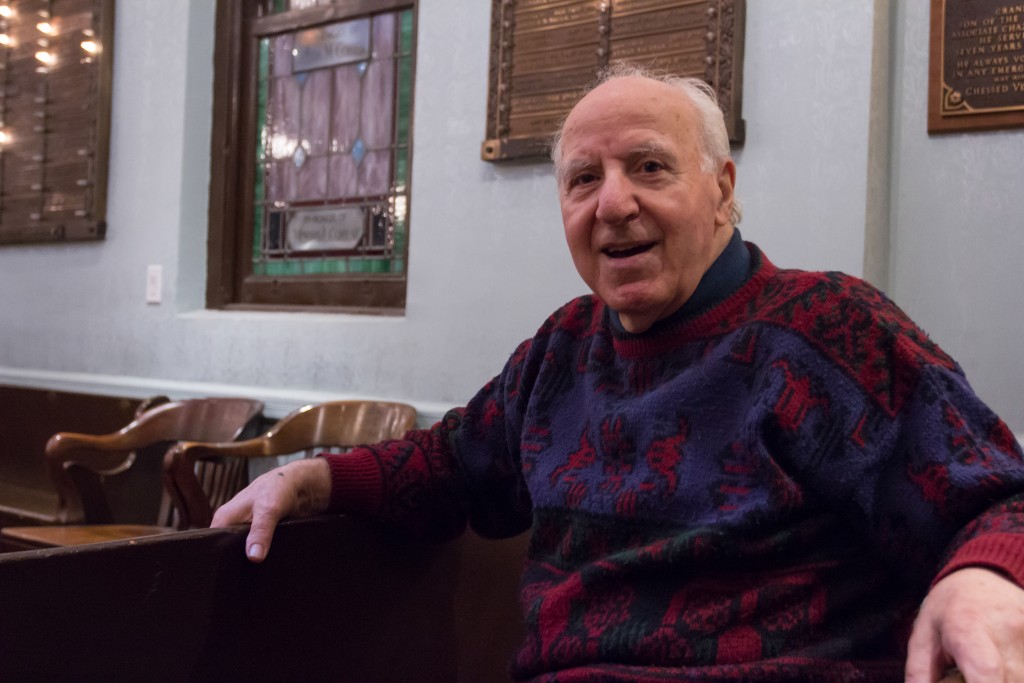 Solomon Kofinas, known as Sol, is seen in this photograph taken prior to the  Yom HaShoah remembrance service at the Kehila Kedosha Janina in New York City on May 1. Photo by Shawn Paik/PBS NewsHour

Today, the Lower East Side has changed. Kehila Kedosha Janina is just one of three remaining synagogues in an area that had more than 400 at its peak.

Attending services is important to Kofinas. When his children were young, he sent them to yeshiva schools, where students study traditional religious texts. “Because I never had the chance to go to school to learn Jewishness and everything, I want my kids to learn Jewish life,” he said.

Last month, Kofinas and his wife celebrated the birth of their first great-grandchild, Stella Hannah.

So much has changed in the decades since Stella’s great-great-grandparents were sent to Auschwitz-Birkenau and lost to history, Kofinas said, but other things have stayed constant, like the temple community that welcomed him when he first arrived in New York.

Tucked between a poultry warehouse and a Chinese-owned glass shop, “the last Greek Synagogue” stands strong. And Kofinas and his family will be there for services on Saturday morning, to celebrate the Sabbath in homage to those Jews born in Ioannina long ago.

“We act like a family, and we are a family,” Haddad-Ikonomopoulos said.

Left: Solomon Kofinas and his wife, Koula, light a candle in remembrance of the victims of the Holocaust during the Yom HaShoah service at synagogue Kehila Kedosha Janina in New York City on May 1. Photo by Shawn Paik/PBS NewsHour