The man accused of killing eight people and injuring at least a dozen others by intentionally driving a truck into bicyclists and pedestrians along a path on Halloween in lower Manhattan has pleaded “not guilty” to murder and terrorism charges in federal court.

An attorney for Sayfullo Saipov, a 29-year-old legal immigrant from Uzbekistan, entered the plea Tuesday during Sapiov’s arraignment in Manhattan federal court before U.S. District Judge Vernon Broderick, who did not set a trial date. Saipov could face the death penalty if he is found guilty of the charges, though it’s not clear whether federal prosecutors will seek it, as they did in the case of Boston Marathon bomber Dzhokhar Tsarnaev.

The hearing in the historic Thurgood Marshall U.S. Courthouse occurred less than half a mile from the Oct. 31 truck attack. Saipov wore a blue jail uniform, listened to the proceedings through an Uzbek translator, and said only one word — “yes” — when the judge asked if he understood the charges against him.

Saipov, who used a rented Home Depot truck to carry out the attack, was shot by police after his truck collided with a school bus. Later, the FBI said that in an interview with agents at Bellevue Hospital, Saipov said he planned his attack for two months and choose Halloween because he expected there would be more civilians on the street than other days.

“Saipov’s depraved use of a rental truck as a weapon of terror was allegedly in support of the terrorist organization ISIS,” Joon Kim, the acting U.S. Attorney for the Southern District of New York, said in a written statement announcing the indictment. “Like many terrorists before him, Saipov will now face justice in an American court.”

Saipov appeared in the same courtroom, 318, where federal prosecutors have made a case against the perpetrators of the 1993 World Trade Center attack, which killed six people, a foiled plot to bomb bridges and tunnels tied to the late “Blind Sheik,” Omar Abdel Rahman, and the 1998 twin truck bombings of U.S embassies in Kenya and Tanzania, which killed 224 people, including 12 Americans.

This is the first time the federal racketeering statute, the Racketeer Influenced and Corrupt Organizations Act (RICO), has been used in a major terrorism case brought in New York, Jim Margolin, a spokesman for the Southern District, told PBS NewsHour. It’s also the first time RICO — which is usually employed in organized crime cases — has been used in any of the 135 ISIS-related prosecutions in the U.S since 2014.

The Saipov indictment describes the Islamic State’s terrorism “enterprise” whose “leaders, members, and associates engaged in racketeering activity,” including plots to kill Americans abroad and in the U.S. as part its goal to establish an Islamic caliphate. 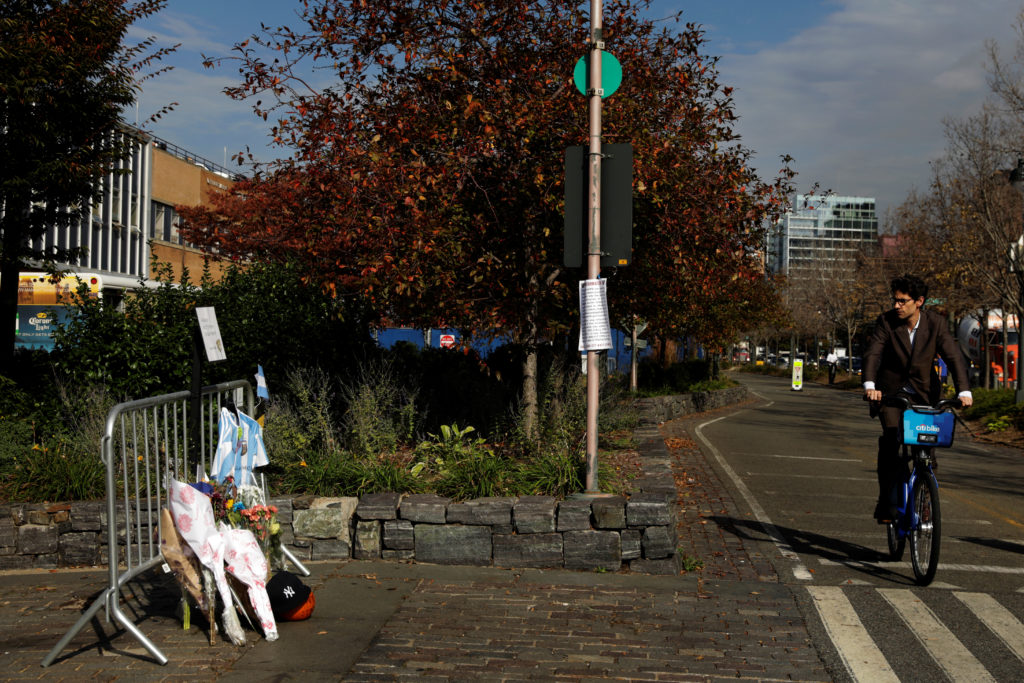 A bicyclist passes a memorial on West Street two days after a man driving a rented pickup truck mowed down pedestrians and cyclists on a bike path alongside the Hudson River, in New York, U.S., November 2, 2017. Photo by Lucas Jackson/Reuters

The people killed included five Argentine tourists who met in New York to celebrate their 30th high school reunion, a mother of two from Belgium, and one resident each of New York and New Jersey. The parents of the New Jersey victim, 32-year-old Darren Drake, are separately suing New York City for creating an unsafe environment.

Kim acted quickly to assert the authority of civilian courts to handle the Saipov case by bringing his original complaint only 24 hours after the attack. Discussing the case in a news conference, he called attention to the constitutional protections afforded to Saipov while in police custody, including warrants issued by a judge allowing law enforcement to search his cell phones and residence in Paterson, New Jersey, and the Miranda warning advising him of his right to remain silent.

The Obama administration indicted and intended to prosecute five men for the 9/11 attacks, including its alleged lead planner, Khalid Sheik Mohammed, in Manhattan federal court, but reversed its decision. Eleven years after the Bush Administration transferred them to the U.S. military prison in Guantanamo Bay, Cuba, the suspects’ cases are still pending before a military commission.

As the New York grand jury handed down the Saipov indictment, a jury in a federal court in Washington, D.C., convicted Ahmed Abu Khattala on terrorism charges for orchestrating the Sept. 11, 2012, attack on the U.S. consulate in Benghazi, Libya. But it did not convict him on the murder charges he faced.

Karen Greenberg, executive director of the Center on National Security at Fordham Law School, said the Saipov and Abu Khattala cases are examples of how prosecuting terrorists in civilian courts still works, and using military commissions instead is a “deluded idea.”

Because Saipov, entered the U.S. in 2010 on a State Department-run visa diversity lottery program, President Donald Trump had called for ending the program. The vast majority of terrorist convictions in the U.S. have been of U.S. citizens.

READ NEXT: Most convicted terrorists are U.S. citizens. Why does the White House say otherwise?

In 2015, the FBI arrested five Uzbeks in Brooklyn after the agency said it picked up on their plans to travel to Turkey to join the fight with the Islamic State in the Middle East. Three have pleaded guilty to providing material support to a terrorist organization, which is the most common charge brought in Islamic extremism cases since 9/11.

NYPD Deputy Commissioner of Intelligence and Counterterrorism John Miller has said Saipov will “have some connectivity to those who were subject to investigation, but he was not.”

The former Soviet Republics, particularly Russia and Uzbekistan, have become a leading source of “foreign fighters” for the Islamic State, according to the latest report from The Soufan Group, a security consulting firm, issued last month.

In one of the videos found on Saipov’s phone, Islamic State leader Abu Bakr al-Baghdadi had “questioned what Muslims in the U.S. and elsewhere were doing to respond to the killing of Muslims in Iraq,” according to the indictment.

The FBI also said before Saipov was shot, he had planned to circle around the southern tip of Manhattan and proceed to the Brooklyn Bridge, which has a wide pedestrian path above the roadway.

Left: Sayfullo Saipov, the suspect in the New York City truck attack, is seen in this courtroom sketch. Photo by REUTERS/Jane Rosenberg