Teens often turn to smartphones as gateway to social media

Thanks largely to the proliferation of smartphones, new data show about one-quarter of teenagers today spend nearly every waking moment of their lives online, often using social media, a finding that should come as no surprise to many parents.

Nine out of 10 teens reported that they went online daily using a mobile device, and among those teens, 24 percent described themselves as being on the internet “almost constantly.” When you consider that nearly three-quarters of all teens also reported owning a smartphone, pervasive internet access and use is “a continuation of a transformation we’ve been seeing of true mobile access,” explained Amanda Lenhart, associate director of research at Pew Research Center, which released the report today.

“It’s part and parcel with this embrace of smartphones and the constant connectivity that those offer,” Lenhart said, adding that African-American and Latino teens are even more likely to say they are online “almost constantly” compared to their white peers in the web-based nationally representative survey.

And where do teenagers go when they’re online? Social media.

By far, Facebook dominates other social media platforms like Instagram or Twitter and is used by the largest proportion of teens. Also, 41 percent of teens report visiting Facebook more often than any other form of social media, according to the report. Among those users, boys are more likely than girls to say they use Facebook the most. Girls instead tend to prefer visually driven platforms like Instagram. 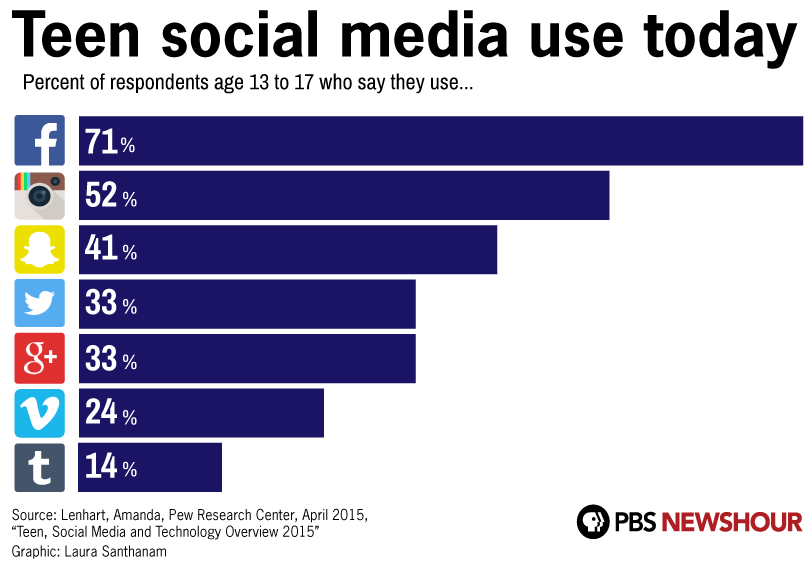 But teens aren’t loyal users of a single platform. Almost three-quarters of teens said they use more than one, the report says.

Researchers explored how this use of multiple social media allows teens to compartmentalize their circles of friends. For example, a teen may interact with one group on Instagram and another on Snapchat.

“Basically, there’s a pretty small group of teens who say they totally compartmentalize, that there’s no overlap,” Lenhart said. “The bulk of teens say there’s some overlap, but it’s not perfect.”

Teens also are more strategic about what information they share online than perhaps they often receive credit for, she added.

“They care about privacy, but they don’t care about it in the same way adults do,” Lenhart said, citing a Pew study published in 2013 that explored teen attitudes about online privacy. Lenhart said that before posting information about themselves on social media, teens consider possible reactions from their parents, teachers and school administrators, all of whom are “people who have power over them at the moment.”

“Teens care a lot about what they share and how they share it, and they think about it quite a bit,” she said.

This latest report provides a foundation of ways to examine teen use of technology and social media, especially in how they maintain friendships and romantic interests online, Lenhart said, adding that forthcoming reports will dig into how teens cultivate those relationships.

Left: Nine out of 10 teens access the Internet daily, and of those, nearly one-quarter say they "almost constantly" stay online, according to a new study from the Pew Research Center. Social media is a major driver for this behavior. Photo by Pabak Sarkar/Flickr.