Texas AG Ken Paxton once joined this family of a trans kid for dinner. They now feel under attack

On a September evening in 2016, Texas Attorney General Ken Paxton and his wife, Angela, arrived at Amber Briggle’s door in Dallas, homemade dessert in hand. The couple had driven from the next county over for dinner.

Briggle was nervous. It’s hard to hate up close, she told herself. But earlier that year, a federal judge had sided with the state’s request under Paxton’s leadership to block a federal mandate allowing transgender students like Briggle’s son to use the bathroom that matched their gender.

A local reporter had sought out Briggle for her response to the ruling. Before leaving, the reporter asked Briggle if she had any questions for Paxton. She had just one: Would the “Paxtons come to dinner and meet her transgender 8-year-old,” she asked. To her surprise, they accepted.

“He sits at the table, breaks bread with my children, with my family, in my loving, nonviolent, drug-free, safe and stable home, and then says that families like mine should not exist.”

“He literally went into a bathroom with my transgender son so they could wash their hands before dinner,” Briggle recalled.  “He turns around and looks and says, ‘This is nice. It’s been a while since I had kids this age.’”

As Paxton was leaving, Briggle asked him to do more to support trans kids, she said. The attorney general shrugged. He didn’t make the laws, he told her. It wasn’t up to him.

Briggle has been reliving this dinner over and over in recent days. On Feb. 18, Paxton, who this year faces a tough reelection, issued a legal interpretation that labels certain types of gender-affirming care for trans kids child abuse. He was backed up by Republican Gov. Greg Abbott on Wednesday. It’s unclear what these moves mean, and experts on trans issues say that no laws in Texas or other states have characterized such medical care as abuse. While it seems unlikely that transgender children will be removed from their parents, parents do worry the move sends a clear message that trans kids are unwelcome in Texas.

“He sits at the table, breaks bread with my children, with my family, in my loving, nonviolent, drug-free, safe and stable home, and then says that families like mine should not exist,” Briggle said. “It’s shameful.” 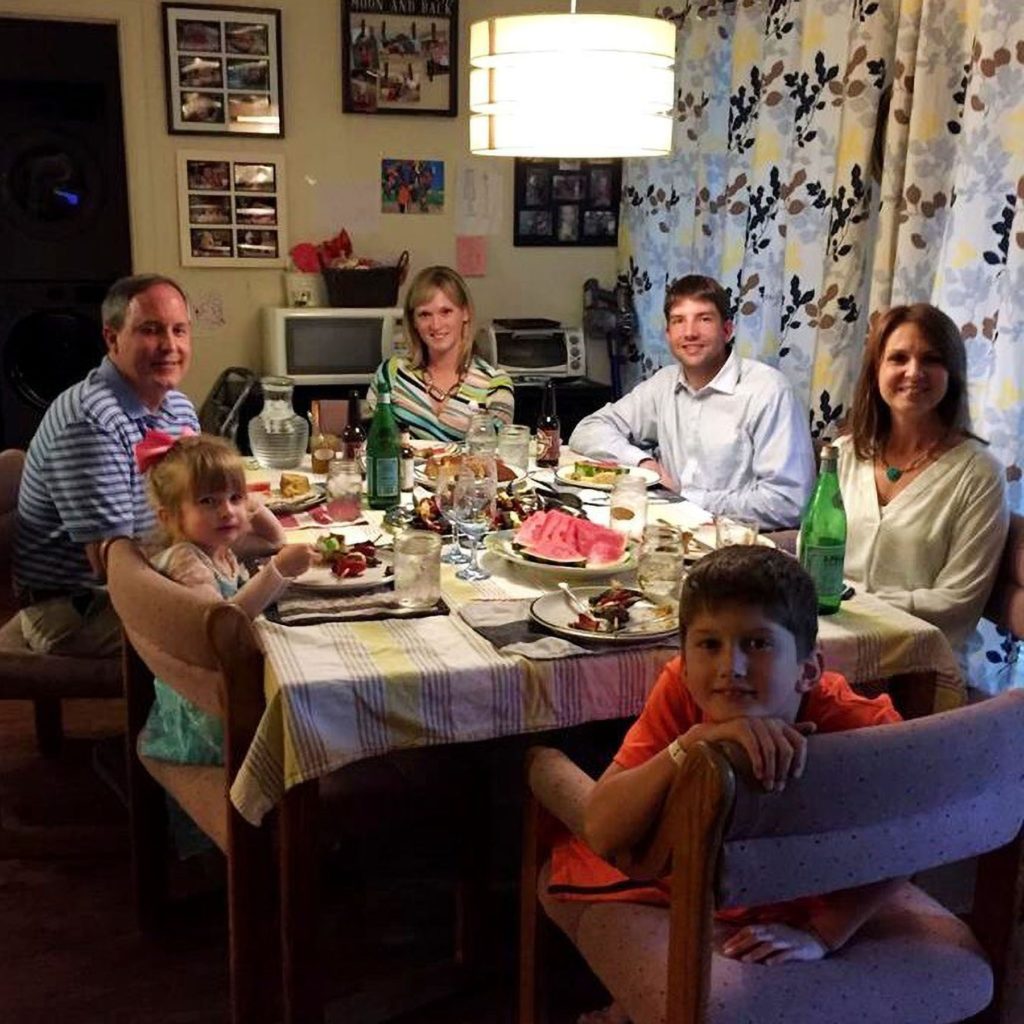 Ken Paxton shares a dinner with the Briggle family at their home in Dallas in September 2016. Photo courtesy of Amber Briggle via The 19th

Paxton’s interpretation is nonbinding. As he told Briggle, attorneys general don’t have the authority to make laws. Last year the state legislature declined to pass Senate Bill 1646, which would have classified gender-affirming care as child abuse. In a statement, Paxton said Texas law already supports his position. Paxton argues that children cannot legally consent to sterilization, a stance that perhaps confuses the science behind reversible puberty blockers, which pause puberty until they can reach an age when they are able to make more permanent medical decisions.

“There is no doubt that these procedures are ‘abuse’ under Texas law, and thus must be halted,” Paxton said. “The Texas Department of Family and Protective Services has a responsibility to act accordingly. I’ll do everything I can to protect against those who take advantage of and harm young Texans.”

Paxton’s office did not respond to a request for comment from The 19th.

Adri Pérez, policy and advocacy strategist at the ACLU of Texas, disagrees with Paxton’s interpretation of the law.

“As of today, there’s no court in Texas or the entire country that has ever found that gender-affirming care can constitute child abuse,” Pérez said.

Perez and other LGBTQ+ advocates are doubtful that the opinion can withstand a legal challenge. The real risk, they say, is that Paxton’s sentiments can fuel anti-transgender sentiment in the country, particularly aimed at youth.

LGBTQ+ advocates say Paxton is playing politics with transgender kids and their families. Ahead of a crowded Republican primary on Tuesday, Paxton is facing securities fraud charges and a federal investigation over bribery and abuse of office. If no candidate clears 50 percent of the vote, which polling indicates is possible, the race will go to a runoff in May.

Emmett Schelling, executive director of the Transgender Education Network of Texas, said he worries that the letter will send a message to trans youth that they are unwelcome in Texas.

“Unfortunately, what we’re seeing is a voracious political appetite really doubling down on how much they’re willing to hurt trans kids in the state for the sake of their campaigning,” Schelling said. 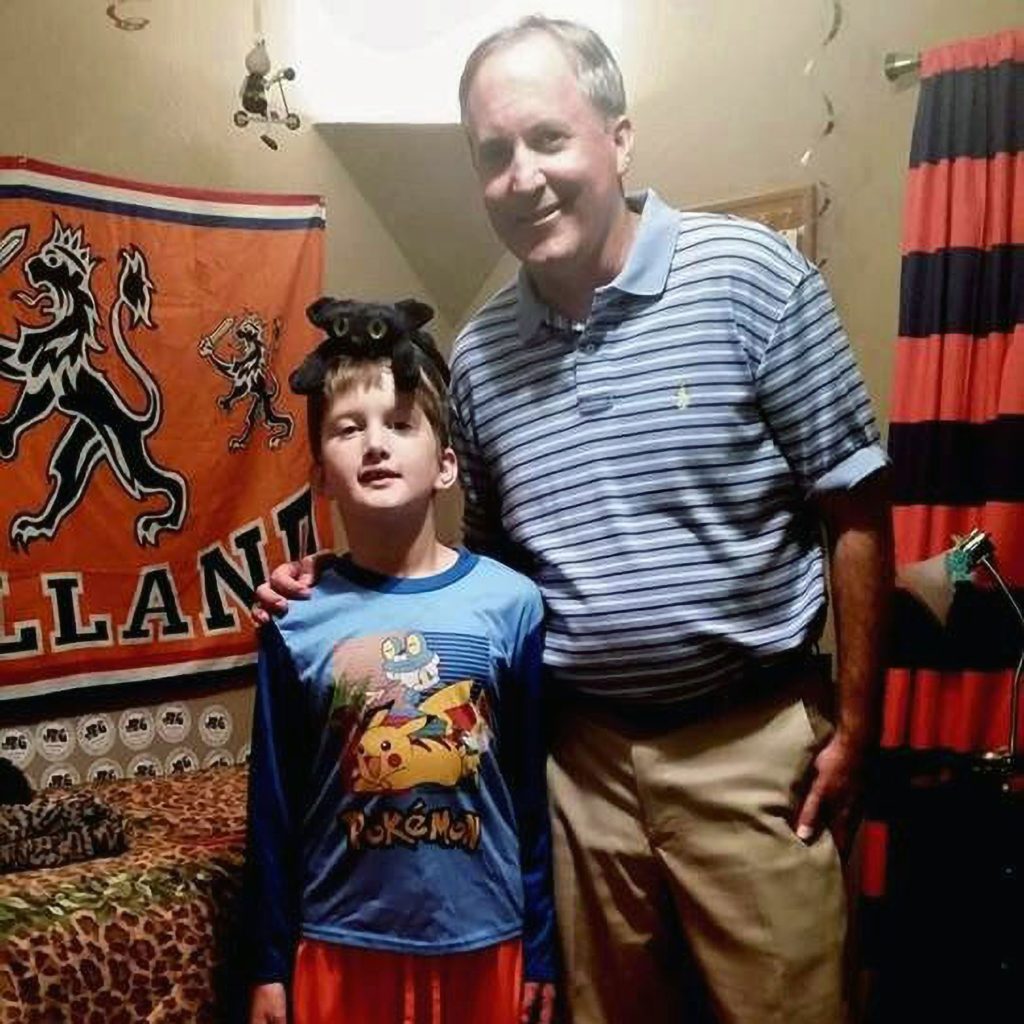 Ken Paxton poses for a picture with Amber Briggle’s son at the Briggle home in Dallas in September 2016. Photo courtesy of Amber Briggle via The 19th

Abbott, who is also up for reelection but is expected to avoid a runoff, has vowed to enforce the opinion and investigate doctors and parents who connect kids to gender-affirming care. It’s unclear how far Abbott will get in enforcing the opinion, given the lack of approval from the legislature as well as federal health care protections that cover transgender people.

Paxton’s 13-page opinion runs contrary to years of medical research and practice on transgender health. The American Medical Association, the American Psychological Association and the American Academy of Pediatrics back gender-affirming care for minors. Studies have shown that trans youth who get that care are less likely to show signs of depression and suicidality. A 2020 study published in the journal Pediatrics found that trans adults who had been given puberty blockers as kids were 15 percent less likely to have suicidal thoughts.

Trans children’s rights have been repeatedly targeted in state legislatures in recent sessions. Ten states have passed laws that ban transgender kids from playing sports in the last two years, and Arkansas passed a bill that prevents trans youth from accessing recommended medical care. The Arkansas bill has been temporarily blocked by a federal court.

Studies have shown that trans youth who get gender-affirming care are less likely to show signs of depression and suicidality.

Texas has been ground zero in the fight over trans kids’ rights. According to Pérez, the legislature considered 50 anti-transgender bills in 2021 alone. Eleven of those bills would have criminalized parents for getting their kids gender-affirming medical care. Texas passed just one anti-trans bill, a ban on transgender youth participation in sports.

Schelling says policy, politics and strategy do matter. “But at the end of the day, the thing that is important to me is that for my people​​ — children and adults — this is extraordinarily serious, and I don’t think people understand that.”

Meanwhile, Briggle has been watching uncomfortably as families like hers panic. Parents are saying they are preparing to leave the state, she said.

“He’s just sowing more confusion, and it’s hurting parents,” Briggle said. Parents are confused: “Are their kids gonna get taken from them or not?”