Why we think the way we do about men, women and work

Editor’s Note: Cultural attitudes about gender have long been a staple of social science analysis, but not so much in economics. That’s changing. And it’s the premise of Mukesh Eswaran’s new textbook, “Why Gender Matters in Economics,” published in 2014 by Princeton University Press. 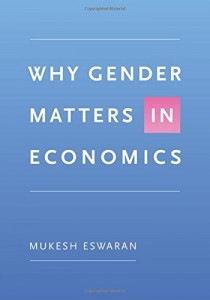 “Culture,” he says, “is now understood to play a much larger role in gendered behavior than economists previously thought.” How men and women participate in the workforce, for example, or whether men or women are seen as more competitive — that comes down to what we’re taught and socialized to think.

This is where the plow comes in. Eswaran, a professor at the Vancouver School of Economics at the University of British Columbia, presents several studies that trace the cultural origins of why we think the way we do about men’s and women’s economic roles. And he goes outside Western civilization to show that in some societies, women are the ones seen as more competitive.

What’s the risk of ignoring just how mistaken our ideas about gender are, Eswaran asks? Not simply social science oblivion, but the further oppression of women. He makes that case in the following post adapted from his new textbook.

Gender differences in behavior have economic consequences. To some extent, these differences have evolutionary origins and, therefore, may be considered innate. But to a larger extent than most of us recognize, those differences also stem from culture and socialization.

Consider the plow. In agricultural economies, that piece of farm equipment, which requires great upper body strength, shaped the gendered division of labor. It gave an advantage to men in agricultural work. Economists Alberto Alesina, Paola Giuliano and Nathan Nunn show how the use of the plow has affected the activities of women outside their homes, and in a fascinating study, they found it’s had a lasting impact beyond just the agricultural era.

The authors used data that contained information on the historical use of the plow for about 1,200 ethnic groups. They found, first, that women in groups that historically used the plow not only worked less in agriculture (as might be expected) but also participated less in other activities outside the home than women in groups that employed the plow. More interestingly, they found that even in contemporary time, women in geographical areas that historically used the plow participate less in activities outside the home than in other areas where the plow was not used. What is more, the contemporary values of men and women in the societies that used the plow are imbued with a sense that gender inequality is appropriate. For example, they tend to believe that when jobs are scarce men should be more entitled to them than women.

“The contemporary values of men and women in the societies that used the plow are imbued with a sense that gender inequality is appropriate.”

The pattern also holds in immigrant families that came to the United States from regions of the world that used the plow. Examining the labor market participation of second generation immigrant women in the United States, the authors found that women whose parents hailed from geographical areas that historically used the plow participated less in the U.S. labor market than other women. These women would have all grown up entirely in the United States and been exposed to the same market conditions as all non-immigrant women, so what made them different?

The authors point to culture. The plow, by favoring men in the fundamental activity that promoted survival (food production), lent itself to a culture that promoted the belief that women were inferior. These beliefs were passed down through generations and have continued to dictate behavior even when the social and economic conditions changed (as in present-day environments). Second generation immigrant women in the United States may well experience the same conditions outside their homes as other women. However, within their homes, they may be exposed to different cultures that discourage their full participation in the economy.

Economics explains why you resemble your mate

In general, culture is now understood to play a much larger role in gendered behavior than economists previously thought. Cultural divisions in labor may persist partly because they are mutually beneficial or because the sex with greater bargaining power foists the division on the other. Culture passes on these norms from parents to children and teachers to students. Thus what should be a temporary arrangement, suitable to a particular time period, tends to become permanent.

When technology changes, the original economic rationale for the belief that men and women should occupy separate occupational spheres may no longer be valid, but culture often insists that things be done as they have in the past. In this way, culture can transmit values and norms that last for centuries and even millennia. In future contexts, however, these norms will be merely “socially constructed” notions, as postmodernists put it, that have nothing to substantiate them except handed-down beliefs. Economics research, like in the study described above, in my view, validates this postmodernist interpretation.

Lest we mistakenly conclude that socialization is of concern only regarding women whose parents immigrated, let us consider another illustration in a different aspect of women’s economic lives. One gender difference that has been observed in the West has to do with gendered attitudes towards competition.

Women have been observed to shy away from scenarios where they are pitted against other contenders in winner-takes-all type of contests. In an experiment with students at an American university, Muriel Niederle and Lise Vesterlund showed that men are more competitive than women. The experiment had participants choose between on the one hand, a remuneration scheme that depended only on their own performance on a certain task, and on the other hand, a scheme that gave them nothing if they were not the best performers in a group but a lot more if they proved to be the best. Men chose the latter option twice as often as women did.

That fact has economic consequences. Few women occupy the topmost positions of large corporations. For example although the number of women who are CEOs of Fortune 500 companies reached a historic peak in 2014, women constitute only 4.8 percent of the CEOs. This gender disparity, as Marianne Bertrand and Kevin Hallock have shown, leads to a gender gap in the average salaries of upper management. If the selections of CEOs for large firms are made essentially through winner-takes-all type of contests, women may not enter the fray because they find it distasteful. So they won’t become CEOs despite having the requisite creativity, vision and business acumen.

But is that perceived aversion to competition innate in women or is it learned? Addressing that question requires a global experiment comparing gender competitiveness in two very different societies. To shed light on the role of culture, researchers Uri Gneezy, Kenneth Leonard and John List studied men’s and women’s attitudes toward competition in the Maasai tribe in Tanzania and the Khasi society in the state of Meghalaya in northeastern India. The former group is highly patriarchal — to the point where men consider wives to be their property. In contrast, the Khasi are matrilineal — that is, the family line is traced through daughters, not sons, and the family wealth is passed on through daughters.

“There are many factors that contribute to the oppression of women across the globe. It would not be an exaggeration to say that the mistaken concepts we entertain about the differences between men and women rank as some of the worst oppressors.”

Furthermore, the findings also caution against extrapolating from findings based only on Western culture: the patriarchal values that prevail in most Western countries would misleadingly suggest that men are inherently more competitive than women.

Why there aren’t enough businesswomen at the top, and what Sallie Krawcheck’s doing about it

The study of culture and its consequences for gender have been the bread and butter of cultural anthropology, sociology and, of course, gender studies for a long time. The examples given above, drawn from the recent work of economists, illustrate how economic actions are conditioned by beliefs and social norms. There are many factors that contribute to the oppression of women across the globe. It would not be an exaggeration to say that the mistaken concepts we entertain about the differences between men and women rank as some of the worst oppressors.

That’s largely because our society’s misunderstandings about innateness and gender dictate our actions (whom we consider suitable, and hire, for certain jobs, for example), which further perpetuate these misguided beliefs. In other words, when these actions are performed frequently enough under the influence of culture, in a vicious circle, they seem to justify the original beliefs about certain traits being innate to each gender.

The solid social science evidence now emerging exposes this largely concealed process at work. This should make us consider whether, as some feminist theorists have argued, gender is not innate but, in fact, is highly constructed.

Left: Should women work outside the home? Are they more competitive than men? Mukesh Eswaran explains the cultural origins of our beliefs about men, women and the workforce. Photo by Flickr user USDAgov.