President Donald Trump on Monday nominated Judge Brett Kavanaugh, 53, to the Supreme Court, setting in motion a partisan fight that will dominate Congress in the coming weeks and months. The confirmation battle could also play a big role in the 2018 midterms, which are less than four months away. Here are takeaways on the nomination — Trump’s second to the Supreme Court since taking office last year — and what we’re watching as Kavanaugh heads to the confirmation process.

In choosing Kavanaugh, Trump went with a seasoned federal judge and Washington insider who has impeccable credentials. Kavanaugh worked for Independent Counsel Ken Starr during his investigation of Bill Clinton, as an aide in George W. Bush’s White House, and has spent the last 12 years as a judge on the United States Court of Appeals for the District of Columbia Circuit. Conservatives have largely praised Kavanaugh’s decisions from the bench on abortion, federal regulations and immigration, among other issues.

Republicans reacting to the choice Monday night praised Kavanaugh as a consensus pick who would unite the moderate and conservative wings of the party. Kavanaugh is “a rock-solid conservative with as impressive a judicial pedigree and as upstanding a personal reputation as one can find,” Kevin Madden, a Republican strategist, wrote in an email. “At the same time, picking Brett Kavanaugh will impress even Trump’s harshest critics inside the party.”

The choice forces Democrats to oppose Kavanaugh’s nomination on its merits, which will be harder to do given his background and legal career. “Trump goes with the establishment pick,” Julian Zelizer, a historian at Princeton University, wrote in an email. “Rightward conservative but all the experience and education of an elites elite. He is daring Democrats to challenge him on his credentials.”

Will any Republicans oppose Trump’s pick?

Republicans have a 51-49 majority in the Senate. But with Sen. John McCain, R-Ariz., out battling cancer, Senate Majority Leader Mitch McConnell, R-Ky., is effectively working with a one-vote majority. McConnell needs a simple majority vote to confirm Kavanaugh, which means he could squeak by narrowly on a party-line vote. For that to happen, however, McConnell can’t afford to lose a single Republican. That’s where things could get tricky for the GOP.

During the last confirmation process, McConnell held the Senate GOP conference together and every single Republican voted for Neil Gorsuch.

During the last confirmation process, McConnell held the Senate GOP conference together and every single Republican voted for Neil Gorsuch, including moderates like Sens. Lisa Murkowski, R-Alaska, and Susan Collins, R-Maine. Now the list of potential GOP defectors has arguably grown. It still includes Murkowski, Collins and independent-minded Sen. Rand Paul, R-Ky. But it could also include Sens. Bob Corker, R-Tenn., and Jeff Flake, R-Ariz., two vocal Trump critics who are not seeking re-election. In the end, Corker and Flake will likely fall in line, but McConnell could have a problem if Murkowski and Collins decide to vote no.

For McConnell, this represents the third Supreme Court fight since 2016, when he blocked Obama’s nomination of Merrick Garland — a decision that Democrats haven’t forgotten, and that court watchers say had a lasting impact on the confirmation process.

Kavanaugh “is eminently qualified and a very talented jurist,” Nathaniel Persily, a professor at Stanford Law School, wrote in an email Monday night. But “that is all quite beside the point in today’s political environment,” he added. “The norms of Supreme Court confirmations have been degrading for some time.”

Can red state Democrats afford to vote no?

Republicans would have a cushion if even a few vulnerable Democrats cross party lines to support Trump’s nominee. That’s what happened with Gorsuch: Sens. Heidi Heitkamp, D-N.D., Joe Manchin, D-W.Va., and Joe Donnelly, D-Ind., voted yes, and Gorsuch passed on a 54-45 vote. Now, with the midterms less than four months away, Democrats running in states that Trump carried in 2016 will face even more pressure to approve his Supreme Court nominee, assuming a vote takes place before the fall election. If they vote no, red state Democrats risk angering Republican voters who could seek retribution at the polls. 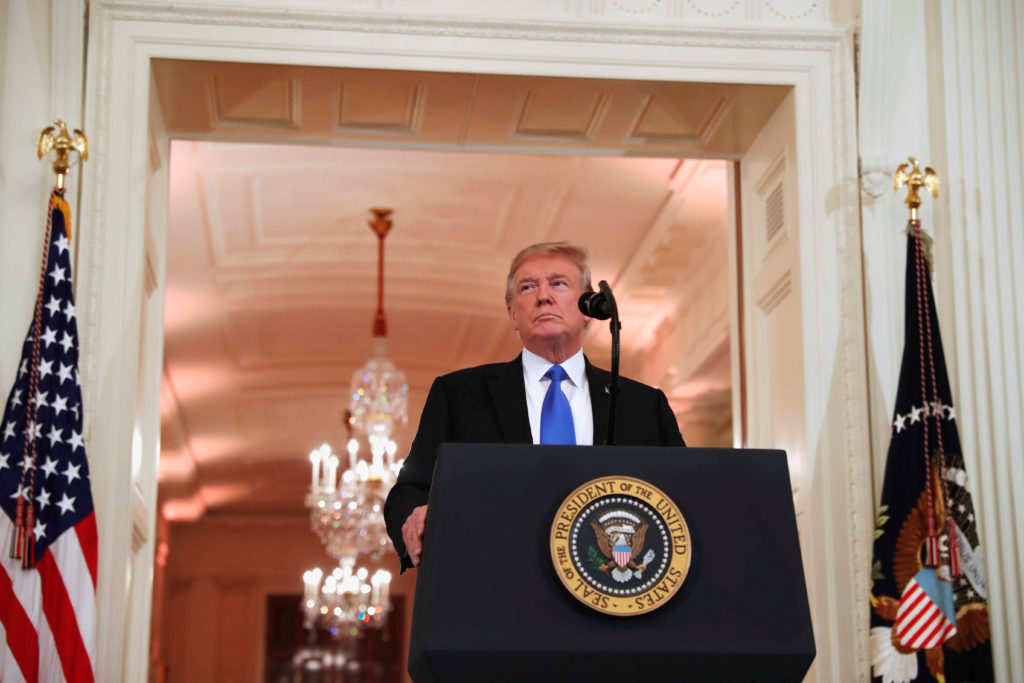 President Donald Trump prepares to introduce his Supreme Court nominee in the East Room of the White House on July 9, 2018. REUTERS/Leah Millis

In many ways it’s a lose-lose political situation for Democrats like Manchin and Heitkamp, because a yes vote for Kavanaugh, while appeasing Republicans in their home states, would infuriate the party’s liberal base. It would also put them at odds with the chamber’s most liberal Democrats — including several potential White House candidates — who will face different pressures over the coming Supreme Court nomination battle.

Three rumored presidential contenders, Sens. Kamala Harris, D-Calif., Cory Booker, D-N.J., and Amy Klobuchar, D-Minn., sit on the Senate Judiciary Committee, giving them a prominent platform to oppose Trump’s pick. Their different approaches in the confirmation hearings will offer a preview of the party’s 2020 primaries, which start in less than two years.

Kavanaugh could start to “turn back the clock on the gains of individual rights,” particularly when it comes to women’s rights and the rights of individuals versus businesses, Booker told the PBS NewsHour’s Judy Woodruff shortly after the announcement.

“Where the Supreme Court now could go with this pick is disturbing. It should be disturbing to individuals who believe in things like individual liberties and the ability to make your own health care decisions, the ability to organize for a better salary, better wages. The ability to have your voice matter in a democracy, especially compared to the growing power of corporations,” he added.

Fast forward to the latest Supreme Court pick. Trump chose a white man. On one hand, Trump was all but certain to faced backlash as long as the nominee had a conservative record on abortion and other hot-button issues. Still, the president had an opportunity to make a statement about diversity.

By elevating another white man to a position of power, Trump reinforced the view — among his critics on the left, at least — that he is only interested in promoting people who look like himself. The pick was also a stark reminder of a diversity problem on the nation’s highest court, one that long predates Trump. If Kavanaugh is confirmed, he will be the 115th person to serve on the Supreme Court. Of those, only two have been black, and just four have been women.