The Tornillo shelter for migrant children was supposed to close after 30 days. Here’s why it’s still open

An emergency detention camp that opened this summer to help with an influx of migrant children was supposed to close after 30 days.

But today, it remains open, and has become the largest shelter for migrant children in the U.S. Located in a remote part of West Texas, it has grown significantly in size — housing at least 1,800 children — and received exponentially larger grant funds. It may remain open into the new year.

HHS has said the continued operation of the Tornillo shelter is “a necessary and prudent step to ensure that HHS has the capacity to provide appropriate care for the children while a suitable sponsor is identified.”

In a statement to the PBS NewsHour this week, a HHS spokesperson also said that the number of unaccompanied minors U.S. agents apprehend at the border are a “symptom of the larger problem, namely a broken immigration system that encourages them to make the hazardous journey.”

Since the facility is on federal property, it’s not beholden to state requirements. This has worried advocates, along with a government watchdog, who both have raised concerns about the lack of transparency into the facility’s operation and the conditions the children face while inside the shelter.

“It’s bad for the kids, it’s bad for taxpayers, and it goes against how we should be welcoming people to the United States,” a former Department of Health and Human Services official who served under former President Barack Obama said. The former official is no longer working in the federal government and is not authorized to speak to media by their current employer.

Here’s a look at what we know about Tornillo shelter.

Tornillo has expanded three times since it opened this summer

The federal detention center, located outside El Paso, Texas, was opened this summer to temporarily hold young migrants who arrived at the border alone, primarily from Guatemala, Honduras and El Salvador.

HHS maintains a network of more than 100 shelters in 17 states to house unaccompanied minors. The Tornillo shelter is one of two “influx care facilities” that handle overflow when other spaces are up to capacity. The other is in Homestead, Florida.

In June, Tornillo started to accept young migrants who arrived at the border alone, primarily from Guatemala, Honduras and El Salvador.

It was originally designed to hold up to 360 children, quickly erected in about a day’s time. By the next day, 100 unaccompanied minors were being housed at the shelter, which is operated by BCFS Health and Human Services, a third-party contracted by the federal government.

Today, HHS said all children at the facility are provided individual care and case management, access to legal and educational services, three meals a day and snacks, and an array of recreational activity. 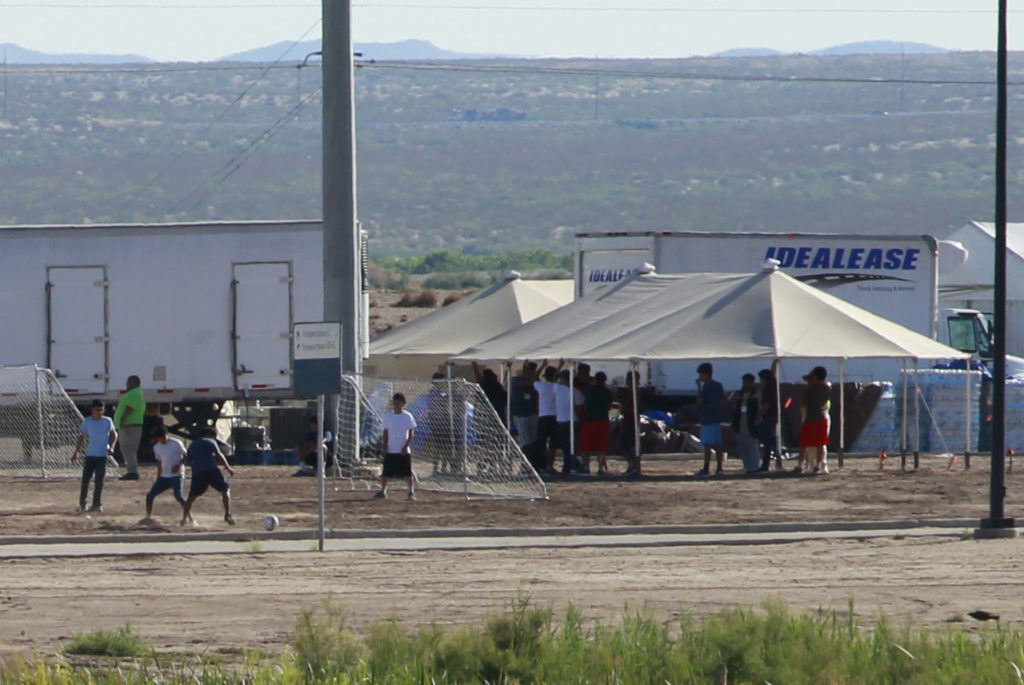 Children of detained migrants play soccer at a newly constructed tent encampment as seen through a border fence near the U.S. Customs and Border Protection (CBP) port of entry in Tornillo, Texas. Photo taken in June. Photo by Jose Luis Gonzalez/Reuters

At the time, a fact sheet from HHS said that this West Texas center would have the “ability to expand or contract,” The Texas Tribune reported. The center has only expanded since then.

Initially, the Tornillo facility received $15 million of grant funding for a 30-day operation, starting from when it opened June 14. The operation has been extended three separate times over the summer. The first two extensions meant an additional $47 million in grant funding, according to a memo released this week by the HHS Office of Inspector General. In September, the center was extended again, bolstered by an additional $368 million in grant funding, partly to increase bed space. The center is now expected to be open through the end of the year.

There’s no word from the administration yet if it intends on keeping the facility open into the new year. But the Associated Press obtained a contract that it said showed the project possibly lasting until 2020.

The number of migrant teens at the center keeps growing. They’re being held longer too.

The center was opened amid the fallout from the Trump administration’s “zero tolerance” policy, which resulted in the separation of thousands of migrant children from their parents. A court-imposed order has reunified most of the separated migrant families this year, so the children now at this West Texas facility are mainly unaccompanied minors, teens who arrived at the border alone. 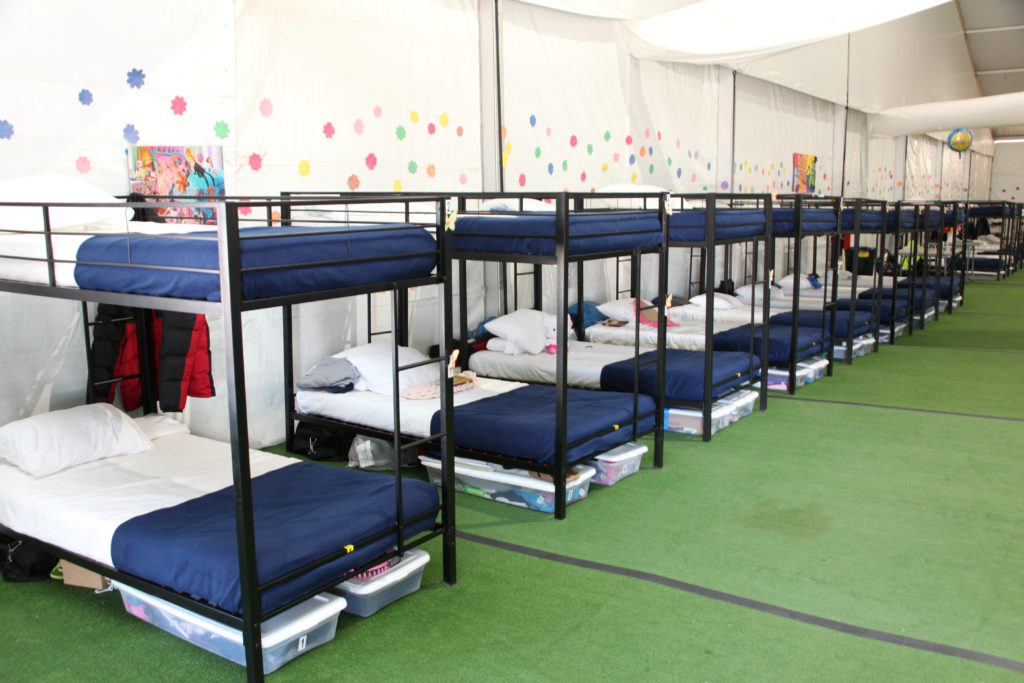 Bunk beds are seen at a tent city set up to hold immigrant children separated from their parents or who crossed the U.S. border on their own in Tornillo, Texas, in this U.S. Department of Health and Human Services (HHS) image released on Oct. 12, 2018. Photo courtesy HHS/Handout via Reuters

Immigration agencies have said the expansion was necessary in the face of migrant children continuing to arrive without adults at the southwest border, an HHS official told the Tribune after the third expansion in September. But immigration experts have pointed out that the number of children arriving at the border has not matched the record highs Central American migrants arriving at the border under former President Barack Obama.

When the fiscal year ended in September, the U.S. said it had documented more than 50,000 unaccompanied minors arriving at the border, The Houston Chronicle reported. In fiscal year 2016, that number was higher, nearing 60,000. In 2014, at the height of the Central American migrant crisis, that number topped more than 68,500.

The numbers seen in 2017, at the start of the Trump presidency, were lower, but immigration experts such as those at the Migration Policy Institute said this was because “would-be migrants seemingly held back in wait-and-see mode” after hearing Trump’s hardline rhetoric on immigration.

At the moment, there’s a record number of migrant children — more than 14,000 — being held in shelters across the country, the Chronicle reported. That includes the 1,800 children currently at Tornillo. Advocates believe this is because of the Trump administration’s extra scrutiny in its new vetting process, which includes mandatory fingerprinting, for potential sponsors and other household members.

Advocates have said this vetting has contributed to why children are staying in these shelters longer. According to the latest government numbers, the average length of stay for children at Tornillo, is 25 days. Buzzfeed News has pointed out that many of the children at Tornillo had already spent weeks or months at other HHS shelters before being transferred there.

“We are concerned that upward trends in average length of stay could indicate that Tornillo is or will be functioning more like a shelter care facility, thereby moving away from its initial design as an emergency short-term-care facility,” the OIG memo said.

“The best place for a child is with a parent. That’s well established in society, under law, in social work practice,” Bob Carey, who served as director of HHS’ Office of Refugee Resettlement under Obama, told the PBS NewsHour. “This is just another iteration of family separation. Children being kept away from their parents and family members, in an institutional setting, in the desert, during the holidays,” he added.

The former HHS official who wanted to remain anonymous told the NewsHour that they didn’t have major concerns about Tornillo, saying that they has confidence in the provider.

“They’ve done influx sheltering before, and they’re a reliable organization,” they said. “But it’s not ideal. We have moved away from mass orphanages and foster care because that’s not best practices for the kids. Smaller is better. The outcomes are better.”

FBI background checks have been waived for Tornillo staff

OIG investigators, who provide oversight for HHS, recently visited the Tornillo facility as part of a broader review of facilities housing migrant children. According to their memo, they identified two issues during that visit which “could significantly compromise the safety and well-being” of unaccompanied minors in U.S. government care.

Investigators found that officials had waived the required FBI fingerprint background checks for the staff at Tornillo, instead relying on less-comprehensive checks run by a private contractor, “thereby heightening the risk that an individual with a criminal history could have direct access” to children in their care.

In a statement provided to the NewsHour, HHS responded by saying that contractor, BCFS Health and Human Services, ran pre-employment checks for all employees since operations at Tornillo began. Those checks, they say, included “similar criminal information as fingerprint background checks” run by the FBI.

“You’re putting parents and potential sponsors through a background check, but not putting the employees at these facilities through the same one?” Carey said of the waived background checks. “Why wouldn’t you require the same standard of care? It’s inconsistent.”

Immigrant and child welfare advocates have long expressed concern about proper vetting of staff charged with the care of unaccompanied migrant children. Those concerns are rooted in a number of allegations, citations, and convictions across multiple states and facilities. Among them: an Arizona facility where an employee abused detained children in 2016 and 2017, and was later convicted on sex charges; a different Arizona facility in which staff were fired and operations were suspended in October 2018 after allegations of physical abuse involving staff and three children; and multiple allegations, citations, and violations across Texas facilities of abuse or neglect, uncovered as part of a June 2018 investigation.

HHS responded to the finding by saying that Tornillo has “sufficient clinicians to provide emergency clinical mental health services” for children who request them, and noted that their ratio had improved by Nov. 27 to 1 clinician for every 43 children. Because Tornillo remains classified as an emergency influx facility, it is not subject to the same ratio requirements as other federally-contracted facilities.

In a recent fact sheet, the agency also said the children have an average supervision ratio of no more than one adult for every eight children per day.

Left: Immigrant children housed in a tent encampment, shown walking in single file at the facility near the Mexican border in Tornillo, Texas, on June 19, 2018. Photo by Mike Blake/Reuters