The U.S. has continued to dismiss criticism over its use of tear gas on a group of asylum-seekers in Tijuana, saying the “chaotic” weekend of border clashes were “predicted” by President Donald Trump and immigration officials. The incident, Trump officials said, justified the administration’s recent shoring up of security at the border.

“This was never a political stunt, as some in the media have suggested,” Department of Homeland Security press secretary Tyler Houlton told reporters in a media call Tuesday. “This is a real threat.”

Still, pressure from human rights groups continues, and Mexico’s ministry of foreign affairs requested that U.S. authorities thoroughly investigate the use of non-lethal weapons in the border area of Tijuana and San Diego.

Here’s how the Trump administration is defending the use of tear gas by U.S. border agents, what we know about the migrant caravan, and what’s next for asylum seekers along the border.

The “least amount of force”

Rodney Scott, the chief patrol agent of the San Diego Border Sector Patrol, defended the use of tear gas or CS gas, stating it was the “least amount of force” the agents could have possibly used to respond to an “immediate and direct threat to their safety.”

“The pepper gas is an irritant, there’s no permanent harm,” Scott told reporters in a media call Tuesday. “But the easiest way to avoid it is comply with the law.” 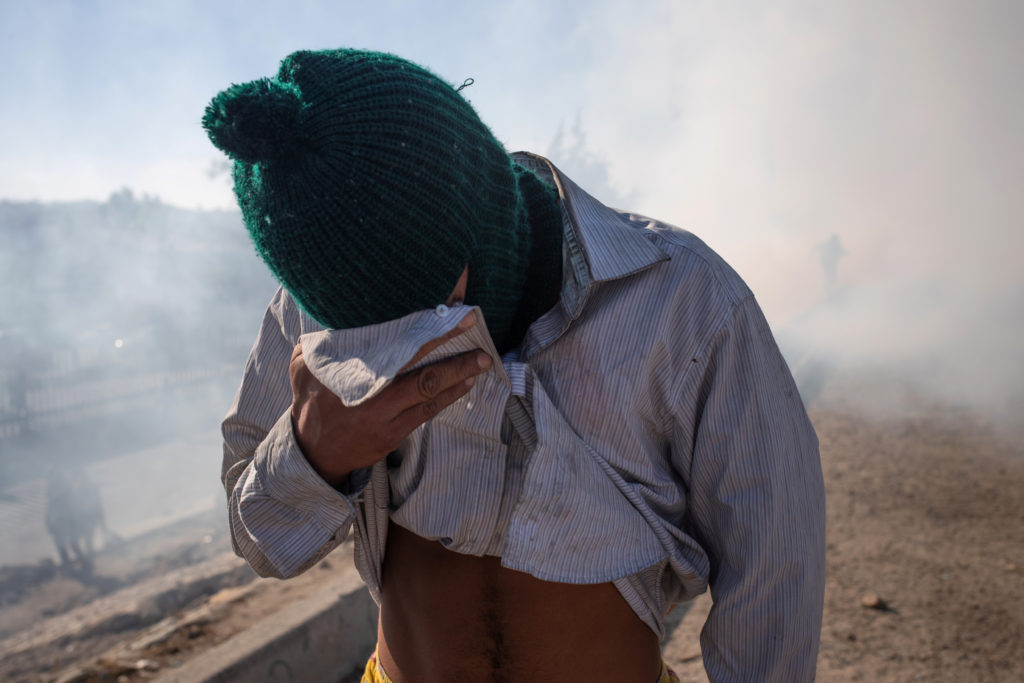 A migrant, part of a caravan of thousands from Central America, covers his face after being affected by tear gas released by the U.S. Customs and Border Protection (CBP) after hundreds attempted to illegally cross into the U.S from Mexico from Tijuana, Mexico. Photo by Adrees Latif/Reuters

On the day of the clash, hundreds had joined a largely peaceful protest that ended up outside the port of entry to air their frustrations about the long wait times for processing their asylum claims.

Houlton also defended the use of tear gas by pointing out how often this method is used by U.S. law enforcement to control unruly crowds.

“If the same thing took place in a large American city during a violent protest or riot, the press and politicians would be praising the work of law enforcement for restoring order and keeping the peace with no injuries,” Houlton said.

On Twitter, several Democratic lawmakers criticized Border Patrol agents’ methods to disperse the crowd, arguing that women and children were caught up in the turmoil.

Democratic National Committee Chairman Tom Perez tweeted “shooting tear gas at children is not who we are as Americans.”

Shooting tear gas at children is not who we are as Americans. Seeking asylum is not a crime. We must be better than this. https://t.co/Ar4PLlPgmG

Gavin Newsom, the Democratic governor-elect of California, tweeted that “women and children who left their lives behind, seeking peace and asylum, were met with violence and fear.”

These children are barefoot. In diapers. Choking on tear gas.

Women and children who left their lives behind — seeking peace and asylum — were met with violence and fear.

That’s not my America. We’re a land of refuge. Of hope. Of freedom.

And we will not stand for this. https://t.co/1APpeHIq6v

Alexandria Ocasio-Cortez, the Democratic representative-elect of New York, tweeted that “asking to be considered a refugee and applying for status isn’t a crime.”

Asking to be considered a refugee & applying for status isn’t a crime.

In Tuesday’s media call with reporters, Houlton said what happened on Sunday was a “routine border protection mission against a violent mob of a thousand people.”

Mexico’s own official count of migrants who attempted to cross into the U.S. placed the number closer to 500. In all, U.S. officials said there are about 6,000 Central American migrants waiting in Tijuana, part of a northbound caravan group that has for weeks traveled by foot to seek asylum in the U.S. Both American and Mexican officials estimated that there are another 2,000 or more migrants located in nearby Mexicali.

Houlton said the group that clashed with U.S. and Mexican agents was mostly male and throwing projectiles, including rocks and concrete, at authorities. U.S. agents then targeted “violent men” who were hitting officers with the objects, “destroying” federal property and trying to illegally enter the country.

It was Border Patrol agents’ professionalism and training that made sure no one was “seriously injured” during the clashes, Houlton said, echoing arguments made by Homeland Secretary Kirstjen Nielsen in a long Facebook post on Monday.

U.S. claims many of the migrants are criminals, but declines to give evidence

The Trump administration, including the president himself, have made several assertions about the caravan, including that it is mostly made up of men who have criminal records. But the officials in Tuesday’s call would not say on the record on how they know this to be fact. 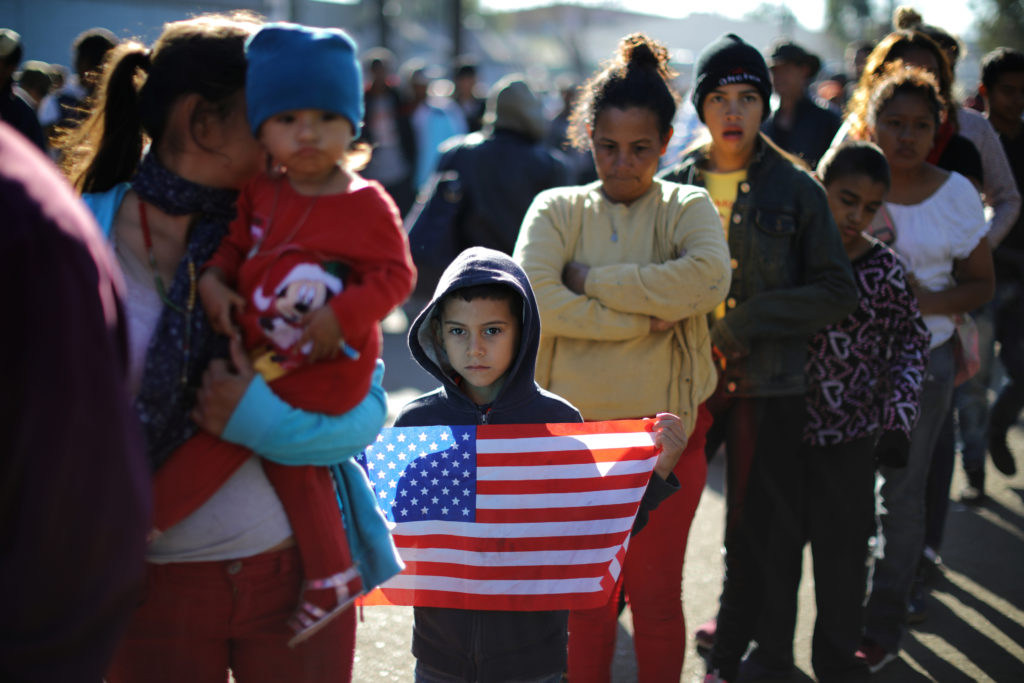 Marie Orellana, 28, (4th L) and her seven-year-old son Angel (3rd L holding flag), from Honduras, part of a caravan of thousands of migrants from Central America trying to reach the United States, queue for food outside a temporary shelter in Tijuana, Mexico. Photo by Lucy Nicholson/Reuters

In a tweet on Monday, Trump called the migrants “stone cold criminals” and — in a familiar refrain — urged Mexico to do more about the situation. Later that same day, Trump told reporters outside the White House that agents had to use the tear gas because they were “being rushed by some very tough people.” He added: “Nobody’s coming into our country unless they come in legally.”

Nielsen, in her Facebook post, said DHS has confirmed that there are more than 600 convicted criminals, known to authorities for a variety of serious offenses, traveling with the caravan. She did not provide evidence to support that assertion.

When DHS was asked about how the federal government knows this number on Tuesday’s media call, officials declined to answer, saying the details are “sensitive” and cannot be released publicly.

Sarah Pierce, a policy analyst for the Migration Policy Institute, told the PBS NewsHour that the administration’s defense of the U.S.’s actions at the border are “very consistent” with how U.S. officials have been framing the migrant caravan issue and entries at the southern border.

“The administration has really disregarded the fact that there might be legitimate asylum-seekers in this group and kind of painted them overall as a group of individuals that are seeking to take advantage of U.S. immigration laws,” she said.

Nielsen, in the same statement, also said the “limited number” of women and children in the caravan are being used as “human shields” during confrontations with authorities.

“They are being put at risk by the caravan organizers as we saw at the Mexico-Guatemala border. This is putting vulnerable people in harm’s way,” she wrote.

This was also presented without evidence.

But it echoed the picture Trump painted at a roundtable event on Monday in Biloxi, Mississippi, where he said there were “grabbers” within the caravan, who grab children to better their chances at crossing the border.

Such people “think they’ll have a certain status by having a child,” the president said.

It’s not immediately clear if this is true or how DHS knows this. Pierce of MPI said the way the U.S. determines whether or not a migrant is coming for economic reasons or for asylum is by adjudicating their claims. The Associated Press previously reported that the San Ysidro center is processing fewer than 100 claims a day, while thousands wait for their chance at asylum.

Pierce said she doesn’t know how the administration could know with any certainty that these are economic migrants or asylum-seekers. She also said that a migrant with a legitimate asylum claim could also be coming to the U.S. for economic reasons.

“It does not matter if a migrant is interested in coming into the United States for economic reasons so long as they have a well-founded fear of persecution on account of race, religion, nationality, membership in a particular social group, or political opinion,” Pierce told the NewsHour. “If they fall into that legal definition then they qualify for asylum in the United States, regardless of their economic condition,” she said.

Scott Shuchart, a senior immigration fellow at the Center for American Progress, joins Amna Nawaz to discuss the administration’s recent moves on asylum.

No matter the goal of the majority of migrants, the Trump administration has been trying to make it more difficult for people to seek asylum in the U.S.

Trump signed a proclamation earlier this month that sought to deny asylum to migrants who attempt to cross into the U.S. between ports of entry. Those new regulations were quickly challenged in court, and a federal judge enjoined the new asylum rules, pending a final ruling on the matter.

Houlton said the U.S. has been in “constant dialogue” with Mexican officials about the caravan. Mexico’s ministry of foreign affairs has requested that U.S. authorities thoroughly investigate the use of non-lethal weapons and what transpired in the border area of Tijuana, San Diego.

While local officials in Mexico said they’ve been struggling with accommodating the thousands of migrants waiting in their cities, the Mexican government has pledged a bigger law enforcement presence at the border and said it would ready deportations for migrants it has identified as trying to “violently” enter the U.S.

READ MORE: What’s happening with asylum-seekers at the border?

Left: Central American migrants run along the Tijuana River near the border crossing in Tijuana, Mexico, after the U.S. Border Patrol threw tear gas to disperse the crowd attempting to cross into the U.S. Photo by Guillermo Arias/AFP/Getty Images