The unique trauma of mass shootings — and how hospitals can prepare

Dr. Christopher Hunter was working the overnight shift at an emergency room north of Orlando on June 12 when he received a text message around 2 a.m. There had been a shooting with up to 20 patients.

“I was convinced they had typed it in wrong,” Hunter, the associate medical director for Orange County EMS, said. But when he called dispatch to check, he learned there had been no mistake. “They said, ‘It’s real — we’re sending a dozen or more units. It’s an active shooter.’”

This emergency code meant nearly all incoming patients unrelated to the shooting would be diverted to other hospitals, allowing personnel to focus on the influx of severely wounded people from Pulse who were in need of urgent care.

As Hunter coordinated between EMS personnel, law enforcement and staff at the hospital, he said he felt a pull toward the nightclub, where he knew many lives were at stake.

“I felt like a caged animal,” he said. “I wanted so badly to be at the scene where I felt like I belonged.”

By the time the carnage ceased, the reality would be even more grim than the text Hunter read in initial disbelief. Forty-nine people were killed and at least 53 were injured in the deadliest mass shooting in recent U.S. history.

It was bloodshed on a scale Hunter said he and his colleagues could not have imagined. But as he recalled a night of challenging firsts — How to set up a victim telephone hotline? Where to put the onslaught of panicked family members who descended on the hospital, desperate for answers? — he says lives were saved because the hospital was prepared. 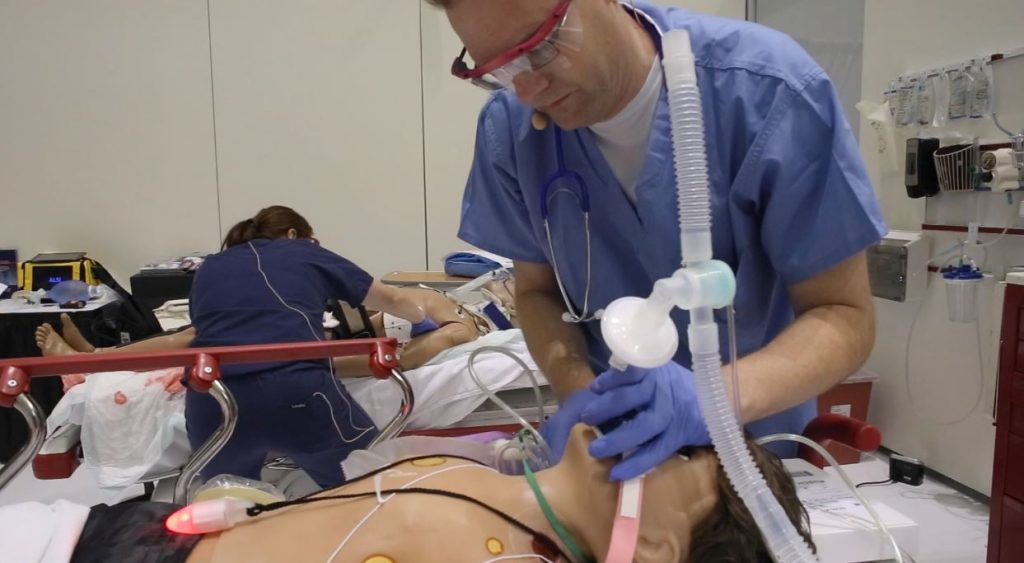 At the American College of Emergency Physicians 2015 conference in Boston, attendees took part in a full simulation of a mass shooter scenario. Photo courtesy of ACEP.

Four years earlier, after 20-year-old Adam Lanza killed 20 first graders and six adults at Sandy Hook Elementary School, Hunter and his team drilled for what might happen if a mass shooting hit Orlando.

Among the observations made, the simulation revealed EMS personnel were hindered by “unwieldy equipment.” The team realized “there was no way they were going to be able to get everyone out in time,” he said.

“We said, ‘We have to approach active shooters in a different way,’” Hunter said. Rather than have EMS workers follow their usual protocol — which includes checking an individual’s vitals and setting up an intravenous line — personnel would tend only to the most severe injuries, including life-threatening hemorrhages, and then rush the patient to the hospital.

Emergency workers switched to this crisis protocol when responding to the shooting at Pulse, transporting patients to nearby Orlando Medical as quickly as they could, Hunter said. 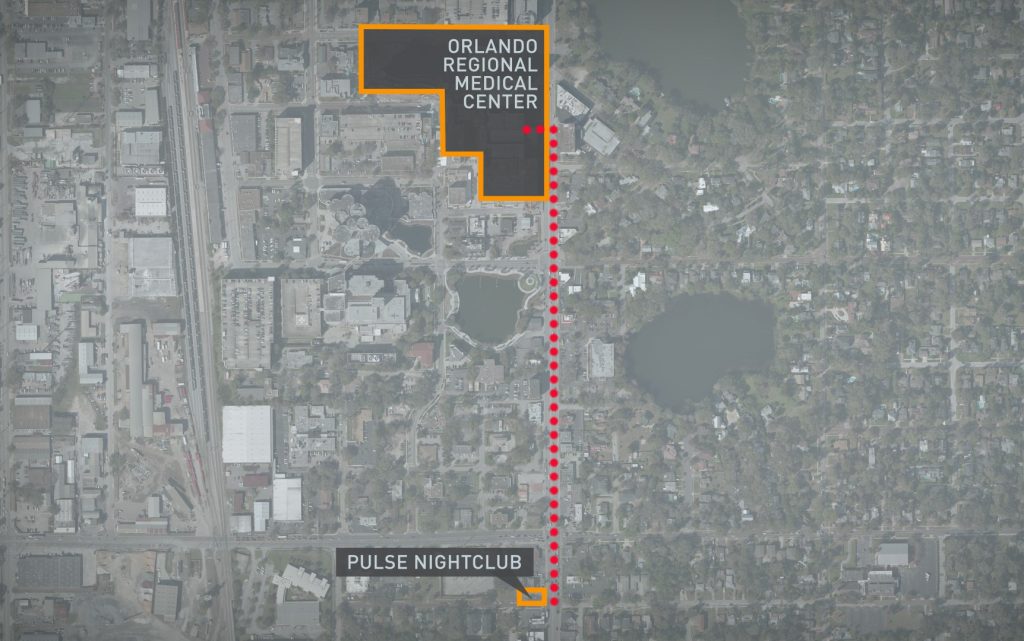 Amid the chaos, hospital workers worked fast to treat victims with a range of critical injuries. One patient had 11 gunshot wounds. Others suffered head trauma. Many appeared to have been struck by the gunman at close range, the trauma center’s director told the Los Angeles Times.

The kind of preparedness Hunter attributes to having saved lives in Orlando is being advocated on the national level by the American College of Emergency Physicians (ACEP). 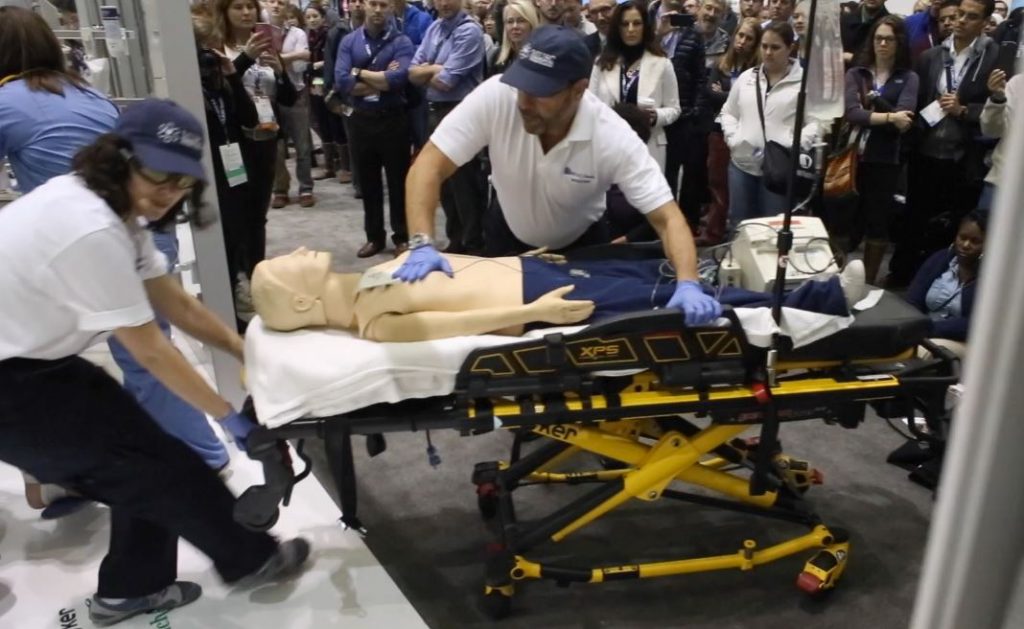 At the American College of Emergency Physicians 2015 conference in Boston, attendees took part in a full simulation of a mass shooter scenario. Photo courtesy of ACEP.

Following the attacks in Paris, in which gunmen and suicide bombers killed 130 people in a coordinated assault on the French capital, Kaplan convened a “High Threat Task Force” in January to look at these questions in depth.

The task force has a number of goals, including developing a repository for data on wounding patterns and causes of death for victims as well as testing best practices for trauma care in a mass shooting.

Kaplan also established a working group to assess what hospitals can learn from military emergency medicine and “translate that to the civilian setting.”

“The battlefield has been brought to our community,” he said.

“The battlefield has been brought to our community.”

In order to study these issues in depth, Kaplan’s group, along with many others in the public health community, have pushed for more government funding.

In April, ACEP and other organizations representing health care, scientific organizations and research universities across the country sent a letter to Congress urging an end to what they called the “chilling effect of the current rider language” restricting gun violence research and calling for funding for such study at the Centers for Disease Control and Prevention (CDC).

“Medical professionals and our communities work to address the devastating and long-lasting physical and emotional effects of gun violence on victims, their families and their friends, but are hampered by the insufficient body of evidence-based research to use to point communities toward proven gun violence prevention and programs,” the letter read.

Speaking at the NewsHour’s town hall on June 2, President Barack Obama said the nation’s approach to researching gun violence should mirror what the government has done to combat automobile fatalities.

“We studied what is causing these fatalities using science and data and evidence, and then we slowly treated it like the public health problem it was, and it got reduced,” he said. “We are not allowed to do any of that when it comes to guns because if you propose anything, it is suggested that we’re trying to wipe away gun rights and impose tyranny and martial law.”

The administration has requested $10 million to support research into the causes and prevention of gun violence from a public health perspective, according to the CDC.

But Linda Degutis, director of the Avielle Foundation, an anti-violence non-profit organization, told the public radio program Science Friday that the funds have not been appropriated.

“If we did adequately fund the research, we could have some evidence-based solutions to the problem,” Degutis said.

Kaplan said new studies could help medical professionals understand more about why people die from injuries sustained in mass shootings, including how more lives could potentially be saved.

“As an individual, I want to challenge our legislators and say to them — what are you really worried about? Are you worried we’re going to show something that’s somehow negative to Americans’ ability to carry guns?” Kaplan said. “What do we do in a court of law? People present evidence. But we don’t have the evidence to present because Congress has effectively prevented us from doing that.”

In a statement to Science Friday, the National Rifle Association spoke out against the “vast majority of gun-related research” for what it called a “routine failure of investigators to make any attempt to incorporate or account for the positive outcomes associated with firearm ownership.”

This “flaw in design research” results in “findings that are biased toward the conclusion sought — more gun control at the local, state or federal levels,” the NRA said.

The Senate is expected to vote on Monday on a variety of measures related to gun control. Democrats have proposed expanded background checks to cover purchases at gun shows and banning gun sales to anyone on a government terror watch list.

Republicans voted down similar measures following the mass shooting in San Bernardino on Dec. 2 of last year, when a married couple killed 14 people and injured 22, according to the New York Times.

Kaplan fears similar congressional reluctance may stymie progress on the research front, even in light of the Orlando massacre.