Reporter’s Notebook: The Weight of Facts in Newtown 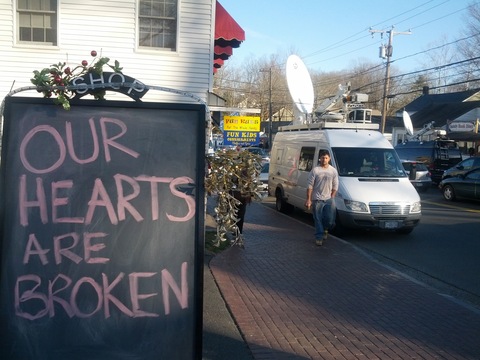 A sign at a business located in Newtown, Conn., the site of the mass shooting Friday at Sandy Hook Elementary School. Photos by Hari Sreenivasan/PBS NewsHour.

DANBURY, Conn. — I realize it has been a while since I’ve traveled to cover a mass shooting for a commercial network and that my time at PBS has likely gotten me used to longer form or “slow journalism” as it is called, but I’m truly startled to see the force of pack journalism in Newtown (which by my presence in the Connecticut town, I admit to being a part of even as I write this).

You may have seen some of the images and video posted on the Newshour website Friday — the ones which showed what seemed to be two dozen microphones pointed at the authorities during their regular updates. For every microphone there is at the very least a camera person, often in addition, a producer, a reporter and sometimes even a sound engineer. 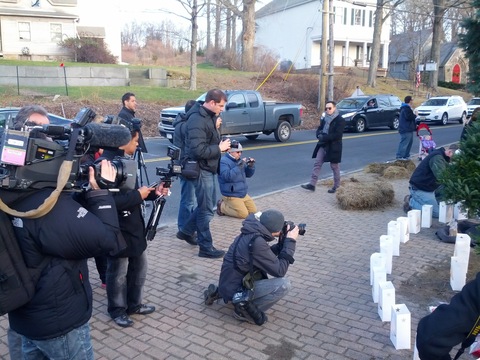 Reporters flock to a makeshift vigil.

Satellite trucks, which are usually a rare sighting, are plentiful, beaming the images and video in real time out to the far corners of the earth. Since getting to Newtown Saturday afternoon, I’ve walked by at least a dozen satellite trucks all crammed within a few blocks from Sandy Hook Elementary School, and I’m sure there are at least three dozen more.

What boggles my mind is how so many different news and media outlets could get so much of the initial reporting wrong. The Associated Press asked this question in a short article worth reading. For a much deeper dive on how this entire process of storytelling is changing, read a 100-page report from Columbia University’s Tow Center for Digital Journalism called Post-Industrial Journalism.


The solid reporting is often done best by those closest to the sources: the local reporters who live and work in these communities. In the case of this tragedy that would be the Newtown Bee or the Stamford Advocate or the Hartford Courant. These reporters, thanks to the Internet, have nearly the same reach as any major television news network on the planet.

So why are the rest of us here? I took a train from Washington Saturday so I can file a sidebar for Monday night’s program. When I was checking into a hotel here, the man next to me used his passport from Germany as photo identification. This seems to have gripped the world in a way very few stories do, perhaps the last time I can remember this would be when the Chilean miners began emerging above ground after their enormous ordeal. There was joy and anticipation, the world breathed a sigh of relief, this story seems the opposite.

Perhaps the captivation is because an attack on children is understood unequivocally as a universal atrocity across borders and cultures and religions. That all said, I wonder how each of these storytelling teams adds to this story, and ultimately affects this tiny town they have converged on to cover. I wonder how much the observer effect is already at work as this community tries to grieve.

I was in the middle of an interview Saturday evening when the list of victims became public. I could see the anguish on the face of my source as her husband read her the names of the children and adults. At least a half dozen of the names were ones she personally knew, and two made her gasp. 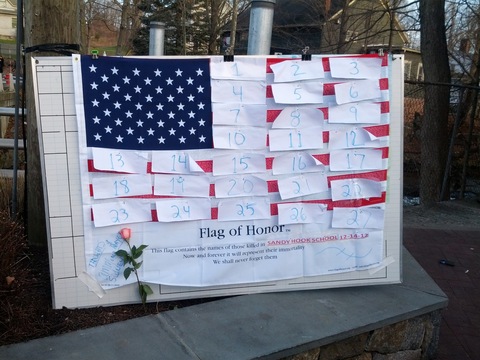 Image reads: “This flag contains the names of those killed in Sandy Hook School 12-14-12.”

For many in this small community, they already knew the identities of some of the victims. It may have seemed a frustrating wait for the rest of us used to news at the speed of a text or tweet, but from the people who waited long enough to check their information, a concrete foundation was laid.

This was, as my source put it, holding back her tears, just the beginning. “Now we get to work, now we support them. We do what we can. We bring them meals, we give them hugs, we love them we take their other kids if they have any, and help them with … we do whatever we can.”

I understand that the facts I report will not be as monumental as the pronouncement of the deceased, but I will work on making sure that what I say, while unlikely to be first, will be accurate.

For more images by Hari, see his public albums on Facebook and Google Plus.