Stories of enslaved Missourians were forgotten for decades – until now

ST. LOUIS – The stories of more than 300 enslaved men and women in Missouri who risked their lives to sue their owners for their freedom sat stacked and tucked away in boxes for more than a century.

Now, those civil rights cases, some argued in the old courthouse still standing in St. Louis, have been commemorated with a new bronze sculpture known as the Freedom Suits Memorial. At the base of the 14-foot memorial are the names of enslaved people as well as depictions of court scenes showing them suing for their freedom.

“I felt like all of them were my direct ancestors and that I have a personal responsibility to bring those voices out, to let everyone know that the slave was not a passive, afraid, cowering victim, but that we were freedom fighters from the start,” said St. Louis Circuit Judge David Mason, who’s been at the forefront of bringing greater public awareness Missouri’s “freedom suits.”

Mason said it was not until the 1990s, after cleaning up an old building that city officials found the old lawsuits “folded in half and then in third,” stacked in boxes in “perilous” condition that detailed how these hundreds of people fought for their freedom.

A good number of cases were argued between 1814 and 1860, prior to the start of the Civil War, and for some, before the Dred Scott case. Mason said the theory that underpinned the freedom suits was that, under Missouri law, the enslaved people had reached a status that they were free, but were still being held in the state of slavery. 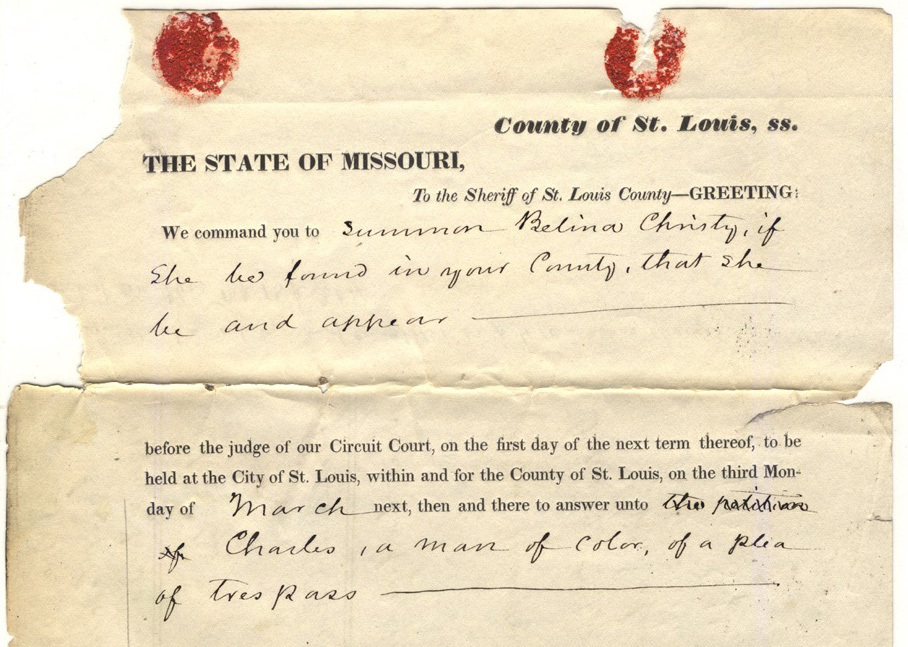 Many of the Freedom Suits only identify the plaintiffs by their first names. This suit, brought forth by a man who is identified as “Charles, a man of color” was filed in 1841. In the end Charles did not win his freedom, according to a National Park Service list of the suits and their outcomes. Photo by: Washington University Libraries

But this was Missouri, a slave state that officially joined the union in 1821 and enslaved people who pursued these legal challenges were up against a white judge, a jury made up of white, male property owners, and faced a deep fear of deadly retribution. However, Missouri’s long-standing judicial standard – “once free, always free” – was key to understanding why so many of these suits went forward and why nearly a third of those who sued won, according to Mason.

READ MORE: At least 70 people were enslaved by the Jesuits in St. Louis. Descendants are now telling their stories

This meant that if you were enslaved and you went into a free state long enough to be under that state’s general standards of residency, then you became free, he explained. And if enslavers forcibly took them back into Missouri, the enslaved people had the right to sue for their freedom.

“Once free, always free” established a civil right to freedom,” he added.

“I like to refer to these cases as our nation’s first civil rights cases.”

Out of the box, into the light

After the handwritten documents were uncovered, the freedom suits eventually were sent to Washington University in St. Louis, where they made their way to David Konig, professor emeritus of history and law professor of law.

He worked with the undergraduate students who carefully unfolded and deacidified the two-centuries-old records, one by one. “Due to the “terrible condition” of the documents, “it really wasn’t until several years after their discovery that they became usable,” Konig said. These archives were then transcribed and digitized for people to view online. However, several groups worked to bring the Freedom Suits to life including the Missouri State Archives, Washington University Libraries, the Missouri History Museum and others.

The documents detailing the freedom suits offered a glimpse into the lives of the people who sued, their stories, their fight, and how the system built against them worked to keep them oppressed.

There are stories like that of Lucy Delaney, the daughter of an enslaved woman named Polly Wash who used the Underground Railroad to escape bondage in St. Louis but was later caught and returned. In 1839, Wash fought back again and sued for her own freedom and ultimately won. She would later help her oldest daughter Nancy file suit and eventually Lucy, who is listed in her suit as Lucy Ann Britton. She argued that her owners David D. Mitchell and his wife were falsely imprisoning her.

In her autobiography, Delaney revealed that her enslaver kept her “‘shut away from the sunlight for seventeen long and dreary months,’ while her case dragged on until she finally gained her freedom,” Konig wrote in a summary on the St. Louis freedom suits.

In the end, according to documents kept by Washington University and the National Park Service, Delaney won, she was now free.

‘One of the worst decisions in the court’s history’

Perhaps the most well-known of the freedom suits is the Dred Scott case. Scott’s pursuit of freedom started in 1846 and lasted roughly 11 years. Scott and his wife argued in court that because they spent time in Illinois and Wisconsin, where slavery was prohibited, they had the legal right to sue for their freedom, a position that had been argued and upheld several times before.

The couple initially lost based on a technicality and then went back and forth in the local and state courts before appealing to the Supreme Court, where their journey to freedom through the court system came to end.

The court delivered its decision on March 6, 1857; neither Scott nor his wife would receive their freedom from the courts end the end. Though eight of the nine justices wrote opinions, Chief Justice Roger B. Taney’s that is often considered the majority. In the decision, he wrote that enslaved people could not be American citizens and therefore did not have the right to sue for their freedom, undoing decades of precedent. He also deemed the 1821 Missouri Compromise unconstitutional, stating Congress could not prohibit slavery in federal territories.

The decision “basically distorted history in a way that is shocking,” Konig said.

READ MORE: Decades after a Missouri town seized a Black doctor’s home, his relatives sought to reclaim his land — and his story

Taney, a devoted slavery supporter, wrote in his racist opinion that African Americans were “beings of an inferior order … so far inferior, that they had no rights which the white man was bound to respect.”

For Konig, who has spent his life teaching both history and law, that 1857 ruling is “one of the worst Supreme Court decisions ever.”

Mason said it’s for that reason we cannot forget about Dred Scott and all those who were courageous enough to challenge a system set up to never deliver them justice.

“As a nation, we have to deal with the Dred Scott decision,” he said.

“Although a bloody Civil War produced three constitutional amendments to reverse that decision, the achievement of full racial, religious, and ethnic equality in this country remains an unfinished project,” Konig said in a speech at the event.

Preston Jackson is the artist behind the silicone bronze sculpture unveiled in downtown St. Louis on Juneteenth. He was brought in on the project about seven years ago.

“I got excited about and still am excited about what this means to my people and to my country, and I really designed this thing that you can’t miss it,” he said. 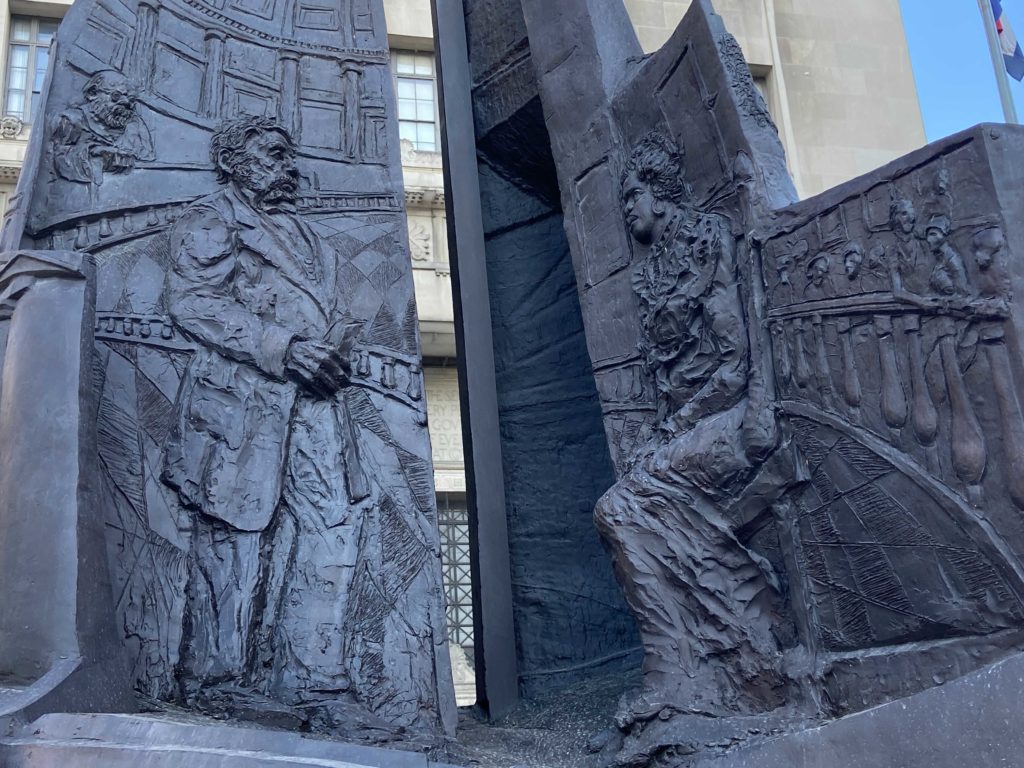 The imagery displayed on the memorial show courtroom scenes with both the plaintiffs and their lawyers making their case. Photo by: Gabrielle Hays

Jackson, who grew up in Decatur, Illinois, remembers visiting family in St. Louis many times throughout his childhood. On those visits, he recalls feeling the city lacked a space that represented Black artists. It was those moments, he said, that granted him a moment to dream.

“I imagined it and pretended that downtown stood one of my pieces and a visualization of what I have to say and I have to offer,” he said.

The memorial, the visualization he dreamed of as a child, stands somewhere around 14 feet tall. It depicts different scenes showing the enslaved sitting in courtrooms with their lawyers making brave bids for their right to be free. Inscribed at the base of the bronze sculpture are the names of those who brought forth suits. In the corner is Jackson’s name, followed by the year 2021.

“I want people of all classes, of all races, of all gender to stand there and say life is worth living, life is worth fighting for because this is a battle, and we are definitely on the right side of history,” he said. “It forces the observer to open their eyes and to see that this is the stuff that we have to overcome, the battle is still on.”

Preston, too, said there’s more story to be told.