WASHINGTON — President Donald Trump has issued a proclamation to deny asylum to migrants who enter the country illegally, tightening the border as caravans of Central Americans slowly approach the United States. The plan was immediately challenged in court.

Trump invoked the same powers he used last year to impose a travel ban that was upheld by the Supreme Court. The new regulations are intended to circumvent laws stating that anyone is eligible for asylum no matter how he or she enters the country. About 70,000 people per year who enter the country illegally claim asylum, officials said.

“We need people in our country, but they have to come in legally,” Trump said Friday as he departed for Paris.

The American Civil Liberties Union and other legal groups swiftly sued in federal court in Northern California to block the regulations, arguing the measures were illegal.

“The president is simply trying to run roughshod over Congress’s decision to provide asylum to those in danger regardless of the manner of one’s entry,” said ACLU attorney Lee Gelernt.

The litigation also seeks to put the new rules on hold while the case progresses. 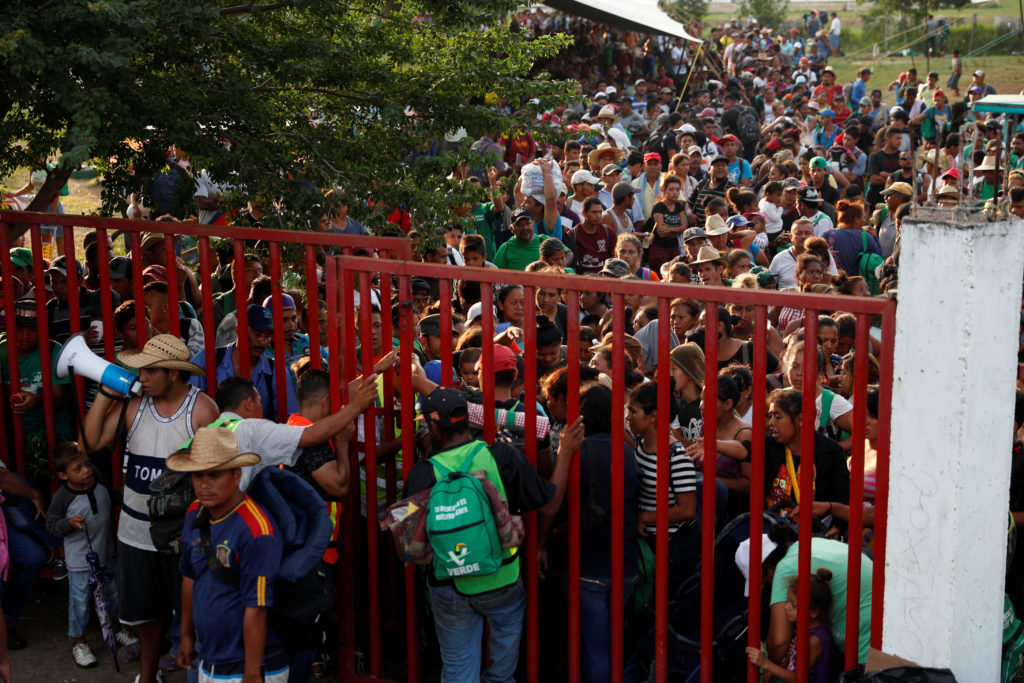 Migrants, part of a caravan traveling en route to the United States, gather as they wait for transportation in Matias Romero Avendano, Mexico November 9, 2018. Photo by Carlos Garcia Rawlins/Reuters

The regulations go into effect Saturday. They would be in place for at least three months but could be extended, and don’t affect people already in the country. The Justice Department said in a statement the regulations were lawful.

Trump’s announcement was the latest push to enforce a hard-line stance on immigration through regulatory changes and presidential orders, bypassing Congress, which has not passed any immigration law reform. But those efforts have been largely thwarted by legal challenges and, in the case of family separations this year, stymied by a global outcry that prompted Trump to retreat.

READ NEXT: ‘We are not killers:’ Migrants in caravan respond to Trump

Officials said the asylum law changes are meant to funnel migrants through official border crossings for speedy rulings instead of having them try to circumvent such crossings on the nearly 2,000-mile border. The U.S. Border Patrol says it apprehended more than 50,000 people crossing illegally in October, setting a new high this year, though illegal crossings are well below historical highs from previous decades.

But the busy ports of entry already have long lines and waits, forcing immigration officials to tell some migrants to turn around and come back to make their claims. Backlogs have become especially bad in recent months at crossings in California, Arizona and Texas, with some people waiting five weeks to try to claim asylum at San Diego’s main crossing.

“The arrival of large numbers … will contribute to the overloading of our immigration and asylum system and to the release of thousands … into the interior of the United States,” Trump said in the proclamation, calling it a crisis.

Administration officials said those denied asylum under the proclamation may be eligible for similar forms of protection if they fear returning to their countries, though they would be subject to a tougher threshold. Those forms of protection include “withholding of removal” — which is similar to asylum, but doesn’t allow for green cards or bringing families — or protection under the United Nations Convention Against Torture.

Homeland Security officials said they were adding staffing at the border crossings to manage the expected crush, but it’s not clear how migrants, specifically families, would be held as their cases are adjudicated. Family detention centers are largely at capacity. Trump has said he wanted to erect “tent cities,” but nothing has been funded.

The U.S. is also working with Mexico in an effort to send some migrants back across the border. Right now, laws allow only Mexican nationals to be swiftly returned and increasingly those claiming asylum are from Central America.

Trump pushed immigration issues hard in the days leading up to Tuesday’s midterm elections, railing against the caravans that are still hundreds of miles from the border.

He has made little mention of the issue since the election, but has sent troops to the border in response. As of Thursday, there were more than 5,600 U.S. troops deployed to the border mission, with about 550 actually working on the border in Texas.

Trump also suggested he’d revoke the right to citizenship for babies born to non-U.S. citizens on American soil and erect massive “tent cities” to detain migrants. Those issues were not addressed by the regulations. But Trump insisted the citizenship issue would be pushed through.

The administration has long said immigration officials are drowning in asylum cases partly because people falsely claim asylum and then live in the U.S. with work permits. In 2017, the U.S. fielded more than 330,000 asylum claims, nearly double the number two years earlier and surpassing Germany as highest in the world.

Migrants who cross illegally are generally arrested and often seek asylum or some other form of protection. Claims have spiked in recent years and the immigration court backlog has more than doubled to 1.1 million cases in about two years, Syracuse University’s Transactional Records Access Clearinghouse reported this week. Generally, only about 20 percent of applicants are approved.

It’s unclear how many people en route to the U.S. will even make it to the border. Roughly 5,000 migrants — more than 1,700 under the age of 18 — sheltered in a Mexico City sports complex decided to depart Friday for the northern city of Tijuana, opting for the longer but likely safer route to the U.S. border.

Similar caravans have gathered regularly over the years and have generally dwindled by the time they reach the southern border, particularly to Tijuana. Most have passed largely unnoticed.

Left: Migrants, part of a caravan traveling en route to the United States, ride in the back of a truck as they hitch a ride near Matias Romero Avendano, Mexico November 9, 2018. Photo by Carlos Garcia Rawlins/Reuters