A powerful alliance of leaders representing American cities, states and business said on Saturday that they would continue to back the Paris climate accord after President Donald Trump announced earlier this year that he would withdraw the United States from the 2015 international agreement.

The group, which calls itself “America’s Pledge,” is led by California Gov. Jerry Brown and former New York City Mayor Michael Bloomberg. They made the announcement after presenting a report in Germany during the 23rd U.N. Climate Change Conference, known as COP23, where hundreds of nations gathered to discuss global warming.

The 127-page report addresses the “scope and scale of non-federal climate action” in the U.S., and also lays out actions taken by the groups involved in America’s Pledge, who combined represent trillions of dollars in the U.S. economy. At least 20 states, 110 cities and more than 1,000 businesses and universities have declared support for the accord.

“The group of American cities, states, and businesses who remain committed to the Paris Agreement represents a bigger economy than any nation outside the U.S. and China,” Bloomberg said in a statement. “In Paris, the U.S. pledged to measure and report our progress reducing emissions alongside every other nation. Through America’s Pledge, we’re doing just that, and we’re going to continue to uphold our end of the deal, with or without Washington.” 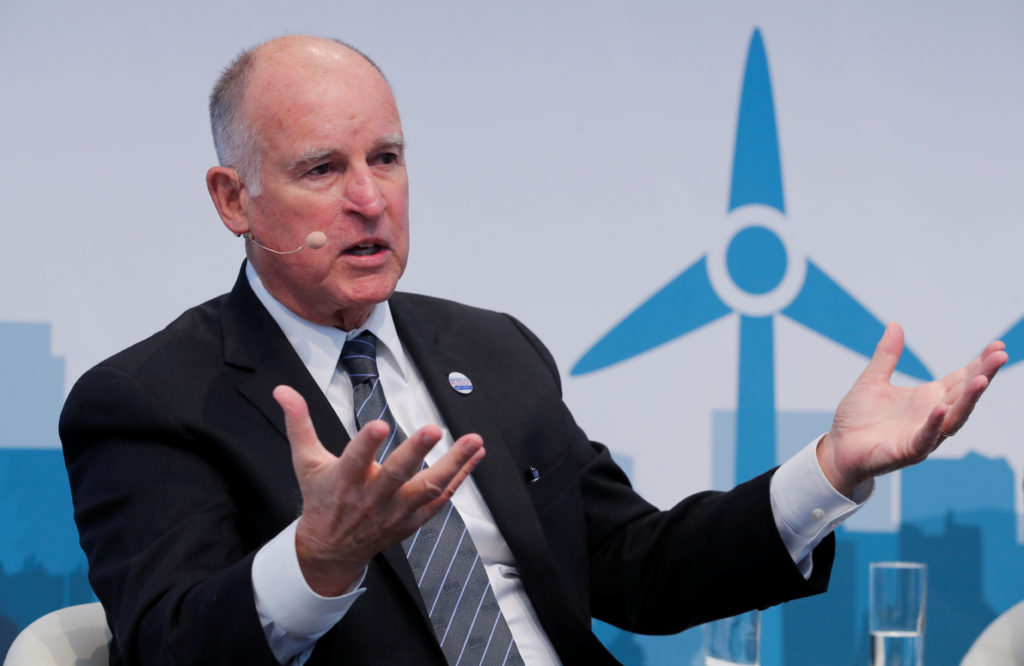 But members of the alliance also conceded that they would not be able to meet all of the commitments of the accord without the support of the federal government.

“We need to do more,” said Brown, California’s governor. “We have to get off oil and gas. But we’ve got to get off coal first. Unfortunately in politics we don’t have a magic wand.”

The international Paris agreement is attempting to drastically reduce worldwide carbon emissions, largely from the use of fossil fuels for energy production, which are bringing widespread weather changes and rising sea levels.

President Barack Obama, who committed the U.S. to the agreement, had set the goal of reducing U.S. emissions from 2005 levels by up to 28 percent by 2025.

The U.S. remains the only country in the world that has spurned the Paris accord, after Syria and Nicaragua signed on to the agreement in recent weeks.

Left: A man walks over a projection on the floor reading "America's pledge #wearestillin" during the COP 23 UN Climate Change Conference hosted by Fiji but held in Bonn, Germany November 11, 2017. Photo By Wolfgang Rattay/Reuters