PARIS (AP) — Megan Rapinoe went from controversy to triumph, scoring twice for the United States in the much-anticipated clash with host France to send the defending champions into the semifinals of the Women’s World Cup with a 2-1 victory Friday night.

France had been vying to become the first nation to simultaneously hold the men’s and women’s World Cup trophies but fell well short as their aggressive play, home-field advantage and flag-waving crowd that belted out La Marseillaise failed to faze the ever-confident U.S. team.

“We hit them where it hurt. We took our chances.”

“I mean, you have to give it up to the French team. I think they outplayed us for sure with the ball, but we were so good defensively, so strong. We hit them where it hurt. We took our chances,” Rapinoe said. “This team — unreal, unreal amount of heart.”

Rapinoe, who was called out on social media by President Donald Trump after video surfaced of her saying she wouldn’t visit the White House if the United States won in France, now leads the top-ranked Americans to Lyon to face No. 3 England on Tuesday in the semifinals.

Rapinoe scored on a free kick in the fifth minute that bounced between French players and past goalkeeper Sarah Bouhaddi. After scoring, she went to the corner and raised both arms in celebration for the U.S. fans in the sold out Parc des Princes stadium.

MORE: The U.S. women’s soccer team offers a cultural story, not just an athletic one

She raised her arms again in the 65th minute after blasting a cross from Tobin Heath that Bouhaddi dove for but couldn’t stop. It was her fifth goal of the tournament.

Fourth-ranked France pulled back on Wendie Renard’s header off Gaetane Thiney’s free kick in the 81st. It was the 6-foot-2 defender’s fourth World Cup goal.

“It did live up to expectations, I’m happy to say that,” U.S. star Alex Morgan said.

The U.S. team is used to grabbing attention both on and off the field. Rapinoe was caught up in a controversy this week when a video surfaced of her using an expletive while vowing not to visit the White House. While the interview was from January, it attracted the president’s attention and he tweeted: “Megan should never disrespect our Country, the White House, or our Flag, especially since so much has been done for her & the team.”

A day before the match, Rapinoe said she stood by her comments , except the coarse language. Rapinoe, who also had a pair of goals on penalty kicks in the United States’ 2-1 victory over Spain to open the knockout stage, even suggested the uproar might help her team. “I think, if anything, it just fires everybody up a little bit more,” she said.

On Friday, Rapinoe credited the U.S. defense for a “huge performance.” 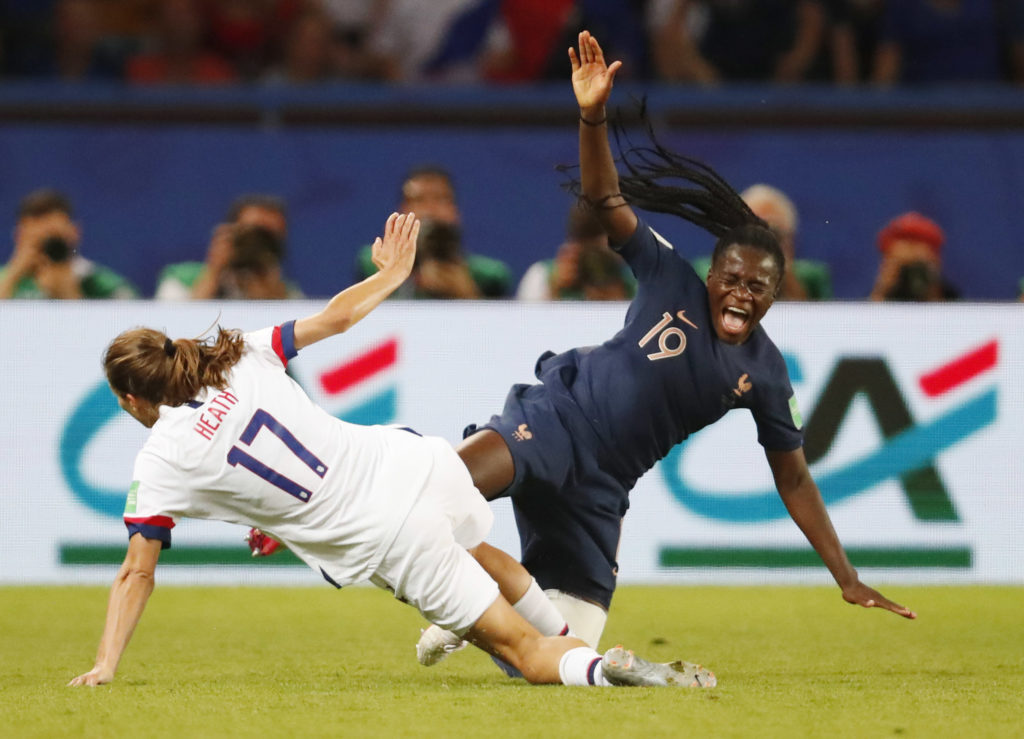 U.S. defenders repeatedly kept the aggressive French team at bay and goalkeeper Alyssa Naeher was stellar in the second half, fighting off a flurry of attempts until Renard’s header.

The Americans have played the French 24 times, with France winning just three. But the three matches prior to Friday’s quarterfinal had tilted toward France, with two wins and a draw. The last meeting was a friendly in January, when Kadidiatou Diani, who wasn’t named to France’s World Cup roster, scored twice in a 3-1 victory.

“The media and fans and everyone bought into this being a final being played as a quarterfinal match. And it was. I feel like it was a great match,” Morgan said. “I think we have the edge on them in World Cups and major tournaments, but lately they’ve had the edge on us with friendlies. So I think it was a great match for both of us.”

Because of the loss Friday, France does not qualify for the 2020 Olympics. The top three European finishers at the World Cup qualify.

“Yes, it is a failure on a footballing level,” France coach Corinne Diacre said. “I don’t think we should shy away from that.”

Les Bleues also reached the quarterfinals at the 2015 World Cup in Canada but fell to Germany on penalties after a 1-1 draw. The team’s best finish at the tournament was fourth in 2011 after losing 2-1 in the third-place match to Sweden.

The victory over Les Bleues was Jill Ellis’ 125th match as the U.S. coach, surpassing April Heinrichs for the career record.

The United States already has three World Cup trophies, most of any nation. The Americans emphatically beat Japan 5-2 to win in Canada four years ago.