As the U.S. women’s soccer team celebrated their fourth World Cup victory with trophies, medals and confetti in Lyon, France, on Sunday, fans in the stadium signaled their support with a resounding chant of “equal pay, equal pay,” and the team’s leader declared “we’re done with” asking whether female athletes are “worth it.”

The fans’ chants for equity came as FIFA’s president, Gianni Infantino, stepped onto the award ceremony stage. Infantino has been criticized, along with the sport’s governing body, for failing to invest more money in women’s soccer and player pay.

But as the U.S. women returned home Monday, the more immediate fight lies with their own nation’s sport governing body, U.S. Soccer Federation, whom they’ve sued for equal pay.

The public support on display Sunday, buttressed by their record number of World Cup wins, could give the women greater leverage as they begin mediation.

“The fact that the stadium erupted into an equal pay chant shows there is more of a grassroots swell of support and understanding of the issue at hand,” said Sarah Axelson, senior director of advocacy at the Women’s Sports Foundation, the nonprofit founded by tennis player Billie Jean King to expand access to women’s sports.

How much are women’s players paid?

The fight over fair pay in women’s soccer has been waged for years, without much resolution.

Players have broached the issue with both the U.S. Soccer Federation (USSF) and the Fédération Internationale de Football Association (FIFA), the international governing body for the sport, in different ways.

Twenty-eight current and former members of the U.S. Women’s National Team sued the U.S. Soccer Federation in March, ahead of the World Cup, with the argument that they are not being paid or treated fairly compared to their male counterparts.

The team filed a similar complaint with the Equal Employment Opportunity Commission in 2016 that resulted in a collective bargaining agreement with better pay, although the exact terms have not been publicly disclosed. The athletes have said it was the best deal they could get at the time, but it does not put them on equal footing with the U.S. male players. 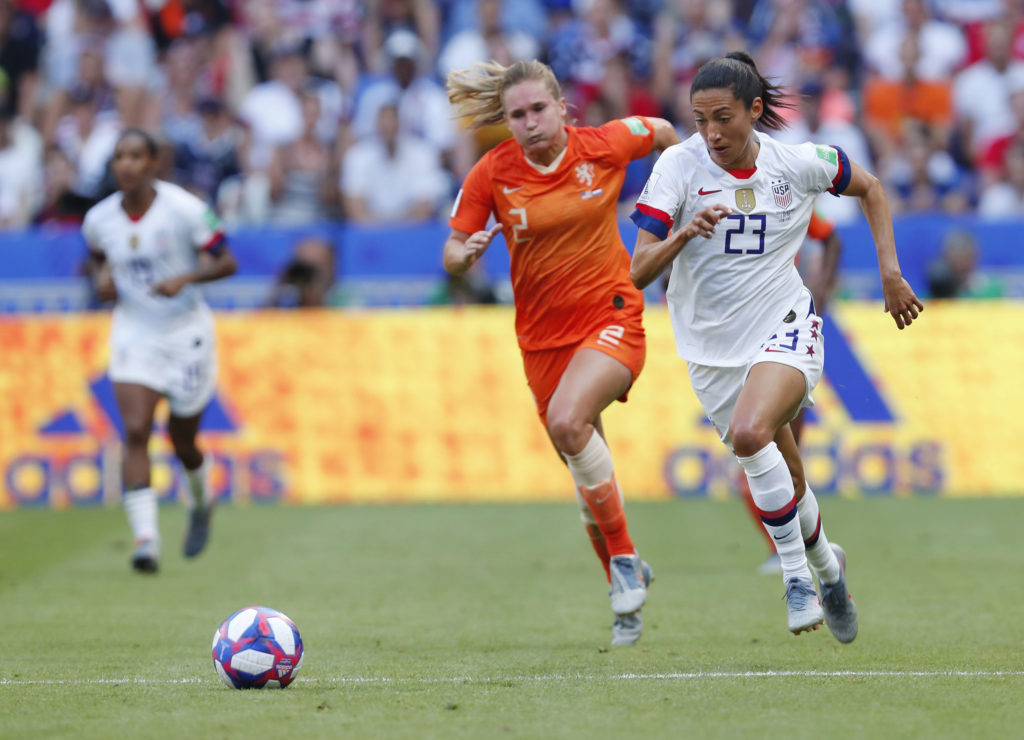 It’s a disparity that is top of mind for many as the players bring home the World Cup trophy.

“At this moment of tremendous pride for America, the sad equation remains all too clear, and Americans won’t stand for it anymore,” said Molly Levinson, the spokesperson for the women’s national team players in their equal pay suit. “These athletes generate more revenue and garner higher TV ratings but get paid less simply because they are women. It is time for the Federation to correct this disparity once and for all.”

Based on those figures, a top-tier women’s national player would earn 38 percent of the compensation of a comparable men’s player, the suit says.

Meanwhile, Sunday’s match drew more than 14 million TV viewers in the U.S., making it one of the most watched soccer broadcasts ever, according to Nielsen ratings. The 2015 World Cup final between the U.S. women’s team and Japan brought in 25.4 million viewers.

“The USSF has no legitimate, non-discriminatory reason for this gross disparity in pay, nor can it be explained away by any bona fide seniority, merit or incentive system or any other factor other than sex,” the suit said. 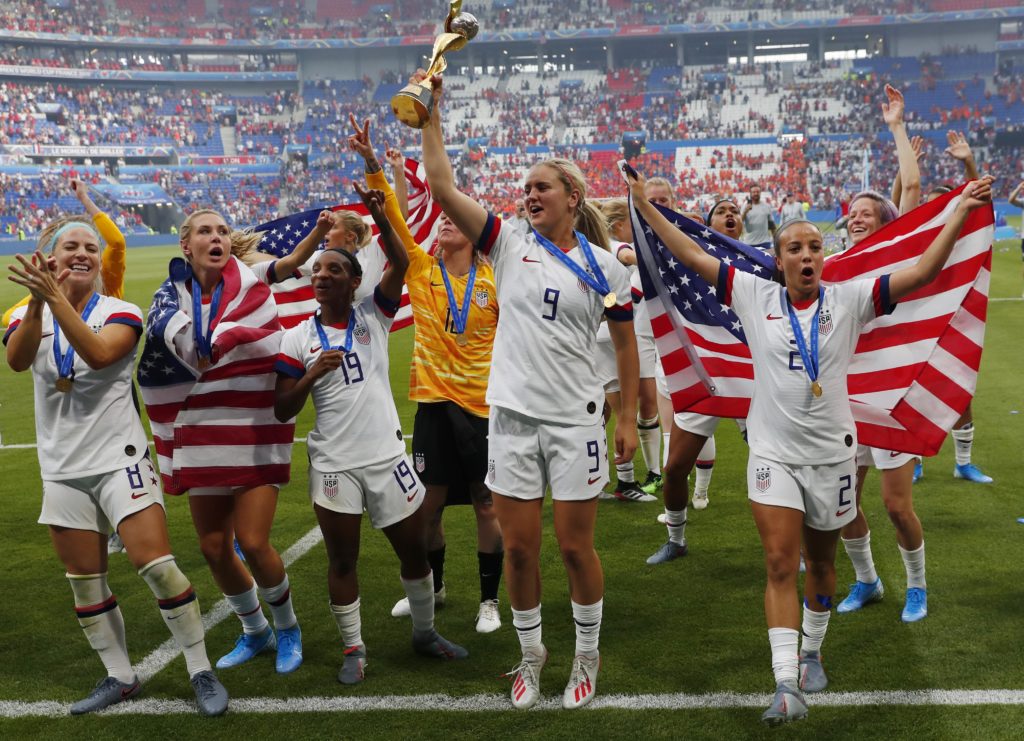 The USSF did not return a request for comment from the PBS NewsHour, but in an earlier response to the lawsuit, the organization, which runs both the men and women’s teams, said the two teams are “physically and functionally separate organizations that perform services for U.S. Soccer,” and therefore “receive fundamentally different pay structures for performing different work under their separate collective bargaining agreements that require different obligations and responsibilities.”

People who defend the USSF point out that part of the pay disparity comes from FIFA’s payout to players in the World Cup.

Rapinoe, who has been vocal in the fight for equal pay, said the increases would only widen the pay gap.

The men’s World Cup does bring in substantially more revenue than the women’s tournament.

But FIFA has also been sharply criticized for failing to promote the women’s tournament. Journalists noted that there was little marketing in France to show that the World Cup was taking place there this year.

Before the championship match, Rapinoe called out FIFA for scheduling two other final men’s games on the same day as the Women’s World Cup finals, a move that could have cut into viewership. “If you really care, are you letting the gap grow? Are you scheduling three finals on the same day? No, you’re not,” Rapinoe said ahead of the World Cup finale.

FIFA is a separate organization from U.S. Soccer, but some have called for the U.S. governing body to step up where FIFA has not. That could include paying the women more for their World Cup wins.

“Just because FIFA has not properly supported or valued women’s soccer is no excuse for an organization like U.S. Soccer to do the same,” said Hampton Dellinger, a lawyer who represented women soccer players in a lawsuit against FIFA in 2015.

And when it comes to revenue brought in by the U.S. teams, recent numbers show that the women are outpacing the men.

The women’s national team was responsible for half of the USSF’s revenue from all games since 2016, according to a Washington Post analysis of previously undisclosed U.S. Soccer documents. In 2016 and 2017, the women’s team brought in a net revenue of $8 million, while in 2015 and 2016, the men had a net of $350,000, the documents showed.

What could move the needle?

The U.S. women’s team has steadily garnered more public support since its first World Cup wins in 1991 and 1999.

“We have brought soccer in this country to a level that never would have been achieved had we not won. We brought it mainstream,” former U.S. soccer goalkeeper Briana Scurry, who played on the 1999 team, told the NewsHour in a phone interview. 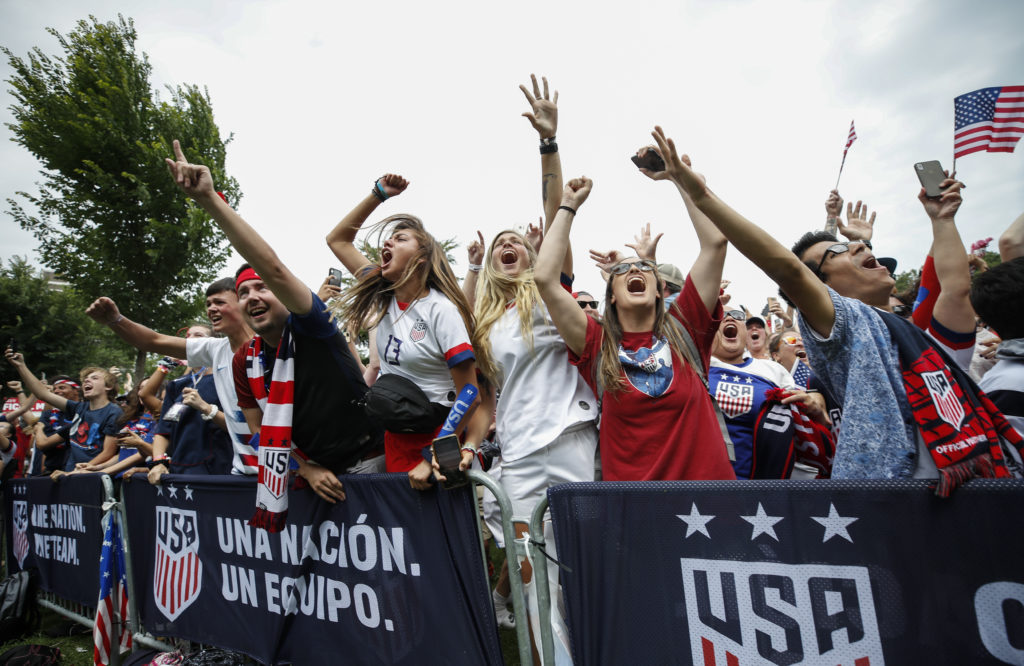 Building on the success of former players, the team has expanded its audience. More televised games, increased press coverage and social media have made many of the players household names.

At the same time, the team retains a passionate base of supporters that pride themselves on having insider knowledge about the players’ lives, including their coffee habits and nicknames — a dedication that can translate into more ticket and merchandise sales, as well as ad revenue.

The players may now be able to harness the momentum of their most recent victory to earn a better pay deal, just like they did in 2016 after the 2015 World Cup.

In the past, Scurry said, USSF was able to wait out the momentum until it dies down. There is a three-year gap between the U.S. Olympics and the next World Cup, which can make it difficult to keep the national team on the public’s radar.

But, Scurry added, “I think it’s different now. The environment is different. The visibility is different and the society in this country is sick of women being taken advantage of.”

Still, the players’ case will be stronger if they can show how that popularity can translate into more revenue.

And their supporters say they are already demonstrating just that: Nike said last month that the USA women’s home jersey was the No. 1 soccer jersey ever sold online in a single season.

Left: U.S. soccer players Julie Ertz (left), Megan Rapinoe (center) and Alex Morgan celebrate as they exit the plane with the Trophy for the FIFA Women's World Cup while the U.S team arrive at the Newark International Airport, in Newark, New Jersey, on July 08, 2019. Photo by Eduardo Munoz/Reuters