Union votes to strike at General Motors’ US plants

DETROIT — The United Auto Workers union announced Sunday that its roughly 49,000 workers at General Motors plants in the U.S. would go on strike just before midnight because contentious talks on a new contract had broken down.

About 200 plant-level union leaders voted unanimously in favor of a walkout during a meeting Sunday morning in Detroit. Union leaders said the sides were still far apart on several major issues and they apparently weren’t swayed by a GM offer to make new products at or near two of the four plants it had been planning to close, according to someone briefed on the matter.

“We stood up for General Motors when they needed us most,” union Vice President Terry Dittes said in a statement, referring to union concessions that helped GM survive bankruptcy protection in 2009. “Now we are standing together in unity and solidarity for our members.”

It’s still possible that bargainers could return to the table and hammer out an agreement, but union spokesman Brian Rothenberg said at a news conference that it would be unlikely because it is hard to believe they could resolve so many issues before 11:59 p.m. 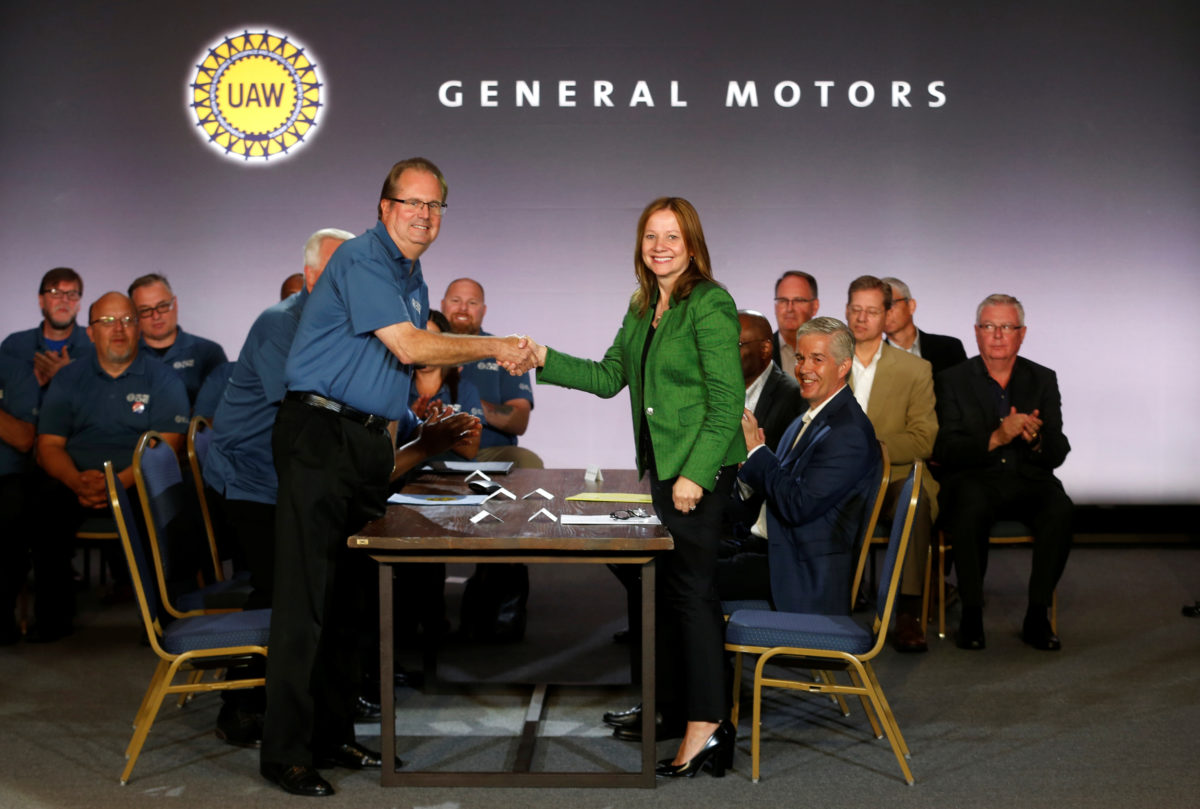 GM on Friday offered to build a new all-electric pickup truck at a factory in Detroit that is slated to close next year, according someone who spoke to The Associated Press on the condition of anonymity because that person wasn’t authorized to disclose details of the negotiations, which hadn’t been released to the public. The automaker also offered to open an electric vehicle battery plant in Lordstown, Ohio, where it has a plant that has already stopped making cars. The new factory would be in addition to a proposal to make electric vehicles for a company called Workhorse, the person said.

It’s unclear how many workers the two plants would employ. The closures, especially of the Ohio plant, have become issues in the 2020 presidential campaign. President Donald Trump has consistently criticized the company and demanded that Lordstown be reopened.

UAW spokesman Brian Rothenberg said the company made general statements about why it is planning to strike, but he would not comment further on GM’s offer. The union said it would strike for fair wages, affordable health care, profit sharing, job security and a path to permanent employment for temporary workers.

In a statement, GM also said the offer made to the union on Saturday included more than $7 billion in U.S. factory investments and the creation of 5,400 new positions, a minority of which would be filled by existing employees. GM would not give a precise number. The investments would be made at factories in four states, two of which were not identified.

The statement also said the company offered “best in class wages and benefits,” improved profit sharing and a payment of $8,000 to each worker upon ratification. The offer included wage or lump sum increases in all four years of the deal, plus “nationally leading” health benefits.

The announcement came hours after the union let its contract with GM expire Saturday night.

On Saturday, Dittes, the union’s chief bargainer, said in a letter to GM members that after months of bargaining, both the union and GM were far apart on issues such as wages, health care, temporary employees, job security and profit-sharing. The letter to members and another one to GM were aimed at turning up the pressure on GM negotiators.

A strike would bring to a halt GM’s U.S. production, and would likely stop the company from making vehicles in Canada and Mexico as well. That would mean fewer vehicles for consumers to choose from on dealer lots, and it would make it impossible to build specially ordered cars and trucks.

The strike would be the union’s first since a two-day work stoppage at GM in 2007.

On Friday, union leaders extended contracts with Ford and Fiat Chrysler indefinitely, but the pact with General Motors was still set to expire Saturday night.

The union picked GM, which is more profitable than Ford and Fiat Chrysler, as the target company, meaning it’s the focus of bargaining and would be the first company to face a walkout.

Talks between the union and GM were tense from the start, largely because GM plans to close four U.S. factories, including the one on the Detroit border with the enclave of Hamtramck, and Lordstown. The union has promised to fight the closures.

Here are the main areas of disagreement:

— The union also wants new products for the four factories GM wants to close. The factory plans have irked some workers, although most of those who were laid off will get jobs at other GM factories. GM currently has too much U.S. factory capacity.

— The companies want to close the labor cost gap with workers at plants run by foreign automakers. GM pays $63 per hour in wages and benefits compared with $50 at the foreign-owned factories. GM’s gap is the largest at $13 per hour, followed by Ford at $11 and Fiat Chrysler at $5, according to figures from the Center for Automotive Research.

— Union members have great health insurance plans and workers pay about 4% of the cost. Employees at large firms nationwide pay about 34%, according to the Kaiser Family Foundation. The automakers would like to cut costs.