LANSING, Mich. — Democrats were quick to back working-class United Auto Workers in their strike against General Motors, delivering doughnuts and holding picket signs outside factories to show solidarity. It’s a union they long have aligned with politically.

There were no doughnuts from Republicans.

Led by President Donald Trump, GOP officials have largely avoided taking sides in the strike that threatens to upend the economy in Michigan, an election battleground, a year before the 2020 vote. Both here and nationally, most Republicans said little about the substance of the dispute beyond hope for a speedy resolution.

The muted response reflects the tricky politics of labor for Republicans.

Trump has made inroads with members of some unions, due partly to promises to get tough on trade and keep manufacturing jobs in the United States. The message pulled key voters away from their Democratic union bosses, who Trump argues are corrupt.

But a strike prompted in part over GM’s plan to close American plants highlights Trump’s unfulfilled promises on manufacturing and gives Democrats a chance to play up their union credentials.

Democratic presidential candidate Elizabeth Warren planned to show up on the picket line in Michigan on Sunday, with rival Bernie Sanders expected this coming week. Nearly all the candidates have tweeted support for the workers.

Trump is in a bind.

Backing the union would undermine Trump’s message that labor does not advocate for its workers and give a powerful Democratic force a boost before an election.

Siding with GM would call into question his promises to defend workers and he would risk getting blamed for economic woes in Rust Belt states he needs to win reelection. 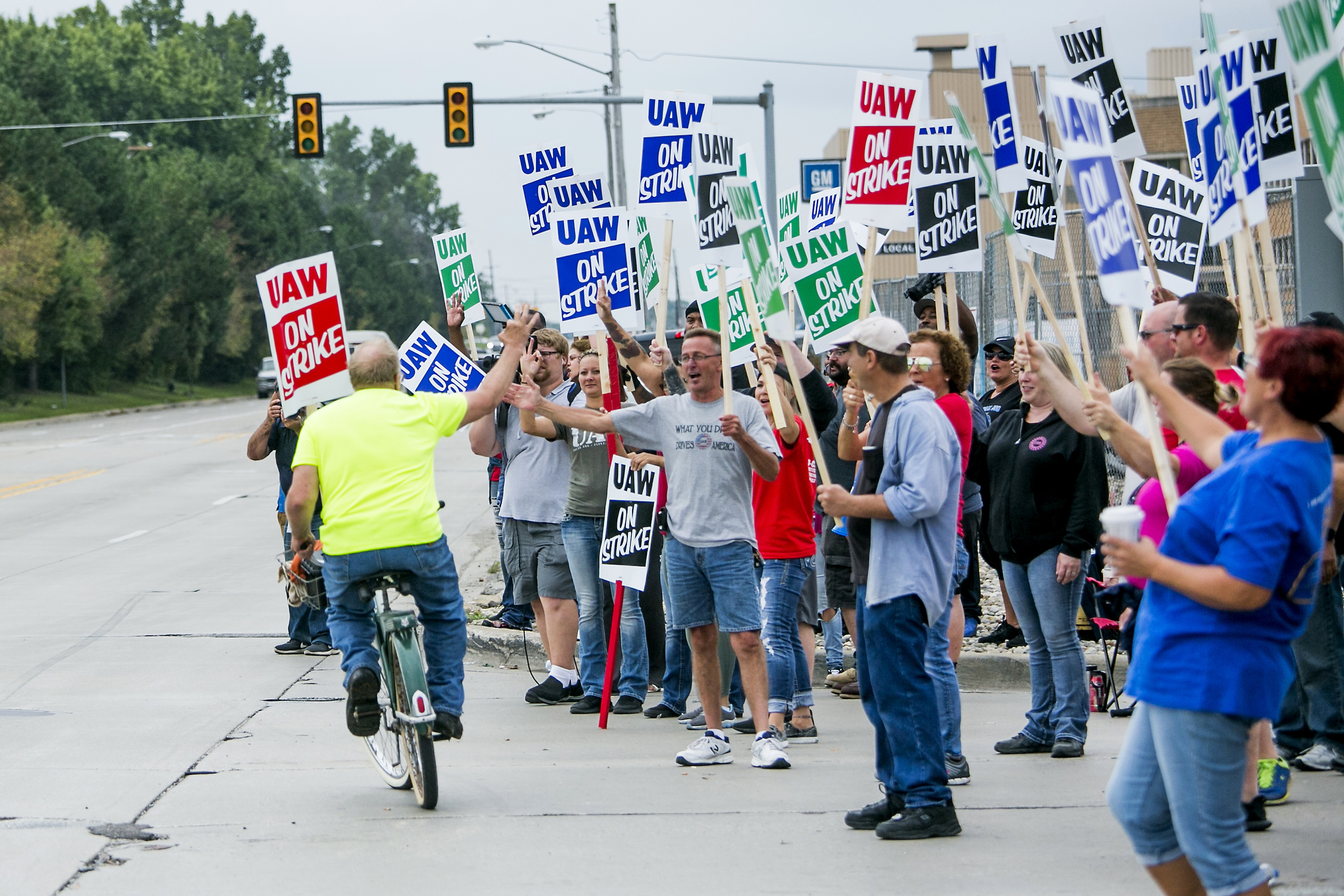 Demonstrators wave at a cyclist riding past during a United Auto Workers (UAW) strike outside the General Motors Co. Flint Assembly plant in Flint, Michigan, U.S., on Monday, Sept. 16, 2019. The UAW union is leading its first strike against General Motors in 12 years, digging in for a fight over jobs and benefits that could cost the carmaker dearly for an indefinite period. Photographer: Anthony Lanzilote/Bloomberg

His task gets tougher the longer the strike goes on.

“There is a history of this issue being treacherous in Michigan,” said Michigan State University political scientist Matt Grossmann. He noted that Republican Mitt Romney’s presidential campaign suffered in 2012 when Democrats pointed repeatedly to an opinion article he wrote opposing the auto bailout. The headline: “Let Detroit Go Bankrupt.”

“It is treacherous to be against the autoworkers,” Grossmann said.

The president has appeared mindful of the dilemma, saying little about the strike. On Monday, the first day of the walkout, he told reporters at the White House the dispute was “sad” and he made a distinction between workers and their union leaders.

“I don’t want General Motors to be building plants outside of this country,” he said. “My relationship has been very powerful with the auto workers — not necessarily the top person or two, but the people that work doing automobiles.”

The strike is playing out as a federal corruption investigation against top UAW officials widens. The FBI raided UAW President Gary Jones’ suburban Detroit home last month and prosecutors have charged 11 people in the investigation so far, leading many of the 49,000 workers nationwide to question whether leaders have their backs .

Trump may be wise to try to separate union workers from their leaders.

Although union members have historically supported Democrats, Trump’s promises to rewrite free trade agreements appeared to resonate with many in manufacturing areas. Nationally, union members were just slightly more likely than other voters to support Democrats in 2018, when the party gained control of the House. Six in 10 union voters supported Democratic candidates in House races, according to AP VoteCast, a survey of more than 115,000 midterm voters nationwide.

But Trump has struggled to make good on promises to stop companies from shipping jobs overseas.

From the first announcement in 2018, he was quick to criticize GM for wanting to close U.S. plants, an issue at the center of current fight. He met with CEO Mary Barra at the White House on Sept. 5, days after suggesting the company should move jobs from China to the U.S. GM has not been persuaded yet. 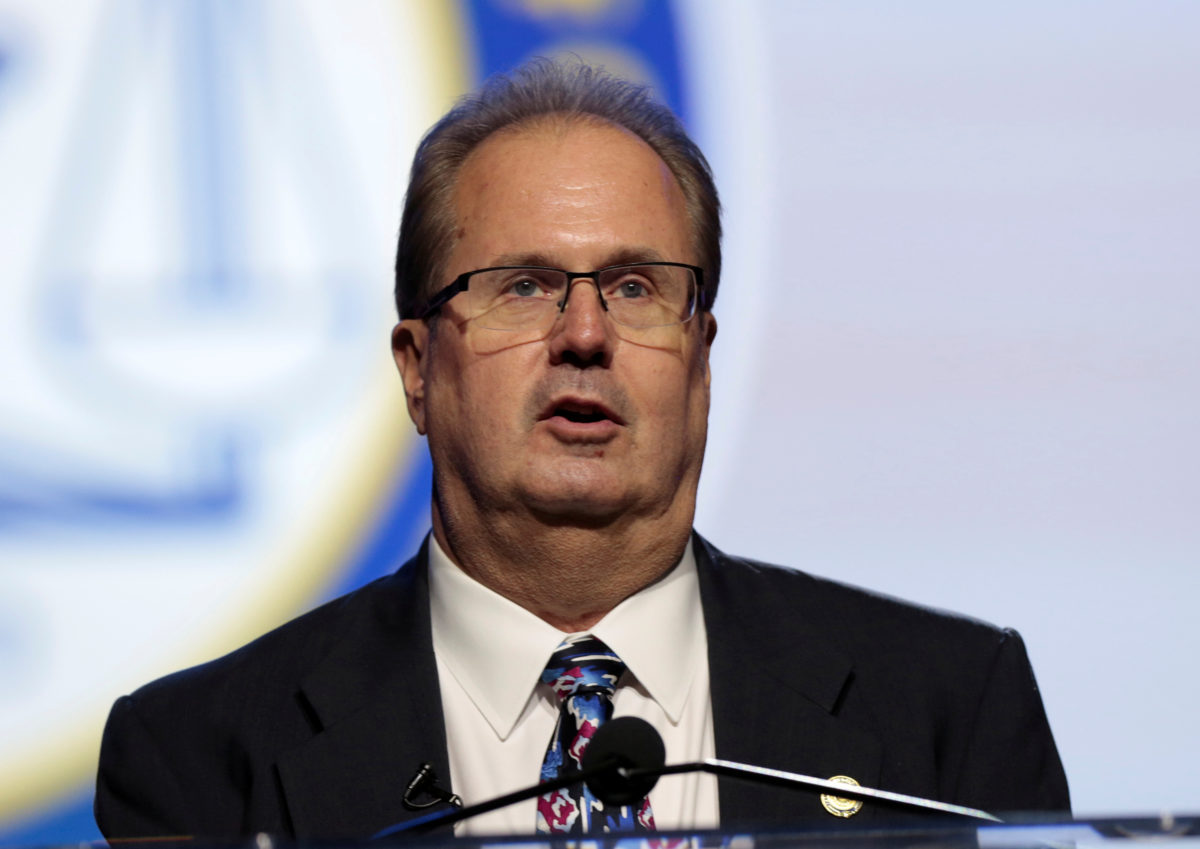 Trump’s escalation of the trade war with China has hurt manufacturers, with factories in Michigan, Wisconsin and Pennsylvania shedding workers since the end of 2018, according to the Bureau of Labor Statistics.

His administration’s decision to stop California from setting its own emission standards for cars and trucks also has created uncertainty in the industry.

“If this strike goes into a second week, you’re going to see parts of Michigan go into a recession,” said Patrick Anderson, CEO of the Anderson Economic Group, an East Lansing-based consulting firm whose work includes analyzing the auto industry. “Parts of Michigan are feeling it today. You’re already seeing losses in income and people cutting back on their spending.”

There is some expectation that Trump will intervene in an attempt to prevent that. But the White House denied a report this past week that it engaged in talks with the company and the union.

Michigan-based Republican strategist John Sellek said he believes Trump is on the side of the workers but is trying to “thread the needle” and not “blow up” GM’s offer to save a plant or two.

“That fits his electoral victory path, and it fits his policy positions on trade,” he said. “He’s walking a more careful path rhetorically for now. But if he decides on any given day that it’s time to jump in with both feet, we shouldn’t be surprised that he does.”

GM’s proposal includes creating an electric vehicle battery assembly plant in Lordstown, Ohio, where the company is in the process of closing a small-car assembly plant. In addition, GM would pay for an electric pickup truck that would go into the Detroit-Hamtramck plant, which the company also wants to close.

The Lordstown facility would offer lower wages, according to a person briefed on the matter who was not authorized to publicly discuss the matter and spoke on condition of anonymity. The union wants to add jobs that pay the top UAW wage.

GM workers who were picketing Friday outside the Grand River factory in Lansing — one that makes Cadillacs and Chevy Camaros — were mixed on whether Trump should weigh in. Many said their top priority is giving temporary workers a path to permanent jobs. Others also want commitments that vehicles would be made in the U.S.

Keith Cannon, 47, of Lansing, said Trump, whom he does not back, should engage. He interpreted Trump’s remarks about the strike as being supportive of workers.

“It’s important because it affects the country he’s running,” said Cannon, a 19-year GM worker who as a UAW district committeeman represents workers in disputes with management. “He should weigh in on it because ultimately we affect the community. You have restaurants, stores, businesses that rely on us to support them as much as they support us with their services.”

Cannon said he cannot spend much locally while living on strike pay of only $250 per week.