‘It is very difficult to reach anyone.’ Ukrainians in the U.S. despair watching Russian invasion from afar

NEW ORLEANS – For a Ukrainian maritime worker stuck on his vessel anchored in the Mississippi River, there is already the feeling of a man without a country. His ship arrived this week at the Port of New Orleans, and his work on the large tanker is finished. But, with a war raging 6,000 miles away in Ukraine and air travel halted, he worries he can’t get back to his home country.

He sought advice from Edward Hayes, the Honorary Consul of Ukraine to Louisiana, who shared the story as one of several he’s heard from Ukrainians as the conflict with Russia has intensified. “He sent me a panicked email … He didn’t know what he was going to do or where he would stay. He’s very concerned he won’t be able to go home because of the war,” Hayes told the PBS NewsHour. “He’s in a tough spot and didn’t know if he should seek refugee status. So he’s asked me for humanitarian aid and asked me to reach out to the Ukrainian Embassy to see if he could ever go home.”

Hayes has been screening this kind of problem for weeks now. The Consul’s office in the city is commissioned through the United States Department of State. It represents the interest of Ukraine for the local community in New Orleans, much like an embassy. Hayes offers help to local Ukrainians, estimated to be in the thousands, with everything from visas to legal assistance. Along with Ukrainians who live in the area permanently, there is also a diaspora community that includes maritime workers who regularly work on ships that pass through the state’s ports along with workers on temporary visas.

Several weeks ago, as the Russia-Ukraine conflict intensified, he said another Ukrainian contacted the office to get help to leave New Orleans and travel to his country to fight. He wonders what will become of the man as he waits for word about what happened.

“We’ve seen the distress that Russia has caused all of these areas.”

“It really hits me hard when you listen to a young man’s story who may not come back,” he said. “He may be going back to his death. Those are the stories on a human level that are really difficult.”

Ukrainians across the country and the world are sharing these fears and uncertainty as Russian troops advance farther toward the capital of Kyiv. The human toll of the war troubles the Fielkow family in New Orleans, too. In 2007, Arnie Fielkow and his wife, Susan, adopted two girls, then aged 2 and 5, from a Ukrainian orphanage. Since then, the couple’s affection and connection to Ukraine have grown. The breaking news alerts have been unbelievable. 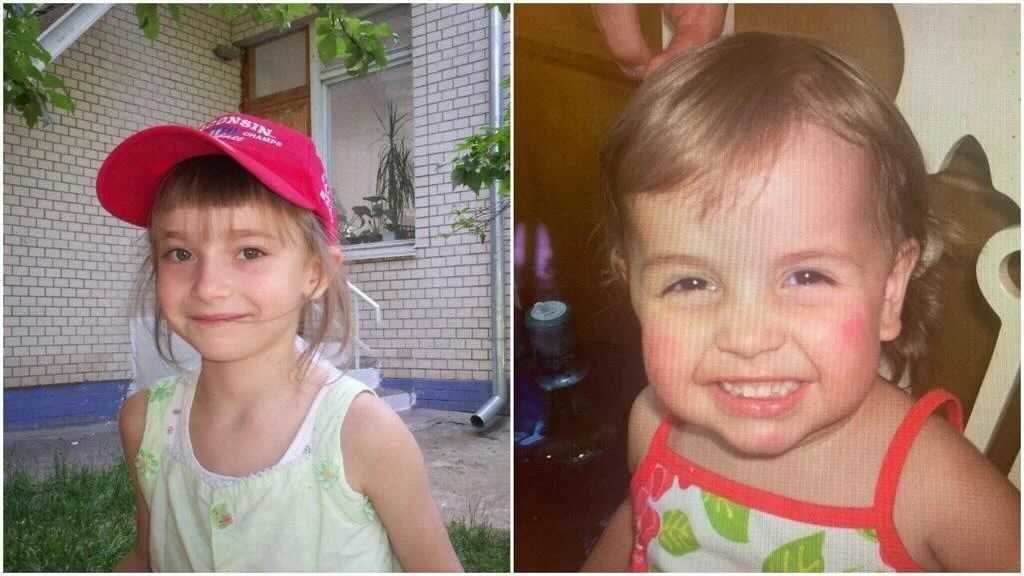 Yana Fielkow (l) is shown here at the orphanage in Ukraine as a child. Seta Fielkow (r) is seen here in a photo shortly after her adoption. Photo by Fielkow family

“It’s a heartbreaking situation to see the events that are unfolding in Ukraine. I feel so bad for the Ukrainian people and, candidly, angry at Putin and the Russian Federation. There is truly no need for the type of aggression that we are witnessing,” Arnie Fielkow, a former New Orleans Saints executive and city council member, told the NewsHour. “From the beginning, we took a love for Ukraine. We have seen that they were very proud of their heritage and history and very kind people. We’ve since gone back a couple of times and visited. But sadly, we’ve seen the distress that Russia has caused all of these areas.” 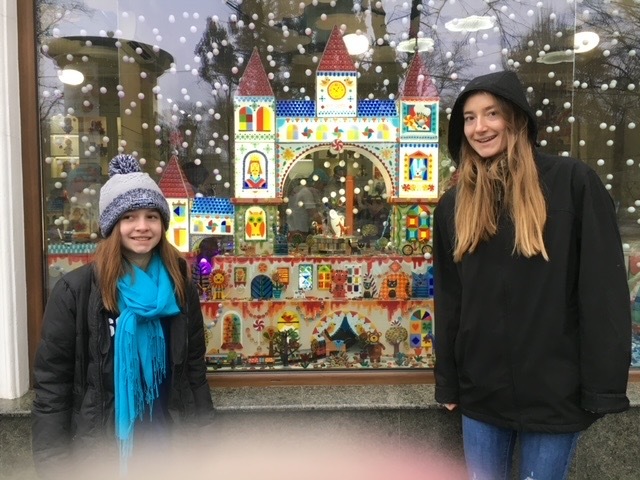 Yana and Sveta Fielkow, who were adopted from Ukraine 15 years ago, are pictured here posing in front of a toy store while on a recent trip. They worry for two sisters who remain in their home country. Photo by Fielkow family

The Fielkow daughters are now 20 and 17 years old. Yana, the eldest, was in her college Russian class as the news was developing Thursday morning. After an exhaustive search, the daughters were only recently connected with their two sisters who remain in Ukraine. The bonds have grown and now the worry grows.

“I am feeling very distressed, very depressed, and very worried for not only my sisters in Ukraine but also the whole country.”

“I am feeling very distressed, very depressed, and very worried for not only my sisters in Ukraine but also the whole country,” Yana Fielkow texted the NewsHour. “I love Ukraine and am very proud of my country so hearing and reading the news just makes me cry. I haven’t been able to think about anything other than my sisters and their safety and I am just praying that they will be okay.”

“To watch tanks rolling into Ukrainian cities and Russian airplanes in Ukrainian airspace is truly heartbreaking. Anyone that is watching can see thousands of people sheltering in subway tunnels,” Arnie Fielkow said. “It is a scene almost out of WWII in London. People are hiding in the underground in order to avoid a full-fledge attack and bombing. It is almost unbelievable.”

Fielkow is concerned thinking about how far the war will go. As his daughters have grown older, “ you can see their connection to their country.” 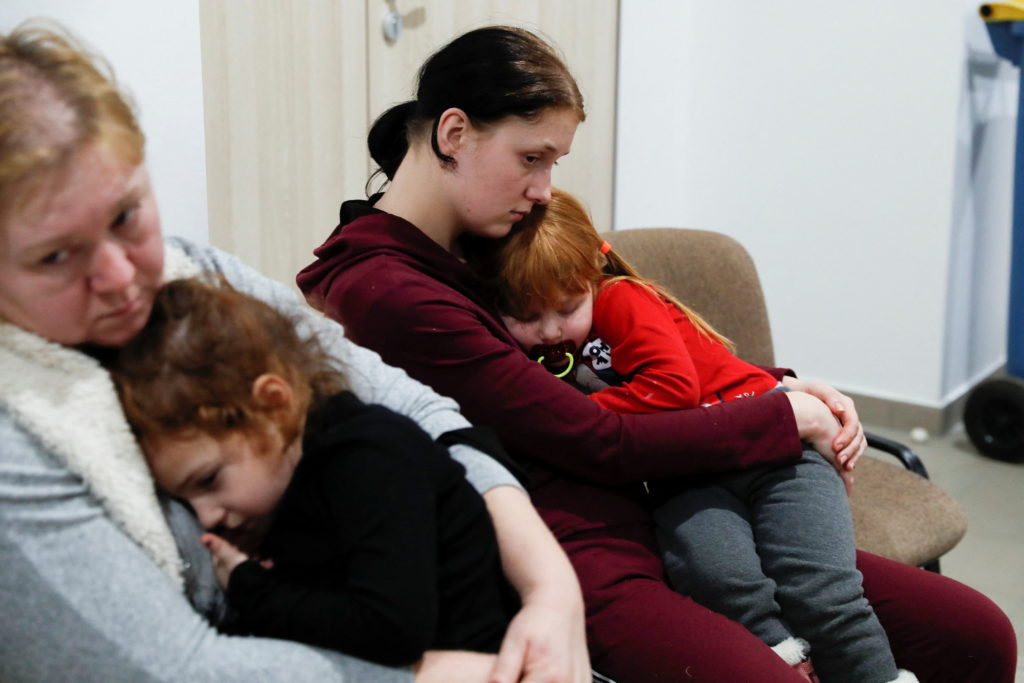 People rest at a refugee shelter in a culture house, after Russia launched a massive military operation against Ukraine, in Zahony, Hungary. Photo by Bernadett Szabo / REUTERS

The family says some fighting has spread to their siblings’ home in Western Ukraine in Khmelnytskyi.

“We talked to the older sisters in Ukraine via video chat on Friday. They are hiding in their basements with their children. The husbands are conscripted to military duty and everyone is scared out of their minds,” the girls’ mother, Dr. Susan Fielkow, told the Newshour. “There seems to be nothing we can do to help them right now. Arnie and I were trying to get them to go to the Slovakian border because we’re planning to fly to Europe to meet them, but they cannot even leave their homes. There is bombing everywhere.”

WATCH: What Russia is hoping to achieve in Ukraine

The family also worries about a looming refugee crisis. Neighboring countries are preparing for the possibility that the war will send Ukrainians flooding their way. Pentagon officials estimate that a nationwide attack on Ukraine by Russian troops could result in 1 to 5 million refugees.

”I think the connection to their sisters has really brought it home in a human way,” Fielkow said. “Will it be over in a day or is this going to be weeks and months? What is the ultimate aim of the Russians? We’re watching like everyone else and not sure what the endgame will be.”

The New Orleans Russian Community Center released a statement saying, “We’re deeply shaken and saddened by the Russian invasion into Ukraine. None of the civilian population wants this war. Our people, Ukrainians and Russians have always been closely connected with each other. Almost every Russian has friends or relatives in Ukraine. This is a big tragedy. We hope and pray that this aggression stops soon and the Ukrainian population returns to their safe state.”

Sanctions and the economic toll

Beyond the intense human suffering, New Orleans and Louisiana have a very real economic stake in the outcome. The fallout from economic sanctions could impact a state that relies heavily on oil and energy from the region. According to the Consul, in Louisiana, Russia exports $2.6 billion in goods and imports the same amount, making Russia the largest importer of goods in the state. The vast majority of imports from Russia are oil and gas.

Likewise, the Consul predicts the conflict and sanctions will impact its ability to help companies in Ukraine do business in Louisiana and vice versa. Hayes said Louisiana imported $28.5 million in goods from Ukraine in 2018, making Louisiana Ukraine’s 10th largest trading partner in the U.S. that year.

“We need to take serious action to make the Russian economy and the leadership feel some significant pain. Some of the actions will cause pain in the United States. It could hurt local refineries and other businesses; we have to be willing to accept certain sacrifices to protect and promote democracy,” Hayes said. 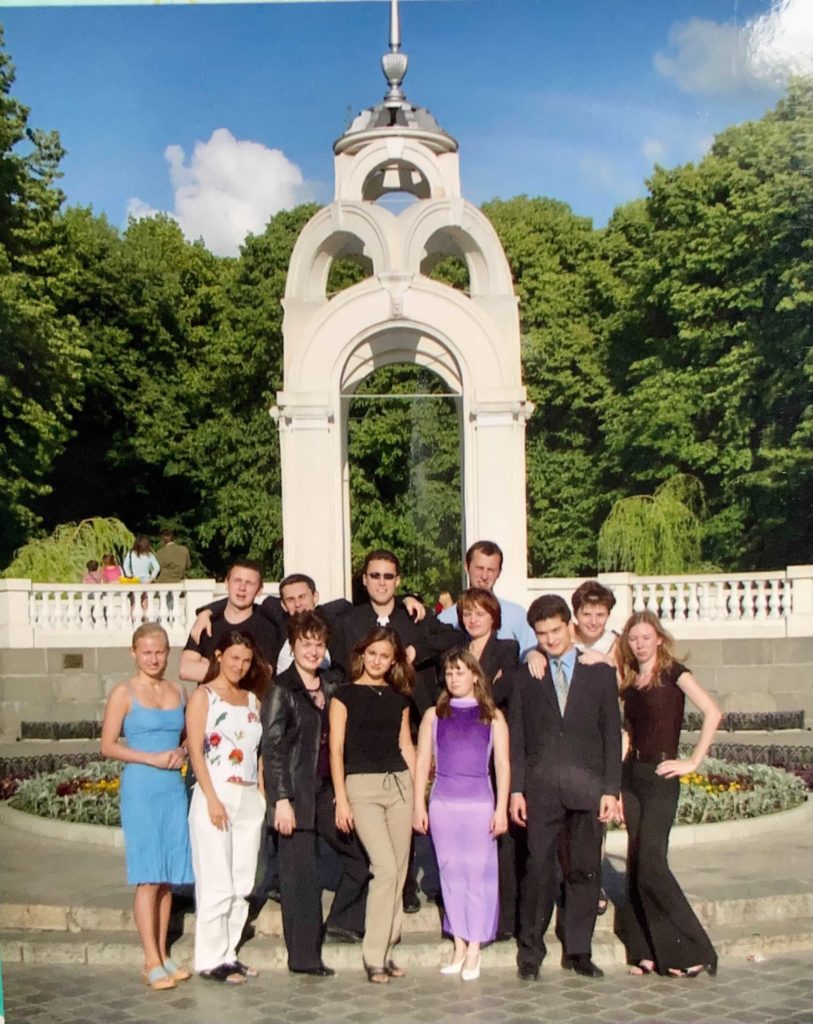 Leo Krasnozhon, an economics professor at Loyola University New Orleans is seen here (first row, 2nd from right) in his college days with friends at Kharkiv University. Krasnozhon says his friends have fled to subway stations which are being used as bomb shelters. Photo by Leo Krasnozhon

Leo Krasnozhon grew up in Kharkiv, a Ukrainian town 60 miles from the Russian border, and moved to New Orleans in 2003. On Thursday, he awoke to the news that his hometown was under attack and Russian tanks had reached the area, putting childhood friends and college classmates in harm’s way.

“It is very difficult to reach anyone. Everyone is just trying to stay hidden and safe,” Krasnozhon said. “They feel trapped because the situation is out of control. You have a dictator invading a democracy and it feels like we are just going back in time. Unfortunately, it reminds us of the beginning of WWII when dictators attacked democracy.”

Krasnozhon, an economics professor at Loyola University in New Orleans, wonders if the world waited too long and relied too heavily on weak sanctions. He worries that the world order is shifting and generations of work following WWII have been upended. “I’m an economist and I can only say that the economic sanctions failed to work. They didn’t stop the invasion. Now democracies need to stick together to stop it quickly,” Krasnozhon said.

“My friends are stuck. Ukraine is surrounded and some of my friends are staying in Ukraine because they don’t have the ability to leave and everyone believed until the last moment that Russia would not start the war. They feel like they are on their own in an unfair situation.” 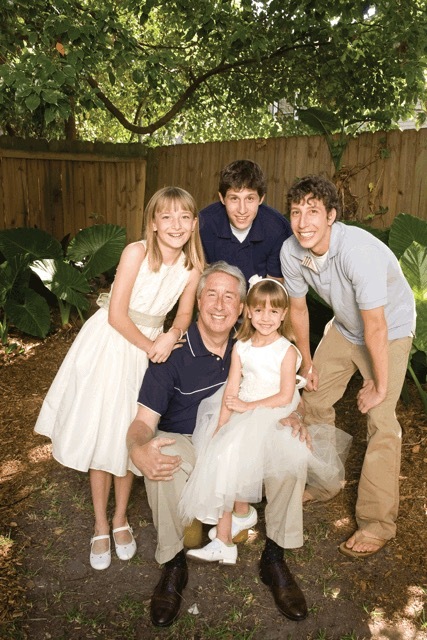 The Fielkow daughters pose with their father and two brothers at their home in New Orleans. Photo by Fielkow family.

For now, many who have ties to Ukraine, like the Fielkows, watch and worry about friends and family while wondering if a peaceful solution is now far from reach.“We are sitting here watching it all unfold on social media and television while it seems like so little is being done to punish Putin and the Russian Federation. I’m hoping that will change,” Fielkow said. “I find it very difficult to believe that the rest of the world is standing by today and watching while the Ukrainian people in multiple cities are being attacked by the Russians. It’s unfathomable and very distressing.”

Left: Yana Fielkow (L) talks with her older sister, Natalia, who calls from Ukraine to speak with her siblings. Sveta Fielkow (r) joins the video conference. They recently reconnected with each other and were reunited after 15 years. Arnie Fielkow is in the background. Screenshot provided by Fielkow family

What Russia is hoping to achieve in Ukraine