New York City’s streets underwent a radical transformation under the leadership of Janette Sadik-Khan, who served as transportation commissioner from 2007 to 2013. In the new book “Streetfight: A Handbook for an Urban Revolution,” Sadik-Khan and co-author Seth Solomonow share the lessons from six years of redesigning the streets of New York City with more plazas, bike lanes and rapid bus lanes.

One of the city’s biggest undertakings: re-purposing a section of historic Broadway in midtown Manhattan in 2009. One of the oldest streets in the city, Broadway cuts diagonally through the street grid system, creating irregular intersections and triangular spaces. To help ease traffic congestion and improve safety, the city completely redesigned 2.3 miles of Broadway from 14th Street to 59th Street, creating 65,000 square feet of pedestrian plazas. The project created areas for people to walk or even sit down for lunch in heavily-trafficked areas along Broadway, including Times Square, Madison Square and Herald Square. In all, the Department of Transportation installed 60 plazas across the city.

In a 2010 evaluation of the midtown project, the Department of Transportation found that it improved traffic times, with an overall seven percent increase in taxi speeds. The volume of pedestrians in Times Square increased by 11 percent and in Herald Square by six percent. The most dramatic improvements occurred in a reduction of car-related injuries in the area, with 63 percent fewer injuries for car riders and 35 percent fewer injuries for pedestrians.

Sadik-Khan now partners with cities around the world to improve their public streets as the principal of transportation for Bloomberg Associates, former NYC mayor Michael Bloomberg’s consulting service. For more on her work, watch tonight’s PBS NewsHour. 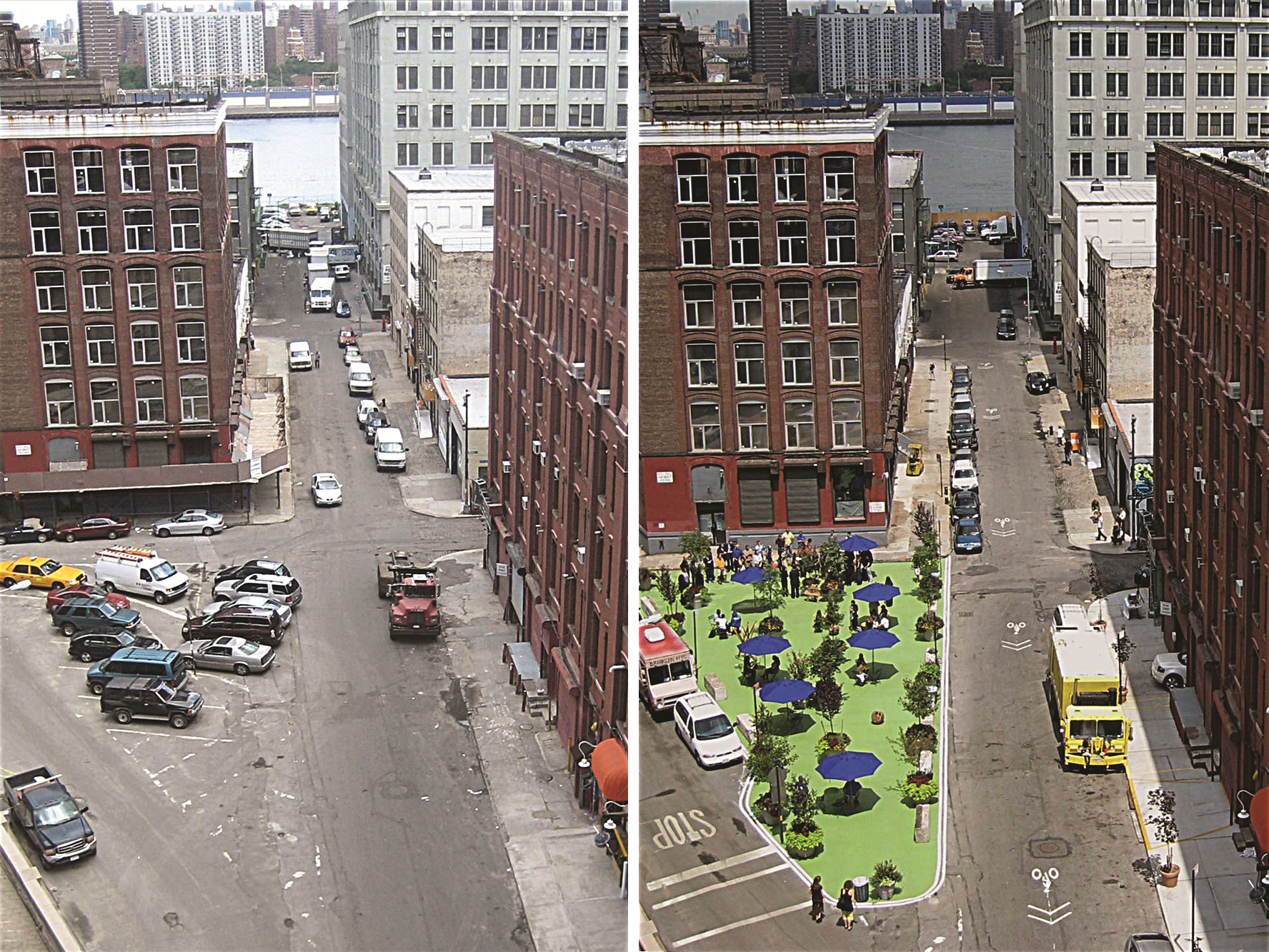 The first plaza to be developed in New York City under Sadik-Khan’s tenure was Pearl Street Triangle, a small parking lot in the DUMBO neighborhood of Brooklyn. In 2007, the Department of Transportation converted the space into a public plaza with full funding and support from DUMBO Improvement District, the local business association. In 2012, the group commissioned Brooklyn artist David Ellis to paint a mural for the plaza. 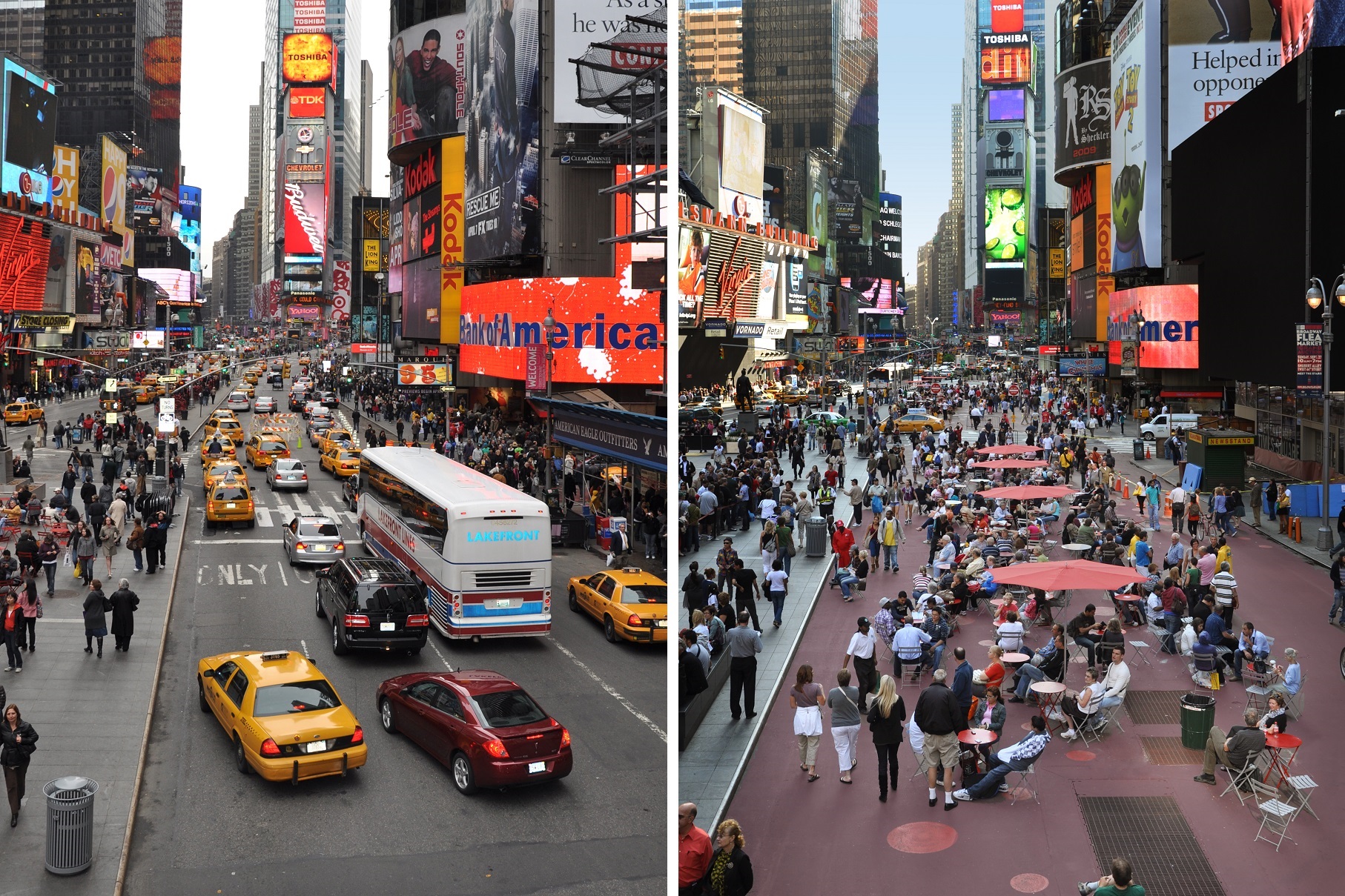 In 2009, New York City planners closed a section of Broadway in Times Square to cars and converted it into a pedestrian plaza. In New York, “We saw retail sales soar along the corridors where we put bus lanes and bike lanes and pedestrian plazas,” Sadik-Khan told NPR station KCRW. In 2011, the area made it on Crain’s list of top 10 retail locations in the world. 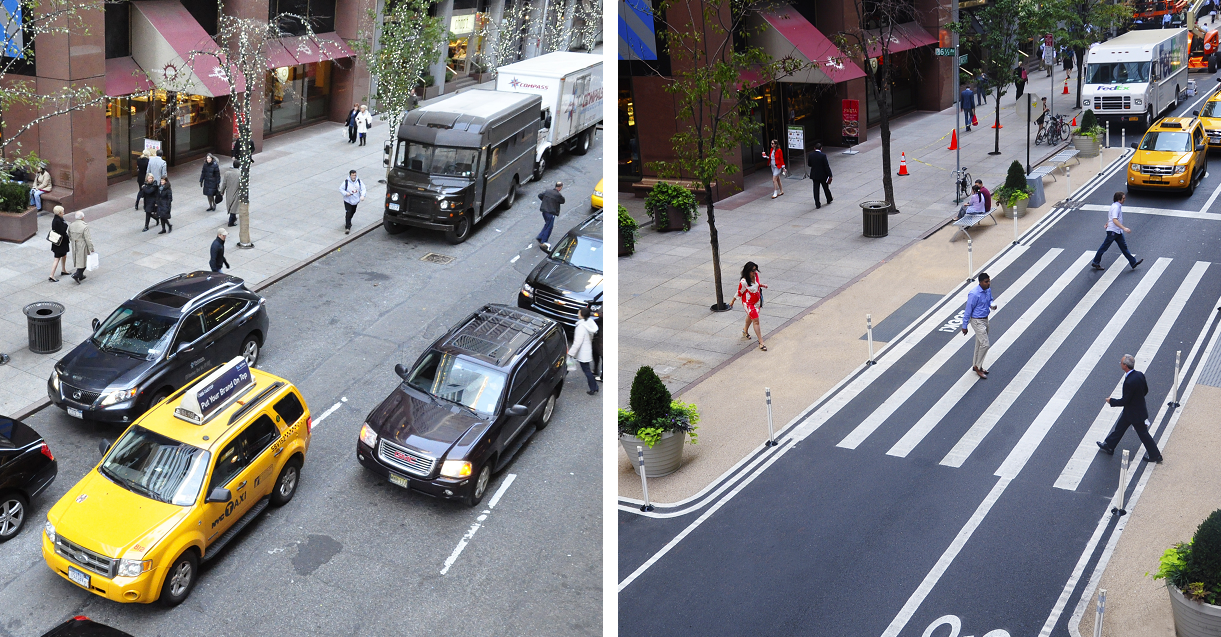 At this new crossing named “6 ½ Avenue,” office workers and passerby can enjoy a pedestrian arcade. Photo by Julio Palleiro/NYC DOT

On 51st Street between 6th and 7th Avenue, the NYC Department of Transportation installed a new street sign marking 6 ½ Avenue (in the spirit of Harry Potter’s famed Platform 9¾). The area allows people to walk through a pedestrian arcade that runs from 51st to 57th street. 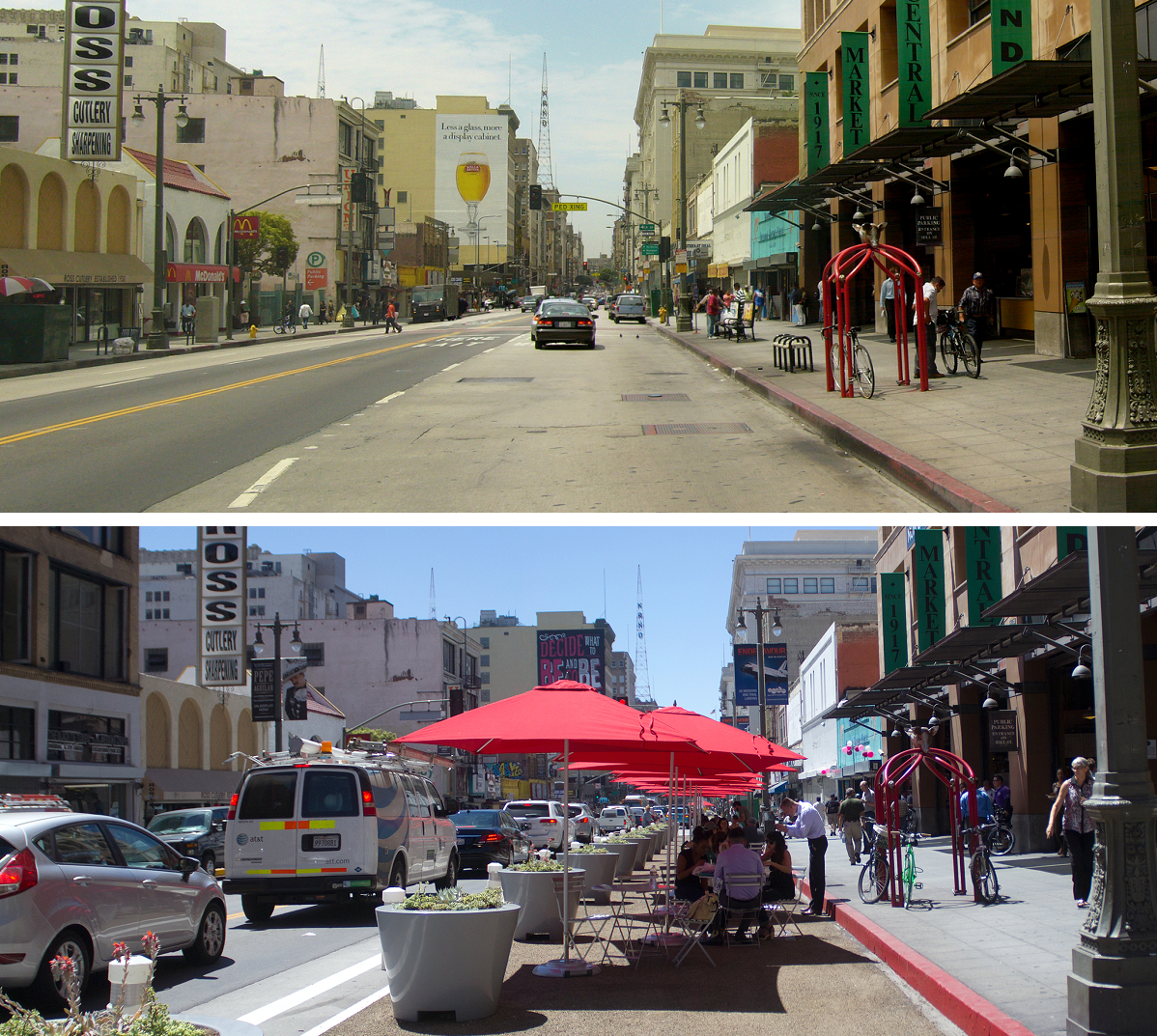 This section of Broadway in Los Angeles became a location for outdoor seating. Photos by Melani V. Smith-Meléndrez

On Broadway, one of Los Angeles’ biggest thoroughfares, city planners in partnership with Sadik-Khan and Bloomberg Associates converted this lane of traffic into an outdoor seating space. 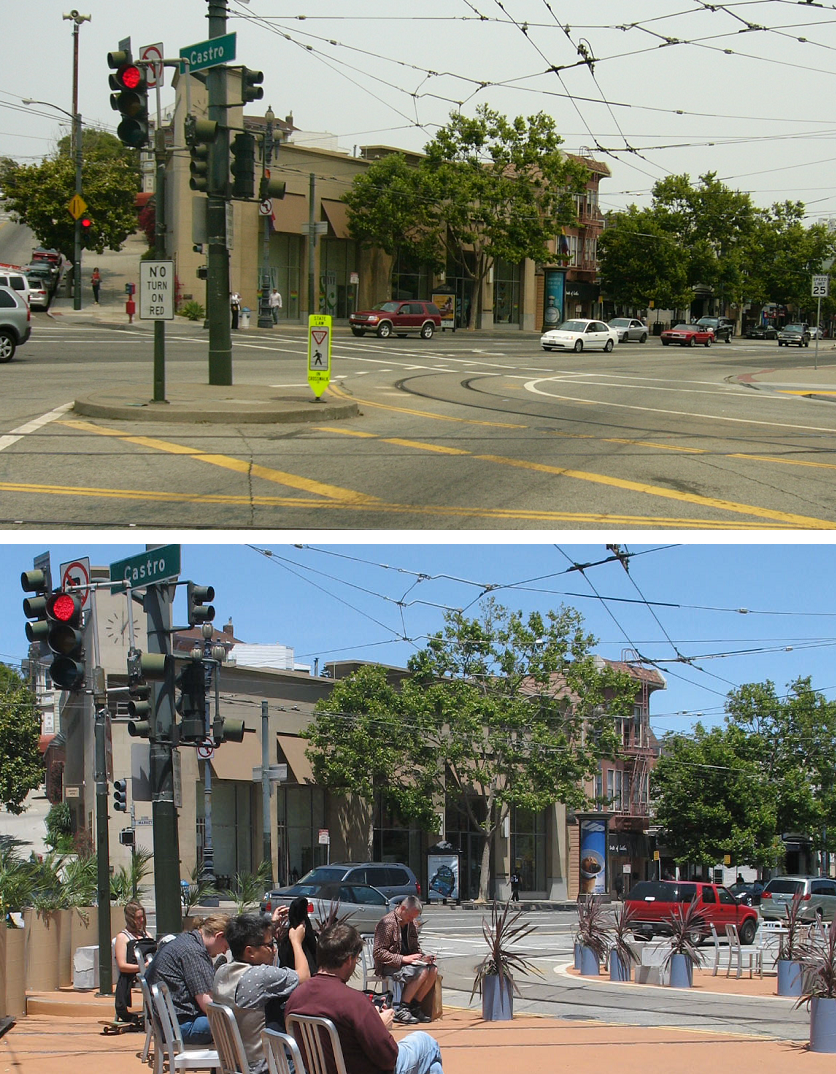 At 17th and Castro St., San Francisco city planners converted this irregular intersection into Jane Warner Plaza, making it one of the most popular meeting spots in the city. The project was the first in the city’s Pavement to Parks project. Since 2009, the project has introduced seven plazas and twelve parklets, which consist of extensions to a pedestrian sidewalk along a short strip of land.