MINNEAPOLIS — America’s cities boarded up windows, swept up glass and covered graffiti Sunday as the country’s most significant night of protests in a half-century promised to spill into another day of unrest fueled by killings of black people at the hands of police.

The turbulence sparked by the death of George Floyd — a black man who died after being pinned under the knee of a white Minneapolis police officer — shook not only the streets of New York and Los Angeles, but dozens of smaller communities such as Fargo, North Dakota, and Lincoln, Nebraska. The damage extended even to buildings near the White House.

Peaceful protests involving tens of thousands of people on Saturday gave way, in some places, to rioting, looting and violence, with police vehicles torched, stores emptied and objects hurled at officers. The police response varied from restrained to aggressive, with officers at times firing tear gas and rubber bullets.

Police and peaceful protesters alike pleaded for a stop to violence, saying it only hindered calls for justice and reform.

“It only hurts the cause,” said Danielle Outlaw, head of the police force in Philadelphia, where more than 200 people were arrested as fires and looting engulfed Center City.

Disgust over generations of racism in a country founded by slaveholders combined with a string of recent high-profile killings to stoke the anger. Three months before Floyd’s death, Ahmaud Arbery was fatally shot as he jogged through a Georgia neighborhood. A white father and son are charged in the slaying. The month after Arbery was killed, an EMT named Breonna Taylor was shot eight times by Louisville, Kentucky, narcotics detectives who knocked down her front door. No drugs were found in her home. 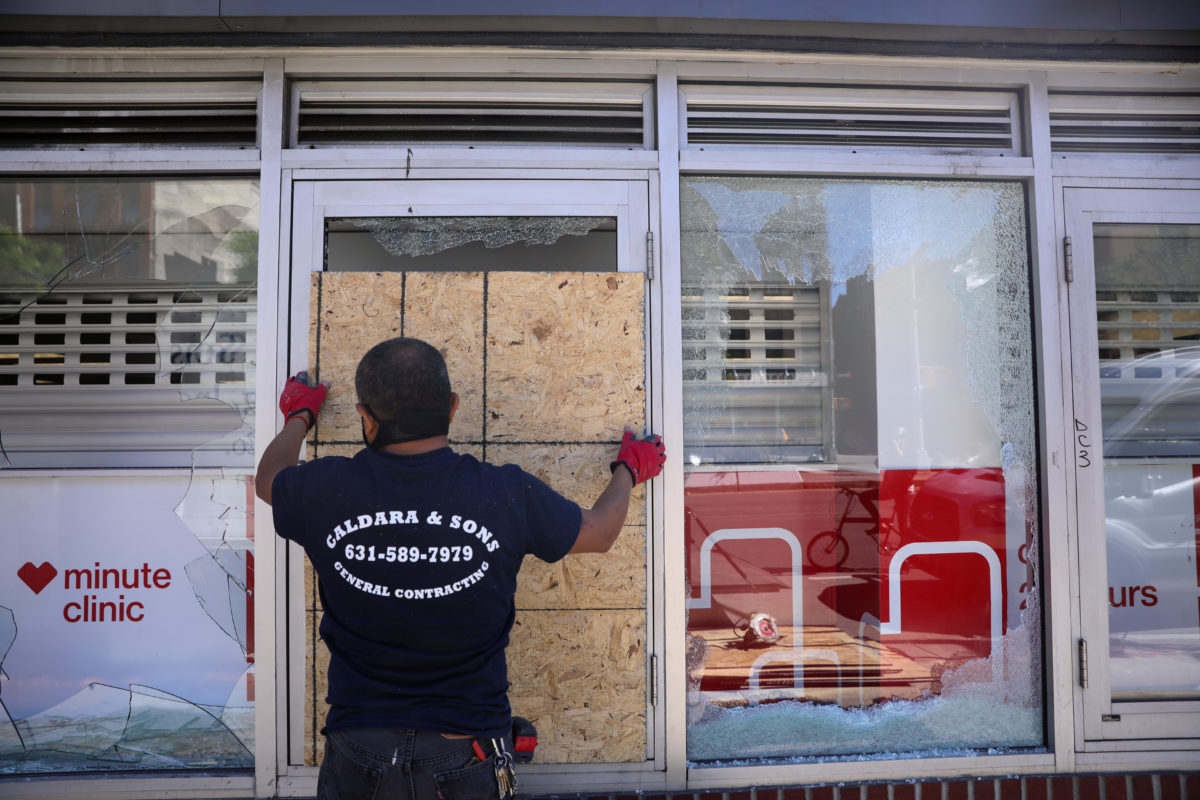 Plywood is placed over broken windows of a CVS store during nationwide unrest following the death in Minneapolis police custody of George Floyd in Manhattan, New York, U.S., May 31, 2020. REUTERS/Caitlin Ochs – RC2UZG9NG79E

Adding to that was angst from months of lockdowns brought on by the coronavirus pandemic, which has disproportionately hurt communities of color, not only in terms of infections but in job losses and economic stress.

The droves of people congregating in chanting demonstrations threatened to trigger new outbreaks, a fact overshadowed by the boiling tensions.

“We’re sick of it. The cops are out of control,” protester Olga Hall said in Washington, D.C. “They’re wild. There’s just been too many dead boys.”

The scale of the protests, sweeping from coast to coast and unfolding on a single night, rivaled the historic demonstrations of the civil rights and Vietnam War eras.

Curfews were imposed in places around the U.S., including Atlanta, Denver, Los Angeles, Minneapolis, San Francisco and Seattle. About 5,000 National Guard soldiers and airmen were activated in 15 states and Washington, D.C.

In Minneapolis, the city where the protests began, police, state troopers and National Guard members moved in soon after an 8 p.m. curfew took effect Saturday to break up demonstrations. The show of force came after three days in which police largely avoided engaging protesters, and after the state poured more than 4,000 National Guard troops into Minneapolis. Authorities said that number would soon rise to nearly 11,000.

President Donald Trump appeared to cheer on the tougher tactics, commending the National Guard deployment in Minneapolis and declaring “No games!” He said police in New York City “must be allowed to do their job!”

Presumptive Democratic presidential nominee Joe Biden condemned the violence as he continued to express common cause with those demonstrating after Floyd’s death.

“The act of protesting should never be allowed to overshadow the reason we protest,” Biden said in a late-night statement.

At the Minneapolis intersection where Floyd was killed, people gathered with brooms and flowers, saying it was important to protect what they called a “sacred space.” The intersection was blocked with the traffic cones while a ring of flowers was laid out.

County Commissioner Angela Conley showed up shortly after the curfew lifted, saying that police had trampled flowers and photos of Floyd. “The community needs healing, and what happened last night only exacerbated the pain that’s been felt,” she said of police action.

Conley said the demonstrations and confrontations with police would continue until the other three officers who were at the scene when Floyd was pinned down are arrested and prosecuted. The officer who put his knee on Floyd’s neck, Derek Chauvin, was charged last week with murder. All four officers have been fired.

“We’ll continue to have this militarized presence in our community until justice is done,” Conley said.

Few parts of America were untouched, from protesters setting fires inside Reno’s city hall, to police launching tear gas at rock-throwing demonstrators in Fargo, North Dakota. In Salt Lake City, demonstrators flipped a police car and lit it on fire. Police said six people were arrested and an officer was injured after being struck in the head with a baseball bat.

By Sunday, the fury had spread to Europe, where thousands gathered in London’s Trafalgar Square, clapping and waving placards despite government rules barring crowds because of the COVID-19 pandemic.

At least 13 police officers were injured in Philadelphia, and at least four police vehicles were set on fire. In New York, a video showed two police cruisers lurching into a crowd of demonstrators who were pushing a barricade against one of them and pelting it with objects. Several people were knocked to the ground. It was unclear if anyone was hurt.

In Indianapolis, two people were reported dead in bursts of downtown violence, adding to deaths reported in Detroit and Minneapolis in recent days.

Sites around the U.S. were defaced with spray-painted messages, from the facade of St. Patrick’s Cathedral in New York to the historic Hay-Adams hotel near the White House. Some of Floyd’s gasped last words — “I can’t breathe” — were repeated around the country, alongside anti-police messages.

On Sunday, maintenance crews near the White House worked to replace windows that had been shattered with large pieces of wood. Buildings for blocks were marked with graffiti, including curses about Trump. Shattered glass still covered the sidewalks. The damaged buildings included the Department of Veterans Affairs, directly across the street from the White House.

Some leaders prepared to put more soldiers in the streets by evening. Georgia Gov. Brian Kemp authorized the deployment of up to 3,000 National Guard troops to Athens, Savannah and any other cities where more demonstrations were planned. Kemp had already approved up to 1,500 Guardsmen to help enforce a 9 p.m. Saturday curfew in Atlanta.

Police have arrested nearly 1,700 people in 22 cities since Thursday, according to a tally by The Associated Press. Nearly a third of those arrests came in Los Angeles, where the governor declared a state of emergency and ordered the National Guard to back up the city’s 10,000 police officers as dozens of fires burned across the city.

This week’s unrest recalled the riots in Los Angeles nearly 30 years ago after the acquittal of the white police officers who beat Rodney King, a black motorist who had led them on a high-speed chase. The protests of Floyd’s killing have gripped many more cities, but the losses have yet to approach the staggering totals Los Angeles saw during five days of rioting in 1992, when more than 60 people died, 2,000-plus were injured and thousands arrested, with property damage topping $1 billion.

Sedensky reported from Philadelphia. Associated Press journalists across the U.S. contributed to this report.

Left: A burned out LAPD police car is seen as people protest against the death in Minneapolis police custody of George Floyd are seen in Los Angeles, California, U.S., May 30, 2020. Photo by Patrick T. Fallon/Reuters.