OKLAHOMA CITY — Survivors and loved ones of the 168 people who were killed in the Oklahoma City bombing won’t be able to gather Sunday on the grounds of the city’s memorial to mark the 25th anniversary of the attack, but that won’t stop them from remembering.

Because the annual remembrance ceremony was canceled due to coronavirus restrictions, those who died will instead be honored with a video tribute that includes the reading of the names of those who died followed by 168 seconds of silence.

U.S. Sen. James Lankford, Oklahoma City Mayor David Holt and Tony award-winning actress and singer Kristin Chenowith, an Oklahoma native, are among those who delivered tributes in the prerecorded video. 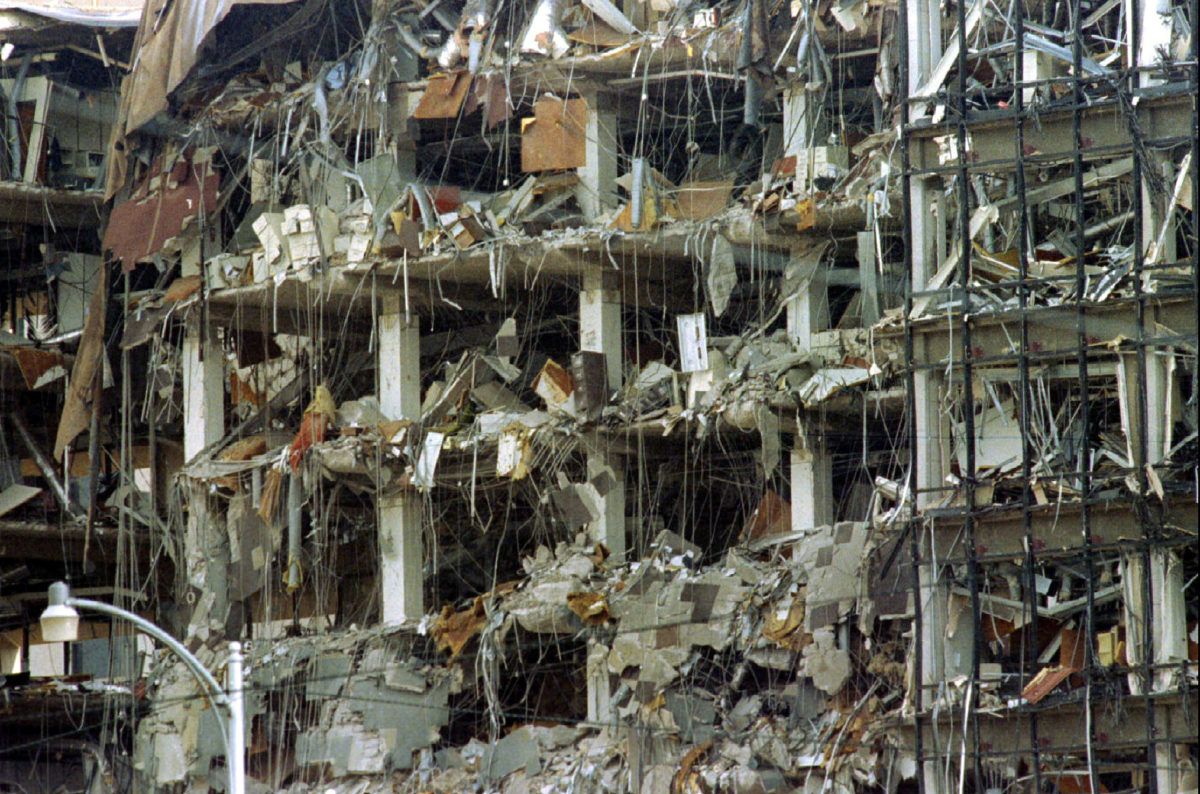 FILE PHOTO: Debris hangs from the front of the federal building after a bomb blew off the north side of the building in downtown Oklahoma City, Oklahoma, U.S. April 19, 1995. Photo by Jeff Mitchell/Reuters

Ordinarily, the city would have gathered Sunday at the site of the former Alfred P. Murrah Federal Building that was destroyed by a truck bomb on April 19, 1995. Gates to the memorial mark time, 9:01 and 9:03 a.m., with a reflection pond between them representing 9:02, the minute the explosion permanently altered many lives and the nation. Stylized, empty metal chairs represent each person who died, and the “Survivor Tree,” a gnarled American elm that withstood the blast, now stands on a small hill and shades the memorial below.

Kari Watkins, the director of the Oklahoma City National Memorial and Museum, said this year’s social distancing restrictions are necessary but unfortunate, as survivors and victims’ family members often only see each this one time each year.

“It’s just a nice time for them to come and be together,” she said. “They’ll miss that, but they’ll have another time when it’s safe to gather and we’ll come back together and do something, whenever that day is.”

Holt said the 25th anniversary of the attack is particularly notable in that it marks a transition of the event from one of personal experience to historical event.

“The march of time is relentless, and every year that passes, fewer and fewer people have a direct connection to it,” Holt said. “The 25th is another time for us here in Oklahoma City to refocus on what makes the event and the site relevant in the decades to come.”

For Holt, that means spreading the message that political violence is never the answer.

“People in Oklahoma City sort of have a special obligation to stand for the idea that we have much more in common than we have different,” he said.

The attack was carried out by two U.S. citizens — former Army soldier Timothy McVeigh and his co-conspirator, Terry Nichols — who hated the federal government. It occurred two years to the day after the federal raid on the Branch Davidian compound near Waco, Texas, that left at least 76 members of the religious sect, including some children, dead.

McVeigh was ultimately convicted, sentenced to death and executed by lethal injection in 2001. Nichols was sentenced to life in prison for his role in what many experts refer to as the deadliest act of domestic terrorism on U.S. soil.

Left: FILE PHOTO: The Field of Empty Chairs is seen during the 20th Remembrance Ceremony, the anniversary ceremony for victims of the 1995 Oklahoma City bombing, at the Oklahoma City National Memorial and Museum in Oklahoma City, Oklahoma April 19, 2015. Photo by Nick Oxford/Reuters file photo.