Volunteers are helping Puerto Rico from home, with a map anyone can edit

That’s the message on a whiteboard at the front of a small room in Columbia University’s Butler Library in New York on a Friday afternoon, as dozens of people settle into desks, open their laptops and begin pulling up satellite images of Puerto Rico.

While island officials continued to call for aid this week amid shortages of food, water and other basic necessities, organizations delivering relief are asking for help with a lesser-known resource: map data. In particular, they need more details on the island’s roads and buildings, in part to give them information about who needs help and how to get there.

More than 1,500 roads and bridges were damaged after the hurricane, and Puerto Rico’s transportation chief noted than rebuilding them could cost $240 million. And while some supplies have arrived at the port in San Juan, there are conflicting reports about how much aid is reaching Puerto Rico’s more-isolated communities, where mapping data can be the most helpful.

The scale of the need is “sort of unprecedented,” said Dale Kunce, who is in Puerto Rico, leading the international information and communication technology and analytics teams at the Red Cross. “We normally don’t have the mappers engaged in this way in the United States.”

Thousands of people are trying to help, while sitting at their computers hundreds of miles away, logging a clear digital path for aid.

About 60 of them gathered at Columbia on Friday, with other universities — including Boston University, Trinity College, Miami University, the University of Miami, Rutgers University and University of Nebraska Omaha — holding simultaneous “mapathons” for Puerto Rico on their own campuses.

Thanks to those in the #Rutgers community who are helping map Puerto Rico at the #hurricane relief editathons in @RULibraries today. pic.twitter.com/OYHxoIfx3U

They used OpenStreetMap, an open-source mapping platform that some members of the American Red Cross and FEMA are using in Puerto Rico because it lets anyone edit maps from all over the world.

The data for OpenStreetMap is collected from surveys, GPS devices, aerial photography, volunteers and other free sources, and it can display maps that show information on crime rates, temperatures, census data and more.

And in the last few years, these platforms have proven to be useful for aid organizations after natural disasters as a place to aggregate public knowledge about areas affected. 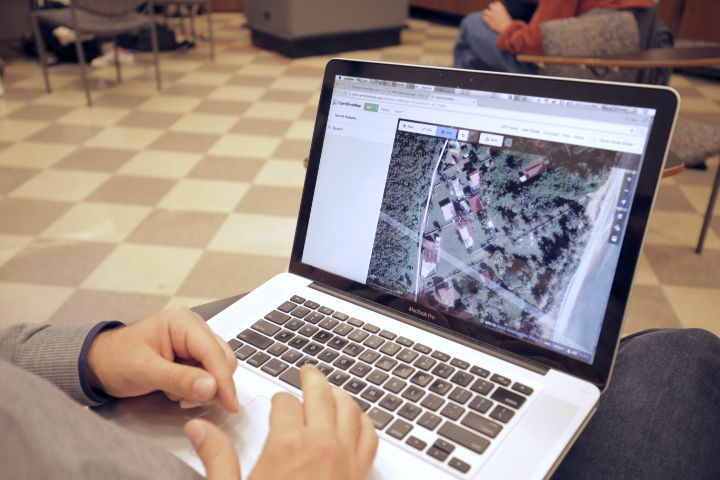 A participant looks at satellite imagery of Puerto Rico to participate in a “mapathon” at Columbia University on Sept. 29, 2017. Photo by Corinne Segal/PBS NewsHour

Kunce said, “Navigation is one of the things we’re seeing the most requests for” from teams on the ground in Puerto Rico.

“This is something that we know can have a direct impact on relief efforts,” said Alex Gil, Digital Scholarship Coordinator at Columbia University Libraries and one of the organizers of Columbia’s mapathon.

Additional map data helps teams “get to the places where they need to be, safely,” Kunce said.

Kunce said he anticipates that completing all the map requests could take several more weeks.

“We’ve been on this huge adoption curve and huge volunteer curve” when it comes to volunteer mapping in recent years, he said. Following recent hurricane damage in the Dominican Republic, Bahamas and Virgin Islands, “All of these areas are getting completely mapped for maybe the first time ever.” 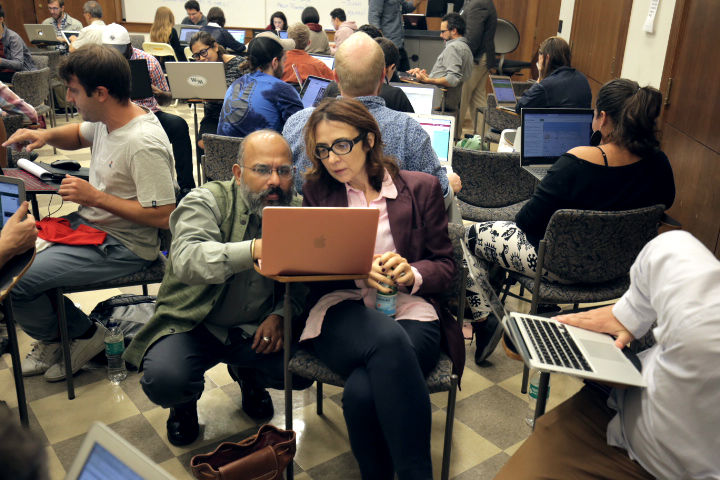 Humanitarian OpenStreetMap Team, a nonprofit based in Washington, D.C., began humanitarian mapping efforts in 2010 after a 7.0-magnitude earthquake devastated Haiti after receiving satellite imagery of the country from the U.S. government. It began filling in areas where buildings, roads and other features did not appear on existing maps.

On many publicly-available online maps, “once you really start to zoom in, a lot of the local-level detail is missing,” Tyler Radford, executive director of Humanitarian OpenStreetMap Team, said. “You won’t have the smaller villages and you won’t have the smaller towns. You won’t see the individual buildings on the street. It’s hard to know how many people live in an area and how many people have been affected by a disaster.”

Those are important details to aid groups who need to know the quickest routes to reach vulnerable communities, or the number of people whom a disaster has affected, he added.

A handful of times a year, Humanitarian OpenStreetMap Team will identify an area in crisis and talk to aid organizations like the Red Cross, who are working on the ground, to determine what kind of data they need, Radford said.

Then, it will put out a call for volunteers.

About 45,000 people since 2010 have contributed to their efforts, including after major earthquakes in Chile in 2010 and Nepal in 2015. This year, between the earthquake in Mexico, Hurricanes Irma and Maria and other events, it has already put out a call for volunteers more than in all of 2016.

“Just like many of the other humanitarian orgs, we’re struggling with how to manage all this at one time,” Radford said.

At Columbia and other universities this week, beginners worked to validate existing data on OpenStreetMap by looking at satellite imagery and confirming that buildings and roads were marked correctly. More-advanced mappers filled out new data. The room was buzzing with clusters of 4 or 5 people, who murmured advice to each other while zooming in and out on a map of northeast Puerto Rico. 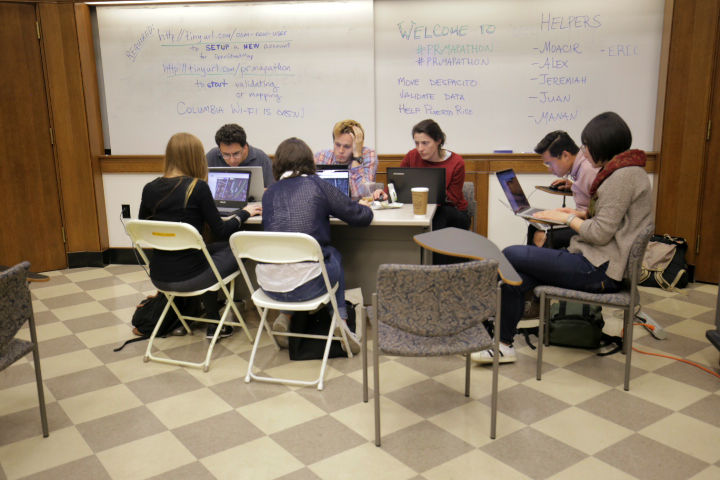 Students sit around a table while they add map data from Puerto Rico to the OpenStreetMap platform at Columbia University on Sept. 29, 2017. Photo by Corinne Segal/PBS NewsHour

Javier Otero Peña, a Ph.D candidate in environmental psychology at the City University of New York (CUNY) Graduate Center, has studied mapping software extensively but “this is the first time I actually get a chance to do something meaningful with this,” he said.

“It feels good to try to help,” Otero Peña, who is from Venezuela, said.

Luisina Silva, who is from Uruguay and a student at the CUNY Graduate Center, said she prefers to contribute time and effort rather than money when “you don’t know where it’s going.” Mapping “only takes a couple of hours … this is very useful,” she said.

Most of the organizers who hosted events at other universities said they had never planned mapping events before, but that it was a valuable opportunity for students to learn more about Puerto Rico and contribute to the response.

Jason Jones, Director of Educational Technology at Trinity College, noted in an email that Puerto Ricans make up 35 percent of the population in Hartford, where Trinity is located.

But whether or not someone has ties to the island, mapping “can help people understand what’s going on in a more visceral way,” he wrote. “It also is a meaningful response at a time that can otherwise feel overwhelming.”

This article has been updated to correct the name of Humanitarian OpenStreetMap Team.

Left: Volunteers worked on the OpenStreetMap platform this week to confirm data on buildings, roads and other information that aid organizations use on the ground. Image courtesy of OpenStreetMap