The double-hulled voyaging canoe Hōkūle‘a returned to Hawaii Saturday after completing a three-year sailing journey across the world.

Guided by the elements, Hōkūle‘a crew members utilized traditional Polynesian navigation methods to traverse about 40,300 nautical miles across 23 countries and territories and more than 150 ports.

“It’s the largest cultural event of our lifetime,” Miki Tomita, director of the Learning Center at the Polynesian Voyaging Society, told the NewsHour Weekend.

Several voyaging canoes from the Hawaiian islands and the Pacific docked at the Magic Island Marina before the arrival of Hōkūle‘a and an official homecoming ceremony.

Crew members descending from Hōkūle‘a received hugs and some were adorned with lei as they walked onto the Hawaiian shore. They formed a circle together with others gathered on the shore for Hawaiian prayers and chants. The subsequent ceremony included a procession and Kāli’i Rite, an indigenous spear-throwing ceremony.

Thousands of people converged at Magic Island, a peninsula in Honolulu, for a day-long celebration of the canoe’s homecoming. Hawaiians have closely followed the voyage of Hōkūle‘a, Hawaii’s first state treasure and a symbol of Hawaiian culture and peace.

On a 19-leg Mālama Honua Worldwide Voyage, the canoe stopped in Brazil, South Africa and Australia, among others. A total of 245 crew members sailed in groups of 12 to 13 people, alternating members at port stops. 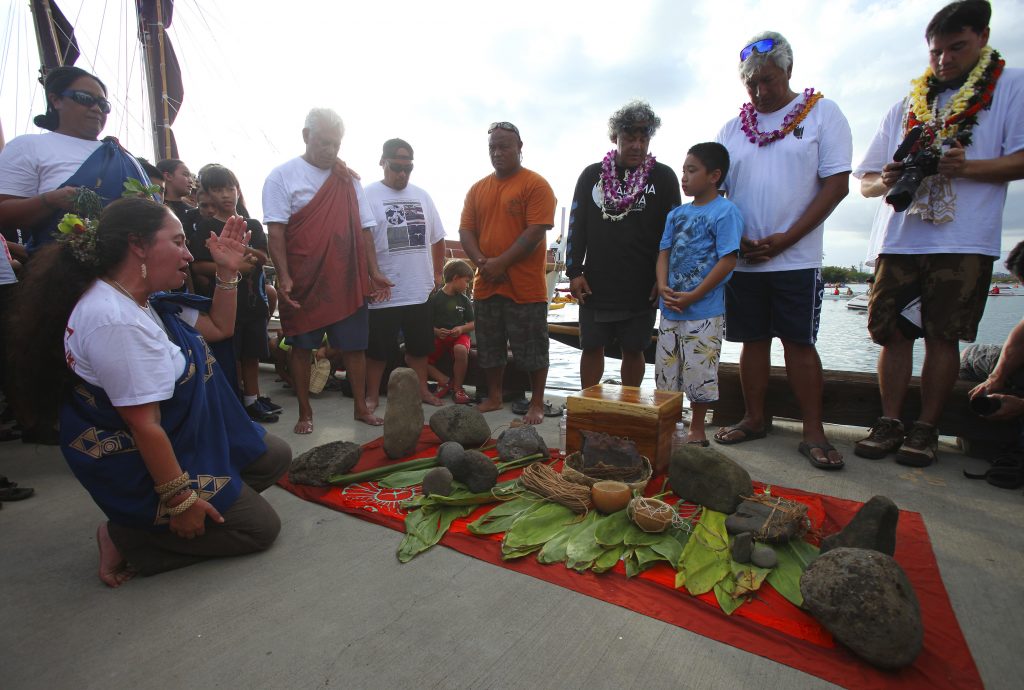 Hawaiian cultural practitioner Pua Case, left, blesses rocks that will be given as cultural gifts before the Hokule’a, a traditional Hawaiian voyaging canoe that navigates primarily by using the stars, departs on a worldwide voyage from Honolulu, Hawaii, on May 17, 2014. Photo by Hugh Gentry/Reuters

With “hope, inspiration, and a sense of renewal,” voyagers aimed to spread their Mālama Honua — the practice of caring for their land, oceans, culture and people — and to learn how people across the world do the same, Tomita said.

Built in honor of canoes that Polynesians first sailed to Hawaii, Hōkūle‘a launched in 1975 as the first voyaging canoe in over 600 years. Tomita said the idea to sail Hōkūle‘a beyond the Pacific arose in 2008, beginning nearly 10 years of preparation and training for the voyage.

The Office of Hawaiian Affairs has encouraged people to greet Hōkūle‘a at Magic Island with traditional Hawaiian songs and chants upon completion of the voyage, according to Hawaii News Now.

“I think that part of the largest hope that was shown to us through the voyage is that everyone is voyaging in their own communities and their own lives to lead toward a better future,” Tomita said. “And we hope to help build and keep that momentum going for generations to come.”

Left: The Hokule'a, a traditional Hawaiian voyaging canoe that navigates primarily by using the stars, departs on a 4-year worldwide voyage from Honolulu, Hawaii, on May 17, 2014. Photo by Hugh Gentry/Reuters

To Gloria Estefan, wearing a mask is as simple as taking care of each other

16 killed, dozens hurt after plane skids off runway in India

WATCH: Pelosi, Schumer on the latest on virus aid negotiations

Postal Service loses $2.2B in 3 months as virus woes persist

WATCH: NYC Mayor de Blasio ‘it will not be easy,’ as some students return to school in-person for start of school year