What happens when migrants die in the Arizona desert?

TUCSON, Ariz. — Jennifer Vollner leaned over a small collection of human bones spread out on a metal table in her office, looking for clues. The bones belonged to an unidentified migrant who had died in the desert in Pima County, Arizona, after crossing illegally into the United States from Mexico.

The fragments recovered from the corpse gave Vollner, one of the county’s forensic anthropologists, little to work with: A left femur, a part of the right leg, portions of the lower vertebrae, and a skull. The only object that had been found with the corpse was a single Nike sneaker, gray and covered in dirt.

Carefully, Vollner, who wore a white coat and glasses, placed the sneaker between the two leg fragments on the table. The shoe, positioned that way, gave the remains some sense of person. It was a silent reminder that the hard, dust-colored bones had belonged to an individual; a person who once made small daily decisions about what to wear and what to eat, and who, at some point in the not-too-distant past, had made a much bigger, more consequential decision — to attempt a dangerous desert trek across the border and into the U.S.

Using her bare hands, Vollner picked up the femur and reexamined the bone, taking a closer look at a section with a small, neat incision. Vollner had cut into it earlier, in the process of conducting more tests. In these types of cases, Vollner said as she worked, the odds of identifying the remains are always slim.

“Unfortunately with these individuals, when they’ve been exposed to the desert and that environment for a really long time, we lose information,” she said. But that doesn’t mean people shouldn’t try, she added.

‘These people had families, had friends, had a name that they were given at birth. That’s something that we hope to restore to them in death.’

“These people had families, had friends, had a name that they were given at birth,” Vollner said. “That’s something that we hope to restore to them in death.”

Vollner, an expert on skeletal biology, has spent her career analyzing the remains of people who died under unforeseen circumstances. Vollner creates a profile of the person, determining if they were male or female, their age and height, some insight into their ancestry.

Yet these days, most of the bones Vollner examines spark more questions than answers. Many belong to unidentified migrants who died in the desert, often nameless and without identification. Most of the bones that pass through Vollner’s hands were recovered well after the person’s death.

As federal and state officials deal with the aftermath of the Trump administration’s policy of separating families at the border, and as another caravan of migrants heads toward the U.S. border, many are asking: What happens when migrants come to the U.S.? For those in communities along the border, like Vollner, the question is: What happens when they die along the way? 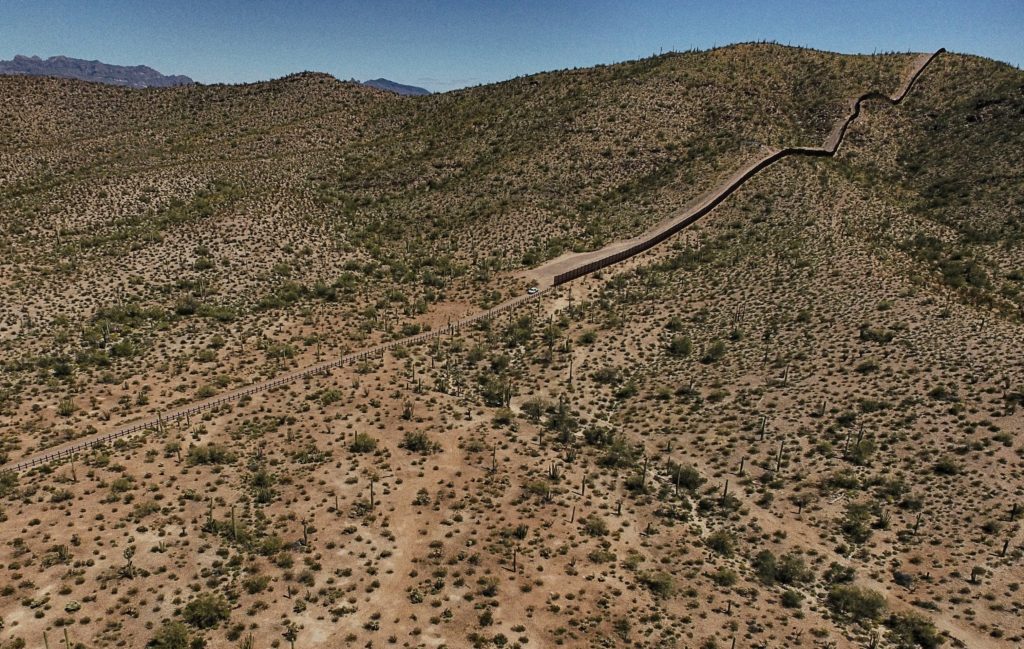 Hundreds of thousands of migrants are caught each year illegally entering the Southwestern U.S. Finding and identifying the remains of migrants who die along the way is a challenge for federal, state and local law enforcement agencies. (PEDRO PARDO/AFP/Getty Images)

‘The smell of it haunts you’

The states that share a border with Mexico — Texas, Arizona, California and New Mexico — see a stream of migrants who enter the country through the desert. Since the 1980s, hundreds of thousands of migrants each year have been caught illegally crossing the Southwestern United States, according to Border Patrol data, though the number has dropped in recent years. In 2017, Border Patrol apprehended 303,916 migrants crossing the Southwest border illegally, down from over 1 million as recently as 2006.

It’s unclear how many people die in the process, or exactly how many of their bodies are found by law enforcement agencies and individuals. But in Pima County alone, officials have 2,816 recovered remains — defined as both skeletal and fully fleshed bodies of undocumented migrants — since 2000, according to a 2017 report by the county medical examiner’s office. Last year, the country recovered 128 remains. In an interview, Greg Hess, the chief medical examiner for Pima County, told the PBS NewsHour that 113 remains have been found so far this year.

About 65 percent of the remains are later identified, Hess said. And the medical examiner’s office expects to increase its rate of identifications through continued cooperation with immigration enforcement agencies and other organizations, he added.

But 992 migrants who have died in the county in the past two decades remain unidentified, according to data from Hess’ office. Most bodies are recovered in the summer months, when migrants are more likely to travel throughout the desert. In 2017, for example, there were 20 recoveries in June, compared to four recoveries in December.

Border Patrol agents find about half of the bodies discovered in the county, Hess said. The others are discovered by local residents and ranchers like John Ladd, 63, who manages a roughly 40-square-mile cattle ranch a little more than a mile away from the U.S.-Mexico border. Ladd said he’s found 14 bodies of migrants on his ranch in the past 30 years.

“I’ve become a little more hardened to it,” Ladd said in an interview. “But it’s still an experience you don’t want to go through because it’s a dead body. It’s a human.” 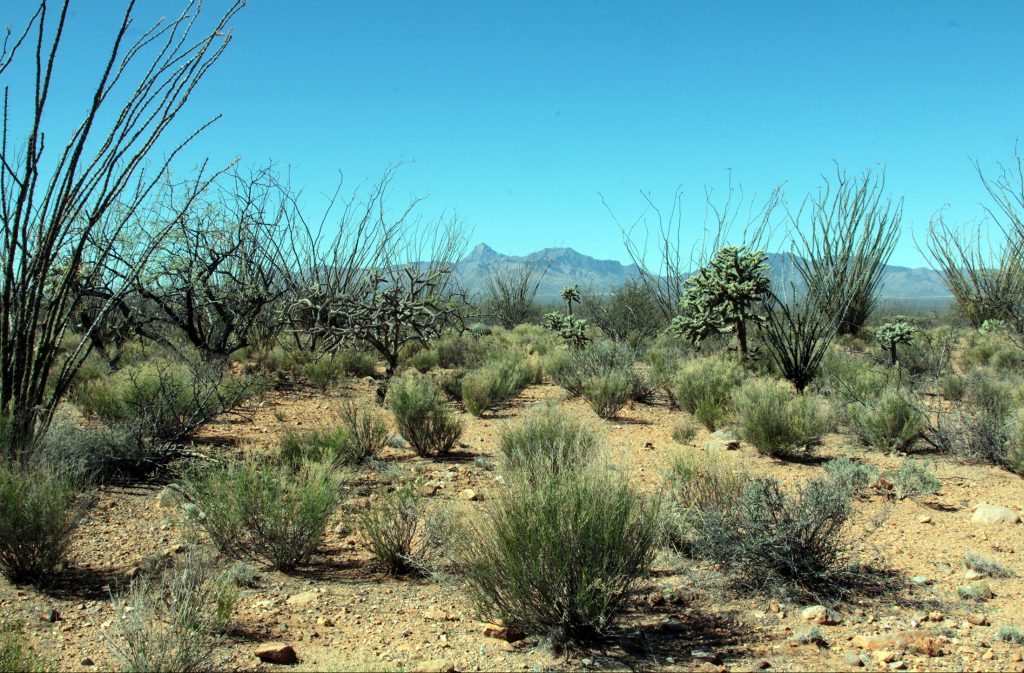 Nearly 1,000 migrants who have died in Pima County, Arizona, in the past two decades remain unidentified. File photo by Joshua Barajas/PBS NewsHour

Ladd remembers the details from most of the bodies he’s found. He recalled finding the body of one man in the winter who appeared to have died from hypothermia; the man was wearing only a t-shirt and a pair of Levi jeans.

“It’s a shocking event. Even the smell of it haunts you,” Ladd said. “One of the worst experiences is when the coroner got there and slid them into the body bag.” He added, “I’m a pretty tough guy but that’s a pretty big deal. It sticks with you.”

The speed with which migrants are identified varies. In an interview, Jacob Stukenberg, a Border Patrol agent and community liaison for the agency, said if agents come across the remains of a migrant while doing rounds in the field, they report it to local law enforcement agencies first.

After local law enforcement officials conduct a brief investigation of the area, the medical examiner receives the remains and starts an investigation to determine the person’s identity and cause of death. Eventually, the office is able to identify the body, or determines that there isn’t enough information to do so, in which case the person is cremated and their remains are sent to a local cemetery.

Sometimes, clues left behind by a dead migrant can help the medical examiner’s office find the person’s friends or family members. Some migrants carry pieces of papers with phone numbers on them, or cell phones that can be used to call love ones, Hess said.

Sometimes, clues left behind by a dead migrant can help the medical examiner’s office find the person’s friends or family members.

Hess’s medical examiner’s office also works with Mexican, El Salvadoran and Guatemalan consulates to help identify individuals. Every couple of weeks, officials from the office meet with staff from the countries’ local consulates as well as Border Patrol agents to review any remains that were found, Hess said. Officials said the cooperation helps eliminate discrepancies and verify information.

“Missing reports can become vague if they go to other non-law enforcement agencies,” said Border Patrol Agent Daniel Hernandez, another community liaison for the agency. “We have to keep everything documented, [and] we work with the consulate specifically so that we know that information is handled accurately.”

Hess acknowledged that undocumented immigrants might not reach out to Border Patrol or other immigration enforcement agencies with a missing persons report for fear of being detained or deported. For that reason, the county also works with groups like the Colibrí Center, an advocacy organization that seeks to reunite families with missing migrants.

“Law enforcement owns missing persons. If someone in your family goes missing and you haven’t heard from them and you’re worried, who would you call to look for them? The cops,” Hess said. “It’s a broken system for this group of people.” 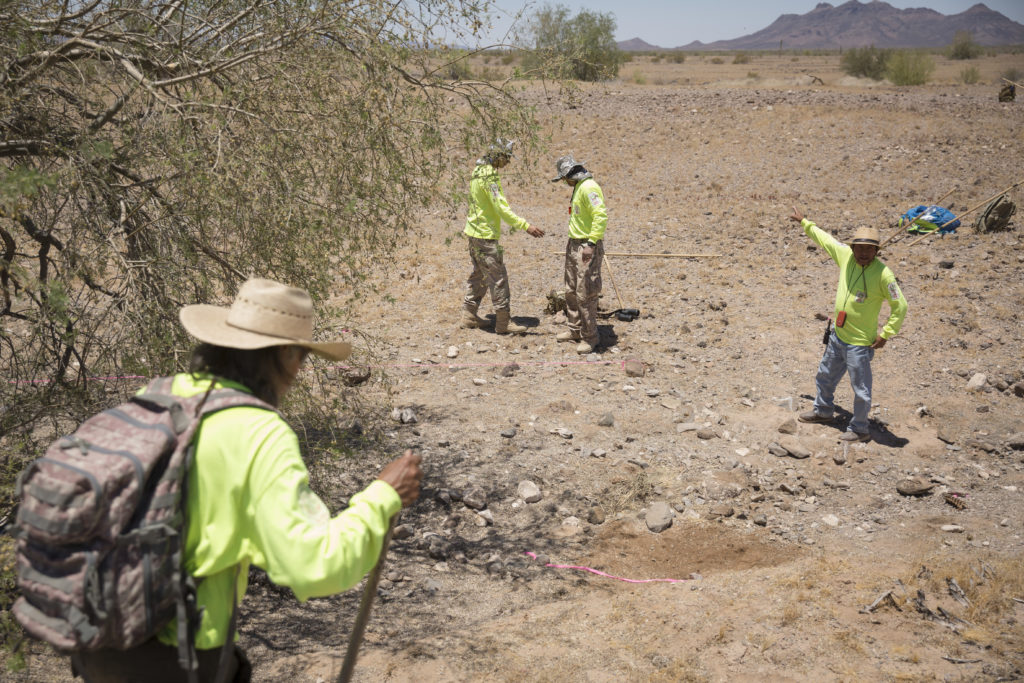 A search and rescue crew from the group Aguílas del Desierto mark off an area where human remains were found last year in the Cabeza Prieta wilderness near Ajo, Arizona. (Photo by Caitlin O’Hara/Getty Images)

In an interview, an immigrant living in the U.S. named Sonia, 45, recounted the terror she felt when she got a call from the coyote she had hired to bring her 14-year-old daughter into the country. The coyote — the name often used for guides who help undocumented migrants cross into the U.S. — let her know that her daughter had been left behind in the Arizona desert.

“He told me they left her behind because she had gotten very sick,” said Sonia, who asked to use only her first name because of her immigration status. “He said to call the consulates and immigration to try to find her.”

But Sonia said she was scared to reach out to officials. Instead, she relied on her sister, who is documented, to interact with authorities and post flyers around Arizona. Immigration officials looked for her daughter, but Sonia said she believes they stopped the search after a couple of days.

“I felt helpless,” Sonia said, recalling the feeling of not knowing where her daughter was. “She had called me on my birthday to tell me she was almost out and wouldn’t be able to contact me for a while. I thought she was coming to me.”

Her daughter’s body was recovered two weeks later by a humanitarian group. She had not yet decomposed, making her easier to identify. She had died of hypothermia. Sonia said that she considered herself one of the lucky ones; at least she found out what happened, and was able to recover the body.

Hernandez, one of the Border Patrol agents who was interviewed for this story, said the agency’s officials in the field do not ask questions about citizenship to individuals looking for a missing friend or relative.

“We don’t care as long as we find that person,” he said.

In the end, the odds of identifying a migrant found dead in the desert depends largely on the condition of the body when it was discovered.The Pima County medical examiner’s office has a formal system to classify the condition levels of corpses, measured on a scale of one to eight.

Level one means the body is “fully fleshed” and just recently recovered, according to the office’s annual report. Level seven is a body that is six-to-eight months post-mortem, a condition where the corpse has reached full skeletonization.

Back at the examiner’s office, as Vollner finished her report on the skeletal remains on her table, she paused to consider a simple question. Given the challenges and uncertainty, why does she keep doing this work?

“I think it’s human nature. You think about when people talk about humankind and the first burials and caring for our dead,” she said. “That’s a very sacred thing, even to those that aren’t necessarily religious or spiritual. That’s what we do as humans.”

Left: In Arizona and other border states, hundreds of migrants die in the desert while crossing into the U.S. Their remains are not always identified, making it hard for families to know what happened. (Photo by Caitlin O'Hara/Getty Images)