What ‘The Wire’ can teach us about storytelling

The iconic television series “The Wire” on HBO broke onto the scene in 2002. Over the next five seasons, the award-winning series would captivate viewers attracted to its raw realism and connection to the shadowy inner-workings of Baltimore’s gangs, media and government.

The show, created by former long-time Baltimore Sun police reporter David Simon, has since become a popular learning tool in colleges classes around the country, cutting across academic disciplines.

Cast members of HBO’s #TheWire participated in an “Actors and Activists” panel on Saturday. Watch our program tomorrow night to see how some professors are integrating The Wire into their classrooms. 📷: @shawncpaik/NewsHour

This week the series was the focus of a two-day conference at Columbia University in New York, where a host of panels from a cross-section of society and academia, and some of the show’s actors, analyzed the critically acclaimed series.

“I don’t feel like I can overstate the kind of collective, communal, collaborative nature of the conference,” said Eileen Gillooly, executive director of Columbia University’s Heyman Center for the Humanities, who organized the event.

Gillooly said the idea for the conference formed several years ago among members from a consortium of academic disciplines in media, philosophy, sociology, literature and anthropology, among others.

“It’s like a great novel, when you see it you want other people to see it too,” she said, in an interview with the PBS NewsHour. “[The show] moves you to want to do something.” 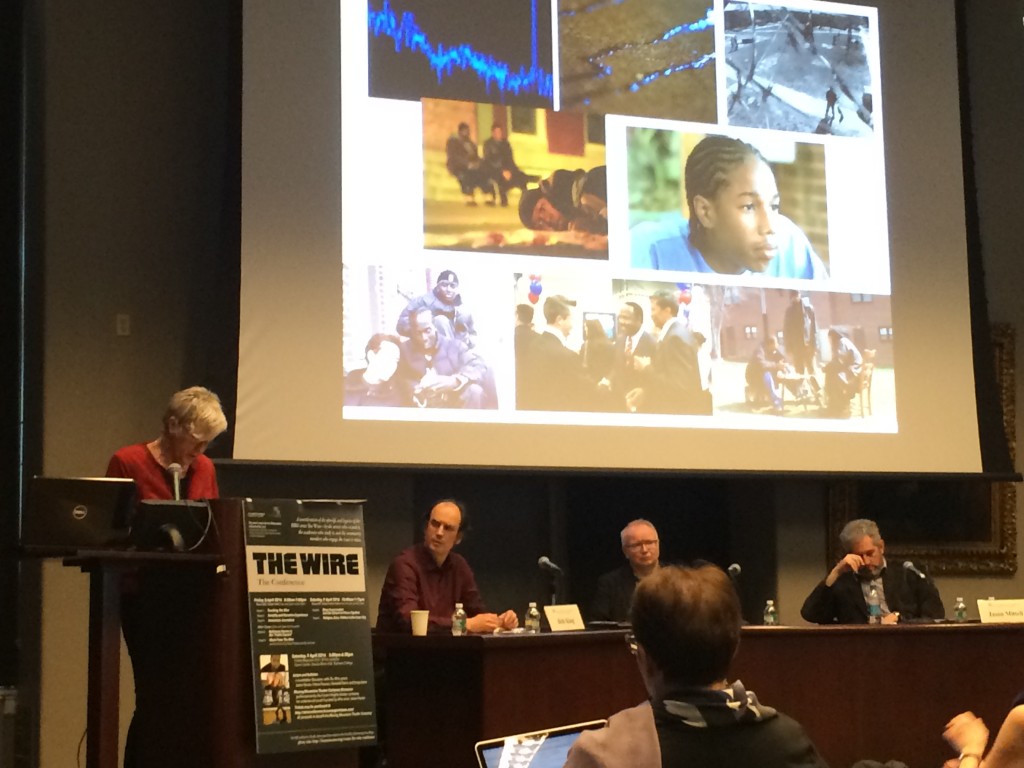 A group of professors from several colleges discuss the “seriality” of HBO’s “The Wire” a critically-acclaimed TV drama based in Baltimore. Photo by Michael D. Regan/PBS NewsHour

On Friday, one panel focused on what “The Wire” can teach us about immersion journalism, a form of reporting that requires a journalist to spend long periods of time with a subject, often under deeply personal circumstances.

Among the panelists was Pulitzer-Prize winning New York Times’ reporter Andrea Elliott, whose five-part series about a family living in a New York housing shelter cast the difficulties of connecting to subjects outside of comfort zones and cultural familiarities.

“As journalists we’re very curious creatures and we like to go into other worlds,” she said. “People who I guess in some way want to get into the heads or our subjects and the only way to do that is to be around them.

“I think I’ve always been drawn to otherness,” she said.

On Saturday, four cast members from the series met for a panel on how the series changed their own lives.

Wendell Pierce, who played Detective Bunk Moreland on the show, said during the panel he will invest $20 million into a Baltimore apartment complex, a portion of which will be offered to local artists at lower rates. Much of the construction work for the building would also serve as a template for a job program he’d like to expand in the city, he said.

Felicia Pearson was raised in Baltimore, where as a teenager she dealt drugs and was convicted of second-degree murder before joining the cast of “The Wire” as the character “Snoop.”

She said the show gave her tools to give back to her city – a common theme among many of the show’s actors, some of whom have started non-profits and conducted advocacy work to combat poverty and address social issues.

“Now that I’m traveling the world, that I’m an actress, I wanna be more involved in my community,” she said, noting a recent plan to hold a back-to-school cookout for Baltimore students. “I will give what I can and I’m gonna make everything right.”