The news that comes out of Washington, D.C., can feel like a spigot sometimes. The PBS NewsHour takes a moment to pause every week to bring you important stories happening beyond the Beltway. Here’s what we’re reading now. 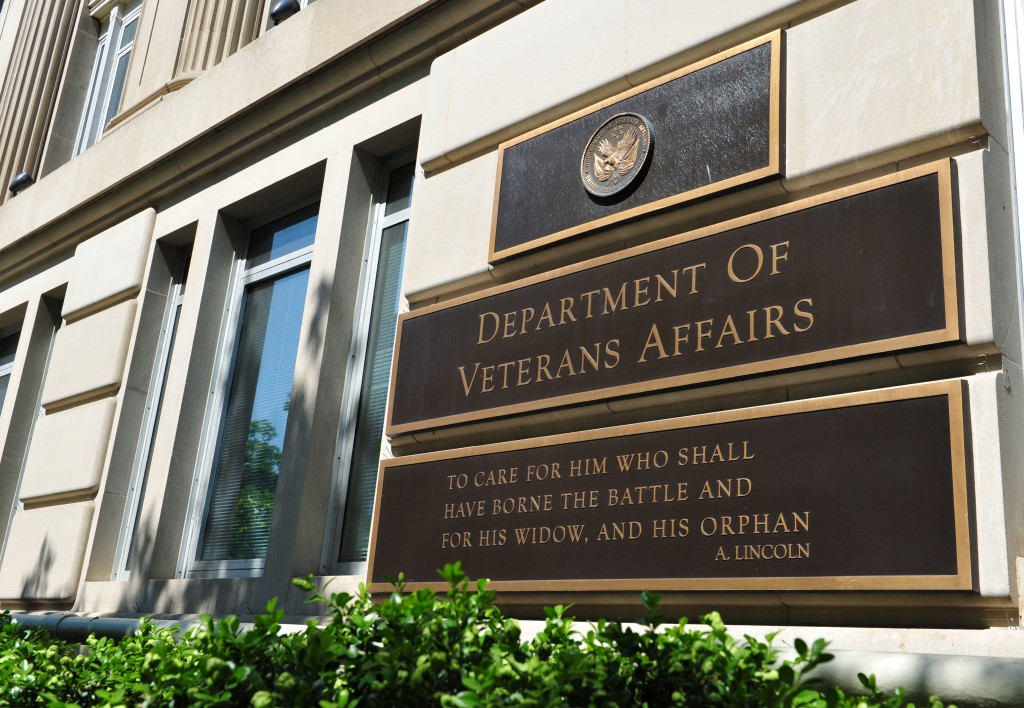 This 2014 photo shows the front of the Veterans Affairs building in Washington, D.C. Photo by Karen Bleier/AFP/Getty Images

Former and current Veterans Affairs employees are accusing VA leaders of retaliating against whistleblowers who try to hold managers accountable and improve matters at the troubled agency.

More than 30 past and present employees told NPR that VA managers have discouraged whistleblowers from speaking out by verbally abusing them, isolating them in “solitary confinement” rooms, and blaming them for worsening work conditions.

Cynthia Chavez, an Army veteran and former VA employee, told the news organization that the VA had systematic work performance issues at some of its hospitals in Alabama. She said employees often showed up late for work, some left early and others didn’t show up at all. One worker, she said, routinely stole food from a VA hospital in Tuskegee and used it to run a catering business on the side.

Chavez, who at the time led the Nutrition and Food Services unit in the Central Alabama Veterans Health Care System, temporarily suspended the employee. Soon after, however, her boss and local union leaders accused her of abusing her authority and creating a hostile work environment. She was eventually forced to retire early, she said.

Chavez is just one of dozens of past and current VA workers who have accused agency power holders of wrongdoing. [NPR]

Why it matters: The accusations are part of a long list of scandals the VA has faced in recent years, chief among them a series of reports in 2014 that found that dozens of veterans died while waiting for appointments at VA hospitals.

The latest claims have raised further questions about the agency’s ability to fix serious systemic issues.

NPR reports that the VA leads all federal agencies in the number of whistleblowers who’ve said they’ve been retaliated against.

“There’s no accountability,” Alan Hyde, a Marine Corps veteran and former employee of the Central Alabama VA, said about the agency. “And it’s gonna be a never-ending cycle here until someone steps in and starts cleaning house from the top and putting people in who care about the veterans.”

Last year, the VA restructured the Office of Accountability and Whistleblower Protection (OAWP), the unit in charge of protecting whistleblowers. But critics told NPR that the office is understaffed, that its investigations drag on, and that it can’t enforce its findings.

“We’ve got a very sick organization,” VA whistleblower Sheila Meuse said. “The important thing (for the VA) is to squelch the whistleblowers to speak. You know, it’s like shoot the messenger because it’s not the message we want to hear.”

2. The mother of Antwon Rose Jr. speaks out. 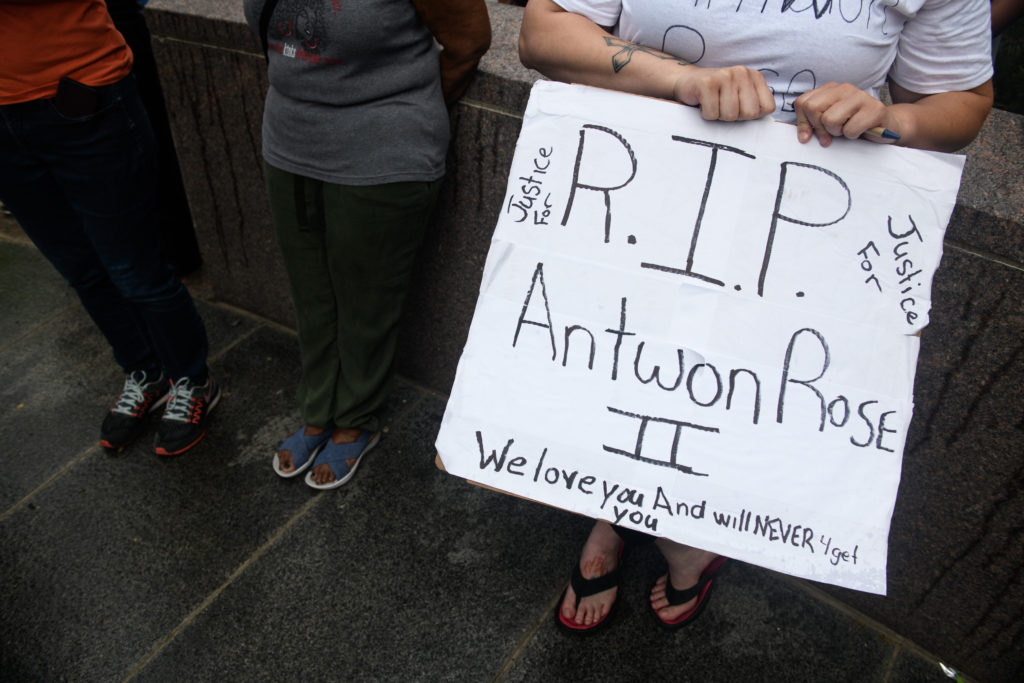 A woman holds a sign remembering Antwon Rose who was killed in a police shooting on Tuesday as she joins people gathered for Juneteenth celebrations on June 23, 2018 in Pittsburgh, Pennsylvania. Photo by Justin Merriman/Getty Images

The funeral for Antwon Rose Jr. was held on Monday after a Pittsburgh-area officer shot and killed the 17-year-old last week as he fled from a car stopped by police.

Protests over the teen’s death were held in the days that followed last week’s deadly encounter, with some wearing homemade “Justice for Antwon” t-shirts. Protests were paused on Monday, out of respect for the family, the Associated Press reported.

Rose was riding in a car that police suspected was connected to an earlier shooting that occurred that day. When the car was pulled over, Rose fled unarmed and a 30-year-old officer shot him three times. Authorities said they found an empty gun clip on the black teen.

East Pittsburgh Mayor Louis Payne said Michael Rosfeld had been sworn in hours before the shooting. Payne also said the officer also had eight years of police experience at other police departments in the county. Rosfeld has been placed on administrative leave.

Police have said the investigation is ongoing. No charges have yet been filed.

Rose’s mother, Michelle Kenney, told ABC News over the weekend that the police killed her son “in cold blood.”

“Every time you turn on the TV, there’s a young African-American male shot by the police,” she said through tears. “And you say, ‘I feel sorry for them.’ But ‘them’ is me. But ‘them’ is him.” [TribLIVE]

Why it matters: Rose’s death is the latest in a series of high-profile police shootings that have prompted demonstrations and calls for accountability over the police’s use of force in these encounters.

A north Minneapolis neighborhood is demanding answers for the shooting death of Thurman J. Blevins, 31, by police officers on Saturday. Authorities said Blevins was armed and that a handgun was recovered at the scene, but some witnesses have disputed the police account, MPR News reported.

Minneapolis Mayor Jacob Frey said later that weekend that the officers involved were wearing body cameras. It’s unclear when the footage from those cameras would be released, if at all, but it’s part of what Minneapolis NAACP called for in its statement on Facebook, adding that the chapter “believes this situation is a great tragedy and our community continues to be traumatized.”

Researchers found that police killings of unarmed black Americans negatively affect the mental health of black adults who were not directly involved in the acts or the families affected by the incidents, in a new population-based study, published last week.

The study shows “that having a reminder of structural racism and its pervasiveness is something that gets under the skin to influence the mental health of black Americans,” Dr. Atheendar S. Venkataramani, one of the study’s lead authors, told the PBS NewsHour. 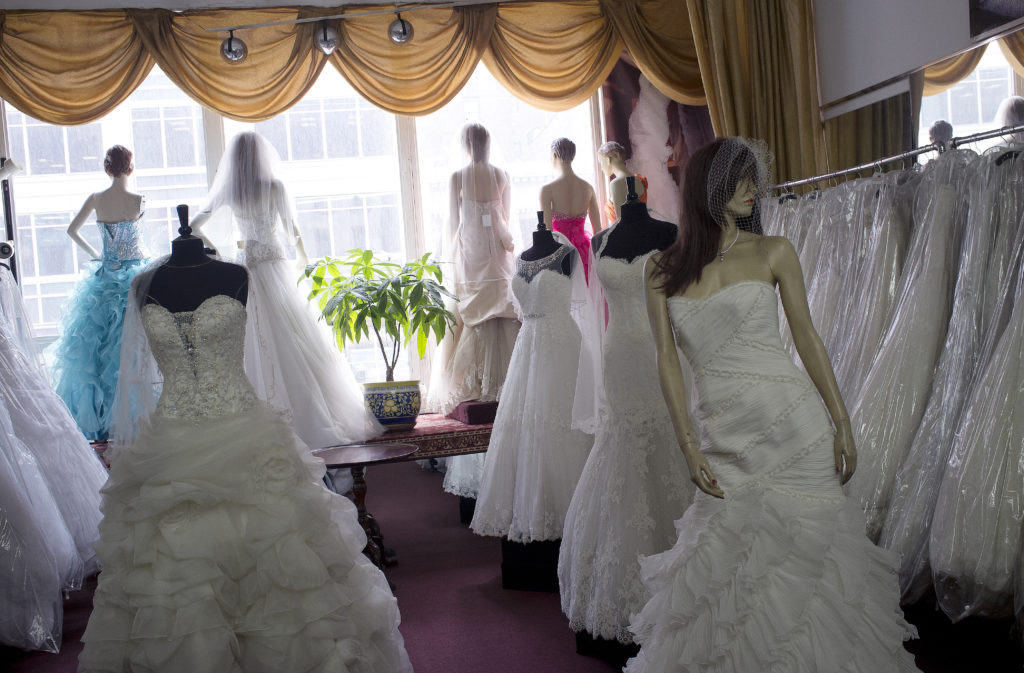 Over the last 20 years, 7,000 underage girls as young as 12 got married in South Carolina.

A recent investigation into state marriage records by the Post and Courier revealed that a majority of the female minors were wedding older men.

A 1962 law does not set a minimum age for marriage between two people as long as the woman is pregnant or has given birth. According to the newspaper, adults can be prosecuted for a felony for having sex with a minor, but they can also marry a pregnant victim if a parent gives their blessing.

The legal age for consent in South Carolina is 18, but a 16- or 17-year-old can marry with parental permission.

A bill proposing a statewide ban on marriage for anyone under the age of 16 did not make it out of committee last fall. [The Post and Courier]

Why this matters: This year, two states have banned marriage for anyone younger than 18 years old in all cases. Delaware became the first state to do so in May. New Jersey followed suit last week. However, marriage for someone under 18 years old is legal in 48 states and the District of Columbia. The federal age of consent is 18 years old, but states allow exemptions if there is parental consent or judge approval. The vast majority of child marriages involve underage girls marrying older men, according to the advocacy group Unchained at Last. Experts decry such marriages as sexual exploitation. 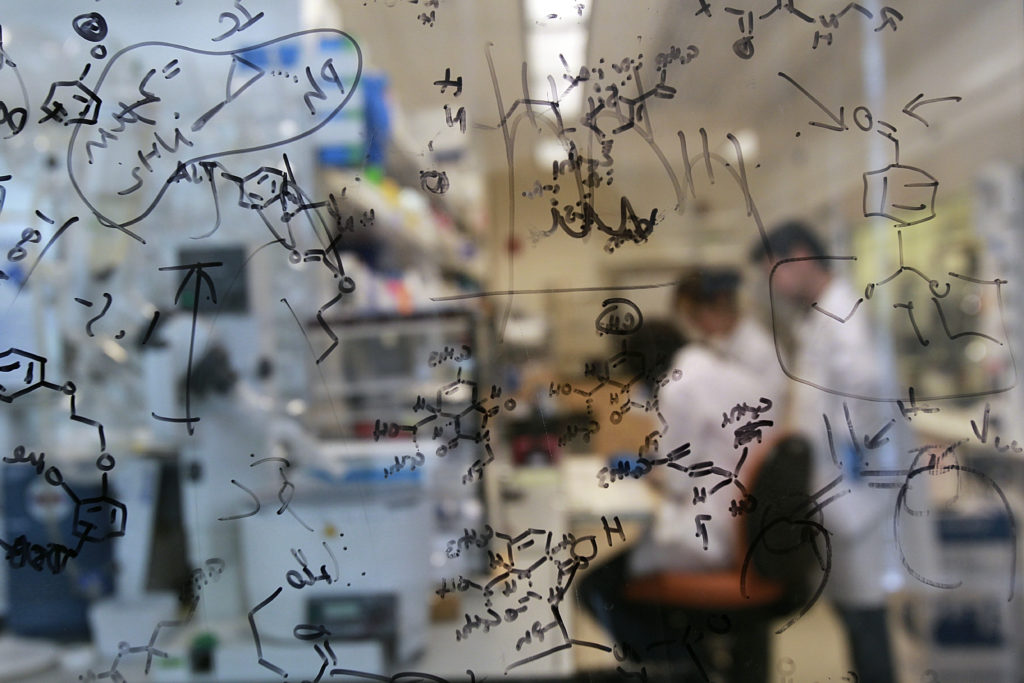 Ten years after the completion of the human genome project, the Broad Institute has become a major scientific powerhouse. Photo by Suzanne Kreiter/The Boston Globe via Getty Images

Researchers have launched a massive DNA collection campaign across Africa in the hopes of finding the roots of psychiatric diseases like schizophrenia and bipolar disorder, and addressing a bias that has favored research into DNA from North America and Europe.

A team led by scientists from the Broad Institute at the Massachusetts Institute of Technology and Harvard University began the project a few months ago. Focusing on Uganda, Kenya, Ethiopia and South Africa, the team hopes to get 35,000 DNA samples, many from people diagnosed with a psychiatric disorder.

Dozens of labs across those four countries are partnering with the U.S.-based researchers, and the programs are funding additional infrastructure and tools for the African labs to collect and analyze the samples.

DNA acquired from saliva or blood samples will be sent back to the Broad Institute, which will sequence it and look for genetic variants that could be linked with psychiatric disorders.
The labs in Uganda, Kenya, Ethiopia and South Africa will keep copies of the samples they send back.

The Broad Institute is also training researchers on the ground in those countries to use genetic data in projects beyond investigating psychiatric disorders. [The Wall Street Journal]

Why it matters: The genetic data that scientists are currently using to search for the origins of psychiatric disorders and other conditions are mostly from North America and Europe. DNA from Africa, Asia and South America is lacking in the genetic library and scientists are hoping a broader swath of data will enable them to discover what causes these diseases. At the same time, however, more factors may be in play beyond genetics as to why an individual develops certain traits. The more genetic information scientists have potentially enables them to create personalized treatments for conditions beyond psychiatric disorders like cancer.

5. Archaeologists search for the site of the Woodstock stage. 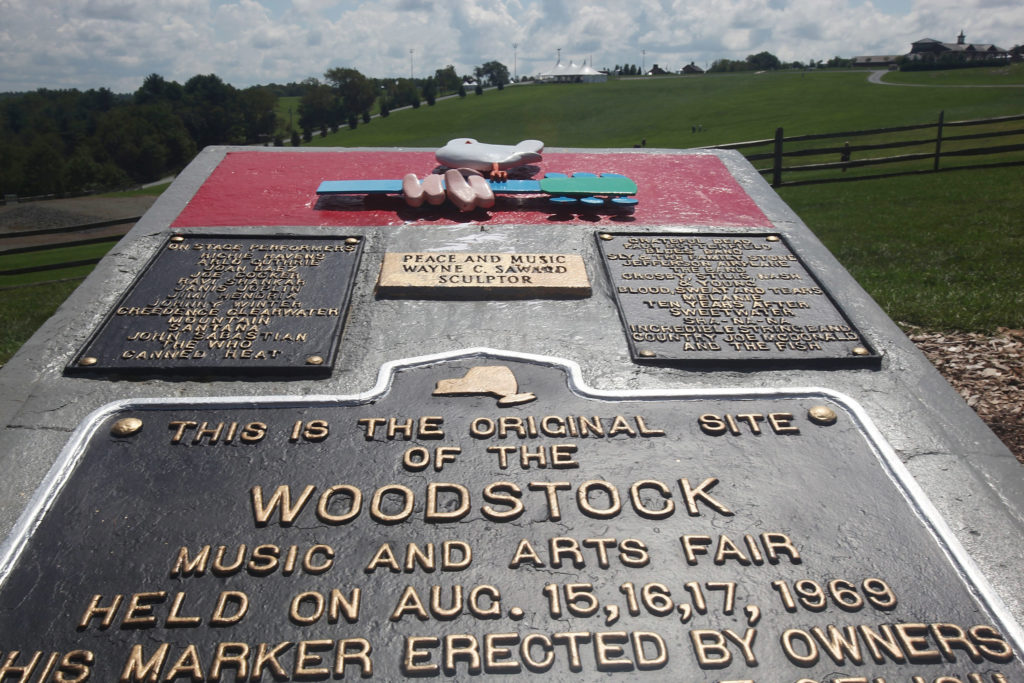 A plaque marks the original site location as the 40th anniversary of the Woodstock music festival in Bethel, New York. Photo taken in 2009. Photo by Mario Tama/Getty Images

A team of archaeologists is digging for artifacts on the ground where the famous Woodstock Music & Art Fair took place almost five decades ago.

The group from Binghamton University’s Public Archaeology Facility has been looking for clues to the exact location of the stage during the four-day festival that brought nearly half a million people to a farm in upstate New York in August 1969.

The hillside was re-graded in the 1990s to set up a stage for anniversary concerts held on the property and the area where the original stage was set up has since been covered in a layer of fill.

The team said it did locate part of the fence that separated the stage from the crowd. They said they will compare what they found from the dig with photos taken of the crowd and infrastructure to help pinpoint where the musicians performed. [The Associated Press]

Why this matters: Next year marks Woodstock’s 50th anniversary and many still flock to “Yasgur’s farm” to remember that cultural landmark. The site is on the National Register of Historic Places, and features a museum of 1960s history. As archaeologists and scientists expand the use of lasers and artificial intelligence in excavations, technology could help researchers and music-lovers revisit exactly where the era-defining concert took place. What a long, strange dig it’s been.

Left: Carmen Ashley, the great aunt of Antwon Rose II, cries as she holds the memorial card from Rose's funeral during a protest calling for justice for the 17-year-old on June 26, 2018 in downtown Pittsburgh, Pennsylvania. Photo by Justin Merriman/Getty Images