What’s it like being a black man in Milwaukee?

By several counts, Milwaukee ranks as the worst city to live in for black Americans.

Milwaukee is statistically the most racially segregated city in the nation. Minorities, including a 40 percent black population, are mostly concentrated in the city’s north side.

Milwaukee also has the highest incarceration rate for black men in the country, according to a 2013 study from the University of Wisconsin-Milwaukee.

These realities and more fueled the weekend of unrest in Milwaukee’s Sherman Park neighborhood following the fatal August 13 shooting of 23-year-old Sylville Smith by a police officer. Rioters set several businesses on fire, including a gas station outside the park.

Or, as Milwaukee resident Walter Bond told the NewsHour: The “community has been figuratively burning for a very long time … downtrodden by economic blight and sparse educational options.”

The NewsHour spoke with several black men in Milwaukee about their experiences living in the city. 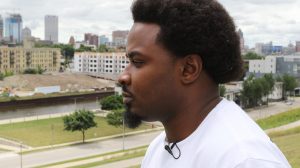 Khalil Coleman, 30, said what we saw in Milwaukee was an “American problem” and that the police brutality against blacks was not something that Milwaukee — or other cities that have recently seen racial unrest — created on its own. 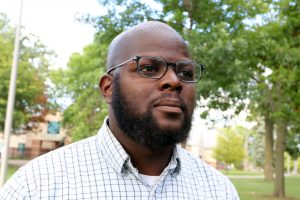 “[S]ome of the things that we’re supposed to be taking care of through our society, we don’t have those,” Moore said.

“[I]t is a struggle, but it’s a beautiful struggle because I’m very proud of my heritage, where I come from, being a black man, being from Milwaukee. Being kind of the underdog,” he said. “People saying you can’t do this or you can’t do that and then showing people that you can. Not just to show them, but to show yourself as well.” 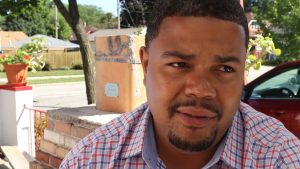 “When you travel to other communities, you go to Chicago, you go to Washington D.C., you’re kind of shocked to see black people looking well-to-do,” said Khalif Rainey, Alderman of Milwaukee’s Sherman Park neighborhood. “We don’t really experience that [here.]”

“We don’t really see men in our community, black men walking around with suits on unless it’s Sunday. They’re not walking around with a briefcase and going closing business deals,” he said, referring to the problems that have disportionately affected black Milwaukeeans.

“We don’t have those examples here in our community,” he said. 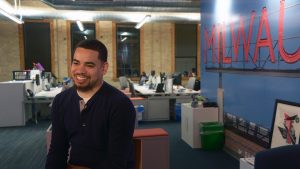 “So, it almost doesn’t matter that you followed the rules or internalized the playbook,” he said. “You are seen as belonging to a subclass here in our city.” 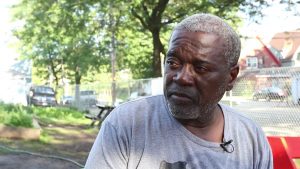 “We have been pushed up against a wall so much and told, ‘You don’t have a voice, you don’t speak,'” community activist Andre Lee Ellis said.

“We’re going places thinking there’s some great white hope that’s going to rescue us, when young black boys now think that by the age of 25 they’re going to be in jail or dead,” he said. 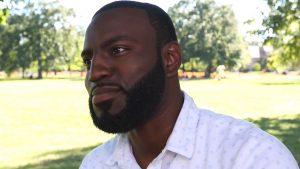 “You are reminded of being oppressed everywhere you go,” State Representative David Bowen said.

“There’s no way of escaping it whether you are walking in your own neighborhood, and your heart still beats fast when police come closer to you,” he said.

“You’re downtown on a weekend and clearly there are different ways that they treat white patrons than black patrons at a restaurant or at a night lounge. It’s very clear that you’re reminded that you are black everywhere you go in the city,” he said.

Left: What's it like living in "the worst city to be black in America?" PBS NewsHour's Kenya Downs spoke with several black men living in Milwaukee following the fatal police shooting of Sylville Smith earlier this month. Video by Joshua Barajas and Kenya Downs/PBS NewsHour