In the standoff over the Dakota Access Pipeline, neither side is calling it quits after a recent decision by the U.S. Army Corps of Engineers to halt a final leg of the project in order to research alternate routes.

The Army Corps on Sunday refused to grant the permit needed to build a section of the pipeline under the Missouri River near the Standing Rock Sioux Reservation, a decision that the tribe celebrated as a victory. The agency ordered that alternate routes be explored.

The Standing Rock Sioux and supporters say the $3.8 billion project disrupts sacred burial grounds, and threatens the tribe’s main source of drinking water and violates the terms of an 1851 treaty with the U.S. government. Large crowds of demonstrators set up camp near the proposed route in August, refusing to leave until the project is stopped. Now, following the Army Corps’ decision, both sides are assessing their next steps.

He then turned to the protesters’ next major hurdle.

“With the new administration coming in, it’s an opportune time for us to educate the President-elect and help him realize that what he has achieved is only because of the cost that our people have paid,” Archambault said. 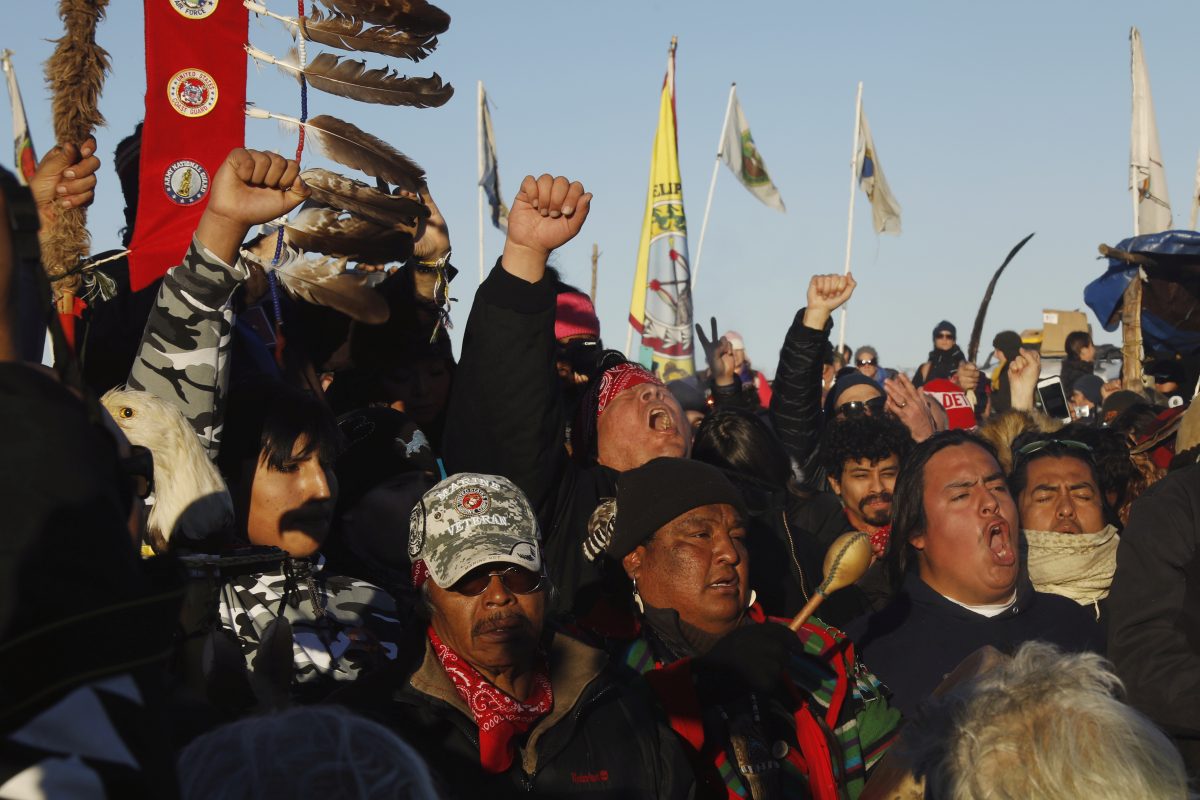 Native American “water protectors” and their allies celebrate that the Army Corps of Engineers has denied an easement for the $3.8 billion Dakota Access Pipeline, inside of the Oceti Sakowin camp as demonstrations continue against plans to pass the Dakota Access pipeline near the Standing Rock Indian Reservation, near Cannon Ball, North Dakota, U.S., December 4, 2016. Photo by Lucas Jackson/Reuters

Despite the harsh weather and Army Corps decision, reports say demonstrators continue to show up at Standing Rock. Some protesters took shelter in local casino resorts after blizzards blew through the main encampment.

Archambault has said that protesters should vacate the main encampment as North Dakota grows colder this winter. “It’s time for everybody to go home and be safe,” he told Reuters.

A federal court could still rule in favor of Energy Transfer Partners, ordering the Army Corps to grant a permit for the pipeline. Meanwhile, President Barack Obama could designate the federal land near the Missouri River a national monument, forcing Energy Transfer Partners to find another route. But it is unclear whether he has any plans to do so.

President-elect Donald Trump has said he supports the pipeline, and Trump’s spokesperson Jason Miller told the Associated Press on Monday that he will review the situation.

Trump has already appointed Scott Pruitt, a former Oklahoma attorney general, to lead the Environmental Protection Agency. Scott Segal, a partner with Bracewell LLP, a government relations firm that serves oil and gas industry clients, told the PBS NewsHour that Pruitt will revisit energy regulation and that some regulations “are probably going to be pared back.”

Trump also recently formed a Native American Coalition, which is markedly pro-business. New Mexico State Rep. Sharon Clachischillage, one of the coalition’s 27 members, said the Trump administration will “ease restrictions on American energy reserves worth trillions of dollars.” She said that will benefit Native Americans living in areas with abundant natural resources.

Kellyanne Conway, Trump’s senior advisor and former campaign manager, plans to visit Canadian tar sands before the President-elect’s s inauguration. She is also expected to meet with the Canadian super PAC Alberta Prosperity Fund, which called the future trip “a call to action for Alberta industry whose competitiveness and market access have been restricted by excessive regulation and public protests.”

The company behind the pipeline and other investors are also continuing their fight. Energy Transfer Partners, who is building the pipeline, said in a statement it is “fully committed to ensuring that this vital project is brought to completion and fully expect to complete construction of the pipeline without any additional rerouting.”

What can other pipeline protests learn from Standing Rock?

Some protesters plan to remain at the pipeline camp, despite tribal council leaders advising them to go home.

Chase Iron Eyes, a resident and citizen of Standing Rock, recently posted to Facebook urging the thousands that have traveled to his reservation to stay put “until this pipeline is dead, until DAPL & Law Enforcement are gone.”

“We may never get another opportunity to change our destiny,” Iron Eyes wrote. “We deserve a better way.”

Others are focusing on how the recent protests against the Dakota Access Pipeline could be replicated elsewhere.

Native and environmental groups are protesting the expansion of the Alberta Clipper pipeline, which the State Department approved in 2009 and spans 1,000 miles from Hardisty, Alberta to Superior, Wisconsin. Protesters say the construction will harm the production of wild rice on tribal land.

A separate project, the Trans Mountain pipeline, owned by Kinder Morgan Energy Partners, has proposed a new expansion that critics say could endanger nearby lakes. Kinder Morgan aims to begin construction on the pipeline by 2017 and complete it by 2019.

Winona LaDuke, the executive director of the nonprofit group Honor the Earth, called these pipelines “catastrophes waiting to happen” in a blog post.

In October, climate change activists tried to shut off pipelines in five places in the U.S. One of the protesters, Ken Ward, was arrested and charged with criminal trespass and burglary after he went live on Facebook while he closed a safety valve of the Trans Mountain pipeline, owned by Enbridge.

Ward said his actions were in solidarity with Standing Rock.

Left: The sun shines through cloud cover as high winds and a blizzard hit the Oceti Sakowin camp while "water protectors" continue to demonstrate against plans to pass the Dakota Access pipeline adjacent to the Standing Rock Indian Reservation, near Cannon Ball, North Dakota, U.S., December 6, 2016. Photo by Lucas Jackson/Reuters