After Israel Bosak’s tailor shop was destroyed in 1906 in an outbreak of violence against Jewish people in Russia, he fled to America with a respectable $65, more money than most immigrants brought at the time. But the U.S. government criticized Bosak for his small physique, claiming he would not be an asset to the workforce, and sent him back.

It was one of many racially-tinged institutional practices that empowered immigration officials to deny people of certain ethnicities or appearances — often people from South and Eastern Europe who were not considered “purely” white — by speculating about their ability to work. People with “poor physiques,” which was often said of Jewish immigrants, were “illy adapted” and would procreate “defectives,” a letter from a commissioner had warned the immigration and labor departments that year.

“Just like in the early 20th century, people make assumptions about your worth, about your ability to contribute and your likelihood of being dependent.” — Douglas Baynton, University of Iowa professor

More than a century later, historians of that era see echoes of those tactics in the administration’s efforts to cut in half the roughly 1 million immigrants who enter the country each year. And while the concept of whiteness has changed since the 18th century, they say that white nationalism has historically been a motivation behind U.S. immigration policy and the country’s social hierarchy.

The Reforming American Immigration for Strong Employment (RAISE) Act, introduced in February and upheld by President Donald Trump last month, prioritizes wealthy, highly-educated, English-speaking applicants over those who are trying to reunite with family through what is referred to as chain migration. Republican co-sponsors Sen. David Perdue of Georgia and Sen. Tom Cotton of Arkansas wrote in a statement that the majority of immigrants are “either low-skilled or unskilled” and “threaten to create a near permanent underclass for whom the American Dream is just out of reach.”

And when Trump threw his weight behind it from the White House last month, he implied new immigrants strain welfare, despite a law that already bars them from collecting it the first five years they are in the country.

“They’re not going to come in and just immediately go and collect welfare. That doesn’t happen under the RAISE act,” Trump said.

CHAIN MIGRATION cannot be allowed to be part of any legislation on Immigration!

Douglas Baynton, a professor of American cultural history at the University of Iowa who wrote about Bosak in his book, “Defectives in the Land,” says this emphasis on skills, education and language recycles early efforts to limit immigration based on ethnicity and race.

“Just like in the early 20th century, people make assumptions about your worth, about your ability to contribute and your likelihood of being dependent,” Baynton said.

And a merit-based system like the RAISE Act promotes is what the newest CEO of a white nationalist, “alt-right” organization Identity Evropa said he favors.

“If you are an immigrant and you get a green card and you become a citizen, you can bring your entire extended family,” said Elliott Kline, who goes by Eli Mosley. “Diversity to us just means less white people, means putting diversity ahead of meritocracy.” 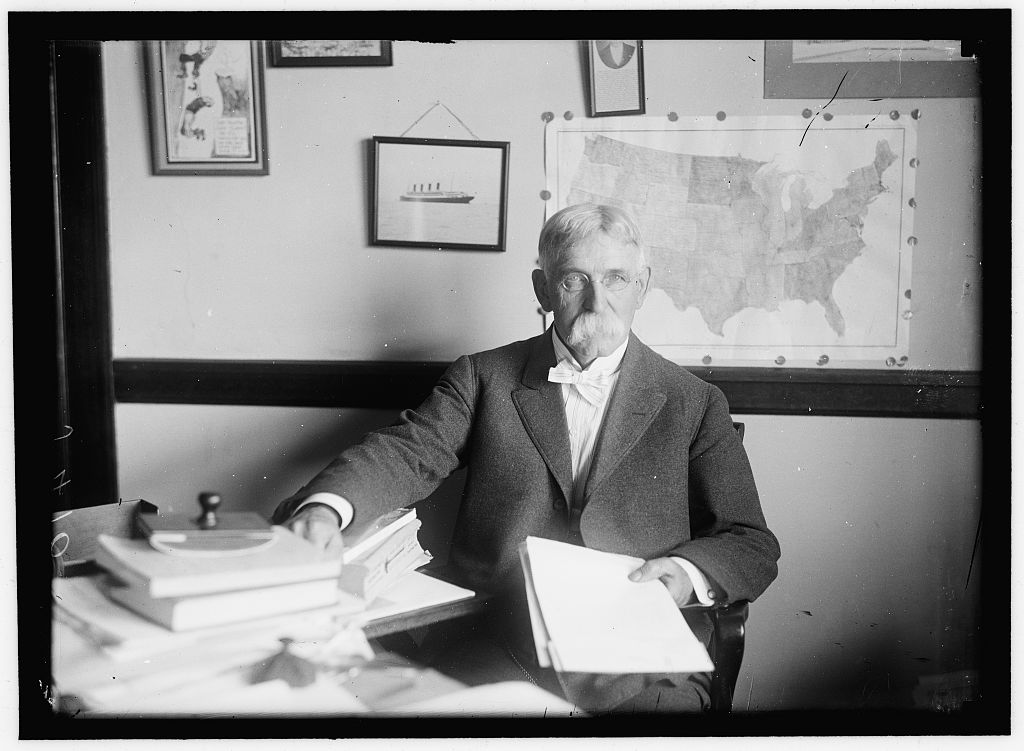 ‘Nordic was the purest’

People with political power in the Thirteen Colonies created a hierarchy of “whiteness” before the founding of the United States.

While prejudices against darker skin existed in other regions, José Moya, a Professor of American history at Barnard College, said the concept of “whiteness” and its use in the U.S. likely emerged from Anglo-Saxons in their conquest of the Americas in the 17th and 18th centuries.

A clear divide existed: black people were kidnapped and brought to the Americas as slaves for free white landowners. But Moya said the Anglo-Saxons also openly declared that people who did not look, speak or practice religion like them were inferior in other ways.

He referred to the late 1750s, when Benjamin Franklin, who would later become a founding father and abolitionist, had determined that the tens of thousands of German people in Pennsylvania were “palatine boors.” Franklin said in a letter to his friend, a scientist, that they could “no more adopt our ways than they can adopt our complexion.”

READ NEXT: Electoral College is ‘vestige’ of slavery, say some Constitutional scholars

At the time, Franklin was a printer, worried Pennsylvania would become a “colony of aliens.” So he helped in an effort to Anglicize German people, joining as a trustee for schools to teach German children English and religion.

By 1790, a Naturalization Act declared that “all male white inhabitants” would become citizens, a time when the country started enforcing its hierarchy of whiteness.

“Nordic was purest,” Moya said. “Eastern and Southern Europeans were ‘undermining the purity’ of the American stock.”

In 1882, the U.S. passed the Immigration Act, which imposed a 50 cent a head tax for every person who the country deemed “undesirable” and was sent back. That same year, it passed the Chinese Exclusion Act, declaring a moratorium on Chinese labor immigrants.

Public health inspectors would enforce this by making snap judgments at the border, picking out people who they thought looked peculiar, had the capacity for lunacy, criminality, or promiscuity or looked ugly. Italians, Slavs, and Jewish and Irish people were eyeballed for their ability to bolster the economy and either sent back or stigmatized.

While Baynton said these judgements were not always inherently racist — immigrants also couldn’t be blind or deaf, for example — they often reinforced preexisting popular stereotypes.

Those stereotypes said Italians were prone to violence because of their ties to mafias. They couldn’t control their tempers and were associated with feeblemindedness, like Slavs. Jewish people, like Bosak, had poor physiques and were greedy. Irish were characterized as alcoholics who were vulnerable to insanity, he said.

“A lot of it really was just stereotypes that were just reproduced in flawed studies,” he said. “They would look at the first generation of people in institutions for mentally ill and find a lot of Irish or Jewish immigrants there, but it was because they just arrived and were poor … they used this as evidence.”

These types of now-defunct, scientific studies supported the contagion of the eugenics movement, an era when it was a common to believe that social problems, intellect, morality, disability, beauty and even laziness were hereditary.

Congress, worried about the efficiency of the inspection system, used the ideals behind eugenics to pass the 1924 Immigration Act, now seen as one of the most racist in American history. It only allowed for a two percent increase of any ethnic group entry based on census data from 1890. Meanwhile, the Ku Klux Klan, which was exclusively Protestant, was experiencing a revival of political power.

“So then the English would have huge quotas that they couldn’t fulfill, then Italians, Jews and Russians had tiny quotas,” Moya said.

Eugenics and the new immigration law were praised by Adolf Hitler and the Nazis. U.S. Attorney General Jeff Sessions also recalled it in a 2015 radio interview with Breitbart, an interview highlighted by the Atlantic.

“In seven years we’ll have the highest percentage of Americans, non-native born, since the founding of the Republic,” he said. “When the numbers reached about this high in 1924, the president and Congress changed the policy, and it slowed down immigration significantly.”

The quotas were finally erased in 1965 amid the civil rights movement, after people took to the streets and staged sit-ins, enduring beatings and showed they were willing to die just for equal rights. It was the same decade that the KKK reemerged again, with bombings at black schools and churches among other violence. 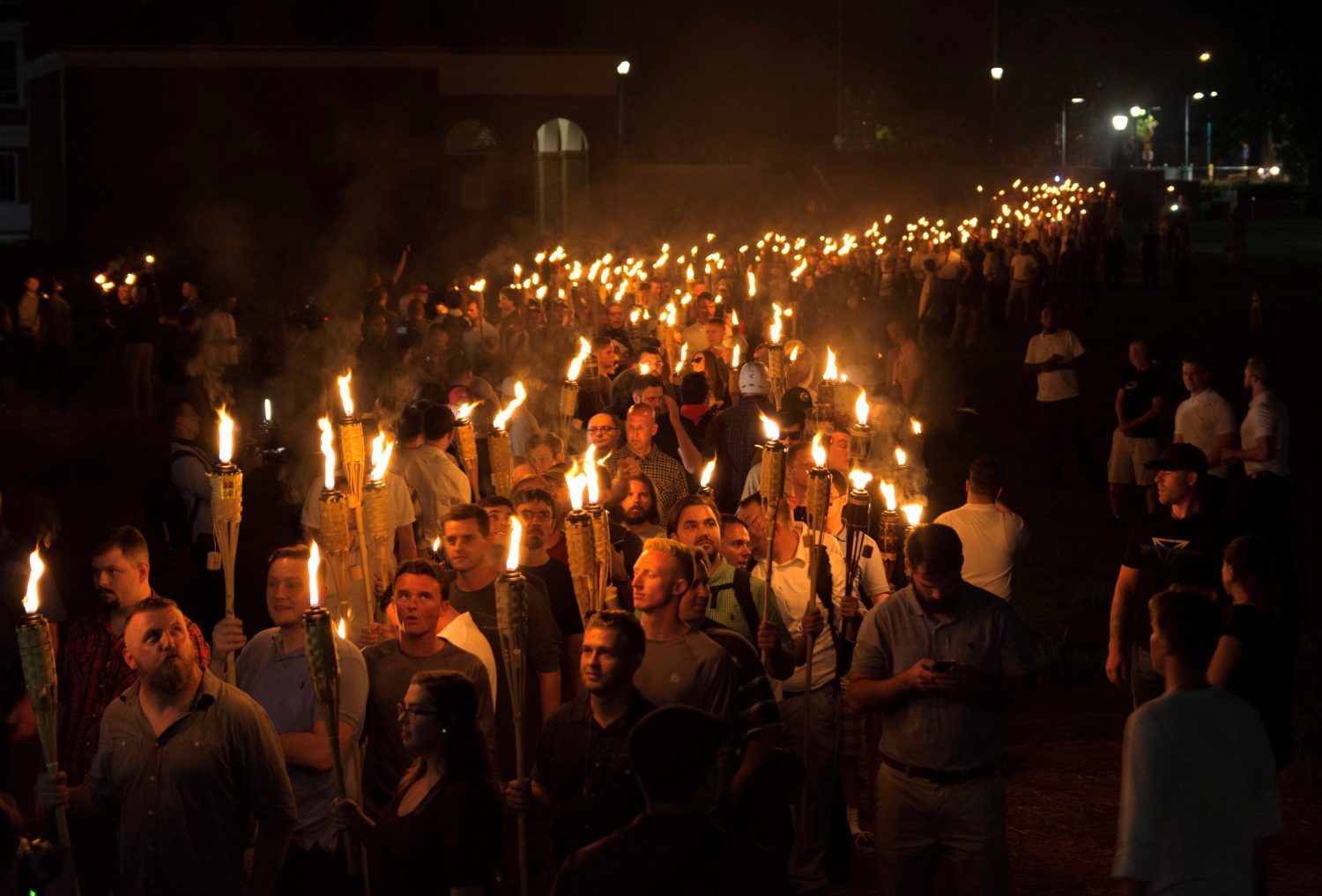 White nationalists carry torches on the grounds of the University of Virginia, on the eve of a planned Unite The Right rally in Charlottesville, Virginia, on Aug. 11, 2017. Picture taken August 11, 2017. Photo by Alejandro Alvarez/News2Share via Reuters

White nationalists are ‘trying to create something new’

Kline helped organize the hundreds of men who rattled the country as they marched through the University of Virginia campus in Charlottesville, Virginia, wearing polo shirts and khaki pants and carrying tiki torches on the night of Friday, August 11.

It was a preamble to a “Unite the Right” rally, an effort to protest the removal of a statue of a Confederate general from a local park, that left a woman and two police officers dead.

But he says history about the ranks of white people, and the exclusivity of the KKK, do not match with the ideals of his white nationalist movement.

“I don’t know a single person who believes in a hierarchy among whites,” Kline said. “We don’t need to go backwards or look backwards. We’re trying to create something new … We haven’t said, ‘Screw our forefathers,’ but we are admitting that they ultimately failed.”

His group includes German people and Irish people as well as atheists, Pagans, Catholics and people from other religions. But there are some similarities: It does not include Jewish people or biracial people and, “It’s not like an exact science. I do take it on a case-by-case basis and I don’t think it’s something we need to decide today.”

“My opinion of what white is today, is people who are historically European racially and who share the same kind of story … oppression, in reality,” he said.

Kline said his father has British, Catholic and an Irish Protestant heritage with ethnic Saxon from the Transylvania Mountains in what is now Romania on his mom’s side.

He said his great, great grandfather returned to oppression in the Transylvania Mountains after fighting Russians in Siberia during World War I.

“They were told they weren’t allowed to speak Saxon in public, then it started turning violent,” he said. “So my family gathered their things and came to America.”

Left: Members of the U.S. Congress Joint Immigration Commission, which existed from 1907 to 1911 and studied the effects of immigration in the U.S., pose for this undated photo. Photo by Bain News Service/Library of Congress