Why are fewer people going to college?

In today’s economy, earning a college degree is still a winning choice. The unemployment rate for Americans with bachelor’s degrees or higher is just 3.2 percent, compared to a national average of 6.1 percent. So why, then, did college enrollment last year fall by nearly half a million?

Between 2012 and 2013, the Census Bureau reported last week, 463,000 fewer people were enrolled in college. In fact, this is the second year enrollment has fallen by that much, bringing the two-year total to 930,000 fewer college students, bigger than any drop before the recession. The Census Bureau has been collecting this data through the Current Population Survey since 1966.

The decline was to be expected, said Anthony Carnevale, director of Georgetown’s Center on Education and the Workforce, repeating the old economics adage that the more things go up, the more they’ll eventually fall. And go up it certainly had. The recent decline comes on the heels of a record 3.2 million boom in college enrollment between 2006 and 2011.

So where is the current decline happening, and what can that tell us about why it’s happening? Not all colleges are the same, and not all students have equal access to higher education. Enrollment in two-year colleges decreased by 10 percent, while enrollment in four-year schools actually increased, albeit by only 1 percent.

Hispanic college enrollment had been increasing dramatically in the five years up to 2012, adding a million students, far more than blacks or Asians added to the collegiate ranks. But that growth ground to a halt between 2012 and 2013. Hispanics, the Census Bureau points out, are more likely than blacks, whites or Asians to attend two-year schools, reflecting the drop seen in this latest data.

College enrollment always follows the economic cycle, said Carnevale. When the economy is underperforming, the college campus is a “safe harbor.” As he put it, going to school beats living in the basement and dealing with your parents when you cannot find a job. But when the economy improves, and jobs are more available, fewer people flock to the ivory tower. That pattern tells a cyclical story about college enrollment.

There’s a structural story here, too, though. It’s hard to ignore, over the long-term, how much more widespread college-going has become. The 1960s and 1970s forever changed college enrollment in America, Carnevale said; the Vietnam War and the draft gave new meaning to the college campus as “safe harbor.” Many more jobs now require a college education, and despite the increasing supply of college grads, the college wage premium (the earnings advantage to having a college degree) remains extraordinarily high, according to Carnevale. 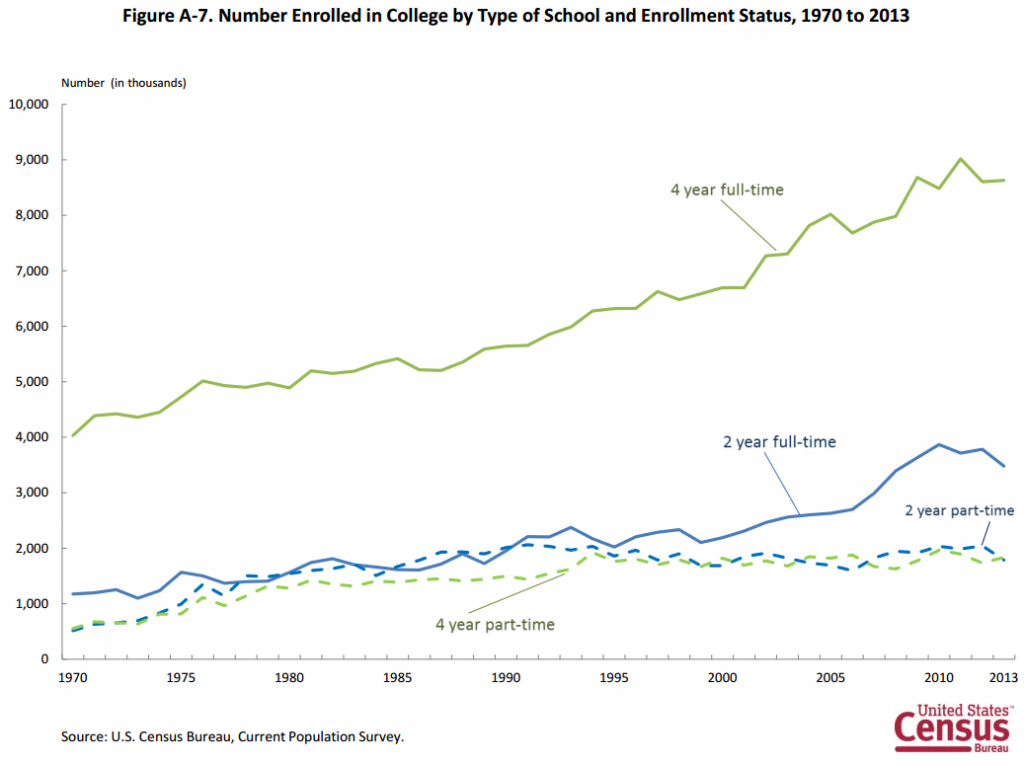 A Pew report released earlier this year, aptly titled, “The Rising Cost of Not Going to College,” shows how the earnings disparity between high school and college grads has widened for successive generations of workers ages 25 to 32. The median 2013 salary for young millennials with at least a bachelor’s degree was $45,500, while their peers who only went to high school were making just $28,000 a year. A two-year degree increased their earnings, but only to $30,000.

The returns to going to college will remain high, but if college attendance declines next fall, and continues to plummet the year after that, Carnevale said, the structural storyline may shift to the systemic reasons why Americans are choosing not to enroll: Is the cost of higher education rising too fast? Are students unprepared? Or not sold on the benefits of going? And then there’s the problem about which employers already complain — that colleges aren’t preparing students for the jobs available.

Most of the economics research, said Kurt Bauman, chief of the Census Bureau’s Education and Social Stratification Branch, supports the cyclical interpretation of college enrollment, where recessions drive people into school, and recoveries keep some of them from going. It’s not his business to make any judgements one way or the other, but Bauman pointed out one possible flip side to that conclusion: if economic times are tough, earning some money immediately might be a recent high school graduate’s first priority. In that case, the cost of college — and the cost of not working — could simply be prohibitive.

Indeed, said Carnevale, it can be appealing to make money right out of high school, especially for men, who have traditionally been the ones to find jobs that don’t require a college degree (think construction or oil production), and thus have been enrolling in college at a lower rate than women for years now. But their wages flatten out much sooner than the wages of their peers who get four-year college degrees before starting their careers.

The most cost effective college in America? Not Harvard…

So during a recovery, high school graduates face a choice: they can either find a job to make money or increase their debt loads with the hope that going to college will pay off. Of course, making that gamble is a lot more financially manageable for some Americans than for others, depending on their socioeconomic status and where they’re trying to go to school.

Will your college degree pay for itself in 20 years?

The drop-off in college attendance between 2012 and 2013 was across all income levels, although it was sharpest among the Census Bureau’s middle-income range — families making between $20,000 and $75,000.

That fewer of those families are sending kids to college is bad news for colleges, Carnevale said, because it strikes at the heart of their business model, although it’s less of a threat to selective institutions, which already have long lines to entry and intentionally keep their enrollments small.

For prospective and current college students, though, declining enrollment isn’t bad news at all, Carnevale insisted. It doesn’t mean a college education is any less valuable. In fact, it’s a good time to graduate, Carnevale thinks, but 2017 will be even better, he said, predicting the recovery will be “fully baked” by then.

Of course, the advantages of going to college — and graduating — he cautioned, depend on what degrees students pursue and what they do with them. The six-year graduation rate for students of all four-year colleges is 59 percent; at public schools, though, it’s 57 percent, while at private four-year schools, it’s 66 percent. At for-profit institutions, the graduation rate slips to 32 percent. But “the degree, itself,” Carnevale said, “is not what you should aspire to.”

With misalignment between the labor market and higher education, there’s no question, Carnevale said, that a more efficient system is needed, and he predicts that there’s “an industry in waiting” when it comes to job training.

But speaking to the NewsHour from his Georgetown offices, Carnevale’s very aware of how “education” and “training” have become class-based terms. That is to say, no one receives “training” from Georgetown. An education, a luxury for most Americans, was traditionally intended to prepare students to, as Carnevale put it, “live fully in their time.” The conundrum, he sees, however, is that they can’t do that if they don’t have a job.

Watch Paul Solman’s reports on education and the job market, including the struggles of liberal arts graduates.

Left: College enrollment has declined by nearly a million since 2011. Photo by Flickr user Tobias Leeger.