Why most of us lean to the right when we kiss

Your brain is an organ of two halves – the left side and the right side. And there are many brain functions, such as language skills or which hand you write with, which are organised mostly in one side of the brain or the other.

Simple behavioral tests have now allowed us to see how this organisation is revealed through biases in how we see and interact with the world – and each other – often without us being aware of it.

Examining how people perceive a diagram of variously orientated lines and angles provided clues that people typically have a subconscious bias for seeing things set out in clockwise orientations.

We then realized that this might also be related to a number of physical instincts that people have, such as which way they turn their heads. After looking at recent research in visual psychophysics and visual neuroscience, we saw various perceptual and behavioral phenomena in which humans can have a directional bias.

Many of these turning behaviors are seen early in life. For example, infants have an initial bias for turning the head to the right (and consequently extending the left arm outward to compensate for that movement). 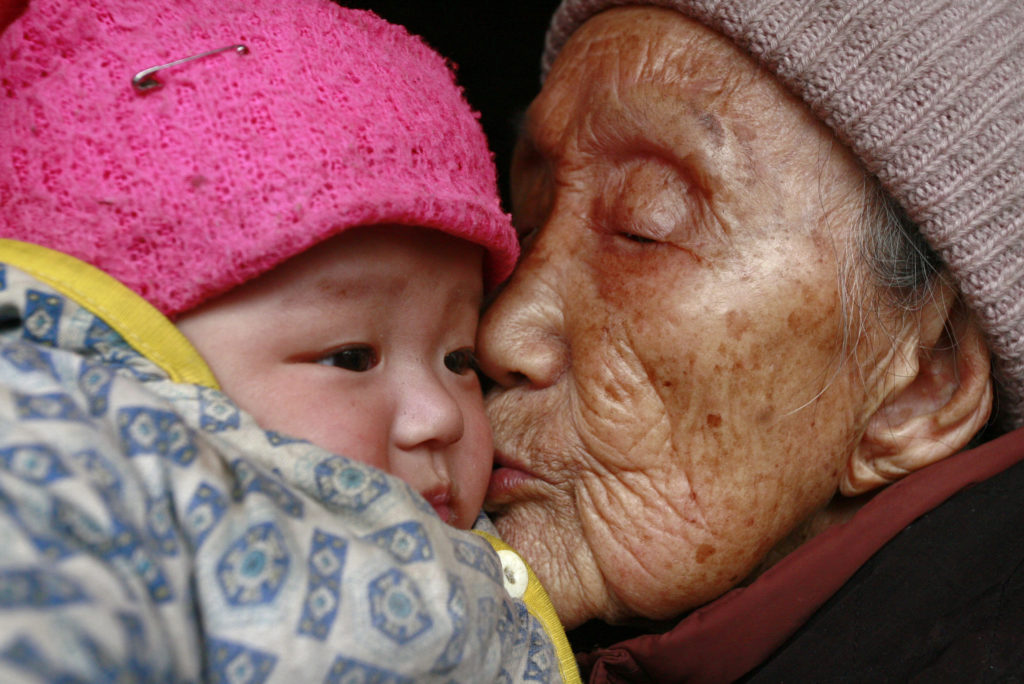 A woman kisses a three-month-old baby at a village in Suining, southwestern China’s Sichuan province January 23, 2007. Photo by Reuters

Some previous research found that such an instinctive turn to the right extends to adulthood – when an adult kisses another on the lips, their heads tend to automatically lean to the right. But is this an extension of the bias that humans are born with, or do people simply learn to kiss that way?

In Western societies it is commonplace to see people kiss in public, on television, and in films. But are these screen kisses reflecting society, or do they influence how people behave? The prior research on the subject was all conducted with kissing in what are known as “W.E.I.R.D.” – Western, Educated, Industrialized, Rich and Democratic – societies. So the conclusions might not reflect what humans naturally do in the absence of learning through observation.

Bangladesh seemed like an interesting non-W.E.I.R.D. country to examine this. It is a conservative Muslim country where kissing is prohibited in public, and even censored from television or films. So, whereas similar results from the W.E.I.R.D. countries could be attributed to social learning or socio-cultural factors, the same cannot as easily be said in Bangladesh.

In our study, we asked a number of married couples in Bangladesh to kiss privately in their own homes. They then went into separate rooms to report on various aspects of the kiss independently of each partner.

A kiss is still a kiss

The person being kissed, regardless of whether they were left or right handed, responded by matching the partners’ head leaning direction. It felt awkward to go the other way as reported by most of the kiss recipients and kiss initiators in our study.

READ NEXT: If kangaroos went to class, all the desks would be lefties

It turns out that humans are similar, even if our social values, and the habits we are exposed to, differ. This bias in the act of kissing is likely innate and determined by the brain splitting up tasks to its different hemispheres, similar to being either right- or left-handed. It is perhaps specifically concerned with the functions in the left cerebral hemisphere, located in the emotion and decision-related areas of the brain.

Different hormone levels (such as testosterone) in each hemisphere and neurotransmitters might be unevenly distributed to each hemisphere (such as dopamine, involved in reward behaviours) and give rise to a bias to turn right.

If you do lean in for a kiss to the left, you may be in the minority. But don’t worry – if the person you are kissing wants to be kissed, they will likely go left, too.