Why you shouldn’t expect wages to rise any time soon

Editor’s Note: The Federal Reserve’s Open Market Committee convenes in Washington, DC, Tuesday to deliberate its next step on interest rates. If the FOMC agrees that the labor market is strong enough and inflation expectations are moving back towards its 2 percent target, it may remove language about being “patient” and adopt a more hawkish posture toward raising rates sooner rather than later. We’ll know on Wednesday when the committee releases its report, on which Janet Yellen will elaborate at an afternoon press conference.

We’re adding jobs like it’s 1999, but American workers just can’t get a raise

It’s hard to argue that the labor market isn’t improving. The unemployment rate is now at 5.5 percent, and the economy added 295,000 jobs in February. The thorn in the side of many a strong jobs report, though, has been wages. Economists expect wages to rise when unemployment falls, and that’s just not happening. Because wages remain sluggish, monetary policy doves are urging the Fed to hold off on raising rates. Yellen acknowledged that wages are not where they should be at her Congressional testimony last month. 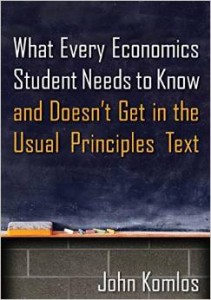 “Waiting for wages to rise,” economist John Komlos argues in the following column, “is like waiting for the Messiah.” The supply of surplus labor, he thinks, is too great. Komlos’ perspective on this issue complements his first column on Making Sen$e earlier this month in which he argued that America has a long way to go before reaching truly full employment.

Professor emeritus of economics and of economic history at the University of Munich, Komlos is the author of the new textbook, “What Every Economics Student Needs to Know and Doesn’t Get in the Usual Principles Text.” He’s also taught at Harvard, Duke and the University of Vienna.

Month after month there is the great expectation that wages will finally begin rising and living standards might just begin to inch upward for Everyman on Main Street. And month after month there is great disappointment at the inconvenient truth that wages seem to defy gravity. How is that possible, the pundits ask, with all the hype about job creation, a decreasing unemployment rate, and a growing Gross National Product? After all, if demand increases for workers, they learned in Econ 101, wages should increase. Does the economy defy the logic of Econ 101? Well, not quite.

The confusion stems from the fact that the esteemed professors of Econ 101 unfortunately forgot to mention a seminal article by W. Arthur Lewis, published in 1954, on the dynamics of a labor market with surplus labor, for which he received the Nobel Prize. The logic of the article is straightforward: as long as there are plenty of workers who are willing to work for the prevailing wage, one cannot go to the boss for a raise because she’ll just point to the unemployment lines outside of the window with people clamoring to get in the door. The implication for today’s U.S. economy is that regardless of the number of jobs created, as long as there are still roughly , the nearly 300,000 jobs created last month are not going to make much of a dent in the immense amount of surplus labor available to corporations. So there is no need for them to raise wages.

There are approximately 24 million people who are putting a tremendous downward pressure on wages.

Plus, let us not forget that a lot of people left the labor market after the financial crisis began. The participation rate even among working-age adults (25-54 year olds) who did not take early retirement declined by 3.6 percent. They are mostly workers who were so discouraged during the crisis that they are not even looking for a job right now but could (and likely would) reenter the labor market if conditions were propitious and hence, add another 7 million to the hidden surplus labor supply. So there are approximately 24 million people who are putting a tremendous downward pressure on wages.

But that’s not all the slack in the labor market. The labor force is growing by about 81,000 a month — at least that was the average during the last four years. These are new entrants who perhaps quit high school and started looking for a job or graduated college or, for a myriad of other reasons, are now ready to work. We’ve been conveniently neglecting that the monthly reports on the jobs created are gross figures and leave these new entrants out of consideration. The average number of jobs created during the course of the last four years was 207,000 per month; subtracting the 81,000 new entrants from the jobs created leaves an average of 126,000 net jobs created monthly. If that rate were to continue indefinitely we would need roughly 190 months, or roughly 16 more years, to absorb the surplus labor before any upward pressure were felt on median wages around 2031.

And that is a rather optimistic view. A more pessimistic perspective would need to consider that globalization, as well technological unemployment, are immensely powerful forces keeping a lid on U.S. wages. In fact, as unbelievable as it may sound — as it is a well-kept secret — the median weekly real income of men (including both wage and salary workers) working full time is an amazing $80 per week less today than it was 36 years ago in 1979, when converting to current dollars. That adds up to some $4,000 per year, and let’s keep in mind that living a middle-class life is more expensive today than it was a generation ago when there were no cell-phone contract bills to pay.

To be sure, the pattern among women is different. Their wages increased as their educational level increased and as the degree of discrimination diminished. But those developments came to a halt by the 21st century, so women’s wages have also been stagnating for the last decade. The upshot was that household income increased as more and more women entered the labor force, but that source of income reached its limit by the end of the 20th century. In the intervening 15 years, median household income has declined by an incredible $5,000 (or 8.7 percent).

But Wal-Mart just raised its minimum pay to $9 an hour, you say; isn’t that a good sign? Well, remember Ford Motor Company’s famous $5-a-day-pay back in 1914? Adjusted for inflation, that wage would be worth no less than $14 an hour today. Of the 77 million workers who were paid an hourly wage last year, 55 percent earned less than the Ford workers of a century ago! That’s what we call progress…

Or look at it another way: translated into an annual income, the Ford pay would be worth some $24,000 today. That is below the poverty level for a family of four, but about a quarter of U.S. households earned less than that. There is typically more than one worker per household, so that implies that two workers of these households do not bring home as much as one Ford worker did back then.

No wonder that in spite of all the hype about job growth and GNP growth, for most people on Main Street, it still feels like we’re in a permanent recession. According to a recent Gallup Poll, some 42 percent of the population is “struggling” or “suffering” financially. As far as I’m concerned, that is the decisive statistic because it is the best indicator of how people actually feel about their overall economic situation and prospects. In other words, the economy as currently constituted is able to produce a lot of wealth for those who are already rich and famous, but it is not able to create decent lives for nearly half the population.

If the economic news is good, why did voters say it’s bad?

We should not be too surprised by the Gallup statistics. The widely cited declining unemployment rates are actually confusing indicators of the health of the labor market because so many of the employed found work only part time and in low-wage occupations. Significant is the inconvenient truth that the number of people employed full time today — seven years after the recession began — is still an amazing one million workers less than it was in Nov. 2007! In contrast, the number working part time has increased since then by a full 2.7 million. All of them would like to work full time but such jobs are in short supply. Plus, there are 10 million working poor (based on 2012 data), who are poor in spite of the fact that they have a job.

In other words, the definition of recession is totally outdated. It should be defined in terms of full-time jobs: the economy should be considered in recession as long as the number of full-time workers is lower than at the beginning of the downturn. If we looked at our economy that way, we’d still be in recession and would not be perplexed about the “jobless recovery.”

In sum, waiting for wages to rise is like waiting for the Messiah. The true believers will continue to assert that the magic moment is just around the corner, but the moment just keeps on being postponed.

The $24.80 average hourly wage widely reported in the media is misleading anyway because it includes the incomes of the likes of Lloyd Blankfein and Jamie Dimon, the lords of finance, whose annual compensation was in the $10 million range — even in 2009 when their jobs were propped up by the Obama administration at taxpayers’ expense. As you can well imagine, this skews the averages considerably. A single super income could potentially quadruple the average income of a thousand families living in the South Bronx. We could eliminate such areas of poverty — at least statistically — if Blankfein were to move back into his old neighborhood.

In sum, waiting for wages to rise is like waiting for the Messiah. The true believers will continue to assert that the magic moment is just around the corner, but the moment just keeps on being postponed. In the meantime, there are too many statistical imposters: unemployment numbers, figures on job creation, GNP growth rates and average wages. The obstacles to President Obama’s vision of “Middle-Class economics” are still too numerous: too much surplus labor, too much globalization, too much technological unemployment, and too little bargaining power for labor without union backing. And no amount of wishful thinking about the Messiah or chanting of “growing the economy” is going to change those impediments without concerted government action. Welcome to the labor market of the 21st century!