AL-JAHRA, Kuwait — On the outskirts of Kuwait City, the love Kuwaitis have for former U.S. President George H.W. Bush could be seen in 2016 on a billboard one Bedouin family put up to announce their son’s wedding.

That son being Bush al-Widhan, born in the aftermath of the 1991 Gulf War that saw U.S.-led forces expel the occupying Iraqi troops of dictator Saddam Hussein.

“He was a real man, a lion,” said Mubarak al-Widhan, the father of the Kuwaiti Bush, of the American president. “He stood for our right for freedom, and he gave us back our country.”

With Bush’s death , his legacy across the Middle East takes root in that 100-hour ground war that routed Iraqi forces. That war gave birth to the network of military bases America now operates across the Persian Gulf supporting troops in Afghanistan and forces fighting against the Islamic State group in Iraq and Syria.

However, Bush ultimately would leave the Shiite and Kurdish insurgents he urged to rise up against Saddam in 1991 to face the dictator’s wrath alone, leading to thousands of deaths. That mixed picture only extends to the presidency of his son, George W. Bush, who ordered the 2003 U.S.-led invasion of Iraq that overthrew Saddam, whom he once famously described as “the guy who tried to kill my dad one time.”

Saddam was the invader in 1990. Pres Bush made some bad mistakes in the Middle East. But his understanding of the region was at a level of sophistication entirely unfamiliar to the current incumbent of the Oval Office. https://t.co/CCWxjXcvjA

To me, “Bush” and “Iraq war” will always evoke 1991. He inaugurated the era of US mass killing in the Middle East that we live with still. 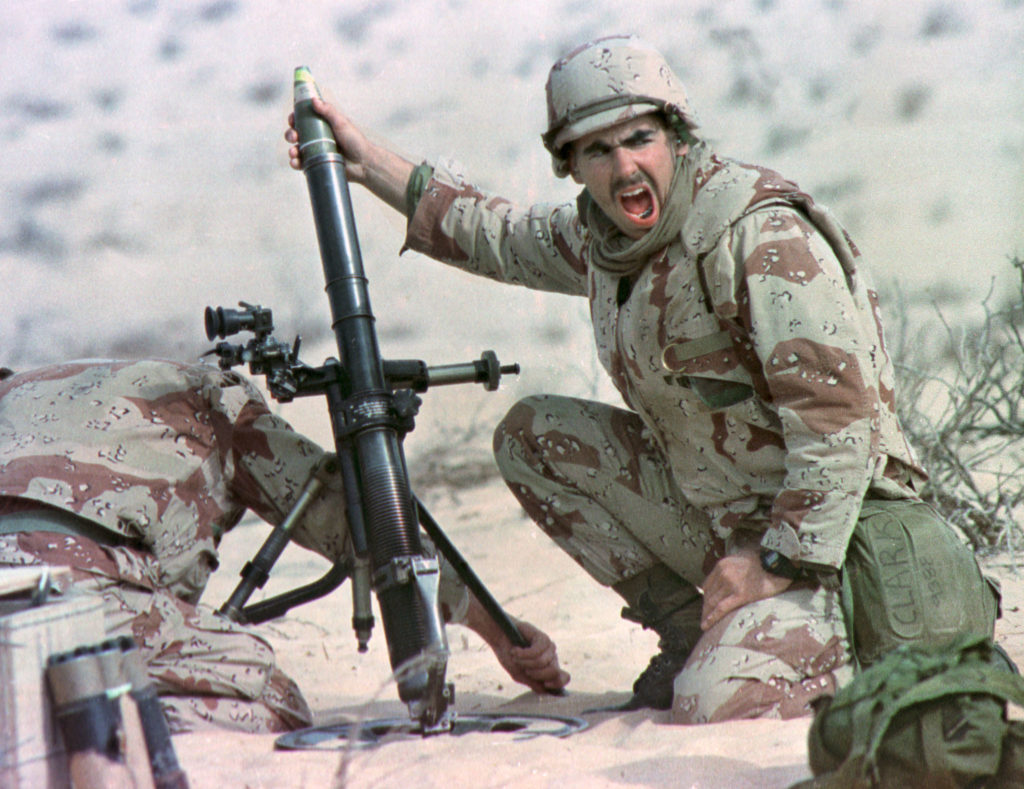 File photo of Lance Corporal John Clark, of the 6th Marines, shouting to colleagues while preparing to fire a mortar shell on January 11, 1991. The Marines were conducting a live fire session while preparing for the Gulf War. Iraq will mark on January 17 the 10th anniversay of the Gulf War that ended a seven month occupation of Kuwait. Reuters

“I feel tension in the stomach and in the neck … but I also feel a certain calmness when we talk about these matters,” the elder Bush once said about the 1991 Gulf War, according to biographer Jon Meacham. “I know I am doing the right thing.”

Iraq invaded Kuwait on Aug. 2, 1990, angry that the tiny neighbor and the United Arab Emirates had ignored OPEC quotas, which Saddam claimed cost his nation $14 billion. Saddam also accused Kuwait of stealing $2.4 billion by pumping crude from a disputed oil field and demanded that Kuwait write off an estimated $15 billion of debt that Iraq had accumulated during its 1980s war with Iran.

A World War II fighter pilot shot down fighting against the Japanese, Bush came to view Saddam as similar to Adolf Hitler, a madman who seized neighboring Kuwait and could plunge the world into conflict if he continued into Saudi Arabia. With Vietnam still a potent memory, Bush rallied together a coalition of nations to back the U.S. as it deployed troops to the region and began bombing runs. He talked Israel out of retaliating for Iraqi Scud missiles attacks for fear of alienating Arab allies.

On Feb. 24, 1991, U.S. troops and their allies stormed into Kuwait. It ended 100 hours later. America suffered only 148 combat deaths during the whole campaign, while over 20,000 Iraqi soldiers were killed.

In the aftermath of the campaign, some called for Bush to continue into Iraq and topple Saddam. Bush in speeches encouraged Iraqis to rise up against the dictator, while privately hoping someone within his own military would depose him.

“To occupy Iraq would shatter our coalition, turning the whole Arab world against us, and make a broken tyrant into a latter-day Arab hero,” Bush later said. “It would have taken us way beyond the imprimatur of international law, … assigning young soldiers to a fruitless hunt for a securely entrenched dictator and condemning them to fight in what would be an unwinnable urban guerrilla war.” 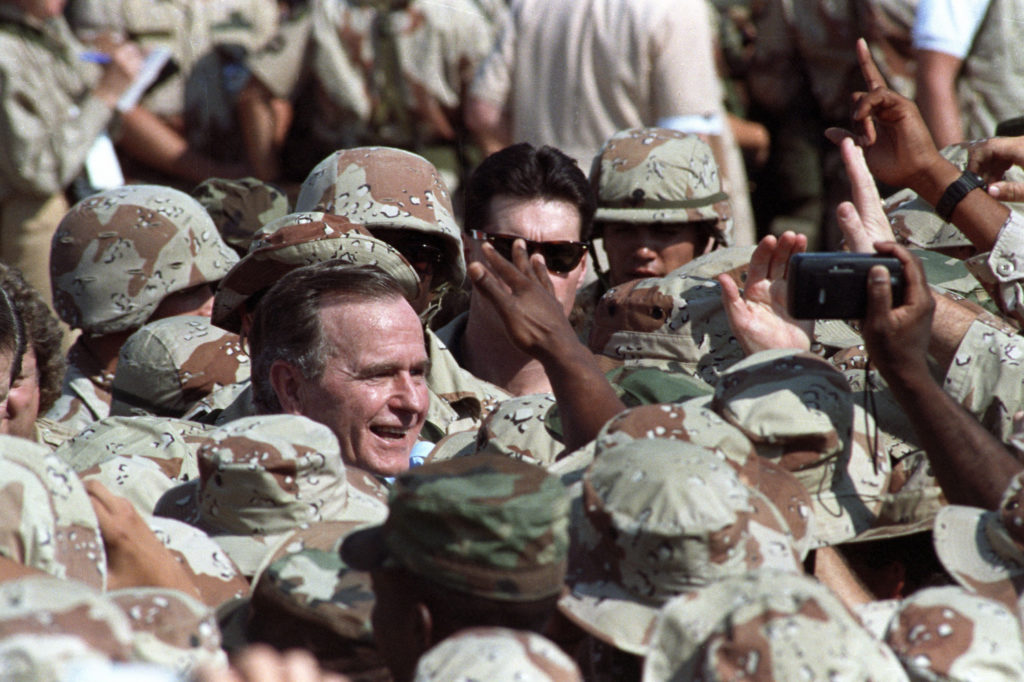 President George H.W. Bush is surrounded by a sea of U.S. military personnel as he greets troops following an arrival ceremony in the eastern Saudi Arabian city of Dhahran November 22, 1990. Bush celebrates Thanksgiving Day with U.S. troops from all branches of the military deployed here after the Iraqi invasion of Kuwait. Photo By Terry Bochatey/Reuters

That hesitation allowed Saddam to regain the upper hand against insurgents and caused a refugee crisis in Iraq’s northern Kurdish region. The dictator tauntingly installed a tile mosaic of a scowling likeness of the president at the door of Baghdad’s al-Rashid Hotel, which forced entering foreign dignitaries to often step on his face just above its “Bush is criminal” caption.

Some Iraqis still blame Bush for not removing Saddam at the time. “Then, the U.S. threw a lifebuoy to Saddam, allowing him to muster strength and to oppress Iraqis for the next 12 years,” said Mohamed Zaid, a 35-year-old bookstore owner.

Even Iran, which hated Saddam for starting their 1980s war, remained suspicious of Bush despite his pledge of “good will begets good will.” Iran leaned on Lebanon’s Shiite militants to help win the release American hostages like Terry Anderson of The Associated Press, but relations went no further. One of Bush’s last acts as president, pardoning former Defense Secretary Caspar Weinberger and others for their role in the Iran-Contra scandal, an offshoot of that hostage crisis.

Still, Bush’s decisions in the 1991 war and its aftermath echo even now. The Kurdish crisis gave birth to the U.S.-imposed no-fly zone in northern Iraq that allowed the Kurds to flourish into the semi-autonomous region now demanding independence.

“The freedom that we enjoy here in Kurdistan, it is because of him really,” said Sherwan Mohammed Abdullah, a 46-year-old Kurdish former soldier. “Even when he launched the strike on Kuwait … not a single soldier in my battalion was injured.”

Defense agreements with Gulf nations then grew into a series of major military installations across the region. And the presence of American troops in Saudi Arabia, home to the Muslim world’s holiest sites, served as a chief complaint of al-Qaida leader Osama bin Laden ahead of the Sept. 11, 2001, terror attacks.

His son would launch the 2003 invasion of Iraq after 9/11 and become so hated in the Arab world an Iraq journalist would even throw a shoe at him during a news conference. But the elder Bush remained beloved, perhaps nowhere more than Kuwait, where Americans even today can get hugged while walking down the street. A group of Kuwaiti officials including the country’s National Assembly speaker met with the former president in October 2017 to wish him well.

The former president’s Kuwaiti namesake Bush al-Widhan ended up working in the country’s National Guard. His name fascinated others.

“I went with my father to Cleveland, Ohio … and the passport control clerk asked me about the name,” al-Widhan recounted. “I couldn’t tell him the story. My English is bad. I said: ‘George Bush, George Bush. Kuwait war.’ Everyone thought it was a great name.”