2020 race brings free college back to the national stage

After receding from the national stage, the free college movement is resurfacing as a central rallying point for Democrats as they set their sights on the White House.

At least 18 of the party’s 23 presidential contenders have come out in support of some version of free college. Sen. Elizabeth Warren of Massachusetts promises free tuition at public colleges and universities. Sen. Amy Klobuchar of Minnesota says it should be limited to two years of community college. Sen. Kirsten Gillibrand of New York wants to provide free tuition in exchange for public service.

The candidates are responding to what some say is a crisis in college affordability, an issue likely to draw attention in the first primary debates later this month. Year after year, colleges say they have to raise tuition to offset state funding cuts. Students have shouldered the cost by taking out loans, pushing the country’s student debt to nearly $1.6 trillion this year. Even for many in the middle class, experts say, college is increasingly moving out of reach.

“Something like 1 in 5 voters has college debt, which is a huge percentage. And when you have a huge number of people affected by something, then that certainly gets people’s attention.”

Free college, a catchall term for a range of affordability plans, is increasingly seen as a solution. Nearly 20 states now promise some version of free college, from Tennessee’s free community college program to New York’s Excelsior Scholarship, which offers up to four years of free tuition at state schools for residents with family incomes below $125,000 a year.

But research on the effectiveness of state programs has been mixed. Critics say the offers are often undermined by limited funding and come with narrow eligibility rules that exclude many students.

“This is a problem that has not gone away but has gotten worse in many communities,” said Mark Huelsman, associate director of policy and research for Demos, a liberal think tank. “It’s enough of a problem that people expect some action on it, and they expect some plan for how to get there.”

Plans from Warren, Vermont Sen. Bernie Sanders and former Obama housing chief Julian Castro aim to eliminate tuition at all public institutions. The candidates say that would open college to a wider group of Americans and greatly reduce the need for loans. Warren argues that college, like other levels of schooling, is “a basic public good that should be available to everyone with free tuition and zero debt at graduation.”

Others, including Klobuchar and former Vice President Joe Biden, have backed more moderate plans to provide two years of free tuition at community colleges, similar to an idea pushed by President Barack Obama in 2015.

And there are some who say students should be able to graduate without debt. To do that, several candidates want to help students with tuition as well as textbooks and living costs. Such “debt-free” plans, which aim to steer money toward students with lower incomes, are supported Sen. Kamala Harris of California and Pete Buttigieg, the mayor of South Bend, Indiana, among others. 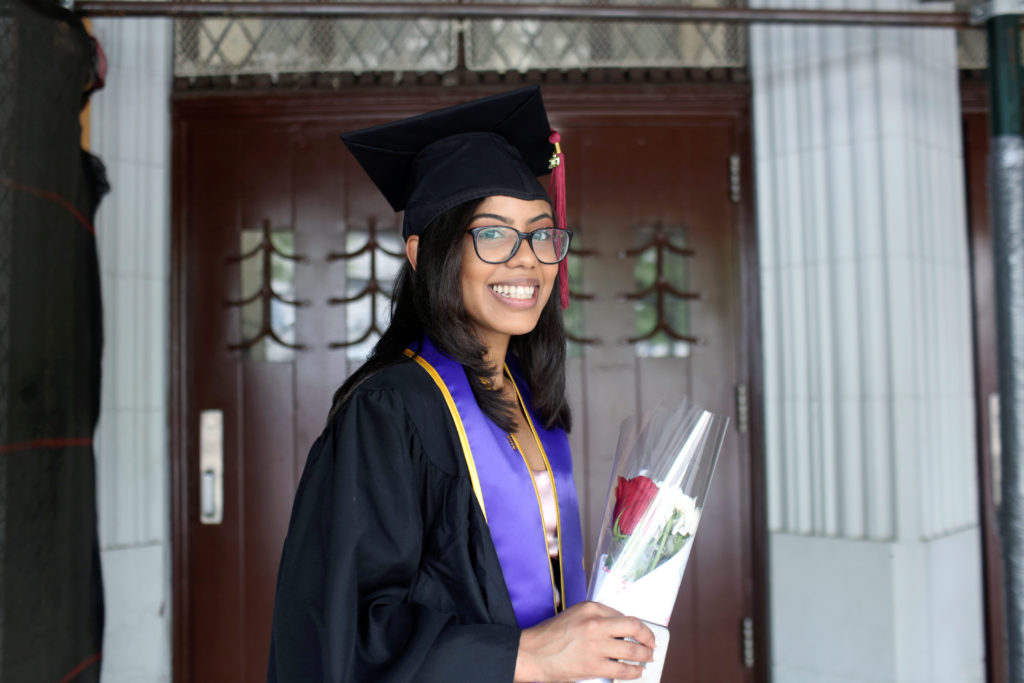 Esmerin Valerio, 22, a graduate in business administration and management from The City College of New York on May 31. When asked about the issues she is most concerned about leading up to the 2020 election, she said, “I guess I would like free tuition for low income students.” Photo by Gabriela Bhaskar/Reuters

Proposals for free college nationwide started to gain popularity among Democrats during the Obama administration and in the 2016 primary race. That discussion stalled after the election of President Donald Trump, who is seen as hostile to the idea. His administration blames colleges for the debt crisis, saying they ramp up tuition because they know students have easy access to federal loans.

Before Trump was elected, Sanders was credited with bringing the issue to the fore when he campaigned on a promise to make tuition free at public colleges. Hillary Clinton, the party’s 2016 nominee, initially criticized the idea but later adopted a similar plan. Now, early in the 2020 race, Democrats have been quick to show their support. Instead of debating whether it should be free, most are weighing which model is best and how to achieve it.

“It’s striking how much the debate has shifted over the past decade,” Huelsman said. “If you look at the 2008 election, 2012, it was not something that was necessarily a prominent part of the debate.”

For most candidates, free college is just part of the solution as they confront student debt and college access. Several also promise to help borrowers refinance loans at lower interest rates; some want to wipe away huge chunks of the nation’s student debt.

Those types of proposals are likely to be popular among the growing share of voters paying off student loans, said Douglas Harris, an economics professor at Tulane University who has studied the effectiveness of free college.

“Something like 1 in 5 voters has college debt, which is a huge percentage,” he said. “And when you have a huge number of people affected by something, then that certainly gets people’s attention.”

One of the major sticking points over free college is the price. Warren’s total education plan is estimated to cost $1.25 trillion over a decade. Sanders’ free college plan would cost $47 billion a year. Both call on the federal government to split the cost with states while also raising taxes on Wall Street or the wealthiest Americans.

Some Democrats, though, say that kind of spending is untenable. Klobuchar has rejected the idea of free college for everyone, saying the country can’t afford it. Instead she backs two years of free community college as a way to help prepare workers and fill shortages in the job market.

“When I look at the jobs that are available right now out there, we have a lot of job openings in areas that could use a one-year degree, a two-year degree, and we’re just not filling those jobs,” Klobuchar said at a March town hall in Iowa. She added that students can attend community college and then “later go on to complete their four-year degree.”

Former Texas Rep. Beto O’Rourke supports free community college for all Americans, along with debt-free college at four-year institutions for students with low and modest incomes. Former Colorado Gov. John Hickenlooper says he would make community college free “for those who can’t afford it.”

Many free college supporters see promise in a federal plan that could bring more funding and share the cost with states. But in Congress, that kind of plan has yet to take hold.

In March, Sen. Brian Schatz, D-Hawaii, reintroduced his Debt-Free College Act, which calls for a partnership with states to make sure students can afford all college costs without borrowing loans. The idea died in the previous session and has yet to be taken up in this one, but the new bill has gained wider support from Democrats.

Among those backing the plan are four 2020 candidates: Gillibrand, Harris, Warren and Sen. Cory Booker of New Jersey.

Left: Benjamin Philip, 23, an engineering graduate at The City College of New York with his family at his May 31 commencement ceremony in Manhattan. "If tuition could be free, that would be best," he said when asked about student debt. "I feel like I will be able to pay back my loans with my new job." Photo by Gabriela Bhaskar/Reuters