If there was any doubt that Sen. Bernie Sanders’ rivals see him as their main threat, it was erased at the debate Tuesday night in Charleston, South Carolina. Sanders, who was center stage, faced the most direct attacks of any candidate, reflecting his status as the frontrunner in the 2020 Democratic primary race.

The debate came just four days before the South Carolina primary, where former Vice President Joe Biden is ahead in the polls, as he seeks his first victory of the 2020 primaries. It was also the last debate before Super Tuesday on March 3, when more than 40 percent of the delegates in the Democratic nominating process will be awarded.

Here are key takeaways from the debate.

The attacks against Sanders started almost immediately. Sen. Elizabeth Warren kicked it off, by drawing arguably the sharpest contrast to date between herself and Sanders.

“Bernie and I agree on a lot of things, but I think I would make a better president than Bernie,” Warren said, adding that the country needed a leader who “can get something done.”

Under attack from all sides, Sanders didn’t give ground. He defended his support for gun control legislation and his health care proposal — though he dodged a question on providing more details about how he plans to pay for it. On the electability issue, Sanders cited polls showing he would beat President Donald Trump in key battleground states.

All the attacks may end up having the opposite effect — they are seemingly cementing Sanders’ status as the unquestioned frontrunner. And they give Sanders’ passionate base fodder to argue that the Democratic establishment is conspiring to do anything possible to deny Sanders the nomination. 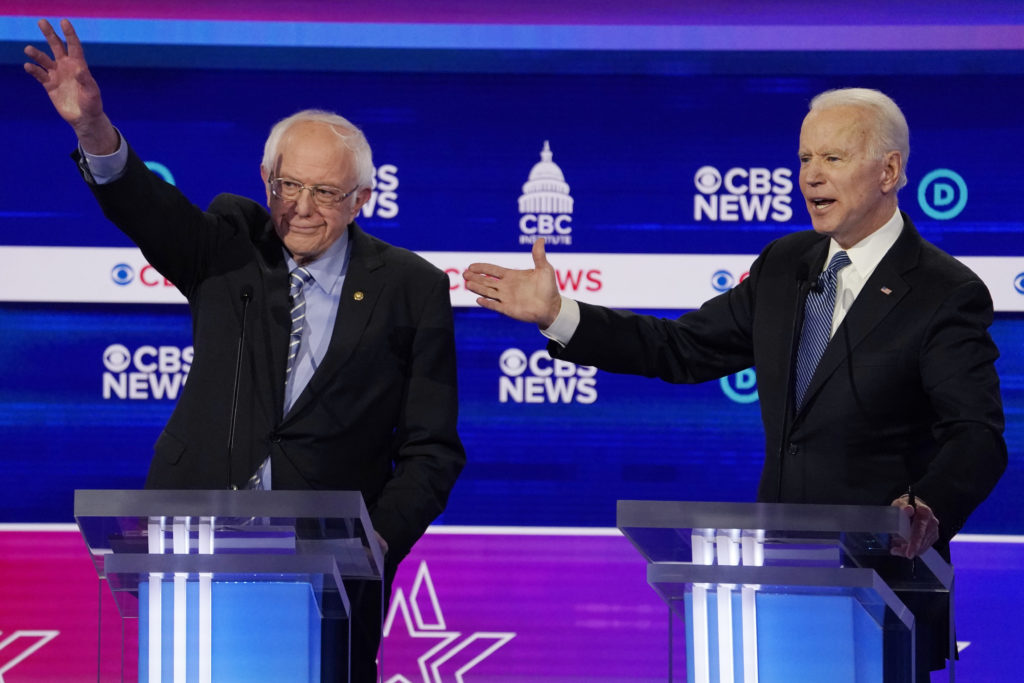 Biden didn’t need a standout performance Tuesday to maintain his frontrunner status in South Carolina. He just had to avoid mistakes that would push skeptical voters to other candidates, and that’s largely what he did. It wasn’t a perfect debate for Biden — none have been so far this cycle — but it was likely good enough.

Biden made several direct appeals to African-American voters, citing his record as a senator and vice president working on civil rights issues. He didn’t dwell on the fact that Sanders has overtaken him in some national polls, or that he still hasn’t won a nominating contest so far in 2020. He also didn’t wade into several shouting matches between other candidates that made the debate difficult to watch at points.

If Biden follows his debate performance with a victory Saturday, it could revive his campaign. At the very least, a win would prove Biden remains the top choice of black voters– a key voting bloc as the Democratic primaries shift to more diverse states on Super Tuesday. But a loss could be devastating, especially because Biden predicted a victory in The Palmetto State Tuesday night.

Bloomberg needed a big night. He didn’t have one.

The billionaire former mayor of New York delivered a poor performance in his first debate last week. On Tuesday, Bloomberg needed a much stronger showing, but he fell short.

Once again, Bloomberg faced attacks from Sanders and Warren over his vast wealth and past political donations. Bloomberg appeared better prepared than he was in Las Vegas. But, he still stumbled when defending his support for House Democrats in the 2018 midterms. In noting that he spent $100 million to help Democrats win back the House, Bloomberg started to say he “bought” the candidates, before correcting himself mid-sentence.

The gaffe reinforced his rivals’ chief criticism — that Bloomberg bought his way into the 2020 race. Bloomberg has a track record to run on as the former mayor of the country’s largest city — a record that includes notable achievements in the areas of public health and environmental protection. (It also includes controversial policies like stop and frisk for which Bloomberg has faced significant criticism.) But so far, Bloomberg’s rivals have successfully defined him as an out-of-touch billionaire.

Will this be the last crowded debate stage of 2020?

The next debate will take place in three weeks, on March 15. By then, South Carolina and Super Tuesday will be in the rearview mirror.

Especially after Super Tuesday, all but the top few candidates will be under enormous pressure to drop out of the race. Warren could face calls from the left to clear the way for Sanders. If they falter on Super Tuesday, Klobuchar and Buttigieg could face calls to drop out and throw their support behind Biden or Bloomberg, who has risen to third in national polls despite joining the 2020 race later than his fellow candidates.

No matter what, the field will likely shrink, making the South Carolina debate the last one of the primary season that featured multiple progressive and moderate candidates.

The remaining debates will give candidates more time to delve into policy plans (and attack one another). They will also likely be dominated even more by white men, offering voters a pointed reminder of how much the race has shifted since a diverse slate of Democrats — including several non-white and female candidates — squared off in the first primary debates in Miami last June.