5 numbers to watch on family separations

The Trump administration’s “zero tolerance” policy has been marked by confusion: conflicting statements about the policy’s goals, few details on the separated children held in detention and no clear data on how many remain separated.

The Department of Health and Human Services confirmed that child separations have stopped. “We are not receiving any more referrals as a result of the zero tolerance policy,” an HHS spokesman said in an email to the PBS NewsHour.

This comes more than two weeks after President Donald Trump signed an executive order that ends family separations, but still requires criminal prosecution for illegal entry. The Trump administration said it will detain families together for the duration of their immigration proceedings. Meanwhile, more than 2,000 children are still believed to be separated from their families, among more than 11,000 children who are under HHS’ care.

READ MORE: ‘My son is not the same’: New testimony paints bleak picture of family separation

HHS Secretary Alex Azar, echoing the sentiments of other agencies heads involved in the process, blamed the country’s existing laws and disputed the notion that the “zero tolerance” policy’s rollout has led to confusion stemming from its implementation.

“Any confusion is due to a broken immigration system and court orders,” Azar told reporters on a July phone call. “It’s not here.”

Numbers matter, and here are a few that you should know about. We will update this post as the numbers change.

The number of children that have been received by the HHS’ Office of Refugee Resettlement division.

For now, this is one of the numbers HHS and other agencies are providing in response to requests to better understand how many children have been separated under the “zero tolerance” policy. This number includes all children in the agency’s care, both those who were separated and those who arrived unaccompanied.

An important note: All minors referred to the Office of Refugee Resettlement, including those separated under the Trump policy, are classified as “unaccompanied alien children.”

The number of children separated from their parents under the Trump administration’s “zero tolerance” policy.

Earlier this month, HHS head Alex Azar told reporters on a media call that the latest estimate of children believed to have been separated at the border is “under 3,000.”

Azar said that the “under 3,000” estimate is a “maximum” figure that could include children who were separated from their parents before they arrived at the border. The secretary said officials are reviewing the thousands of case files to get a better understanding of exactly how many children were separated by DHS officials and then transferred into HHS’ care.

This comes nine days after Azar told reporters that 2,047 children had been separated from their parents and remained under the agency’s care.

That was six down from the number provided June 20 when HHS reported 2,053 separated minors in its custody. That was also the last time immigration officials provided a specific break-out number, and based on recent subsequent correspondence with the agency, it appears to no longer be providing this number.

Initially, DHS officials also said that between May 5 and June 9, a total 2,342 children were separated from their parents.

Of the “under 3,000” children separated from their parents, 2,551 are between ages 5 and 17, according to the latest court update from the federal government.

The government has until July 26 to reunite all eligible minors with their parents. As of July 19, the Trump administration said it has reunited 364 from this group, according to its court filing.

Bob Carey, the former director of the HHS Office of Refugee Resettlement, the division currently caring for the children, joins Amna Nawaz to discuss the logistical challenges of reunification.

The government has been under court mandate to provide regular updates on the reunification process for the thousands of separated minors under U.S. custody. Among the other numbers provided to a federal judge on July 19:

At least 1,606 parents may be deemed eligible for reunification with their children:

The U.S. has identified 908 adults that are either ineligible for reunification or their eligibility status is not yet known:

The court update on Friday also said 719 of the parents face a “final order of removal.”

In a July 24 update, the federal government said 463 migrant parents are no longer in the U.S. The filing said these individuals’ cases were “under review” because they may have been deported without their children. This, the government argued, could hinder efforts to reunite separated minors with this group of parents by Thursday’s deadline.

The government may provide more information in another hearing Tuesday.

Of the “under 3,000” children separated from their parents, 103 are under age 5, according to the latest numbers in a multi-agency statement from the federal government.

Of the 103 children eligible for reunification, 57 have been reunited with their parents, while the other 46 remain separated. The government said this is because 22 children were ineligible for reunification because of “safety concerns posed by the adults in question.” The Justice Department said some of the adults had charges or convictions for child cruelty, kidnapping and murder, among other reasons. Another 24 children are also not eligible due to the parents’ circumstances; this could be because the parents have already been deported or are in custody for unspecified “other offenses.”

Late Wednesday, HHS provided a quick update on the reunification status: “We anticipate that, as of the early morning on July 12, we will have reunified all children under age 5 who are eligible under the court order for reunification with parents in the United States.” The government provided a more detailed breakdown of the children Thursday morning.

The American Civil Liberties Union, who brought the original lawsuit that led to the current deadlines, responded to the government’s latest update, saying the administration failed to reunite the dozens of eligible children by the July 10 deadline.

“If in fact 57 children have been reunited because of the lawsuit, we could not be more happy for those families,” Lee Gelernt, deputy director of the ACLU’s Immigrants’ Rights Project, said in a statement. “But make no mistake about it: the government missed the deadline even for these 57 children. Accordingly, by the end of the day we will decide what remedies to recommend to the court for the non-compliance.”

The court deadline for the government to provide a list of separated children between the ages of 5 and 17 was today. That list has not been submitted. The judge said in a meeting with both parties on Friday that the government must provide a list that includes the names, ages and locations of all children and adults that fall within that category by 9 a.m. PT Monday.

The court also ordered the government to provide the ACLU with the time, day and location of each family’s reunification at least 12 hours before it occurs.

This is the number of U.S. Border Patrol arrests for the month of June.

The U.S. Border Patrol released the latest arrest numbers, showing that agents made 42,565 arrests of people crossing at the U.S.-Mexico border during the month of June. This number also includes those defined as “inadmissibles”: people without prior authorization to enter who present themselves at ports of entry, including asylum seekers.

Border Patrol uses the term “apprehensions” to describe those who illegally cross the border between ports of entry.

The data shows a drop in arrests at the border, after a trend of increases across the last three months or more. The official CBP numbers are released on a monthly basis. 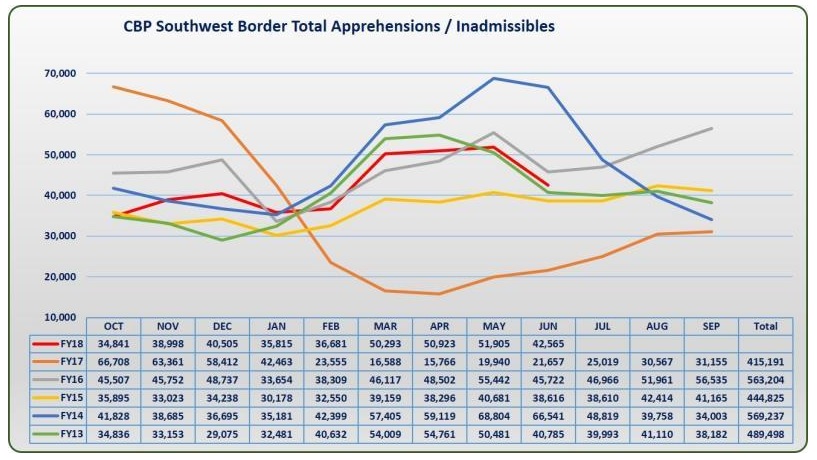 The latest, official numbers on border apprehensions. The red line is for fiscal year 2018. Image by U.S. Customs and Border Protection

The drop in arrests could indicate that “zero tolerance” is acting as a deterrent. But other factors could be responsible too. For example, extreme weather patterns have been known to slow the number of people illegally crossing into the U.S.

Michelle Mittelstadt of the Migration Policy Institute argued for taking a long view when looking at immigration data.

“On a topline level … one can use numbers to basically make any argument,” Mittelstadt said. “It’s important, if you want to get an accurate picture of what’s happening at the border, to not just do a comparison of one month to the prior month or one month to the same month a year earlier.”

Border apprehensions for fiscal year 2017 followed a downward trend of lower-than-average arrests since 2007.

The Trump administration has pointed to the numbers of border arrests when defending its policies. During his first month in office, Trump said there was a 40 percent decline in illegal immigration. Some experts attributed that decline to winter weather.

But as months went on, border arrests began to increase. By 2018, the number of illegal crossings inched closer to the levels seen in May 2014 when more than 68,000 arrests were made, amid the surge of Central American families and children showing up at the border.

The peak year for apprehensions at the southwest border, however, was the year 2000 when there were more than 1.6 million apprehensions, Mittelstadt said. These numbers, too, predated the official use of “inadmissibles” in CBP data.

Left: A woman holds a child's hand as undocumented immigrant families are released from detention at a bus depot in McAllen, Texas. Photo by Loren Elliott/Reuters