In the past week, Immigration and Customs Enforcement has become the target of a growing number of Democrats in Congress who are unhappy with the Trump administration’s immigration priorities — especially its separation of families at the border. 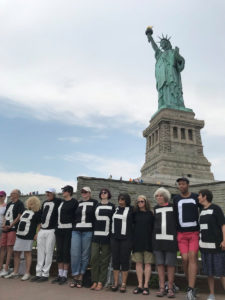 The group Rise and Resist stage a protest at the Statue of Liberty in New York, U.S. July 4, 2018 in this picture obtained from social media. Rise and Resist/via REUTERS

Progressive activists have been calling to abolish ICE for months, and this week, one protester was arrested after climbing the base of the Statue of Liberty on the Fourth of July. These activists have recently been joined by Democratic Sens. Elizabeth Warren of Massachusetts and Kirsten Gillibrand of New York, along with Alexandria Ocasio-Cortez, the Democratic socialist who defeated Democratic Caucus Chair Rep. Joe Crowley in a primary race last week, using the dismantling of ICE as a major part of her platform.

“I believe you should get rid of [ICE], start over, reimagine it and build something that actually works,” Gillibrand told CNN.

Trump has criticized this idea several times on Twitter, offering his support for the agency established in 2003 and accusing Democrats who support the efforts as wanting “open borders.”

“Every day, the brave men and women of ICE are liberating communities from savage gangs like MS-13,” Trump wrote on Thursday. “We will NOT stand for these vile Democrat smears in law enforcement. We will always stand proudly with the BRAVE HEROES of ICE and BORDER PATROL!”

While some senators have called for re-examining ICE, calls to dismantle the agency have so far been led by a small but vocal group of progressive activists and lawmakers.

The White House formally ended the practice of separating families at the border last month, and now faces court-ordered deadlines to reunite them. It has said any effort to dismantle ICE would “grind immigration enforcement to a halt, with devastating consequences for public safety.” According to data released by the White House, ICE agents arrested more than 127,000 undocumented immigrants with criminal convictions or charges in 2017, including more than 78,000 drug offenses and 1,800 homicides.

“In this White House, let me be clear, we are with you 100 percent,” Pence said. “These spurious attacks on ICE by our political leaders must stop.”

While some senators have called for re-examining ICE, calls to dismantle the agency have so far been led by a small but vocal group of progressive activists and lawmakers. To understand the current fight over ICE, here’s what we know about the agency’s history, its role under Trump and what’s next.

How was ICE created? 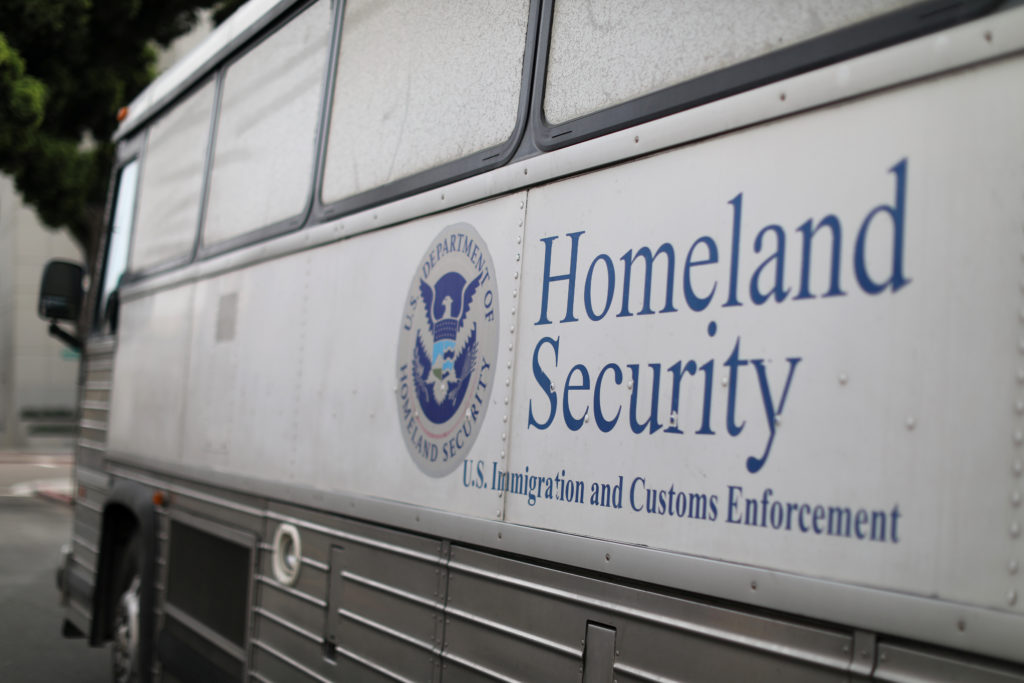 Immigration became a federal responsibility and priority in the late 1800s and was formalized as a division of the Treasury Department in 1891.

In the more than 100 years since, immigration has been shuffled among several federal agencies, including the Commerce, Labor and Justice Departments, before landing in the newly-created department of Homeland Security in the years after the Sept. 11 terror attacks.

“Whatever federal government agency handles immigration is a great window into how we think about immigration and its role in the United States,” said Erika Lee, the director of the Immigration History Research Center at University of Minnesota.

The most recent home inside DHS signals a decades-long “shift in America as nation of immigrants and thinking about immigration as a good to immigration as a national security threat,” she added.

While Lee says it may seem like there’s a newfound outsized fear of immigrants, she sees echoes of the nation’s complicated history and response to outsiders, one that stretches back more than a century to the Chinese Exclusion Act of 1882 and the backlash against Irish Catholics in the mid-1800s.

The current Immigration and Customs Enforcement was one of three agencies established in 2003 from what used to be the Immigration and Naturalization Service (INS). ICE’s mandate is to enforce approximately 400 federal immigration and labor-related statutes, primarily in the nation’s interior, and work to remove people for immigration violations. One duty includes monitoring businesses for undocumented workers, but patrolling the border itself is left to Customs and Border Protection, another agency formed in the 2003 shakeup.

ICE and immigration under Trump

Since Trump took office, historians like Deborah Kang, a professor at California State University San Marco and author of “The INS on the Line: Making Immigration Law on the US-Mexico Border,” have seen a wholesale shift in ICE’s priorities.

The current ICE policy stems from the Illegal Immigration Reform and Immigrant Responsibility Act, a 1996 law signed by then-President Bill Clinton. It says immigrants can be deported for committing any crime, including misdemeanors. The country’s network of 200 ICE detention centers began to pop up in the years after Sept. 11, when there was a surge of funding for immigration enforcement. That funding has more than doubled since 2005, according to the Center for Migration Studies. The average daily population of immigrant detainees has also surged since the 1996 law was enacted, from around 9,000 a day in 1996 to more than 38,000 a day in 2017, according to CMS.

She points to Trump’s election as something that “really opened up language that people were sitting on, holding onto, not willing to put out there publicly,” Gottlieb said. “Trump made it okay to suddenly talk about an invasion and talk about immigrants as criminals.”

“I can’t name a single thing that ICE has done to protect public safety in our community. Not a single thing.” – Amy Gottlieb, immigration lawyer and activist

Following a wire fraud conviction in 2006, Ragbir served two and a half years in ICE detention facilities. In the years since, he continued to appear at regular check-in meetings with immigration agents. Despite his criminal conviction and the 1996 law that could have been used to deport him to Trinidad and Tobago, Ragbir never faced a serious deportation threat because of the Obama administration policy of prosecutorial discretion.

That all changed during his most recent appointment in January.

“They arrested him in front of my eyes. They handcuffed him and they flew him that very day to Miami trying to deport him,” Gottlieb said. “To me that was an incident of state-sponsored violence. I will not ever forget that moment.”

Ragbir was held in custody for 11 days before a court ordered his release. Gottlieb says in the nearly six months since Ragbir’s detention she and her husband live “one day at a time.”

It’s experiences like Ragbir’s and increased ICE enforcement in recent months that Kang says has “created the kind of opposition you’re seeing to ICE right now.”

Gottlieb and Ragbir are two of the many activists who are calling on the government to abolish ICE.

“I can’t name a single thing that ICE has done to protect public safety in our community. Not a single thing,” Gottlieb said. “You can’t fix an agency that is so broken and has so much power.”

The idea of abolishing ICE has so far only attracted limited support from some Democrats in Congress. Rep. Mark Pocan, D-Wis., already introduced a bill to abolish ICE, and Washington Democratic Reps. Adam Smith and Pramila Jayapal are working on another. But any attempt to phase out ICE is likely face strong opposition in the Republican-controlled House and Senate.

Supporters of the agency, like former acting ICE director Thomas Homan, who retired at the end of last month after 30 years in immigration enforcement, say ICE agents are simply doing their job as prescribed by the law.

“The system needs to be fixed. I’m the first one to agree to that,” Homan told PBS NewsHour anchor Judy Woodruff in May. “If the law doesn’t work, then fix the law. Don’t ask the law enforcement officer to ignore it. No one asks the FBI to ignore their job. No one asks the DEA to do their job. We’re no different.”

People like Sen. Angus King, I-Maine, have hesitated to call for abolishing the agency altogether, though they have encouraged Congress to re-examine it.

“I don’t know how you abolish an agency without abolishing the function, and I think the function is necessary,” he said Sunday on NBC’s “Meet The Press.” But he also said it makes a “hell of a lot of sense” to take a close look at how they’re carrying out enforcement, adding, “there are a lot of questions to be answered.”

Some type of action — whether legislatively or in the courts — could become more likely if protests grow louder, Kang said.

“What we’ve seen in the past is that when people protest and protest enough, there actually is change,” Kang said. “These protests do have an impact in helping to raising awareness of problems with our immigration bureaucracy and achieving some degree of reforms. These reforms are limited, but sometimes reforms can happen.”

Still, Kang notes, “just getting rid of ICE isn’t going to solve the problem.” Congress would likely just shift responsibility for interior immigration enforcement to other agencies inside the Department of Homeland Security, like Customs and Border Protection.

Instead, Lee says 21st century questions about “balancing national security and economic prosperity” require a comprehensive analysis of immigration in the United States.

“The calls for abolishing ICE is part of a much larger reimagining of our country’s relationship with immigration,” she said, the latest iteration of an immigration struggle the federal government has wrestled with for more than 100 years.

Left: An immigration activist holds up a sign calling for the abolishment of ICE, U.S. Immigration and Customs Enforcement, during a June rally to protest the Trump Administration's immigration policy outside the Department of Justice in Washington, D.C. Photo by Joshua Roberts/Reuters