5 takeaways from the first 2020 Democratic debate night in Detroit

Democrats sparred in a fast-moving, substantive and vigorous debate in Detroit on Tuesday, displaying a field of candidates who almost across the board seemed more confident and better prepared than a month ago.

This first of the two Detroit debates featured the two liberal frontrunners, Sens. Bernie Sanders of Vermont and Elizabeth Warren of Massachusetts, flanked by eight opponents, including many of the field’s more moderate candidates.

Heading into Tuesday night, one of the main questions was whether Sanders and Warren would take aim at each other. The senators were the top-polling candidates on the stage, and are widely seen as competing for the Democratic Party’s progressive base. But both candidates refused to criticize one another.

Later on, Sen. Amy Klobuchar of Minnesota was asked to say which of her rivals on the stage were making promises just to get elected. Klobuchar refused to single anyone out. “Everyone wants to get elected,” she said.

It was a theme throughout the night: Democrats sparred on policy, but avoided making the kind of personal attacks that dominated the 2016 Republican primary debates. The Democrats who appeared Tuesday also avoided criticizing the candidates who will appear on the debate stage Wednesday night. Former Vice President Joe Biden, who has consistently led the 2020 Democratic field in polling, was not mentioned once. Neither was Sen. Kamala Harris of California, another top-tier White House contender.

But that collegiality will only last so long. Fewer candidates are likely to qualify for the next round of debates in September. Those debates will be smaller, with more marquee matchups between candidates — like Biden and Warren — who haven’t been on the same debate stage yet. Depending on how Wednesday goes, the debates this week in Detroit may be the high-water mark for unity in the Democratic primaries. 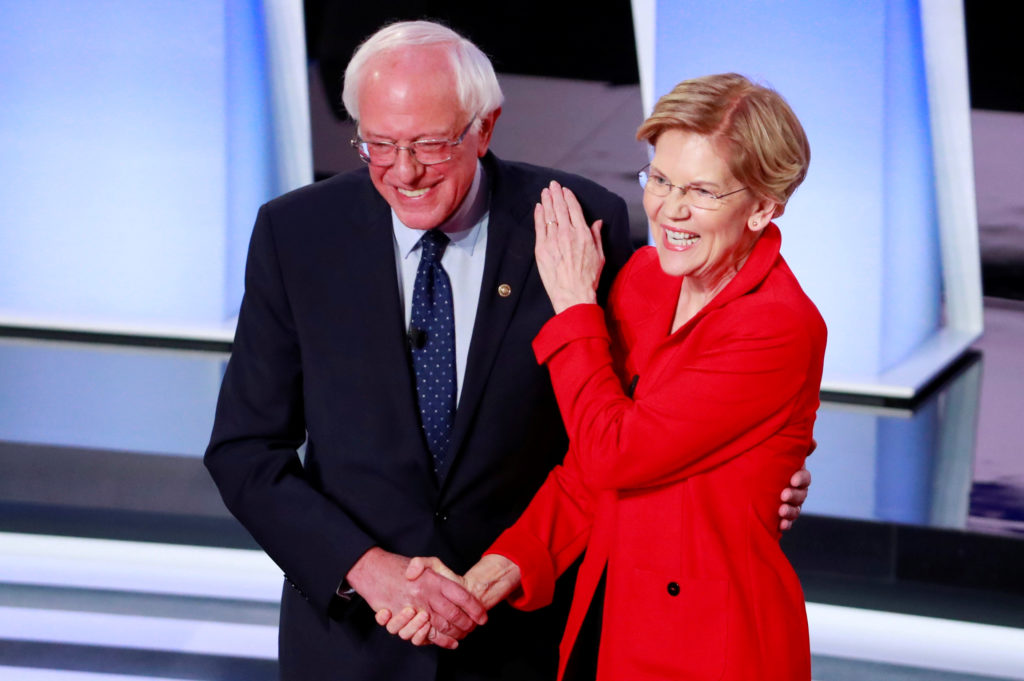 Sens. Bernie Sanders and Elizabeth Warren shake hands before the start of the first night of the second 2020 Democratic U.S. presidential debate in Detroit. REUTERS/Lucas Jackson

From the first moments of the debate, when Warren walked onto the stage with a confident stride and greeted her opponents, she commanded attention. And time.

Those keeping count showed Warren spoke more than any other candidate throughout the debate. When specific questions didn’t come her way, the former law school professor jumped in to interrupt and make her own points, which were generally clear, succinct and landed with rhythm.

In the middle of a complicated and confusing interparty argument, she was a voice reminding the other candidates who they were. “We are the Democrats,” she said. “We are not about taking health care away from anyone and should stop using Republican talking points.”

She also knew how to pivot.

In the moment when she was asked about calling herself a“capitalist,” Warren instead dropped in her message: “It is my way of saying I know how to fight and win,” she replied.

Democrats are still deeply unsure about how to win

The heat of the debate — in both philosophy and policy — hovered around the Democrats’ largest question: How do they win in 2020?

Is it by being pragmatic and talking to the middle of the country, as Klobuchar, Ohio Rep. Tim Ryan and former Maryland Rep. John Delaney argued? Or is it by pushing for bold, new ideas that would appeal to the left and dramatically reshape how government works, as Sanders and Warren have pushed? 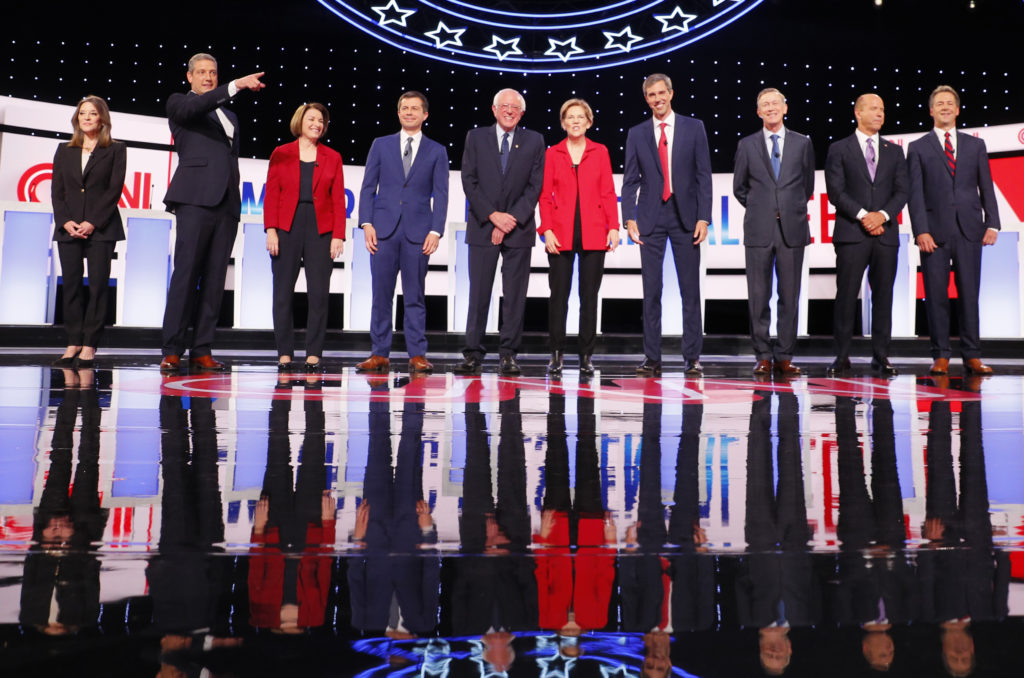 The 2020 Democrats on the debate stage in Detroit on Tuesday largely refrained from criticizing each other. Photo by REUTERS/Rebecca Cook

“I’m tired of Democrats being afraid of big ideas,” Sanders told the audience at one point.

“What I don’t like about this (debate),” Klobuchar continued, “is we are talking more about winning an argument than winning an election.”

But to the candidates of change on the stage, Warren included, winning the election is contingent on big, imaginative proposals.

After Delaney argued for less-sweeping government intervention, Warren delivered one of the more stinging rebukes of the night.

“I don’t understand why anybody goes to all the trouble of running for president of the United States just to talk about what we really can’t do and shouldn’t fight for,” she said.

FACT CHECK: The first night of the 2020 Democratic debates in Detroit

But there was no clear winner between a steer-steady strategy versus a go-big agenda.

On climate change, one of the issues that inspired some friction, South Bend Mayor Pete Buttigieg attempted a note of unity, saying that the candidates “have all put out highly similar visions,” but that Democrats will have the chance to address the problem “if and only if we beat Donald Trump.”

The first 45 minutes of the debate were devoted to health care policy, significantly more time than any other issue. The details were largely lost in a flood of plans and counter-plans, making it difficult to parse the specific differences between each candidate’s position on the issue. Still, it was a substantive conversation that underscored the political divide in the Democratic Party.

The Democrats on the stage sorted themselves into two groups: candidates who support a government-run health care system and those who don’t want to go that far.

On the left, Sanders was unapologetic in defending his progressive views. “No one can defend the dysfunctionality of the current system,” he said at one point. Warren was equally forceful, though she tried to distance herself from criticism that a government-run system would reduce consumer choice. 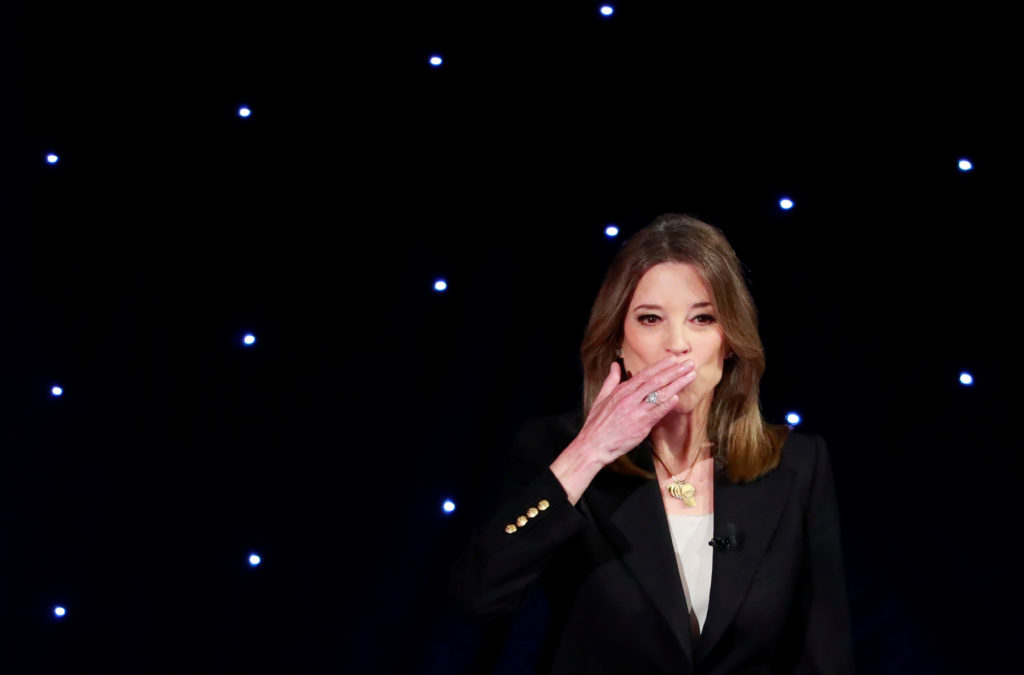 2020 candidate and author Marianne Williamson drew praise for her debate performance. But lower-polling candidates like Williamson still struggled to stand out Tuesday. Photo by REUTERS/Lucas Jackson

Several more moderate candidates, such as Klobuchar, came out in favor of building on the Affordable Care Act. Adding a public option is “the easiest way to move forward quickly,” Klobuchar said.

The divide isn’t new. What’s striking, at this point, is the fact that it appears to be irreconcilable. The Democratic candidates aren’t any closer to settling on a solution than they were when the primary season began — despite polls that show a majority of Americans do not support government-run health care if it means losing their private insurance options.

The lingering indecision has opened the door for President Donald Trump and Republicans to step in and define the Democrats’ plan as a socalist government takeover. If that narrative sticks, it could make it hard for the eventual Democratic nominee — whoever it is — to win over moderate voters in the general election.

Others had strong moments

Sanders led many of the night’s policy debates and fired off a number of audience-pleasing lines, including about slashing the cost of health care. He touted polls that have shown him beating Trump in a head-to-head matchup (though Ryan was quick to make the point that polls also showed Hillary Clinton beating Trump in 2016) .

The senator from Vermont had one of the most memorable retorts of the night, responding to an attack from Ryan, who questioned whether Sanders’ health care plan delivered its promises. “I wrote the damn bill!” Sanders said.

Standing a few feet away, Buttigieg also repeatedly quieted the stage, calling for new leadership and pointing to what he saw as repeated cycles of political rhetoric.

As the field discussed how to tackle mass shootings, he responded: “This is the exact conversation I’ve had since I was in high school. We have now produced the second school-shooting generation in this country. Something is broken.”

READ MORE: In 2020, Democrats say they’ll negotiate on values as long as they beat Trump

Montana Gov. Steve Bullock made his debut on the debate stage with a message tailored to moderate voters. And Ryan made a strong case that he understands the overlooked portion of middle America that Trump captured in 2016.

“America is great,” he told the audience in his first words of the debate, ”but not everyone can access America’s greatness.”

That was a theme for author Marianne Williamson as well. She repeatedly decried what she sees as corporate corruption and influence on society, and she gave a pounding statement about potential reparations to African Americans. When asked about her plan to give “financial assistance” as a reparation, Williamson corrected the moderator, saying it is not “assistance” but “a payment of a debt that is owed.” She continued on, saying, “it is time to realize this country will not heal until we recognize the economic gap between blacks and whites … comes from a great injustice we’ve never dealt with.”