In 2020, Democrats say they’ll negotiate on values as long as they beat Trump

Left-leaning voters say it’s more important to take back the White House in 2020 than to nominate a Democratic candidate who represents their values, according to a new poll from the PBS NewsHour, NPR and Marist.

Among voters likely to back a Democrat, 54 percent said they want a Democratic candidate who can beat President Donald Trump in the 2020 presidential election. In contrast, 42 percent of respondents said they want Democrats to pick a nominee whose values most reflect their own.

“Democrats want to beat Trump. That’s the goal, and they’re looking for the best candidate to do that.”

On July 30 and 31, 20 eligible Democratic presidential candidates will enter the next series of debates, a chance for them to give voters a better glimpse of what kinds of policies they’d prioritize as president. The poll did not ask people which Democratic presidential candidate they preferred, and voters still have plenty of time to decide which primary candidate to support. Most Democrats and Democratic-leaning independents — 82 percent — said they haven’t made up their minds yet, compared to 17 percent of left-leaning voters said they know who they want to see run for president.

“Democrats want to beat Trump. That’s the goal, and they’re looking for the best candidate to do that,” Democratic strategic Doug Thornell said. “They haven’t made up their minds. They’re window-shopping right now.” 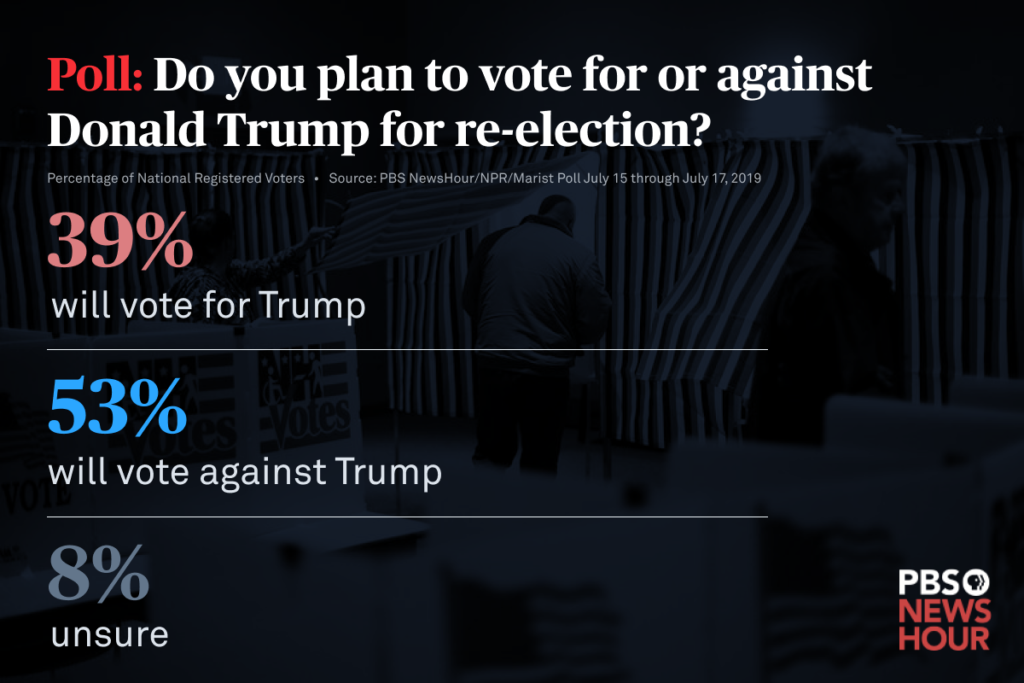 The results signal that independent voters in particular aren’t sold on any of the 2020 Democratic presidential hopefuls or Trump, said Lee Miringoff, the director of the Marist Institute for Public Opinion.

By comparison, voters were split on President Barack Obama in August 2011, the summer leading up to his re-election, according to Marist polling. Forty percent of registered voters said they planned to vote for him, another 40 percent said they would not, and the remaining 20 percent of voters said they were unsure.

This latest Marist poll also asked voters about key issues at the center of the presidential race.

Only 41 percent of Americans said they wanted to replace private health insurance with a government-run program.

And 67 percent of U.S. adults — including a majority of Republicans, Democrats and independents — said the government should regulate prescription drug prices. Fewer than half of U.S. adults, 44 percent, said they want to repeal the Affordable Care Act, also called Obamacare.

Other proposals from 2020 White House hopefuls were less popular. Democratic presidential candidate Andrew Yang has proposed setting up a universal basic income of $1,000 per month for each U.S. adult — but that appeals to just 26 percent of Americans. That includes 42 percent of Democrats and 8 percent of Republicans.

Just 27 percent of Americans overall support paying reparations to the descendents of slaves, though the support was split along party lines; 46 percent of Democrats support reparations, compared to 23 percent of independents and 3 percent of Republicans.

Republican strategist Mike Murphy argued Democratic presidential contenders were “running right for the tricky stuff,” like supporting reparations and decriminalizing the border, that could backfire in a general election.

Republicans “can’t believe their good luck,” Murphy said. Democrats are: “racing to put themselves so far into the corner on these issues that even Trump might be able to beat them.”

Left: Among voters likely to back a Democrat, 54 percent said they want a Democratic candidate who can beat President Donald Trump in the 2020 presidential election.