With the 2020 presidential election already underway, 57 percent of registered voters said they would definitely vote against President Donald Trump, according to the latest poll from the PBS NewsHour, NPR and Marist.

Another 30 percent of voters said they would cast their ballot to support Trump, and an additional 13 percent said they had no idea who would get their vote.

Although the election is still nearly two years away, the large number of voters who oppose Trump as well as his low approval ratings suggest the president faces a “steep, steep incline” in winning re-election, said Lee Miringoff, the director of the Marist Institute for Public Opinion.

“The president has had his base and not much else,” Miringoff added. 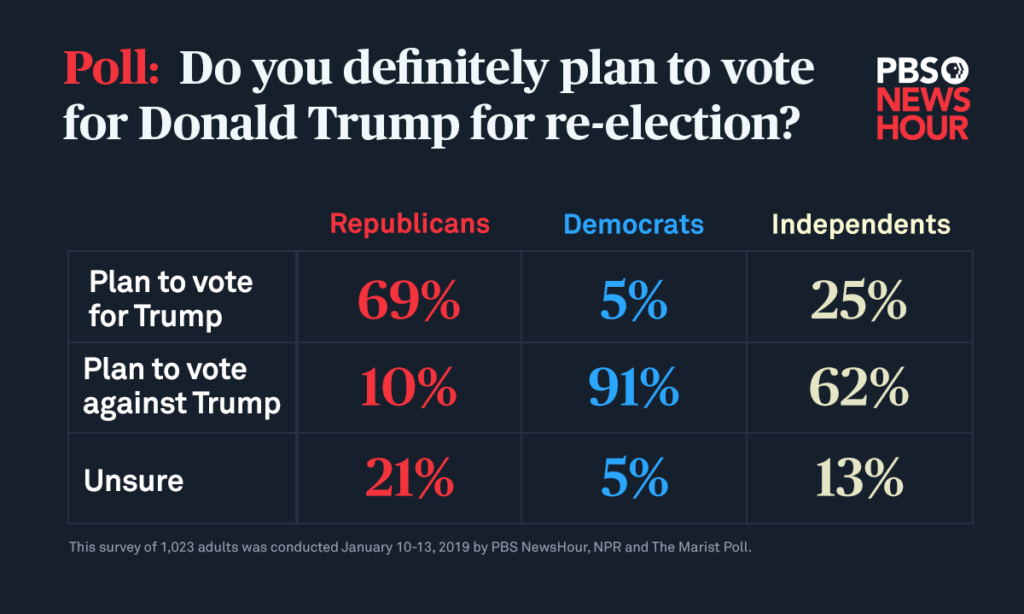 But who would Republicans want to see run against Trump?

According to the poll, 29 percent of Republicans and conservative-leaning Independents said they felt favorable about Sen. Mitt Romney, R-Utah, the 2012 Republican presidential nominee. Another 24 percent said they thought well of former Ohio Republican Gov. John Kasich — but 48 percent of potential Republican voters had no idea who Kasich was, a sign of the challenges most GOP candidates would have in taking on a sitting president from their own party.

Voters’ preferences are no less clear in the Democratic primary field, which is growing quickly ahead of the party’s first primary debates this summer. Sen. Kirsten Gillibrand, D-N.Y., announced Tuesday that she had formed an exploratory committee for president, becoming the latest Democrat to join a field that already features Sen. Elizabeth Warren, D-Mass., and Rep. Tulsi Gabbard, D-Hawaii, among others.

“The president has had his base and not much else.”

When asked about how they felt about 10 Democratic presidential hopefuls, 76 percent of Democrats and Democratic-leaning Independents said they had a favorable view of former Vice-President Joe Biden, followed by 57 percent who felt favorable toward Sen. Bernie Sanders, I-Vt., and another 53 percent who felt positive about Warren.

The early stage of the Democratic primaries comes as Trump awaits the conclusion of special counsel Robert Mueller’s Russia investigation and faces a new challenge from the Democratic-controlled House.

The partial government shutdown — now in its 27th day and the longest in U.S. history — hasn’t helped.

When it comes to the shutdown specifically, 54 percent of respondents said they blame Trump, and another 31 percent blamed congressional Democrats.

Nearly two-thirds of Americans admire elected officials who are willing to compromise despite disagreements with others.

With neither side yielding, nearly two-thirds of Americans admire elected officials who are willing to compromise despite disagreements with others, a slight uptick from April 2017, when 58 percent of U.S. adults said they felt that way. Democrats and people who are politically independent are significantly more likely to say this compared to Republicans.

“What we’re seeing in each of these questions is a sense that compromise is desired and both sides should be working more with the other,” Miringoff said.

A third of U.S. adults support politicians who refuse to back down from their position, down from 39 percent. And a bigger segment of Republicans said they want elected officials who don’t waver, compared to Democrats and Independents.

Left: President Trump delivered a televised address to the nation on the 18th day of the partial government shutdown. Photo by Joshua Roberts/Reuters