Majority of Americans blame Trump for the shutdown

A majority of Americans blame President Donald Trump for the longest government shutdown in U.S. history, according to the latest poll from the PBS NewsHour and Marist.

In mid-December, during a contentious White House meeting over border wall funding with Democratic congressional leaders Nancy Pelosi and Chuck Schumer, Trump said he would take pride in shutting down the government. Since the shutdown began more than three weeks ago, Trump has not relented in his insistence on $5.7 billion in border wall funding from Congress, despite his earlier claims that Mexico would pay for the wall. Trump refused to sign a temporary funding bill that the outgoing Congress offered to keep the government open. 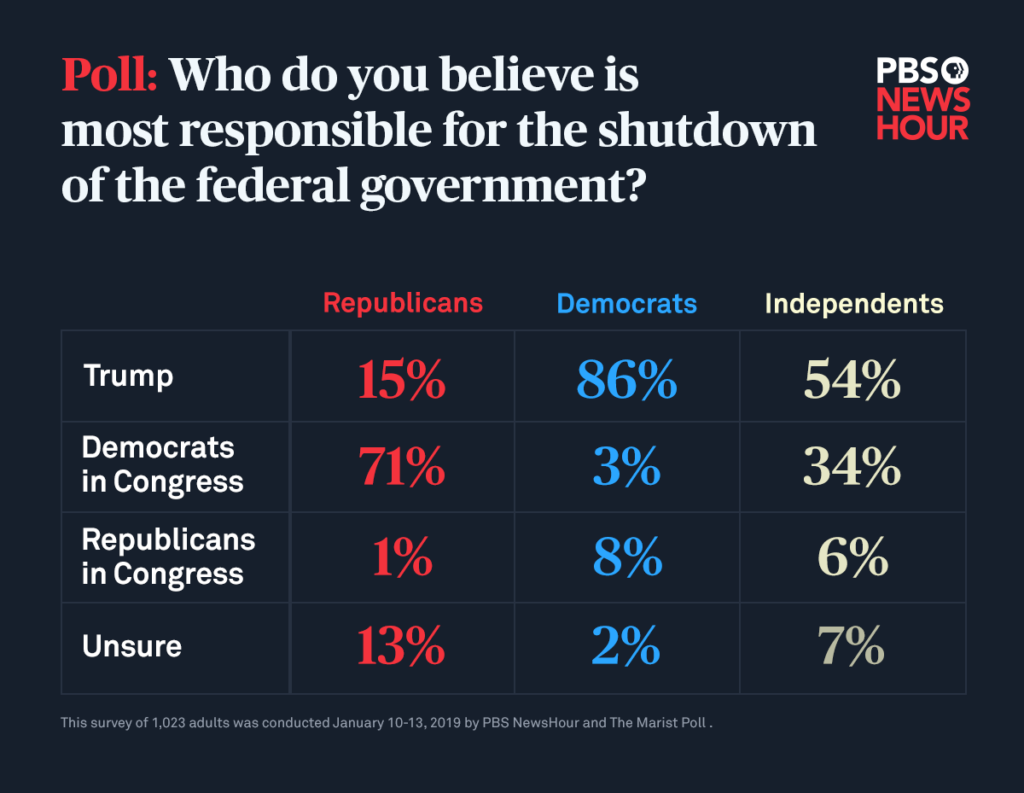 “I can’t tell you when the government’s going to be open. I can tell you it’s not going to be open until we have a wall or fence, whatever they’d like to call it,” Trump said on Dec. 25, according to the Associated Press. More recently, he has resisted a call from his own party to reopen the government ahead of more negotiations with Democrats. He also suggested he would declare a national emergency if negotiations could not break an impasse, allowing him to bypass Congress to get funding for the wall, though he has seemed to back away from that strategy in recent days.

Seventy percent of U.S. adults said it is bad strategy for Trump to bring the government to a grinding halt over a policy disagreement, such as funding for a wall along the U.S.-Mexico border. That includes 96 percent of Democrats, 72 percent of people who identify as politically independent and 35 percent of Republicans.

Now 25 days in, the nation has endured the longest government shutdown in its history, and there is no end in sight. More than 800,000 government workers are either furloughed or working without pay; on Friday, they did not receive their scheduled paychecks.

But the shutdown has caused public disruptions beyond those felt by federal workers. At airports, Transportation and Security Administration workers have launched “sick-outs” in protest, and Miami International Airport was forced to close a terminal as a result. Immigration court hearings have been postponed. Potential homebuyers and sellers have delayed purchases because the federal government could not process loans. And by March, according to the Trump administration, there will not be enough funds to cover Supplemental Nutrition Assistance Program benefits for 42 million Americans who rely on food stamps.

Trump’s base is beginning to crack as the shutdown drags on, this latest poll suggests.

Trump’s base is beginning to crack as the shutdown drags on, this latest poll suggests. A majority of white evangelical Christians, men and U.S. men without college degrees — all groups that voted heavily for Trump over Hillary Clinton in the 2016 election — said shutting down the government over a policy disagreement was a bad idea. Among respondents who said they were Trump supporters in 2016, 30 percent said they could not support that approach.

In the last week, multiple polls have suggested that the public blames Trump and Republicans for the fallout, including 56 percent of Americans in a recent Quinnipiac poll and 53 percent of U.S. adults in an ABC News-Washington Post poll.

This isn’t the first time the public has signaled its disapproval of government shutdowns. In December, a majority of U.S. adults — 57 percent — said they wanted Trump to compromise over the wall along the nation’s southern border rather than shut down the government, according to a poll from the PBS NewsHour, NPR and Marist.

“Shutdowns generally are not very popular,” said Barbara Carvalho, who directs Marist Poll. “It just depends on who ends up owning it.”

Left: President Donald Trump declines to answer a final question from the press as he departs the White House on Jan. 14, 2019. Photo by Win McNamee/Getty Images