8 things you didn’t know about the Confederate flag

Following the massacre in Charleston, South Carolina on Wednesday in which a gunman shot and killed nine people attending bible study at a historic black church, the Confederate battle flag — also called the rebel flag, the southern cross and the Dixie flag  — has been the subject of contentious debate.

Take down the #ConfederateFlag at the SC Capitol. To many, it is a symbol of racial hatred. Remove it now to honor #Charleston victims.

On Saturday, former GOP presidential candidate Mitt Romney took to Twitter to call for the flag’s removal from the grounds of the state capitol in Columbia, South Carolina, and over 400,000 people have signed a MoveOn.org petition demanding that the government of South Carolina remove the flag from “all government places.”

Here are eight things you may not have known about this contentious Confederate emblem. 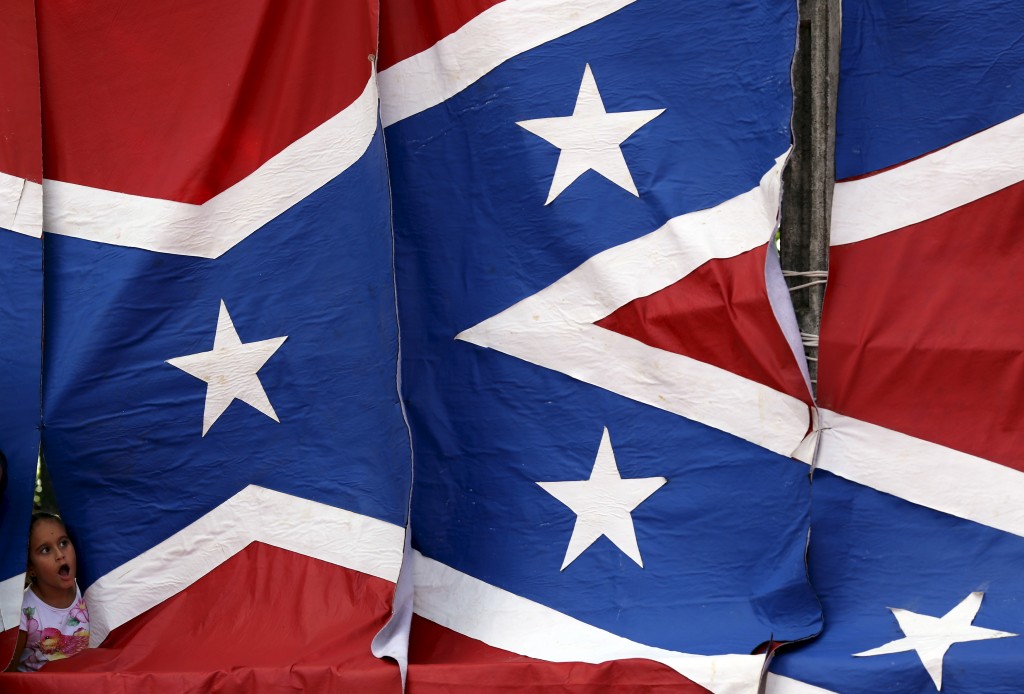 A Confederate flag is seen during a party to celebrate the 150th anniversary of the end of the Civil War, Santa Barbara D’Oeste, Brazil, April 26, 2015. The flag has become the subject of controversy following Wednesday’s racially-motivated mass shooting in Charleston, South Carolina. Photo by Paulo Whitaker/Reuters

1. The Confederate battle flag was never the official flag of the Confederacy.

The Confederate States of America went through three different flags during the Civil War, but the battle flag wasn’t one of them. Instead, the flag that most people associate with the Confederacy was the battle flag of Gen. Robert E. Lee’s Army of Northern Virginia.

Designed by the Confederate politician William Porcher Miles, the flag was rejected for use as the Confederacy’s official emblem, although it was incorporated into the two later flags as a canton. It only came to be the flag most prominently associated with the Confederacy after the South lost the war.

2. The flag is divisive, but most Americans may not care.

Roughly one in ten Americans feels positively when they see the Confederate flag displayed, according to a 2011 Pew Research Center poll. The same study showed that 30 percent of Americans reported a negative reaction to seeing the flag on display.

But the majority, 58 percent, reported feeling neither positive nor negative. The poll also showed that African-Americans, Democrats and the highly educated were more likely to perceive the flag negatively. 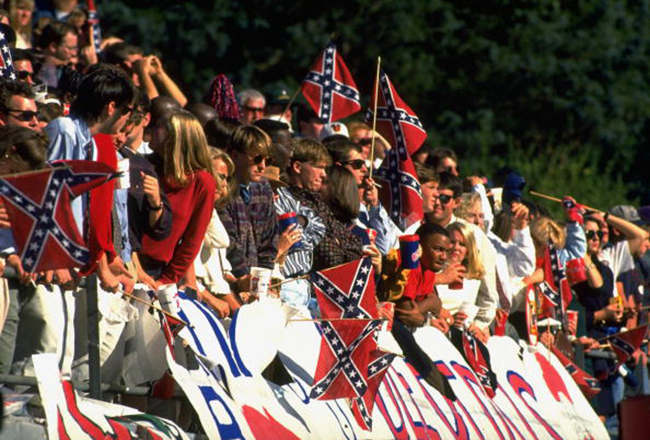 Mississippi fans in stands with Confederate flags during a sporting event in 1993. Photo by Patrick Murphy-Racey/Sports Illustrated/Getty Images

3. The flag began to take on a new significance in the 20th century.

In the immediate aftermath of the Civil War, the battle flag was used mostly at veterans’ events and to commemorate fallen Confederate soldiers. The flag took on new associations in the 1940s, when it began to appear more frequently in contexts unrelated to the Civil War, such as University of Mississippi football games.

In 1948, the newly-formed segregationist Dixiecrat party adopted the flag as a symbol of resistance to the federal government. In the years that followed, the battle flag became an important part of segregationist symbolism, and was featured prominently on the 1956 redesign of Georgia’s state flag, a legislative decision that was likely at least partly a response to the Supreme Court’s decision to desegregate school two years earlier. The flag has also been used by the Ku Klux Klan, though it is not the Klan’s official flag. 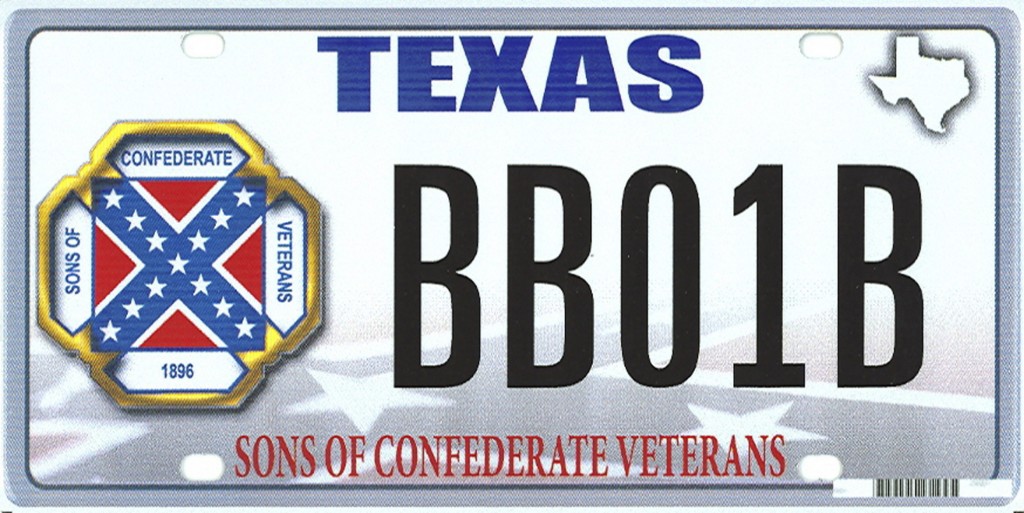 In a 5-4 decision, the court ruled against the nonprofit Sons of Confederate Veterans in Texas. The group had applied to create a specialty license plate that featured the battle flag and argued that Texas’s licensing board violated their First Amendment rights by denying the application. Although the ruling came the day after the massacre in Charleston, the court heard arguments in the case in March.

5. The NAACP has long led a boycott against South Carolina because of the battle flag on display at the capitol.

The National Association for the Advancement of Colored People has led an economic boycott of South Carolina for years. In 2000, activists managed to have the flag moved from the dome of the capitol building to a memorial to Confederate soldiers nearby on the Statehouse grounds, but the boycott remains in effect.

“One of the ways we can bring that flag down is by writing to companies, engaging companies that are thinking about doing business in South Carolina, speaking to the governor, speaking to the legislature and saying the flag has to come down,” Brooks said, according to the Charleston City Paper.

The NCAA also has a partial ban on sporting events in South Carolina because of the state’s decision to display the flag. 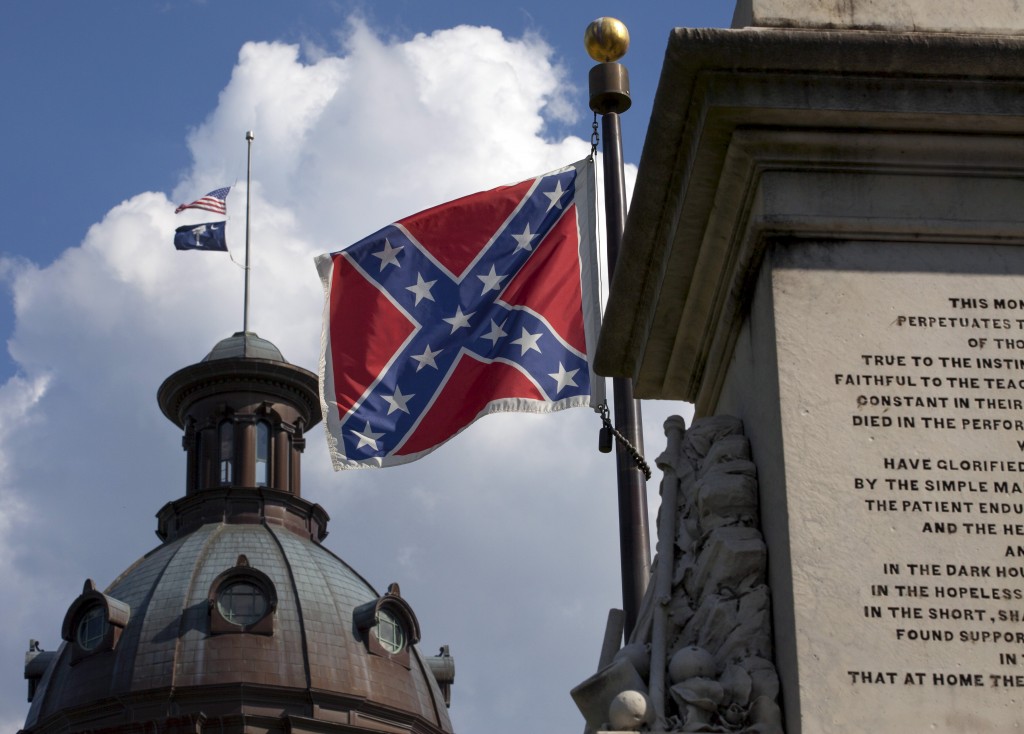 The U.S. flag and South Carolina state flag flies at half staff to honor the nine people killed in the Charleston murders as the confederate battle flag also flies on the grounds of the South Carolina State House in Columbia, SC June 20, 2015. Photo by Jason Miczek/Reuters

Although the American flag and South Carolina state flag were lowered in mourning for the victims of the church shooting, the Confederate flag on display at the statehouse was not, because it is affixed to the flag pole and cannot be lowered, it can only be removed, The Washington Post reported.

7. Five Southern states have legal protection for the flag, but California bans it.

Florida, Mississippi, Georgia, South Carolina and Louisiana all have laws on the books that ban desecration of the Confederate flag. The laws are unenforceable, though, because the Supreme Court has ruled that desecrating a flag is protected by the First Amendment.

California passed a bill in 2014 that banned the state government from displaying or selling merchandise bearing the Confederate flag.

8. Mississippi is the only state whose flag still features the battle flag.

Mississippi is the only state whose flag still contains the confederate flag since Georgia changed its flag in 2003. In a statewide referendum in 2001, Mississippians voted 2-to-1 in favor of keeping the flag, which features the Confederate emblem as a canton in the top left corner.