Voters stood in lines across the island under a harsh sun, some nibbling on cookies or fanning themselves. Some arrived up to three hours early, eager to participate in an election featuring six gubernatorial candidates.

An elderly man slowly walked past one long line, raised his cane and shouted, “Let’s vote for our homeland!” as those around him cheered.

Among those candidates is Pedro Pierluisi of the pro-statehood New Progressive Party, the territory’s former non-voting representative in Congress who briefly served as governor following huge street protests last year that led to the resignation of Gov. Ricardo Rosselló.

WATCH: Puerto Rico gears up to vote in statehood referendum this November

A majority of polls gave Pierluisi a slight lead over Carlos Delgado of the Popular Democratic Party, which supports the island’s territorial status. Lagging behind were Juan Dalmau of the Puerto Rican Independence Party, Alexandra Lúgaro of Citizen Victory Movement, César Vázquez of the Dignity Project and independent candidate Eliezer Molina.

Among those in line was 61-year-old María Peralta, a maid whose main concern is public transportation because she sometimes must walk 45 minutes to work. Nearby stood Miguel Ángel Velázquez, a 64-year-old handyman who said the candidate he chose has a platform he feels will boost the economy and help lift people out of poverty.

“The situation in general here in Puerto Rico is chaotic,” he said.

In the race to become the mayor of Puerto Rico’s capital, three candidates are vying to replace San Juan Mayor Carmen Yulín Cruz, known for sparring with U.S. President Donald Trump after Hurricane Maria hit the island in September 2017, causing damages estimated at more than $100 billion and killing an estimated 2,975 people in its aftermath. 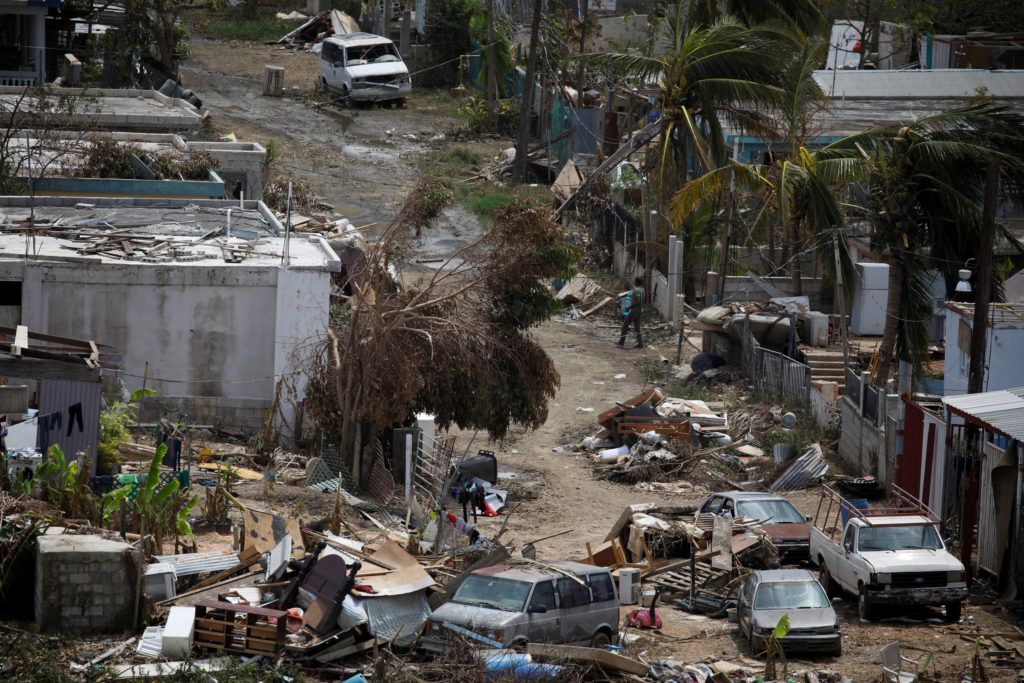 FILE PHOTO: A man carrying a water container walks next to damaged houses after the area was hit by Hurricane Maria in Canovanas, Puerto Rico, September 26, 2017. REUTERS/Carlos Garcia Rawlins/File Photo

Less than two years after the storm, hundreds of thousands of Puerto Ricans took to the streets to demand the resignation of Rosselló in an event known as the “Summer of 2019,” a movement sparked by a leaked chat in which the then governor and other officials made fun of hurricane victims, among other things, and made comments that led to an investigation into possible corruption.

The new candidates are promising to fight corruption and turn the island around at a time of economic crisis and efforts to restructure a portion of Puerto Rico’s more than $70 billion public debt, which officials declared unpayable in 2015.

Whoever wins will have to work alongside a federal control board that oversees Puerto Rico’s finances and has previously clashed with local officials over austerity measures, including proposed public pension cuts.

Candidates also face a dwindling voter base because of emigration caused by hardship. There are 2.36 million eligible voters, compared with 2.87 million in 2016 and 2.4 million in 2012.

Also on the ballot are local legislative races and the island’s sixth referendum on whether to change its current territorial status. They will be asked one question: “Should Puerto Rico be admitted immediately into the union as a state?” The vote is advisory as Congress would have to approve that happening.

Some Puerto Ricans have welcomed the increasing diversity of parties and candidates in recent years, which has slowly eroded the grip that the New Progressives and Popular Democrats have had on the island’s politics for decades.

On Sunday, he stood near a stoplight in his hometown of Guayanilla, a community on the island’s southwestern coast that was among the hardest hit by a series of damaging earthquakes that began late last December. He was alone and carried a poster that read, “Why would you choose the same thing? Vote,” as cars around him honked in approval.

Political analyst Mario Negrón said he wasn’t surprised by the protests or the demand for new parties and faces as the island’s infrastructure deteriorates, administrations of the two main parties keep losing credibility and an exodus to the U.S. mainland continues.

“It’s obvious this was going to be the end product,” he said. “Puerto Rico’s public administration collapsed a long time ago. … The question is, Now what?”

Left: FILE: The flags of the U.S. and Puerto Rico fly outside the Capitol building in San Juan, Puerto Rico May 4, 2017 Photo by Alvin Baez via Reuters.