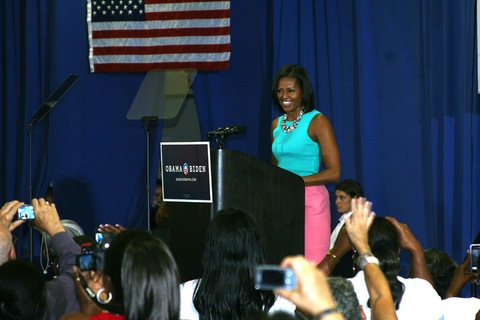 Michelle Obama makes the case for her husband’s re-election campaign at an event in Dale City, Virginia. Photo by Cassie M. Chew.

After a stampede of surrogates left President Obama’s talking points trampled by the wayside over the past few weeks, the president turned to the one person he knew he could trust to deliver his message to voters in the battleground state of Virginia: his wife Michelle.

In Northern Virginia on Thursday afternoon the first lady tried to put the luster back into the president’s campaign. Ms. Obama took to the stump at the VFW Post 1503 in Dale City, a small suburban enclave in Prince William County, where she spoke before a group of 745 volunteers and supporters.

Following an introduction by Lisa Collis, the wife of former governor and current Senator Mark Warner (D), Ms. Obama took to the podium amidst chants of “four more years.” And where Bill Clinton, Larry Summers and Cory Booker disappointed, Michelle Obama succeeded, staying on message to deliver an eloquent endorsement of her husband’s policies and re-emphasizing the campaign’s forward leaning message of four years ago.

“We believe that responsibility should be rewarded, that hard work should pay off,” she said. “We believe that everyone should do their fair share and play by the same rules.”

Often seen as the more personable side of the Obama family, Ms. Obama shared stories of her childhood with the gathered crowd and referred to her husband affectionately as “Barack.”

“And from now until November, Barack needs all of you to get out there and to tell everyone you know about the values that we share. Tell them about our vision. Tell them about everything that’s at stake in this election. ”

With Mr. Obama away attending a pair of events on the West Coast, and on the heels of a disappointing loss for his party earlier in the week in Wisconsin’s recall election, the first lady stayed focused on the president’s accomplishments: healthcare reform, the end of the war in Iraq, the killing of Osama bin Laden, student loan reform and the auto industry bailouts.

“He had the backs of the American workers. He put his faith in the American people,” she said of the auto bailouts. “The auto industry is back on its feet again, and more importantly, people are back at work, providing for their families again.”

Ms. Obama’s schedule has been full in recent weeks. She recently released her own cookbook, “American Grown: The Story of the White House Kitchen Garden and Gardens Across America,” and has appeared at over a dozen campaign events this year, but the stop in Northern Virginia on Thursday marked one of the first solo stops on the trail this year. In 2008, Ms. Obama maintained a heavy campaign presence, making over 50 appearances that fall to help solidify her husband’s victory.

Wrapping up her 20 minute speech, the first lady implored the gathered group of supporters to reach out to those on-the-fence voters who may decide the election which “will be closer than the last one.”

“Remember, this journey is going to be long,” she told the crowd. “And it is going to be hard. And there will be plenty of twists and turns along the way, but just know, that is how change – real change – always happens in this country.”

The president won Virginia in 2008 by a seven point margin, 53 percent to 46 percent, over Sen. John McCain. He also won Prince William County by 16 points.

In 2012, Prince William County has been determined by the NewsHour to be one of the key swing counties in the state and we will have more reporting from Prince William as the campaign continues.

On her way back to Washington, Ms. Obama took a side trip to the small town of Occoquan to visit Mom’s Apple Pie Company where she purchased a pair of pies – their signature apple and sour cherry, described as “a real man’s pie” – to take home to the first family.

“She is so wonderful and I was so thrilled to be here. She signed my cookbook,” Joanne Ruffner of nearby Woodbridge said with a wide smile after Thursday’s event. The Obama campaign hopes voters like Ms. Ruffner will be part of its recipe for success in 2012. 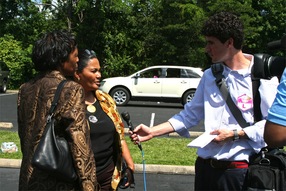