Two-thirds of Americans say the federal government has not done enough to ease the economic hardships brought on by the coronavirus pandemic, according to the latest PBS NewsHour/NPR/Marist poll.

With a number of coronavirus relief programs set to expire at the end of the year, 40 percent of Americans say they or someone in their household has lost a job or income due to the coronavirus. Congressional efforts to extend billions of dollars in aid to struggling Americans have been deadlocked for months, despite the fact that 66 percent of Americans say it is more important for government officials to compromise to find solutions than to stand on principle, even if that means gridlock. Late Tuesday, Treasury Secretary Steven Mnuchin said he had discussed a $916 billion COVID-19 relief plan with House Speaker Nancy Pelosi that would reportedly include a one-time $600 payment to most Americans but would not revive an enhanced $300 per week unemployment benefit.

But the economic fallout from the pandemic is far from the only impact. More than two-thirds of Americans also say they or someone they know has been sick with the virus, as new cases surge by sometimes more than 200,000 per day across the United States. Deaths from COVID-19 have topped 286,000 in the U.S., and more than 100,000 people are currently hospitalized. Strained health care systems are running out of room and staffing to treat patients — numbers that experts expect to grow due to Thanksgiving gatherings and travel despite pleas from a once-muted Centers for Disease Control and Prevention that people stay home.

For months, public health officials have urged people to practice social distancing, avoid indoor gatherings, wash their hands and wear masks, warning that catastrophic outcomes awaited them if they did not heed the advice. After dipping in October to 65 percent, public support for a national mask mandate has risen significantly, to nearly three-quarters of all U.S. adults. 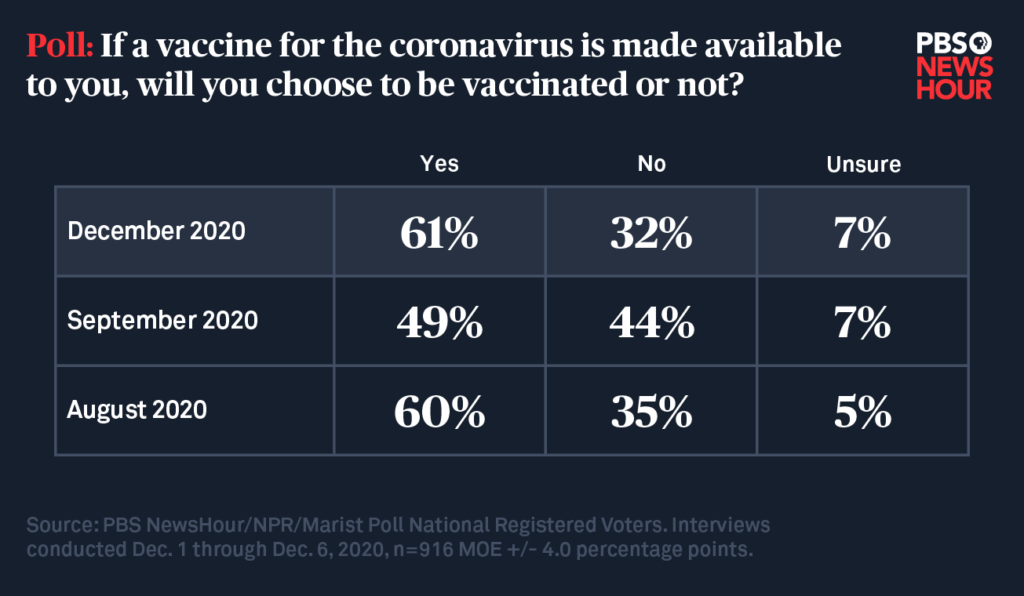 A majority of Americans — 61 percent — also said they would get vaccinated against the coronavirus, up from 49 percent in September. That boost in confidence is likely driven not just by the deepening crisis, but by the long-awaited positive news that two pharmaceutical companies, Pfizer and Moderna, have applied for emergency authorization in the U.S. for their vaccine candidates. AstraZeneca has also released data showing its vaccine has an efficacy of about 70 percent. On Tuesday, the United Kingdom began vaccinating people against COVID-19, and U.S. officials say vaccination campaigns could launch in December for health care workers and nursing home residents.

To reach herd immunity, experts at Johns Hopkins University generally suggest between 50 and 90 percent of the population needs to be vaccinated, depending on how contagious a disease is. The CDC said recently that it is unclear exactly how many people need to get a COVID-19 vaccine to achieve that level of protection. 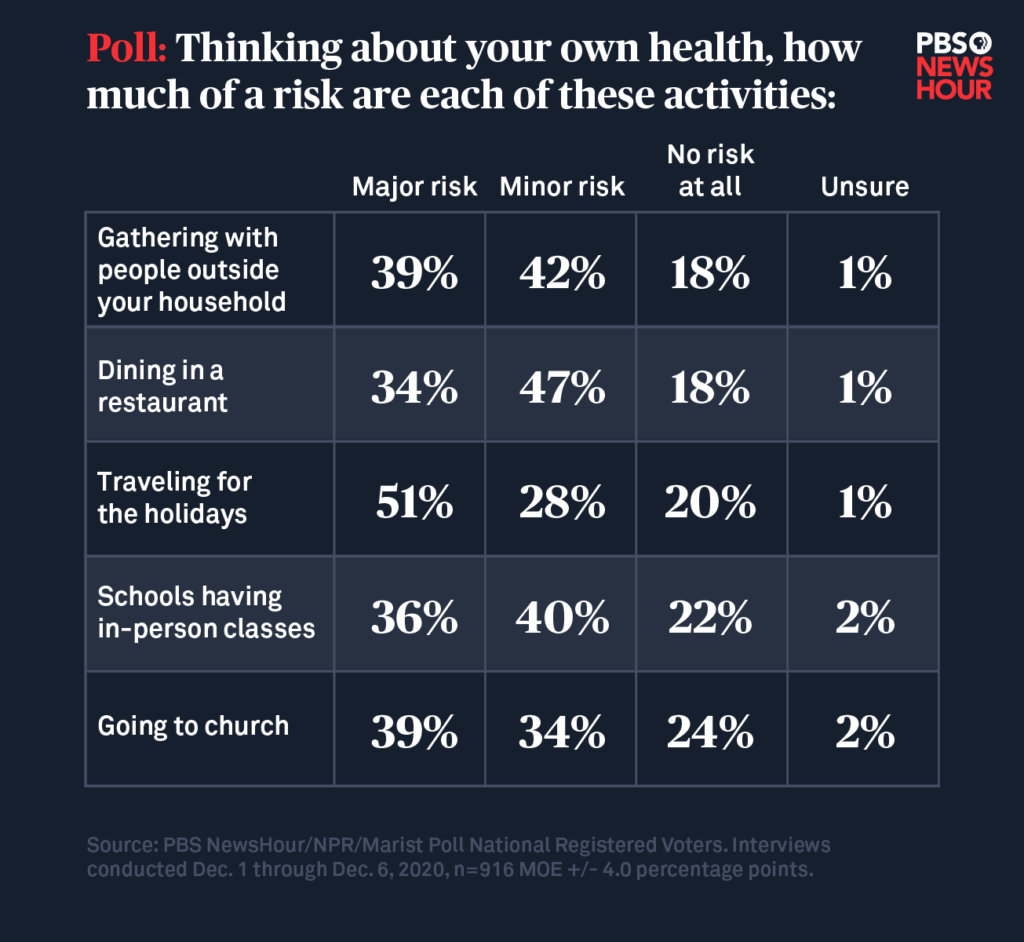 It will take months before enough people are inoculated to make a difference and regain control over the virus. Until then, said Dr. Leana Wen, a professor at George Washington University and an emergency physician, it is distressing that the latest poll shows that Americans are split by political party on whether or not it is safe to travel for the holidays or attend church services, which research has linked to superspreading events.

The U.S. is “in for an extremely difficult winter,” Wen said. “We could end this pandemic by 2021 — within the next year — but we need to stay alive until then.”

It is encouraging that more Americans want to get vaccinated, said Dr. Carlos Del Rio, distinguished professor of medicine at Emory University School of Medicine. But “we need to continue giving the right message and increase trust in the vaccine.”

Those messages need to target doubts and concerns in “minority communities,” he said, which have been put at a disadvantage by generations of structural racism. The disproportionate impact of the coronavirus on communities of color is “unacceptable,” he said. According to the latest poll, 58 percent of non-white respondents said they would get vaccinated, while 64 percent of white respondents said the same.

During President Donald Trump’s last weeks in office, a majority of Americans — 59 percent — said they disapprove of his handling of the coronavirus pandemic, suggesting little change since April in how most people perceive his leadership. That includes 95 percent of Democrats and 63 percent of independents. Another 37 percent of Americans approve of the way Trump has handled the pandemic response, including 82 percent of Republicans. Overall, 50 percent of Americans approve of his job as leader during one of the most fraught times in the nation’s history, with an economic recession, social and racial unrest and a heated election churning the country, on top of the pandemic.

On Tuesday, President-elect Joe Biden introduced the team he is tapping for key health leadership roles, including Dr. Rochelle Walensky, chief of infectious diseases at Massachusetts General Hospital, to direct the CDC. Biden also affirmed that he would ask all Americans to voluntarily mask up for the first 100 days of his presidency and committed to dispensing 100 million vaccines nationwide — measures that seem to have broad support.

Del Rio said the transition team has made promising choices so far, but much more must be done to flatten the curve after Biden is inaugurated. 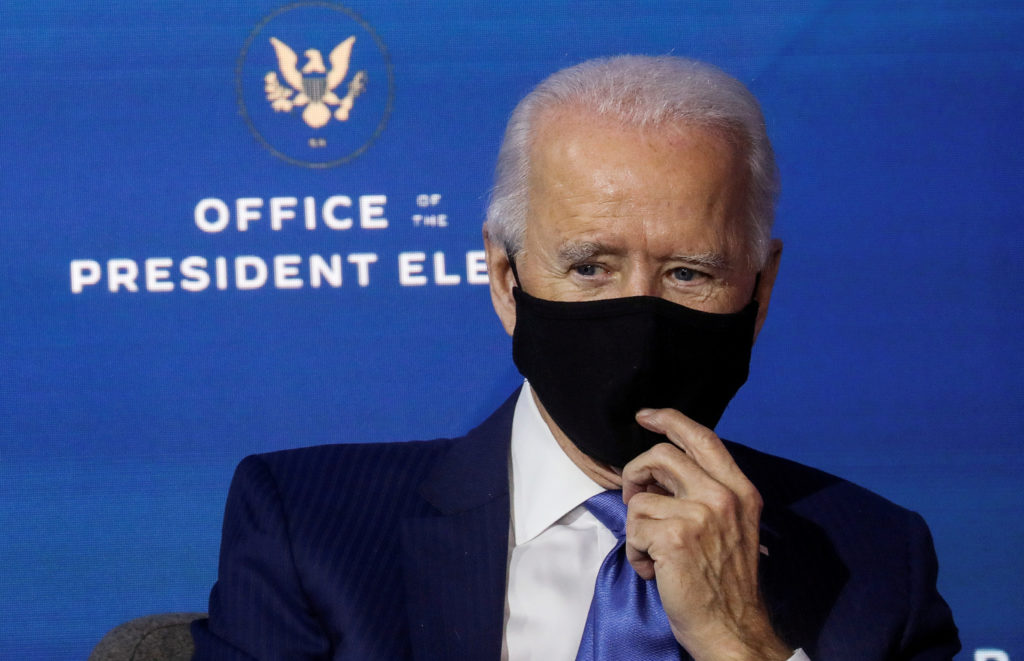 Unlike every other transition period since the nation’s founding, this one has been beset with false claims from the outgoing president himself, who declared that he won the election and has alleged widespread voter fraud without any evidence to support his claims. 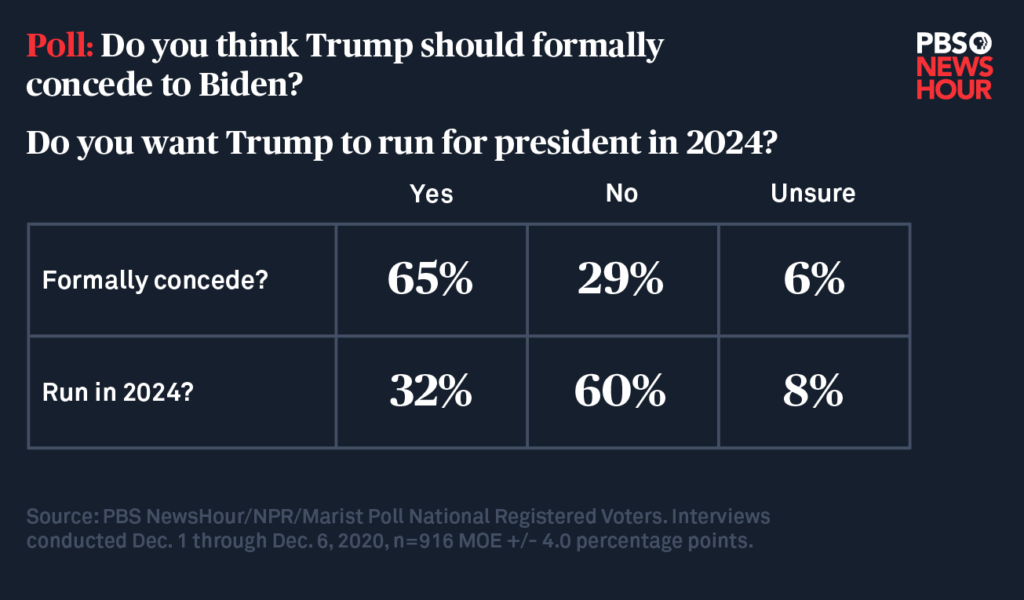 Looking across American history, this transition period is without precedent, according to presidential historian Michael Beschloss. The first transfer of power from one U.S. political party to another occurred in 1800 when Democratic-Republican candidate, Thomas Jefferson, defeated Federalist incumbent John Adams. The outgoing president skipped the Inauguration, boarded a stage coach and returned to Massachusetts, Beschloss said. But handing over power without a major skirmish set an example of how U.S. presidents transition from one administration to the next that has been followed for two centuries.

“One of the unique features of American democracy has always been that we transfer power peacefully, especially between candidates of different parties,” Beschloss said.

It hasn’t always gone smoothly. Before 2020, the most controversial presidential transition in modern history took place in 2000. An extremely close race and a contentious vote recount in Florida ultimately led to the Supreme Court ruling a month after the election that then-Republican candidate George W. Bush had defeated Democratic contender Vice President Al Gore, which resulted in a shortened transition period. Some historians believe that delay of the transition process by a few weeks contributed to the Bush administration’s failure to recognize and intercept threats of domestic terrorism ahead of the Sept. 11, 2001, attacks, Beschloss said.

The transition between the Trump and Biden administrations has been far more turbulent. Trump has refused to publicly concede his loss to Biden, and his campaign has launched dozens of investigations to contest the election results and cast doubt on the democratic process. In Georgia, Trump attorney Lin Wood even discouraged voters from participating in the Senate runoffs in January, which he called “another rigged election,” demanding that state officials must “fix it.”

In this latest poll, 65 percent of U.S. adults said Trump should formally concede to Biden. That includes 93 percent of Democrats, 75 percent of independents and 31 percent of Republicans.

The practice of top leaders questioning the entire election process is more often seen in non-democratic countries, Beschloss said, and contradicts what the U.S. typically advises other nations on how to conduct voting and the peaceful transfer of power.

“President Trump is trying to poison the well,” Beschloss said.

Members of Trump’s own administration, including Attorney General William Barr, have said they have found no evidence of widespread election fraud. Christopher Krebs, the nation’s top cybersecurity official at the Department of Homeland Security, defended the election’s integrity against Trump’s false claims of voter fraud, tweeting “America, we have confidence in the security of your vote, you should, too,” before Trump fired him five days later.

It is unusual for the general public to pay close attention to presidential transitions, said Max Stier, president and CEO of the Partnership for Public Service, which oversees the nonpartisan Center for Presidential Transition. He compared the process to driving on a bumpy road that requires regular maintenance, and “we generally don’t pay attention to things that appear to be going along smoothly.” 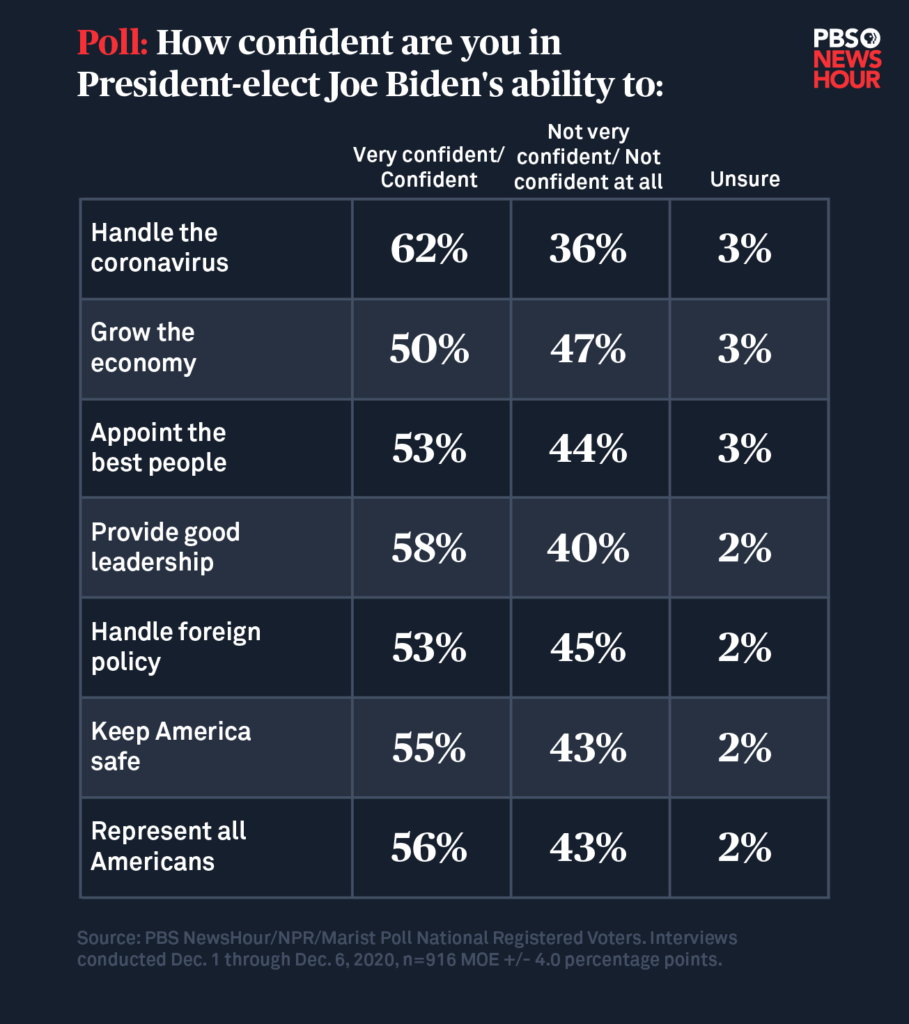 Through messaging, Biden has started to lay the groundwork for his efforts toward greater national unity. In his acceptance speech, he stressed that he was going to serve as president of all Americans, not just the ones who voted for him. That work may be gaining notice with the 56 percent of registered voters who say they approve of what Biden has done so far during the transition period.

In the long run, this period could be a good thing for American democracy, Stier said. If the country has a contested election, that shouldn’t interfere with the cooperation that should reflexively happen between a challenger and a new president, he added, because what is at stake “is so fundamental.”

“This is all about our health and safety. This is not some academic exercise,” Stier said.

Left: People line up with carts at a food bank in Los Angeles on Nov. 19, 2020. Photo by REUTERS/Mike Blake